Note: After WW I, Austria lost South Tyrol to Italy. Most geographical features only had a German name, but during the Italianization period they all received an Italian one.

The first time a feature is mentioned in this article, both names are given, German first. For the sake of readability, only one name is used after that. Furthermore, occasionally the English translation is used instead.
By elevation, Stutennock / Cima di Riva doesn't rank high on the list of peaks in the Rieserferner Group, but its prime setting more than makes up for that. It towers over a thousand meters over the nearby village of Rein in Taufers / Riva di Tures, and in addition to the great outlook down the Reintal / Valle di Riva, it offers excellent views of all the high peaks in the northern half of the group. And you don't even need to go all the way to the summit to enjoy a fine panorama: there is an easy to reach scenic viewpoint on the south ridge, marked by a simple cross, at around 2500 m. 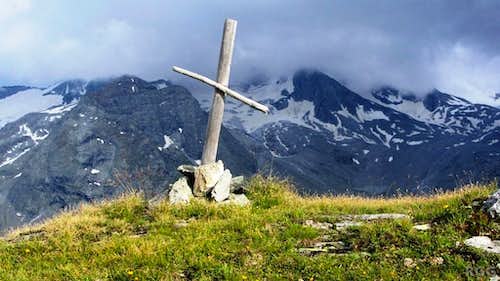 Scenic viewpoint on the Stutennock south ridge. Unfortunately the weather wasn't fully cooperating: the summit of Hochgall is covered in clouds. 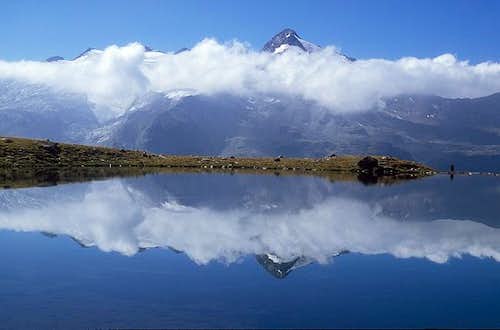 Schneebiger Nock reflected in one of the Kofler lakes
Although there are no more than traces of a trail to the summit, there are clear, signposted trails to the nearby Kofler Lakes, a popular hiking destination directly southeast of the mountain. And from the shores of the southernmost lake it's only about 50 m up to the crest of the south ridge to the aforementioned scenic viewpoint.

Three ridges meet on the summit.

Stutennock from the east, showing the sheer E face and the NE and S ridges. On the right is the Sossenjoch, and just left of the center are the Kofler lakes.
To the northeast, a jagged and narrow ridge stretches for about 700 m to the Sossenjoch (2597m). This is the saddle with Sosseneck / Costa del Sass (2950m), Stutennock's parent peak, giving it 140 m prominence. 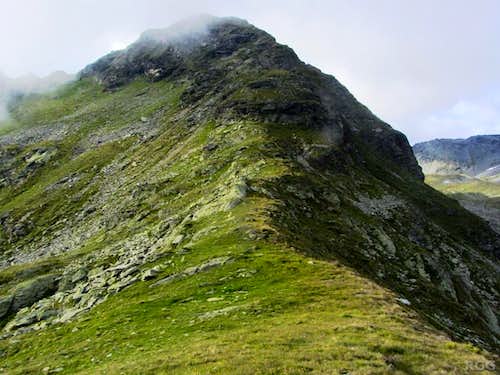 View up the south ridge
A second ridge starts out to the south, partly steep and narrow higher up, but gentler and widening lower down before reaching the viewpoint some 700 m from the summit. Beyond that point the ridge turns southwest and soon becomes jagged and narrow again, before eventually fading away in the steep lower slopes in about half a kilometer.

The third and longest ridge leads west by southwest, eventually dropping all the way down to the Reintal after more than 2 km.

Between these ridges are three concave slopes, roughly north, east and southwest. The top of the east face is quite steep. The easiest route to the summit combines the south ridge with the southwest slopes.

Summit view, with the west ridge right of center, and, way down below, the green pastures of the Reintal

The nearest train station is in Bruneck / Brunico, a small city in the Pustertal / Val Pusteria with a lively and scenic old center. Lots of buses head north to Sand in Taufers / Campo Tures, located at the junction of the Tauferertal / Val di Tures, Ahrntal / Valle Aurina and Reintal. From there, during the day a few buses go to Rein in Taufers, but when I came down from the mountain shortly before sunset, I learned that the last bus back had already left hours before. For more information, see Südtirol Mobil / Mobilità Alto Adige.


Google Street Map, centered on the Knuttental trailhead. Switch to Satellite View and zoom in for a clear view of the parking area. Click here for a larger map.

From the North
Enter Italy over the Brenner / Brennero Pass. Shortly past Franzensfeste / Fortezza and before Brixen / Bressanone, leave the motorway for the E66 to Bruneck and the Pustertal.

Take the exit Bruneck West and drive into the town. From the center take the SS621 north to Sand in Taufers, and right past the town turn east to Rein in Taufers. For the Knuttental / Valle dei Dossi trailhead, drive through the village to the large parking area at the end of the road.


From the South
From Bozen / Bolzano head north on the Brenner motorway. Shortly past Brixen and before Franzensfeste leave the motorway for the E66 to Bruneck and the Pustertal.


From the East
Drive down the Pustertal along the E66 to Bruneck. Take exit Bruneck Ost. 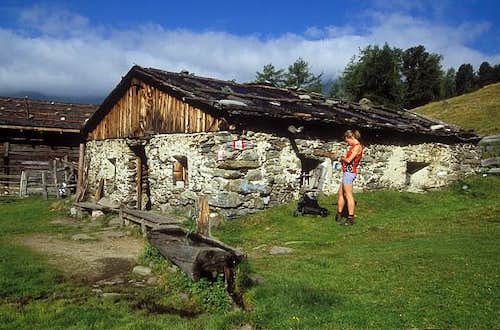 An old guidebook (see below) has one short route description, ascending the southwest flank directly from the Untere Kofleralm (2034m). In distance, this is the shortest way up. However, the catch is that his means an elevation gain of 700 m hiking off-trail. Some 150 m of these are in a pine forest; the rest above the tree line on mostly grassy slopes, mixed with more and more rocks higher up. Since trails are much easier going, I recommend a different route, at least for the ascent.

The Kofler Lakes, a collection of scenic small mountain tarns, are a popular destination for a short day hike. From the most convenient trailhead, the parking area at the start of the Knuttental (±1680m), there are two routes to get there. The northern route takes slightly longer than the southern one. The two can easily be combined into a circuit, circumnavigating Stutennock in the process. Hiking the circuit takes about five hours, adding a side trip to the summit adds less than two. 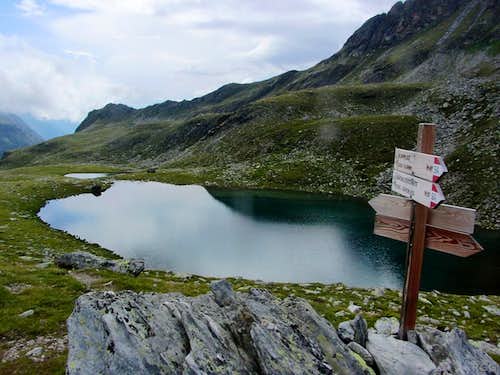 Signpost at the shores of the northernmost lake
Starting out to the north, the route initially follows the private road up the Knuttental. After less than a kilometer, at a signposted junction, turn right on a steep trail (nr 9B) heading east. It leads to the Sossenalm and beyond to the Sossenjoch. At 2597 m, this will be the highest point for those hiking the circuit without climbing the mountain.

From the saddle it's a short hike to the south to reach the Kofler Lakes. The trail passes immediately east of the northernmost one (2439m), which, though hardly more than 100 m long and wide, is also the largest. After that, the trail continues south, but to climb the mountain you'll have to head west somewhere to gain the crest of the south ridge. There are some vague trails in the area, but you can pick your own route. Aim for a fairly flat part of the crest, well left of where the south ridge gets steep. In a few of trip reports I read that somewhere along the trail there would be a big red sign pointing towards the south ridge, but I didn't see it. I presume that I left the trail before I got there.

Up on the crest, on the fairly flat part, it's easy to follow the ridge itself for a while. Higher up it gets steeper and rockier, and the rock quality isn't very good, making it easier to leave the ridge and continue on the southwest slopes instead. 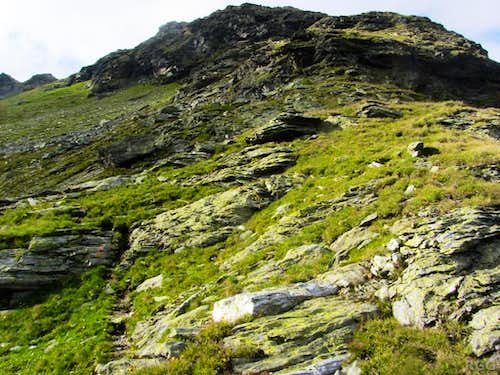 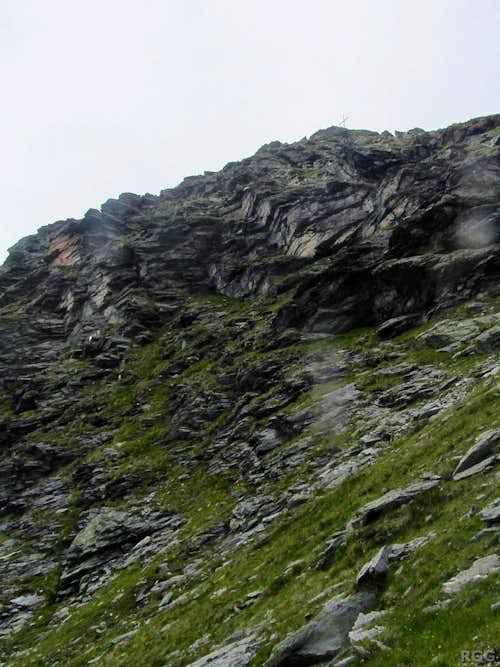 Zooming in on the Stutennock summit cross, from the SSW
High on the southwest slopes, with the summit cross in sight, you can aim just a bit to its right, and cover the final meters on the south ridge again.

Higher up you may occasionally want to use a hand. 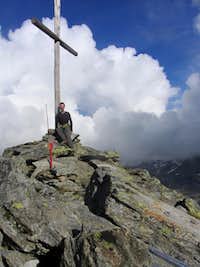 On the summit
On the descent, when you've come back to the point where you gained the south ridge, you have to drop of the ridge again - not necessarily at the same point or by exactly the same route. In fact, on my way up I didn't see any trails between the lakes and the crest. On the descent I saw an obvious trail and followed it for a short while - but on the plateau it soon faded away.

The plateau not only hosts the Kofler Lakes, but also an inland delta of small streams. Eventually they all join together at the south end of the plateau to form the Koflerbach. The trail more or less follows this stream down the mountain for a while. Consequently it doesn't matter much how you get down from the south ridge, as long as you get on the plateau. Even in foggy conditions, just follow any of the streams and eventually you will stumble upon the trail.

South of the plateau, the trail rapidly descends to the Obere Kofleralm (2192m) (private, no refreshments) where it joins the Arthur-Hardegen-Weg (trail 8A) at a signposted junction. Turn right, which brings you past the Untere Kofleralm (2034m) (also private) and lots of twists and turns later you'll eventually get back to the Knuttental trailhead, arriving from the south.

The mountain is located in the Rieserferner-Ahrn Natural Park, but no special restrictions apply. Camping is not allowed, high alpine bivvies are. 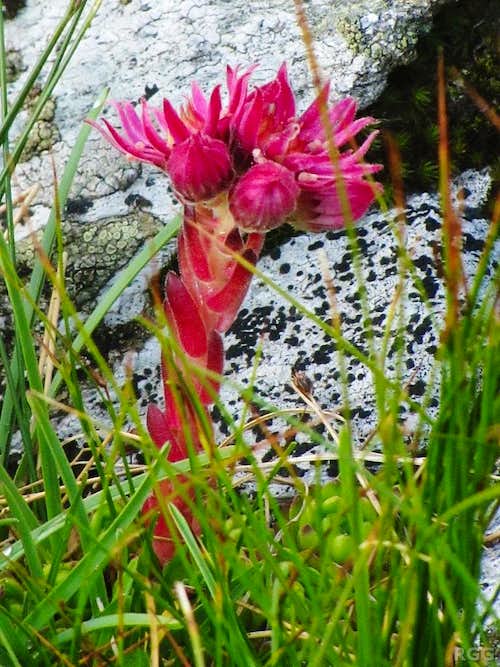 Flowering houseleek high on the slopes of Stutennock
Best from late spring to early autumn.

Early in the season, with enough snow on the mountain, I reckon that the descent down the southwest flank to the Untere Kofleralm must be shorter and faster; perhaps even a long glissade down to the tree line would be possible. Please leave an addition or comment if you've done this. 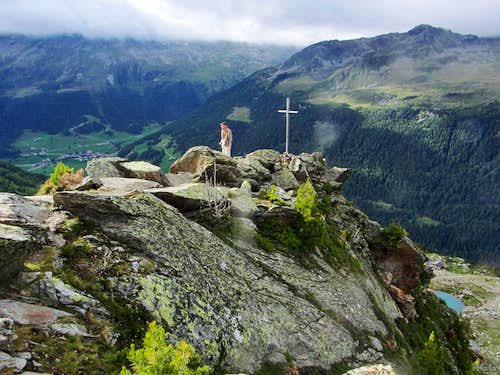 A distant view of Stutennock (on the right) from the summit of Tristennöckl. The Kasseler Hütte is barely visible, close to the small lake on the right.
The area attracts lots of tourists, and consequently Rein offers a lot of accommodation options, as do many of the villages lower down. However, there is no nearby campground.

The nearest mountain refuge is the Kasseler Hütte / Rifugio Roma. It's a nice place, but as it lies a lot further from the mountain than Rein itself, staying there when climbing Stutennock only makes sense on a multi-day trip. Fortunately, there are many possibilities to do that. Here is just one suggestion for two days from Rein:

Day 1
Climb Stutennock and descend to the Obere Kofleralm. Now, instead of turning right to Rein, turn left and follow the Arthur-Hardegen-Weg to the hut.

Rieserferner Gruppe (Alpenvereinsführer), Werner Beikircher, 1983, Bergverlag Rother. ISBN 978-3-7633-1227-6. In German and out of print.
I looked at this guidebook at the public library in Bruneck. It certainly wouldn't be worth buying a second hand copy for Stutennock alone, but, although somewhat outdated, it's still useful when exploring more of the area.

Rein in Taufers
A trip report (in German)