Dreieckspitze / Triangolo di Riva is one of the many summits on the border ridge between Austria and Italy, which surrounds the Ahrntal Valley / Valle Aurina in South Tyrol / Alto Adige. The border also is the boundary between two National / Natural Parks, Nationalpark Hohe Tauern on the Austrian Side and Naturpark Rieserfernergruppe / Parco Naturale Vedrette di Ries on the Italian one. It belongs to the Rieserferner Group of Hohe Tauern and can be reached only from the Italian side.

The Dreieckspitze (sometimes written Dreieggspitze) derives its name from its shape: a perfect triangle which can be easily climbed from almost all sides. It thus is one of the easiest 3000m summits of Hohe Tauern. The three normal routes to the summit all start from Rein / Riva di Tures and differ only in the long ascents to the Baerenluegscharte Pass, 150m below Dreieckspitze. All are technical easy scrambling ascents, the upper 500m of which are strenuous scrambles along scree and rock fields. Though the distances are relatively short you have to acoount for relatively long ascent times.

Along the ascent routes you can find a couple of very beautiful (and also beautifully located) lakes, perfect to look at and perfect to lookout from. And since we are speaking of looking out: Dreieckspitze itself is a perfect lookout peak. To three sides the neighbouring summits are lower and only towards the southwest the border ridge gets higher and culminates in Hochgall / Colalto (3436), the highest mountain of the Rieserferner Group. 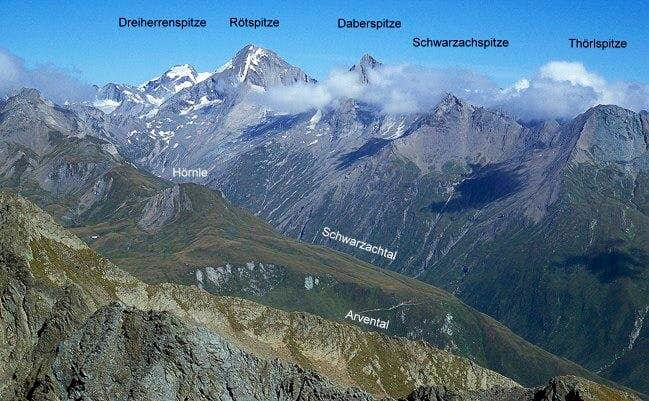 I'm glad that Mathias Zehring also climbed the mountain and came up with his great summit shots. He even labelled them! Hard to pick one for large display 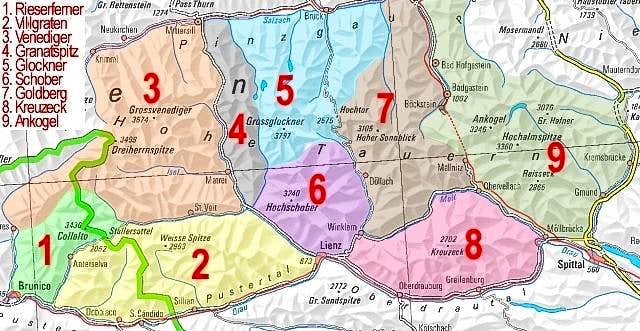 Dreieckspitze can be reached from the south, from Pustertal / Val Pusteria. Here are the itineraries for Rein / Riva di Tures, where all three ascent routes start.

Northern Approach
Take B161, Felbertauern Road, from Kitzbühel south. After passing Felbertauern Tunnel take the road to Lienz, where you can turn west ino Pustertal Valley. Go to Bruneck / Brunico and turn north. Follow the road to Sand in Taufers / Campo Tures where you turn east and head for Rein / Riva di Tures.

Southern Approach
Take motorway A27 from Venezia north to Belluno. At the end of the motorway take SS51 north to Cortina d'Ampezzo an on to Toblach/Dobbiaco. Here you are already in Pustertal Valley. Go west and turn north at Bruneck / Brunico. 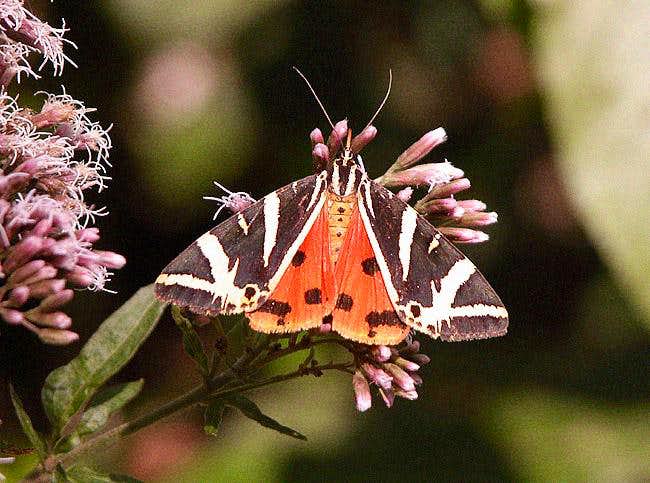 Dreieckspitze "belongs" to two national and natural parks. Be sure to behave as is expected there. Since the mountain is located on the border between Austria and Italy it is a good idea to bring your ID.

Dreieckspitze is an all year destination. The routes through Knuttental and Bachertal also can be done as ski tours. The northern route (Knuttental) however deviates significantly during the ascent. It heads for a saddle to the north of Dreieckspitze and climbs the mountain from its eastern side. Presumably the mountain is easier to climb in snowy conditions as scree and headstone rocks will be covered by the white stuff.

Avalanche reports:
In winter the avalanche danger rating often is lower than in the northern or central parts of Tyrol. On the other hand it is possible that until January there is not enough snow for tour skiing.

Maps
I always use the maps by Kompass Verlag. They are scaled 1:50000 and show all the necessary informations.

Books
An excellent hiking book is (in German)
A clear and detailed hiking-guide in Italian is: