Blue Mountain is located in the northern foothills of Colorado, west of Loveland. The foothills and hogbacks are a kind of transition zone from the plains to the mountains. The topography here isn’t flat but it lacks the altitude and craggy peaks commonly found further west. To better envision this, Front Range cities like

Denver, Boulder, Longmont, Fort Collins etc. lie along this boundary area in what’s called the Urban Corridor. Heading west from these cities which, lie at the western edge of the plains, the topography starts to gradually rise and fall across mellow and worn ridges. The mean elevation also begins to rise, vegetation slowly changes and wildlife ebbs and flows in diversity.

The ridges and valleys found in the foothills and hogbacks are some of the oldest features in the mountains. They were uplifted millions of years ago and thus, allowed to become weathered and worn. Hogbacks tend to be steeper, more symmetrical and narrow as the Earth surrounding the harder rock weathered away first, like Duncan’s Ridge at Horsetooth Reservoir; a popular climbing spot. The rock on the leeward side can be as steep at 90°. Foothills tend to be wider (allowing the growth of trees), much longer and mellower. ‘Foothills’ also is a bit of a catch-all term for hogbacks and everything else found in this region. Blue Mountain, while not a hogback, is a higher peak in the foothills.

The foothills are popular with people. They are close enough to urban area’s to allow people to commute back & forth to work or to escape the city and recreate with minimal travel time. They are also removed enough to provide a large modicum of privacy and isolation. Hiking trails, mountain biking, camping, reservoirs, ranches & private property dominate this gentle Rubicon.

Blue Mountain at 7,888’ lies along one of these mellow foothill ridges. It separates two valleys: Rattlesnake Park and Chimney Hollow. It is located in Larimer County and lies inside the Pinewood Lake quadrangle.

From the east, Blue Mountain doesn’t really present as a peak. It gets lost in the progressive hogbacks and lower ridges. From the west, since Rattlesnake Park is 100% treeless, the mountain figures very prominently as a forested peak. In fact the lower treeline is so prominent, it makes one wonder if this was done intentionally many moons ago. It is only a class-2 peak but it does carry an impressive 1,108’ of prominence and Pole Hill is both its parent and proximate parent.

Speaking of Pinewood Reservoir, at an elevation 6,580’, there are three hundred and twenty-seven acres of public lands that encircle this 100+ acre reservoir. Kayaking, camping and fishing make it the ideal place for a little fun in the mountains without driving too far.

Water flows from Pinewood Reservoir through Bald Mountain Tunnel then down the Flatiron Penstocks into the Flatiron Power Plant (in Chimney Hollow) which, discharges into Flatiron Reservoir. This is where daily use permits can be obtained.

As part of the Colorado-Big Thompson Project to divert water from the West Slope to the East Slope for drinking water, irrigation and hydropower generation, the reservoir is jointly operated by the Bureau of Reclamation and the Northern Colorado Water Conservancy District, which manage water levels for irrigation, municipal and industry use.

The biggest problem with Blue Mountain is access. So in lieu of specific directions to a trailhead or parking area, I’ll provide directions to the only legal place to park, Pinewood Reservoir.

Approaching from Fort Collins: Take Taft Hill Road or College Avenue (US 287) south for ~10 miles to Loveland. Turn right (west) at highway 34. In Loveland, this will be Eisenhower Blvd. Leave Loveland heading west on hwy. 34 towards Estes Park. Just past mm 85, turn south onto county road 29 and continue for approximately 2 miles. Then just pass a creek/wooded hollow, turn right (west) onto county road 18E (also known as Pole Hill Road) and continue for another 6.5 miles to Pinewood Reservoir. There are three parking areas you can choose from. Be aware, all of Pinewood Reservoir is a day-use paid entrance area. But this will be detailed in the next section.

Approaching from Loveland: Head west on Hwy. 34 (Eisenhower Blvd.) and leave Loveland. Follow the instructions as outlined above.

When at Pinewood Reservoir, there are three areas to park at. These are: Blue Mountain Trailhead (the closest), Pinewood Campground and the Ramsay-Shockey Trailhead. For Blue Mountain access, use the namesake trailhead. At 4 miles after passing Flatiron Reservoir, at the top of the grade before the road begins to descend, there is a parking area on the left side (south) of the road. I have been told this is private property. However, of the countless times I’ve used it, I have never run into a problem. It’s more convenient and provides for closer access to the mountain. However, use this at your discretion.

Some interesting historical information I found on Pole Hill Road dating from 1875. 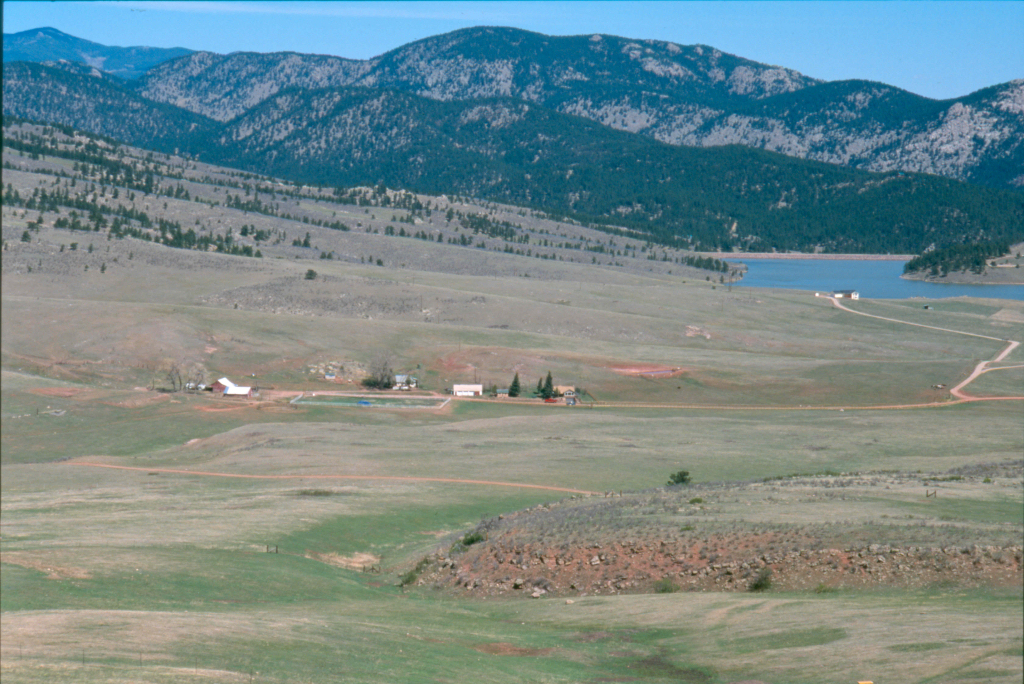 So unfortunately, Blue Mountain has a truck-load of red tape, and I do mean a lot. So much so, that I’ve contemplated not putting it up on Summitpost. But, here it is, and plus, I like the challenge of access issues.

This mountain is located entirely on private property. From the east, Chimney Hollow is either state government property due to the Colorado-Big Thompson Water Project or privately held via the Stevens Ranch. In fact, as one is driving west up the road towards Pinewood, the left side (south) of the road is almost all fence until the grade steepens. Once the fencing ceases, there’s just guardrail. So no real place to park & the two spots that do offer room are signed ‘private property.’

From the west, the whole of Rattlesnake Park is privately owned by either the Pinewood Ranch or the Linger Ranch. And upon hiking the ridge towards Blue Mountain, one will encounter old, primitive roads and old barbed-wire fencing twisted from years of disuse. So keep in mind, any roads you see on topo maps or Google Earth are ALL going to be private. So to legally hike this mountain, you’ll need to obtain permission first. Even the large pull-out I mentioned earlier in the ‘Getting There’ section is private and part of the Pinewood Ranch. I only learned of this recently (2.15.19) from a contractor doing work there.

Parking at any of the three areas surrounding Pinewood Reservoir requires a day pass. These can be obtained at the ranger station/kiosk back at Flatiron Reservoir a short ways down county road 31 towards Carter Lake. You’ll see the park office and government vehicles almost immediately. Use the north entrance station then go back and park at Pinewood without worry.

To make a sticky situation (legal access) even stickier, the private ranches in the area aren't the only problem. There is also the Blue Mountain Conservation Area of which, the smaller Chimney Hollow Open Space just to the east is part of. Coming in at roughly 1,800 acres, this open space lies in the valley just east of Blue Mountain and west of Carter Lake. It was included in a larger effort in 1997 by Larimer County to increase the size of the open lands available. BMCA is kind of an umbrella that jurisdicts everything. The area's that fall uner the BMCA include: Harper Conservation Easement, the Ramsay-Shockey Open Space (surrounding Pinewood Reservior) and the signifigantly larger Blue Mountain Bison Ranch Conservation Easement. These lands are intentionally left wild and undeveloped for the grazing and rearing of Bison. Even though it is technically labeled open space, they are closed off to public access. The Northern Colorado Water Conservancy District is a partner to Larimer County in these conservation efforts and has purchased 1,600 acres in Chimney Hollow for future plans to construct another reservoir. There are tentative plans to increase public access (IE: trailheads, hiking, mountain biking, boating) but this is still about 3-5 years down the road.

Unlike with the Red Tape section, Pinewood does have some great but limited camping options. Limited in that, one is only allowed to camp at the Pinewood Campground. It’s great because this area is slightly elevated and is the only spot that actually has trees. So there is plenty of shade in the summer months and shelter in the colder, winter months. If Blue Mountain is something you want to hike, I would just camp here for the night and possibly make a weekend of it. Plus if you fish, Pinewood had stocked Trout and Tiger Muskie. And there’s hiking trails that go around the reservoir into the Ramsay-Shockey Open Space

Pinewood Reservoir is at an elevation of 6,580’ and is about 80’ deep. Although recently, the reservoir as of September 2018 is being drained for some routine dam and tunnel maintenance. Expect things to be back to normal come summer of 2019.

The campground has: restrooms, picnic tables, tent sites & trailer sites, utilities (summer months) and potable water. For a non-electric site (April-September), the nightly fee is $15. An electric site is $25. Daily use fee’s run $7.00/day. For further information, go to: www.larimer.org/naturalresources or call #970.619.4570.