Click to see Bald Mountain from the slopes of Mt. Silverheels. 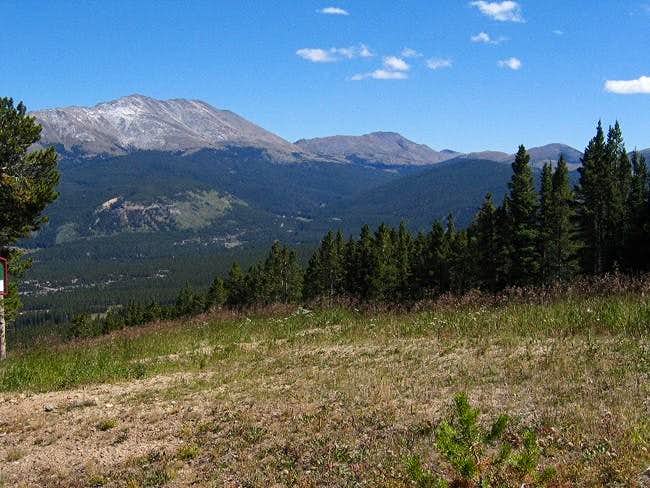 Bald Mountain on the left, from Breckenridge ski slopes


If you have been to the mountains near Denver, you are likely to have seen it, from I-70 near Dillon Reservoir, or maybe while skiing in Breckenridge.

Bald Mountain is the highest point of a 6 mile long ridgeline to the southeast of Breckenridge. This ridgeline runs northwest to southeast and rises above 12000 ft. Half way along the length of it, a 12159 ft saddle divides the ridgeline into two sections: the southeast section is known as Boreas Mountain (13082 ft) and the northwest section is Bald Mountain. Near its northwestern end, the crest of the ridgeline exceeds 13400 ft over an area 0.8 miles long. The USGS map identifies three high points along the length of this area. Southeast to northwest, these include: Point 13679 ft, Point 13634 ft and Point 13684 ft (the official summit of Bald Mountain). When viewed from I-70, however, Bald Mountain appears as a single pointy peak (and not a long ridgeline). To the east, the 12046 ft French Pass separates Bald Mountain from Mt. Guyot (13370 ft) and to the west, the 11481 ft Boreas Pass separates Bald and Boreas Mountains from Hoosier Ridge.

Boreas Pass is of historical significance. In 1882 The Denver, South Park and Pacific Railroad Company completed tracks over Boreas Pass connecting Breckenridge to the town of Como (on Route 285). Despite high altitude and harsh weather, a community sprang up on Boreas Pass near the tracks. Between 1896 and 1906, this community boasted to have the highest post office in the United States. The railroad operated until 1937 when it was shut down. In the 1950's, tracks were removed and the railroad bed was converted into a dirt road. Today, only a couple of cabins remain at Boreas Pass. These cabins have been converted into a museum of sorts. A few bunk beds and a wood burning heater, provide refuge for those interested in back country winter skiing. Old tree stumps from local timber used to build the cabins litter the slopes near Boreas Pass.

The easiest way to reach the top of Bald Mountain is from Boreas Pass. You will follow a trail to the 12159 ft saddle where an enjoyable hike over the gently sloped ridgeline will lead you to the summit. Portions of the ridgeline are very reminiscent of the east slopes of Quandary Peak. I climbed this mountain on a foggy day and got stuck in sleet and severe wind. On a clear day, you will get good views of I-70 and Dillon Reservoir as well as the town and ski resort of Breckenridge. You are likely to be the only one on the mountain. 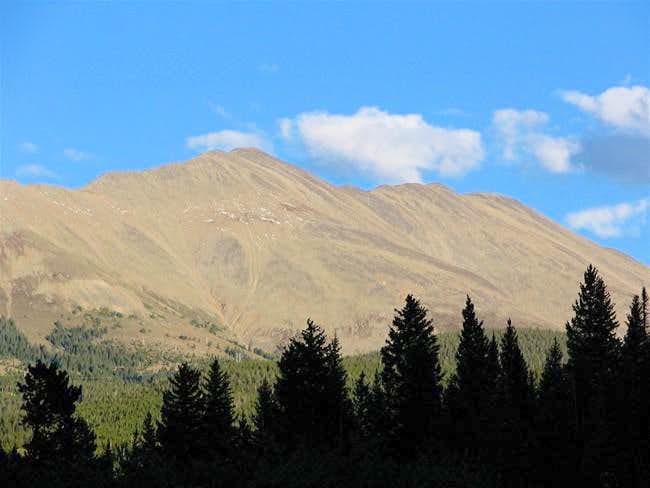 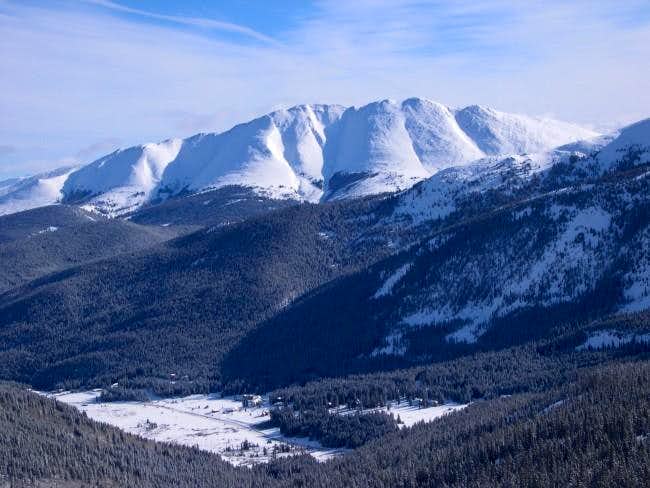 Drive to the south end of Breckenridge on Route 9. At a traffic light, you will see Boreas Pass Road as a city street on the east side of Route 9. Turn onto this road and follow it up a hill directly above Breckenridge getting good views of the town and the ski resort. At 3.3 miles, pavement ends but the road is well-graded and is passable by any car. At 9.5 miles from the traffic light, you will reach Boreas Pass.

You can also access the pass from the town of Como on Route 285 (11 miles, I don't know the details).

Call Pike National Forest as above. 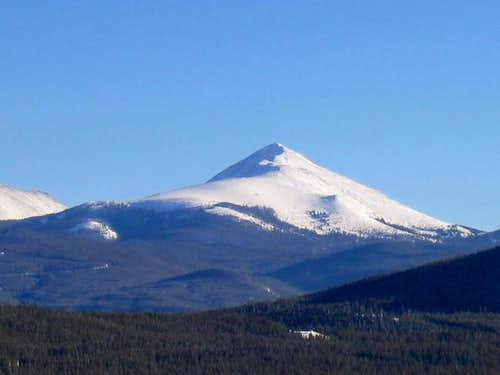 Click to get the forecast for the top of the nearby ski resort of Breckenridge.