Go to Topoquest and enter McClellan Mountain, and you will get not the summit but the notch where a 4WD road climbing the mountain (it does not reach the summit) ends. Whatever the reason for that actually is, the symbolism is clear; the mountain is better-known to off-road drivers than it is to hikers and climbers. The lack of anything but the faintest trace of a use trail on the mountain's connecting ridge with centennial thirteener Mount Edwards further bolsters this observation. Now, since few hikers and climbers visit McClellan and the average ATV driver only gets off his vehicle to take a leak or have a smoke, and since the mountain's rugged western face beckons with scrambling opportunities when the rest of the mountain is mostly broad and gentle, what does that say?

It says you ought to climb or hike McClellan if you are more into mountains' scenery and splendor than you are into their names.

McClellan is about a mile northeast of Mount Edwards. It is an unranked peak because although it has sufficient prominence on its northern, eastern, and western sides, it rises slightly less than 200' from its connecting saddle with Edwards. But the quiet, scenic views from the summit area and the ruggedness of the western face make McClellan much more than some bump on a ridge. 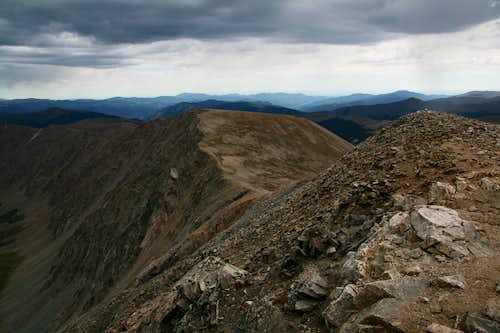 At the eastern base of McClellan is the old site of Waldorf. Today a ghost town, in the late 1800s and early 1900s the Waldorf area was an important one. Prospectors found silver there in 1867 (hence the names Argentine Pass and Argentine Peak-- think back to AG, Argentum, in chemistry class), and by 1871 a road over Argentine Pass (on the Continental Divide) connecting Georgetown (now a town along I-70) with the gold and silver mines in Horseshoe Basin (on the Divide's west side). Commodore Stephen Decatur oversaw the building of this road, and his name lives on with nearby Decatur Mountain, about two miles south of Argentine Pass on the Continental Divide.

Anyone who has ever hiked up the trail to Argentine Pass from Horseshoe Basin will easily understand why the road didn't last-- the mountainside is just too steep and loose. In fact, the trail is the remains of the road. On the east side of the pass, though, the road is still driveable for people with 4WD vehicles (see Getting There for more details).

Edward Wilcox (namesake of nearby Mount Wilcox, a very colorful peak very prominent in the Waldorf area), who owned a mining company and was a minister as well, built the town of Waldorf around 1900. From 1905-1906, he established the Argentine Central Railroad for transporting silver ore. 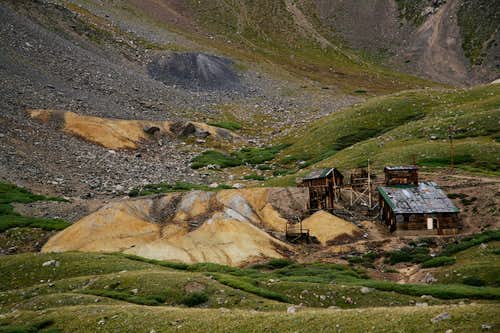 Wilcox saw a way to make the area pay from tourist dollars as well. He extended the railroad so that it took people up McClellan Mountain to a notch north of the summit (the spot the Topozone search locates), where a sharp dropoff above Stevens Gulch (now home to the very popular trail for Grays Peak) surely inspiring and thrilling many. Also attracting attention along that trip was an icy mine billed as an ice cave. A challenging 4WD road still climbs to that notch; it is very steep and has some very tight switchbacks. Roads and trails also lead to some of the few surviving buildings from the era. For the most part, the Waldorf ruins are just tailings pile with planks of wood and rusting nails and pieces of metal strewn about (a reason to use extra caution when driving around here). 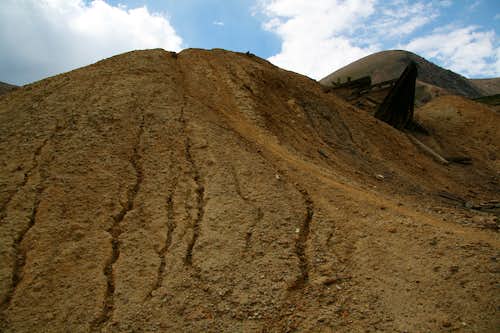 Routes Overview (Including Getting There) 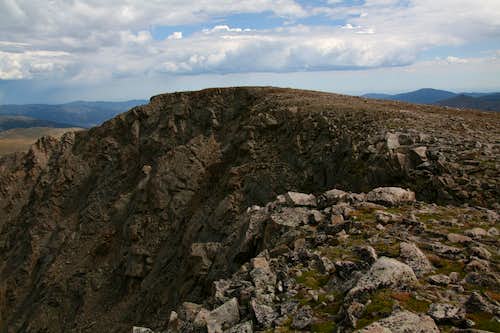 The summit
This section covers three possibilities for reaching the summit. The section in bold covers the route that I did and know, and I have attached a more-precise route page for it. 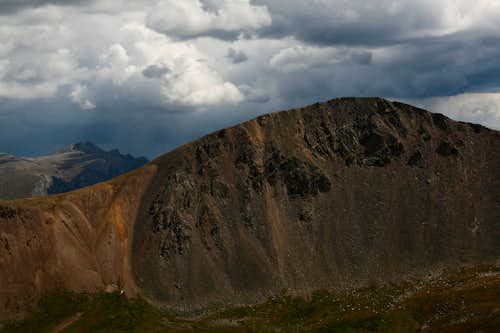 A view from Argentine Pass
Fuller hiking and driving details are provided on the attached route page!

Drive south from Georgetown on Guanella Pass Road for 2.5 miles and turn right onto Leavenworth Creek Road (248). In 6 miles, this rocky road (4WD not necessary, high clearance strongly recommended) reaches the ruins of Waldorf. The road climbs to the right of a tailings pile. At an intersection with a road climbing very steeply to the right, bear left. Follow the road for 2.3 miles to Argentine Pass. 4WD is necessary from Waldorf to the pass.

The hiking route from the pass is about 4 miles RT, with an overall elevation gain 600' (to the summit, less on the return hike). It is Class 2, but McClellan's west face has many good scrambling opportunities.

Follow directions above to Waldorf, but above the tailings pile, take the right fork. This is the old route up McClellan Mountain leading to the notch that train-riding tourists visited. The road is steep and narrow and has tight switchbacks, and it has a moderate rating but is still known as a white-knuckler. The road reaches the 13,000' notch after 4.7 miles. From there, it's a Class 2 hike for less than a mile to the summit.

This could probably be subtitled the "No One in His Right Mind Approach."

Take Exit 221 (Bakerville) on I-70. A dirt road heads south about 3.5 miles to the Stevens Gulch Trailhead. The road is rough in places with many bad potholes, and though I've seen regular passenger vehicles make it all the way up, I wouldn't want to try it myself. However, the road, though slow going, is not difficult with high clearance and does not require 4WD. Many people use a small parking area near the interstate exit or park along the road; if you show up after 8 or 9, especially on a weekend, don't count on finding a parking space at the trailhead, anyway.

Follow the Grays Peak Trail 1-2 miles and then head east off the trail toward McClellan's west face and start charting a way up. This is truly going to be an adventure route-- the rock on this face is steep and loose, and the going will be at least Class 3. Wear a helmet; even though human climbers are highly unlikely to be above you, mountain goats probably will be.

A longer but easier and safer alternate would be to use the West Ridge route to Mount Edwards (Class 2+) and then use the SW ridge route to McClellan's summit.

The scrambling route commits you to around 6 miles RT with about 2300' of elevation gain. 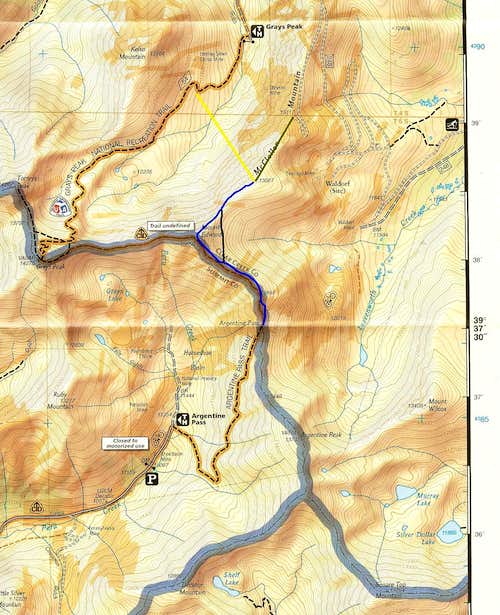 Video of summit view by Niederbayer 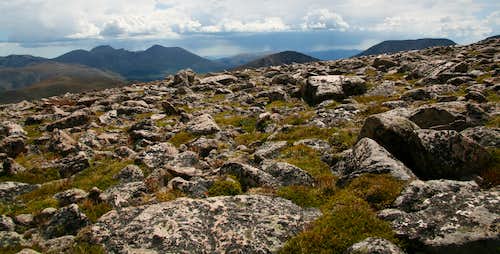 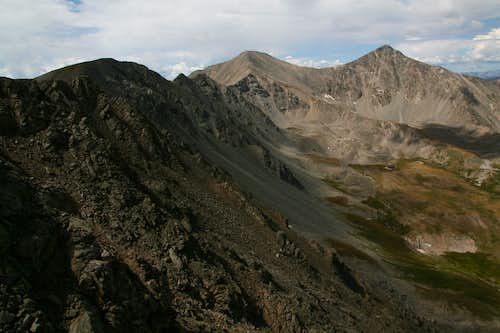 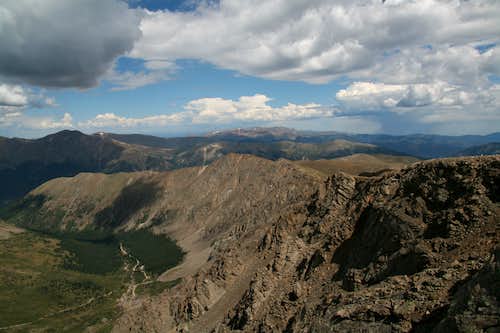 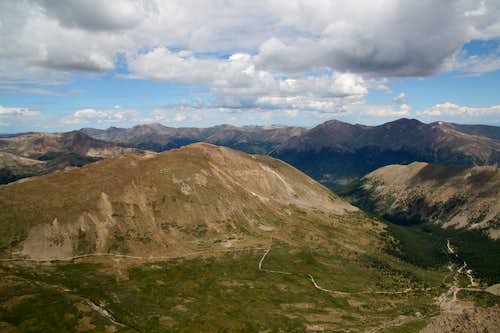 No red tape except the usual concerns about respecting any marked private property and staying out of mine shafts and old buildings.

There are some primitive camping areas along the road to Waldorf, and there are more opportunities around Waldorf, though it's ecologically insensitive to camp on tundra and downright uncomfortable camping on rocks. Plus, the area from Waldorf to Argentine Pass ranges from 11,600' to 13,200', where it’s not very comfortable for most people to sleep.

There are two developed campgrounds before Guanella Pass and south of the turnoff for Waldorf, and there are more, plus dispersed sites, south of the pass. The Guanella Pass Campground does accept reservations. Visit recreation.gov for more details.

Dispersed camping is widely available in Horseshoe Basin. Stevens Gulch is mostly a day-use area, but you could sleep in your car at the trailhead.