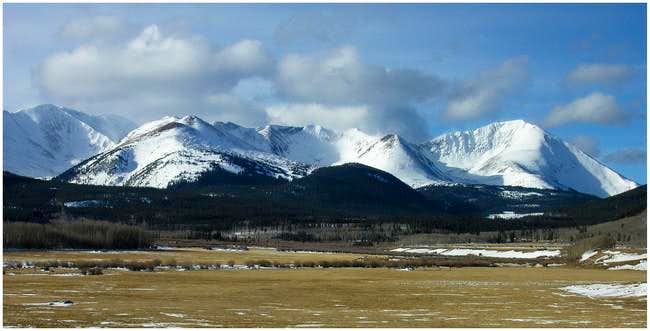 I get the feeling that after I post this mountain on SP, some will say, “I know that mountain!” Every day hundreds of people view this mountain from Co. Hwy 285, but only the dedicated mountain addict knows its name and even less will ever touch its summit. While descending the scenic Kenosha Pass just east of the South Park region, Mount Guyot flaunts a beautiful pyramid-like symmetry that conveys “prominence.” This 13,370-ft mountain surrounds itself with good camping, good mining roads and extensive mining history. 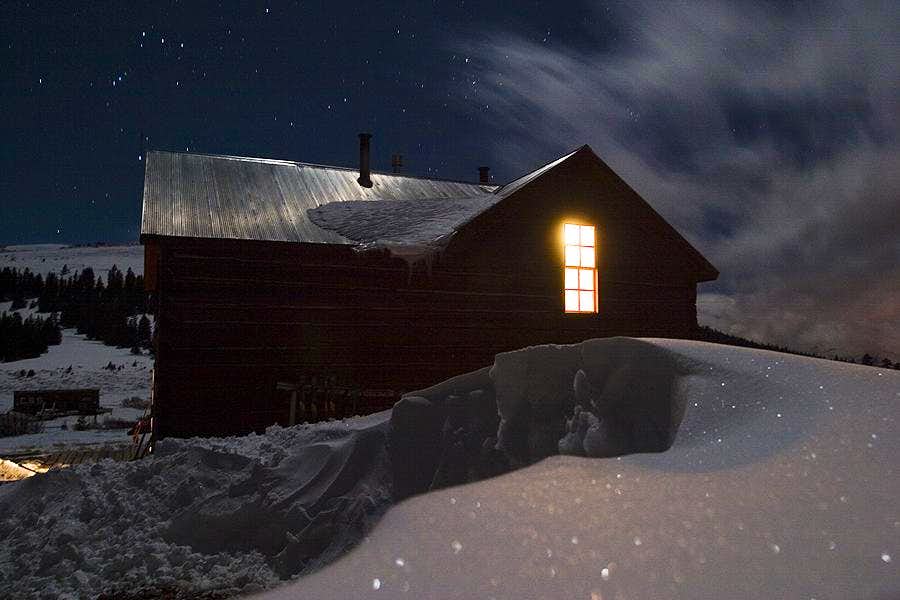 With the discovery of gold in 1859, miners by the thousands swarmed over the Continental Divide into the Swan River area near Breckenridge. Prior to this discovery, the Georgia Pass road had a reputation for harboring the intimidating Arapaho Indians whom often traveled the pass. Despite the threat from the Arapahos, miners braved the route over Georgia Pass for a decade and soon the trail turned into a wagon road. In the early 1870’s the smoother grades at Hoosier Pass and Boreas Pass led to the gradual abandonment of Georgia Pass.

The standard summer route is the east ridge via Georgia Pass (11,585-ft). After ascending this ridge in January, Jim and I concluded that an approach from the Breckenridge (French Creek)side to Guyot’s north ridge and northwest ridge are safer alternatives for a winter outing. The east ridge is a safe winter route up to the last 200-ft where the ridge bends slightly to the north, a detail that is very difficult to distinguish from a topo map.

What seemed to be an easy ascent directly up the ridge, quickly became an challenging exercise in route finding that eventually allowed us to reach the true summit. Without snow this route is only class 2+, with snow and ice the routes challenges generally increase in difficulty.

The following is an excerpt of Colonalpyats (Jim) excellent analysis of Mount Guyot’s East Ridge Route in January.


“The lower ridge, running in a ENE direction, was just
as expected. Prevailing winds from NW did a good job
of clearing snow. It didn't occur to me until later
that the upper section runs WNW. Much harder to judge
the effect of the wind on that kind of ridge. Looking
at your shot of that section is interesting. Up near
the summit, the snow is smooth on the right side of
the ridge and one can imagine a cornice hanging off to
the left. Further down, in the notch, one can see a
"baby cornice" that is haninging to the right. Wind
obviously hits the ridge from both sides which leads
to the unique problem of having a cornice hanging to
the left and a wind loaded slope to the right. I knew
there would be a cornice up there and figured we'd
just skirt it on the windward side. It didn't occur to
me there wouldn't be a real windward side. In
hindsight, a more careful study of the map should have
revealed the possibilty.”

From Denver Colorado, travel Hwy 285 past Aspen Park, Conifer, Pine Junction and Bailey. Continue to Kenosha Pass where you will find the Kenosha Pass Campground. It is only one hour from Denver to Kenosha Pass. Descend Kenosha Pass and continue to the tiny town of Jefferson and turn right on 35 Rd, the road is paved. After 2.9 miles 35 Rd will fork with 54 Rd. Go straight here and the road is now 54 Rd. At mile 5.4 look for a signed turn-off for “Georgia Pass” go left. The Michigan Creek Campgound is located here as well.

From here it is up to you where you park to begin your approach, there are many places along the road to park. In winter, depending on conditions, you may be able to drive a few miles up this road. Also, this is a popular road with day recreation snowmobiles. If your lucky, you may find a consolidated and snow packed road all the way to Georgia Pass at 11,585-ft. due to snowmobile traffic.

Click here to view a 7-day forecast for Fairplay, Colorado

Here is a medieval connection. Wolfram von Eschenbach says that his version of Percival (Holy Grail story) is due to a certain Guyot (of Provence)