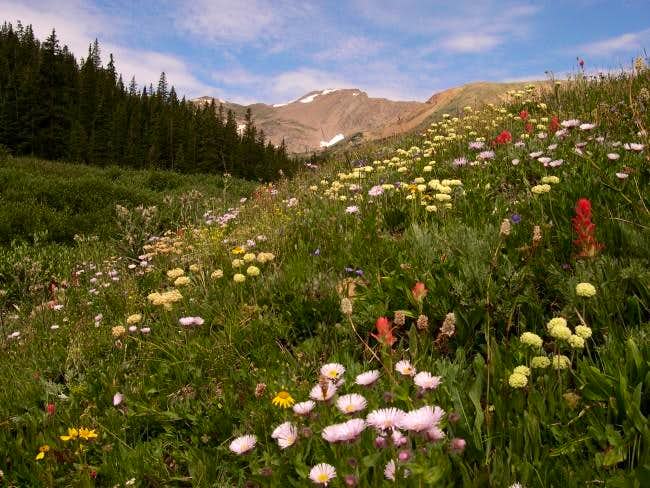 Pettingell Peak (13,553-ft) resides only 1 mile northeast of The Citadel (13,294-ft) and 1.5 miles northeast of Hager Mountain (13,195-ft.) This beautiful stretch of 13,000-ft mountains is situated directly on the Continental Divide just north of Eisenhower Tunnel and Loveland Ski area. Resting at the head of Herman Gulch, Pettingell Peak stands guard over its surroundings with gentle, grassy slopes and a rugged east ridge. Only 45 minutes from Denver Colorado, Pettingel Peak is a perfect hike/climb for those in a time crunch.

Many eyes have viewed Pentingell Peak, its tough to miss when hiking the “urbanite” Herman Gulch Trail. This trail has to be one of the most popular trails in the Front Range with its remarkably easy access from the I-70 corridor. Don’t plan on much solitude when hiking to Herman Lake, the tiny alpine lake sees anywhere from 500 to 700 people weekly. In contrast, Pettingell Peak’s summit log receives only 5-8 signatures per week during July-September. So, once you’re off the beaten path, it’s safe to assume that the high, rounded, grassy slopes, and the jagged, notched-out ridges of the Continental Divide will be yours for the taking.

Pettingell Peak has a reputation for being easy to summit, for the standard south slopes route is class 1, with 8 miles-RT & 3,200-ft from Herman Gulch TH. Recently, I have had trouble hiking class 1 and easy class 2 routes- for those routes don’t satisfy the hunger I have for a little or a lot of class 3 climbing. For those who want class 3 climbing on Pentingell Peak, the route of choice is the East Ridge Route. This is a fun route, albeit a bit loose in places. The ridge narrows to a few feet wide in spots and there definitely is some exposure to deal with. The half-mile traverse consists of mostly easy class 3 climbing but there are at least two ugly notches and one headwall that one must negotiate. Solid route finding is a must to keep the difficulty at class 3. This is one of those ridges that the difficulty is totally up to you, tough class 3 and class 4 are always lurking around the corner.

The trailhead areas are accessed from Interstate 70. Drive west from Denver on Interstate 70. The Herman Gulch approach, just less than 3 miles away, is the next exit west of the Bakerville, exit 218. From the west, the Herman Gulch TH is 2 miles east of Eisenhower Tunnel. After exiting, make a sharp right and follow the improved dirt road to the huge parking area. This parking area tends to fill up fast on the weekends.

February 15, 2004
An avalanche swept several skiers 700 vertical feet before burying two of them this morning. One woman was able to dig herself out of the snow, but another man remained buried. Alpine Search and Rescue members found the man by the signal from his beacon. When they found him he was not breathing and didn't have a pulse, but the rescuers were able to revive him. He was airlifted to Saint Anthony Central Hospital in Denver. A total of six people were skiing in the Herman Gulch area, about two miles east of Loveland. The Colorado Avalanche Information Center says the avalanche danger in the central mountains is moderate overall, but the risk is higher above tree line.

UPDATE: Five skiers from the Boulder area were involved. Skier 1 and Skier 2 were swept away by the snow, while their friends watched helplessly. Although buried, Skier 1 was able to free herself. She then made her way down the slope and located Skier 2's backpack sticking out through the snow. Skier 1 immediately started digging and was eventually helped by the other 3 skiers. Skier 2 was pulled from the snow after more than 5-7 minutes (4-6 minutes is when brain death begins). One of the skiers went to the car and called 911.The others performed CPR and were able to successfully resuscitate Skier 2. LifeFlight immediately picked up two Ski Patrollers from Loveland and dropped them in the area. Then subsequently picked up and dropped off two paramedics from Clear Creek County, and finally two rescuers from Alpine SAR. Once safely down the mountain, the helicopter transported Skier 2 to a local hospital. As of 7:30 pm, the Sheriff was reporting that Skier 2 was being moved to a hospital room, and was recovering. A spokesman from Clear Creek County Sheriff, says rescuers are crediting Skier 1 with saving Skier 2's life, and calling her a hero.

UPDATE: All five skiers were wearing avalanche beacons, but never needed to use them thanks to the quick work by Skier 1 in locating skier 2's pack in the snow.

This is an unprotected, general use area of the Arapaho National Forest. No fees or permits are required. Dogs must be kept on a leash. Unleashed dogs on the Herman Gulch trail are a continuing problem, and fines have been levied. Please sign the register. This aids in the management of this heavily used area. (per Aaron Johnson)

Early starts are recommended during the summer for beating the weather.

Optimal dry conditions will be enjoyed July through September, when standard hiking gear will suffice.

Healthy amounts of snow will be encountered in June. Do not attempt in snow without an ice axe. Snow shoes or skis would be recommended for the approaches.

Dry Gulch sees little activity in the winter. Avalanche danger is considerable during normal and heavy winters, particularly from Mount Bethel. Drift fences placed high on Bethel's steep slopes are a testament to the danger that exists here. Experience and appropriate gear is recommended for early or late winter visits. (per Aaron Johnson)

Camping is allowed in the area. Please observe wilderness protocols when camping. Good camping can be found in the higher portions of Watrous, Herman and Dry gulches. Alpine camping at Herman Lake is popular. You can easily car camp in the parking lot at the TH. (per Aaron Johnson)