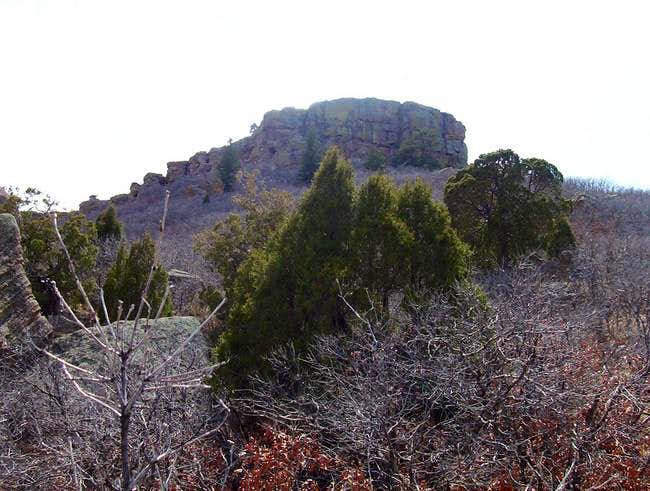 Though this peak is small it is the first in my effort to post information on some lesser known peaks of the Front Range that offer options for those who want to continue climbing in winter, but don't want to head up to higher, snowier elevations.

Towering more than 400 ft. over the Crowfoot valley, Castle Rock's namesake peak greets travellers as they hurry down I-25. Despite it relatively small size, the aptly named peak is still an impressive peak, especially with its eighty foot vertical rock walls capping the summit.

White settlers were first drawn to this part of the state by the same thing that fueled much of the western expansion: gold. The settlement of what was then Castle Rock started out as just a few prospectors shacks located at the foot of "The Rock". In 1874 the town of Castle Rock officially earned that name, and the town was officialy chartered in 1881. Castle Rock is now the seat of Douglas County, one of the fastest growing counties in the country.

As the city of Castle Rock has expanded it has completely surrounded this small mountain. The summit block and 60 acres of the land surrounding it are now protected as part of Rock Park, a division of Castle Rock parks and recreation. This makes this mountain kind of what I would call a family mountain. On any given day there are several families with small children exploring this natural oasis right in their backyard. Unfortunately because this is in the middle of a city, there are also some pretty suspicious looking people lurking around, and people often don't hesitate to leave their garbage on the ground.

Of the millions of people who gaze at this mountain as they drive under it on the highway, very few of them probably ever stop to climb to the top. Indeed, from this vantage point the mountain does look imposing: vertical rock walls rising nearly eighty above a thirty foot overhang. Even among the people who stop to hike in the park very few ever make it to the actual rocky summit, most are content to walk around it and stare up at the imposing walls.

The few who are willing to scramble up to the gently sloping summit plateau are usually rewarded with solitude and almost always with exceptional views of the Front Range. Indeed more than a hundred miles of mountains are visible spanning from the massive mountain that is Pikes Peak to the distant Longs Peak. Indeed, while the easiest route to the summit is an easy scramble, there a number of short routes that could be top roped, or free-climbed as a nice easy way to practice rock climbing.

The parking lot for the park is located along Front St. This street serves as the frontage road on the eastern side of the highway and can be accessed from any of the Castle Rock exits. The easiest way to get there is to take the Founders Parkway exit (the northernmost Castle Rock exit) and go east on on Founders parkway. Turn right on Front St. after about a third of a mile, and follow Front St. south to the parking area on the left side of the road. Another option for those coming from the south is to take the Wilcox St. exit, and go north on Wilcox to Fifth St. Turn right onto Fifth St. and take the second left onto Perry St (Front St. changes names here). The parking area will be shortly on your right. From the parking you can get on the trail that switchbacks up the side of the mountain to access the south side of the mountain.

There are no permits necessary for day use of the park.

Any time of year is fine. It can be very hot in the summer, and there is a risk of encountering rattlesnakes. Winter is probably the best since there willd be less people, and it won't be as hot.

I think camping out under the stars on the vast summit plateau and watching the sunrise over the Front Range would be an amazing experience. However, unfortunately, the park is closed at night so that there is no legal camping near the mountain. Furthermore because this mountain is in the middle of the city, camping out might reduce to the status of a bum.

The park is located completely within the city of Castle Rock, and you can therefore check conditions for that municipality. There is very little difference between the summit and the valley with the exception of high winds, which can greatly increase in intensity as you gain elevation.

Thanks for the info, I will make the change.

Rock Park is closed from dark to dawn, so there is no legal camping within the Park or on the Rock.

Thanks for the info, I will make the change.