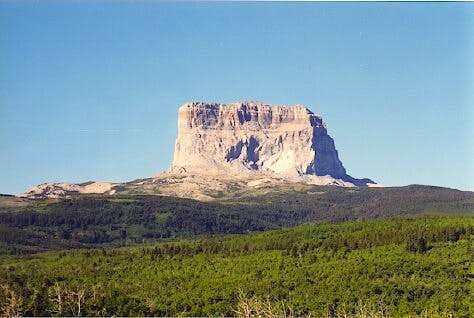 Chief Mountain from the East. Photo by montanaboy

"White Man's Dog raised his eyes to the west and followed the Backbone of the World from north to south until he could pick out Chief Mountain. It stood apart from the other mountains, not as tall as some but strong, its square face a landmark to all who passed. But it was more than a landmark to the Pikunis, Kainahs and Siksikas, the three tribes of the Blackfeet, for it was on top of Chief Mountain that the blackhorn skull pillows of the great warriors still lay. On those skulls Eagle Head and Iron Breast had deamed their visions in the long-ago, and the animal helpers had made them strong in spirit and fortunate in war." (From Fools Crow by James Welch)

Chief Mountain is one of the most interesting peaks in Glacier National Park from three different perspectives; geological, historical and, of course, mountaineering. I will cover the geological and historical perspectives very briefly, including links and references for those who wish to do more reading on these subjects. Besides being a unique and spectacular peak when viewed from the east, Chief Mountain is also an excellent example of a klippe or isolated erosional remnant of an overthrust. In this case of the much studied and documented Lewis Overthrust. The mountain consists mainly of Precambrian limestones thrust over the top of Cretaceous shales resulting in the anomaly of having some of the oldest rocks on earth sitting on top of some of the youngest. Brief description with cross section and Photos showing contacts

The history of the mountain is as interesting as its geology. It is one of the earliest mountains in the area ever to be placed on a map, appearing as "King Mountain" on maps published in England in 1795 / 96. Meriwether Lewis observed the mountain on the Lewis and Clark Expedition and called it "Tower Mountain". In 1854, a state survey referred to the mountain as "The Chief or King Mountain". Some early German geographers dubbed it as "Kaiser Peak". The present day name of the mountain is appropriately taken from the original Blackfeet Indian names of "Old Chief" or "The Mountain -of-the-Chief" Early Indian legends about the mountain involve braves ascending the peak and staying on the top in their "medicine vision" ritual. The most popular of these involves a Flathead Brave who risked not only the long journey from the west, but also discovery by Blackfeet who were not on friendly terms with the Flatheads. He is said to have carried with him to the top a bison skull that he used as a pillow during his stay. The first white men to climb the mountain in 1892 discovered a weathered bison skull on the summit. Henry L. Stimson who later became the Secretary of State under President Hoover and the Secretary of War under Franklin Roosevelt along with Dr. Walter B. James and William Kipp (a Blackfeet Indian) made the first ascent of the mountain by non-Indians on 8 September 1892. They did not want to merely scramble up the easy west side of the peak, so they pioneered a route up the spectacular east face. Amazingly, this fabulous route was not climbed again until 1951 when it was first repeated by Gordon and Alice Edwards.

Chief Mountain is located on the border between Glacier National Park and the Blackfeet Indian Reservation near the northeast corner of the Park. Glacier National Park Map The easiest access to the mountain crosses Blackfeet land and is subject to tribal regulations. At the present time, a Blackfeet Fish and Wildlife Conservation Permit is required and camping is restricted to established camping areas only. At one time, access across tribal lands was prohibited. It is wise to check with the tribal authorities for both the required permit and current regulations before planning to access the mountain across tribal lands.

The best access to the south and southeast side of the mountain is via the old road up Otatso Creek. This road gradually deteriorates toward the Park and a 4-wheel drive is recommended to get very far. The road leaves the west side of Chief Mountain Highway about 4.5 miles northwest from the junction with Highway 89. Drive as far as possible or to a good starting point, then proceed cross country on foot to the mountain. Note, the on line Park Map shows this road as a trail indicating 6.4 miles from the highway to the Park Boundary. Access to the north and northeast side of the mountain is easiest via the "Humble Approach". A road constructed during drilling by Humble Oil leaves the west side of Chief Mountain Highway about 10 miles from the junction with Highway 89. Follow this road to its end, climb to the top of the ridge to the right to a trail leading above timberline. Edwards mentions an old "Boundary Trail" leaving Chief Mountain Highway north of the Humble road. The trail does not show on the map and Edwards gives no details. From its name, I assume that the old trail roughly follows the Park Boundary. Access to the west side of the mountain from within Glacier National Park is also possible, but this is the long hard way to get to the peak. The mountain can be reached by cross country travel from Gable Pass which is reached by trail either via Lee Ridge, or from the Belly River Ranger Station. This approach involves 17 to 20 miles round trip. Details of the Lee Ridge approach can be found in this Trip Report.

Solid North Ridge Route Class 3 except for the short Class 4 pitch on the summit ridge. This route climbs the north ridge almost to the summit ridge. A Class 4 pitch does in fact lead to the summit ridge, or one can bypass it to the south and join the West Slope Route. Northern East Face Route Class 5. This route attains the prominent shelf near the north end of the east face, then traverses the shelf southward to one of the two chimneys used by the Southern East Face Route. Southern East Face Route Class 4 or 5, the route used by the Stimson party in 1892. The route climbs almost directly up the southern part of the east face, entering a chimney above the prominent shelf about half way up. There are two chimneys, the more northerly one being easy Class 4 & 5, and the more southerly one being fairly difficult Class 5.

Current Entrance Fees Registration for day climbs in Glacier National Park is recommended, but not mandatory. Outdoor Activity Page Includes links to boating, bicycling, fishing, etc. and the regulations applying to each. If crossing trubal land, a Blackfeet Fish and Wildlife Conservation Permit is required and camping is restricted to established camping areas only. At one time, access across tribal lands was prohibited. It is wise to check with the tribal authorities for both the required permit and current regulations before planning to access the mountain across tribal lands.

June, July, August, September, and even into October depending on the amount of snow.

There are numerous campgrounds available within Glacier National Park: Backcountry Camping Page Includes trail status reports, campground availability, daily backcountry bulletins, and a backcountry blog. Car Camping Page There are also many campgrounds just outside the Park on both the west and east sides. Camping on the Blackfeet Reservation is restricted to established campgrounds only. 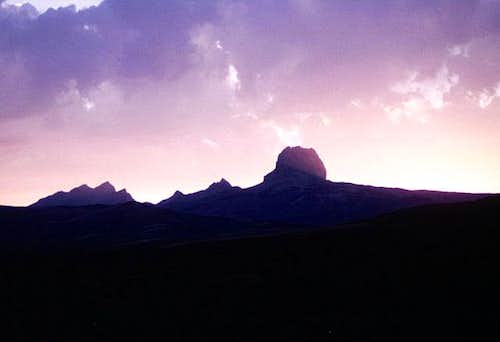