AIR FORCE ACADEMY - It’s easy to forget, as you hike among the quiet aspen groves and pine forests of the Rampart Range foothills,that you are on a training ground for elite aviators who will pilot advanced war machines.

From late 2001 to 2006, the public was not allowed on thetrails at the Air Force Academy, due to the post 9/11-securitycrackdown on military bases.

But in the past few  years, the Academy has poured $300,000 andcountless hours into trail work, re-routing paths and building new segments.Far from keeping the public out, Academy officials now welcome hikers,bicyclists and horseback riders.

“The Academy itself is open to public use, as long as youcan get yourself on base,” said Brian Mihlbachler, with the U.S. Fish andWildlife Service, who oversees the Academy’s trail network.

Getting yourself on base isn’t as tough as it used to be.All you have to do is show a driver’s license or other government-issued ID,pop open your car’s trunk and choose your adventure — be it a long mountainbike ride; a brutal, Incline-like slog up a peak; or an excursion into thenational forest.

Spring is a great time to visit, when Colorado’s higherpeaks are socked-in with snow and it isn’t too hot on these lower-elevationtrails.

Here is your guide for exploring the Academy.

In the heart of the Academy, the Falcon Trail is a13-mile singletrack loop that many consider the Pikes Peak region’s premieremountain bike trail.

The trail was built piecemeal over the years by cadets,employees and others, as riders followed game trails down canyons and up hillsides.Since 2005, the Academy has installed signs and blocked off the many side spursthat were causing erosion. What is left is a great intermediate ride, with onlya few technical sections, through developed and wild areas of the Academygrounds.

“It isn’t really a technical trail, but it’s somethingthat provides a cyclist more challenges than just riding the New Santa FeTrail,” said Mihlbachler, referring to the flat gravel path that runs betweenColorado Springs and Palmer Lake, through the Academy’s east side.

Not many people hike the Falcon Trail, because it makesfor a long sweaty day unless you have a shuttle.

To get there: There are numerous access points, but forthe main trailhead, enter through the Academy’s south gate. Take South Gate Boulevard,which becomes Stadium Boulevard. Turn west after you reach the stadium anddrive a short distance up Academy Drive to a spot where the Falcon Trailcrosses the road. Park your vehicle. 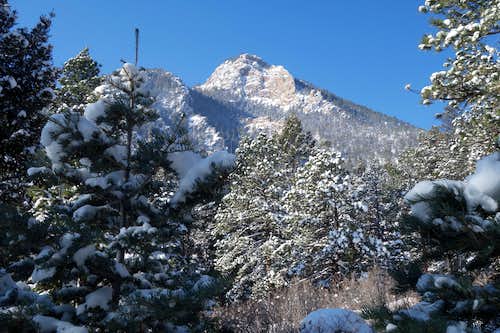 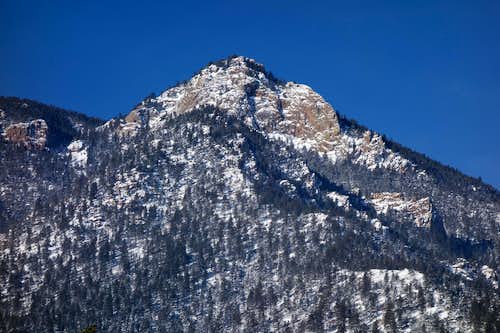 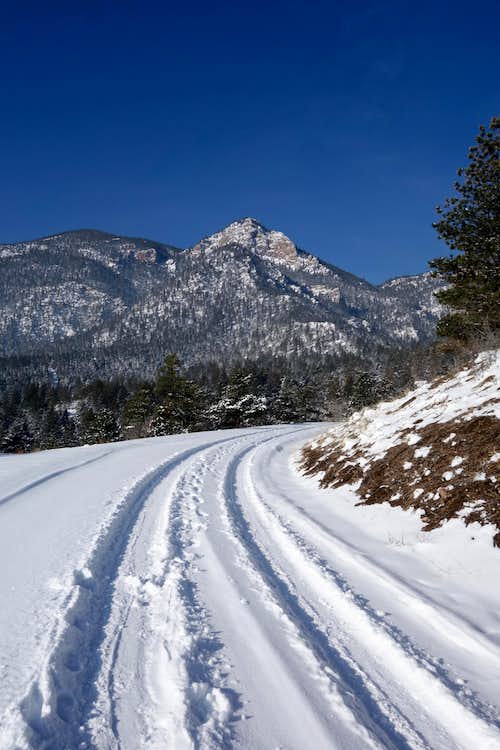 Hovering high above the Air Force Academy on the northernpart of the city, Eagle Peak is not for the faint of heart. Distinguished byits rocky eastern façade, Eagle Peak is a 3.0 mile out-and-back that shoots up1,900 in elevation. Though your legs may want to raise the white flag, yoursenses will keep asking for more. The panoramic view from its summit allows foran amazing snapshot of the Academy’s campus belowonly to turn around and behold one of the most naturalistic views of Pike Peakavailable.

Tech Sgt. Cortchie Welch and his unit once did an ascentof Eagle Peak for “PT,” or physical training.

“I made it halfway,” said Welch.

Such is the workout that awaits climbers on Eagle Peak, ajagged mountain that towers over the Academy. The trail to the top could rivalthe Manitou Incline, gaining 1,900 feet of elevation in 1.25 miles. It is steep— and eroding and needs work.

“It’s a social trail that developed over the years by thecadets and others hiking up there,” said Mihlbachler. “It’s not a verysustainable trail, but it gets a heck of a lot of use.”

Once climbed mainly by cadets, the word is out aboutEagle Peak, thanks to mountaineering Web sites, and as many as 50 people a dayattempt this harsh route on summer weekends. The 9,368-foot peak has dangerouscliffs on its east side, where in 2006 a cadet fell and nearly died. Academyofficials posted a warning sign; most of the route is in the Pike NationalForest.

Frank Landis, a recreational planner with the U.S. ForestService, said the trail is not considered a “system trail,” meaning hikers arefree to use it but the agency does not maintain it. The Forest Service isconsidering adopting the Eagle Peak trail, but the grade is too steep and tosmooth it to the peak’s contours “kind of defeats the purpose of how people areusing it.” 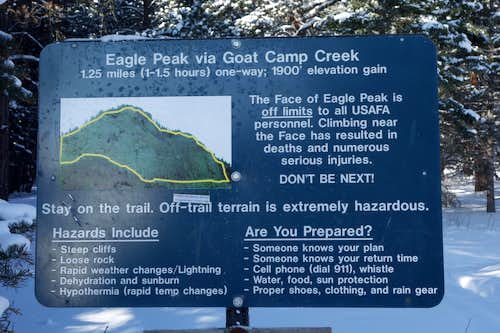 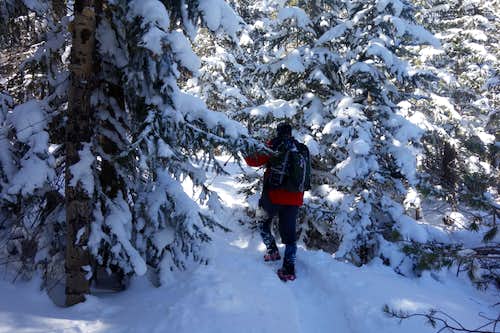 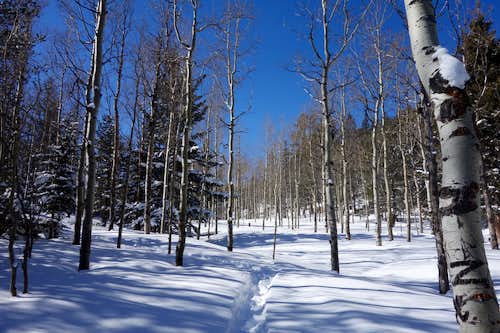 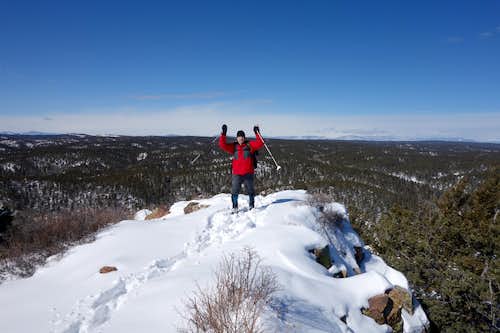 Brain on the summit. 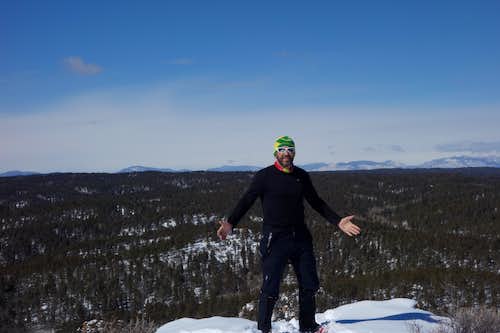 Me on the summit. 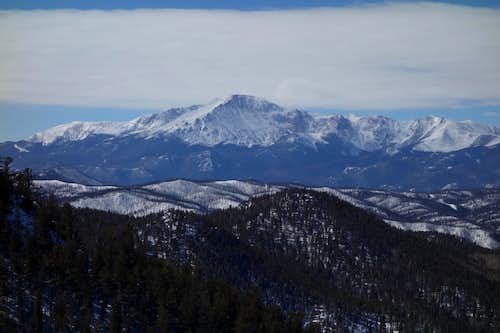 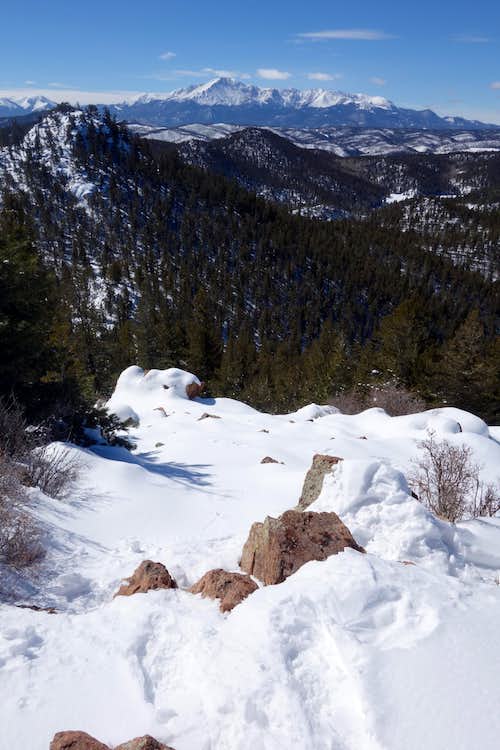 Pikes Peak from the summit. 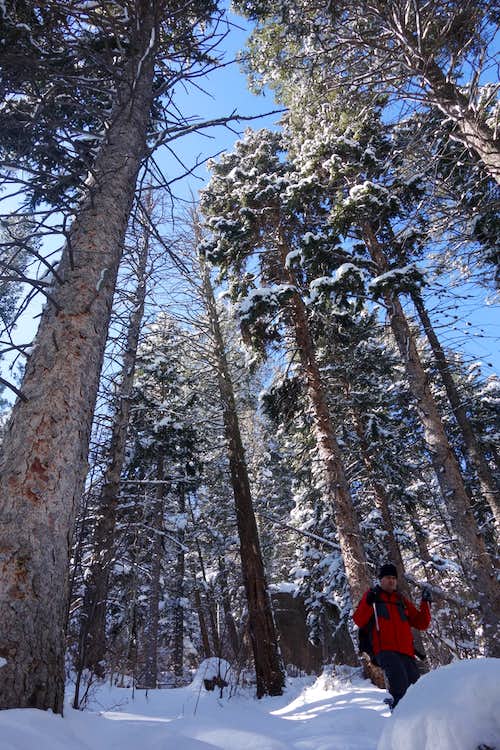 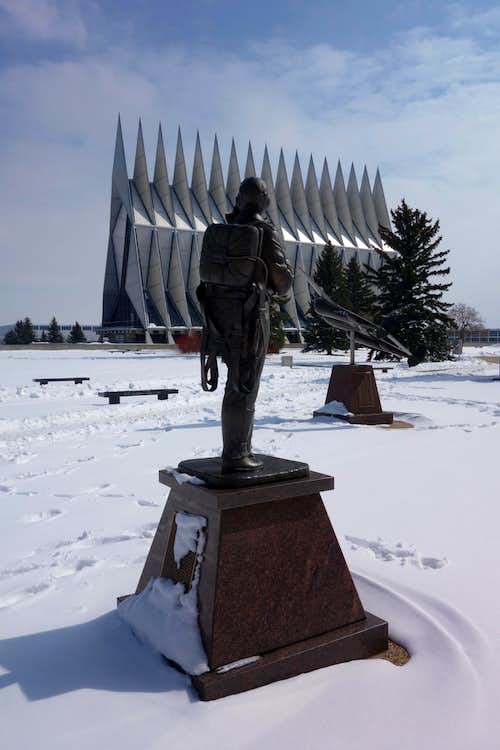 To get there: Park at the visitors center and walk westacross Academy Drive to a dirt road leading up toward the peak. Walk up theroad for about a quarter-mile, veering right at a power transformer, then leftat the next fork. Look for signs at the trailhead.

Two trails start on the Academy’s west side and takehikers for trips into the Rampart Range, where relative solitude awaits.

The Stanley Canyon Trail is a steep, secluded climb to ascenic lake. It becomes Forest Service Trail 707 and climbs 2 miles to StanleyReservoir, and ambitious hikers can continue 5 more miles to the Academy’sFarish Recreation Area, a hiking, camping and picnic area open only toactive-duty and retired military and their guests and Department of Defenseemployees.

To get there: From the south gate, drive north on SouthGate Boulevard to Pine Drive. Turn left onto Pine Drive. Go 3.9 miles to anunmarked dirt road on the left. Turn left and drive 0.7 miles to the trailheadat the end of the road. Hike starts through a metal gate.

The other trail, a little further south, goes up the WestMonument Creek drainage. Hikers must skirt a water plant, and can then hike toStanley Reservoir, making for a long but doable loop back to the Stanley Canyontrailhead. Get back to the car by hiking for a bit on the Falcon Trail.

To get there: From Stadium Drive, turn west onto PineDrive. At the fire station, after about three miles, turn left onto WestMonument Creek Drive. Drive about a mile. Just before a gate closes the road,look for a dirt road on the right. Park here but don’t block the gate. Followsigns for Trail 713 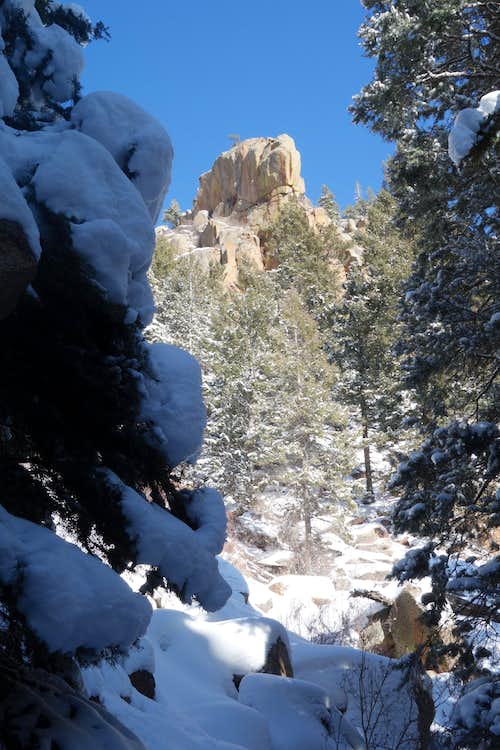 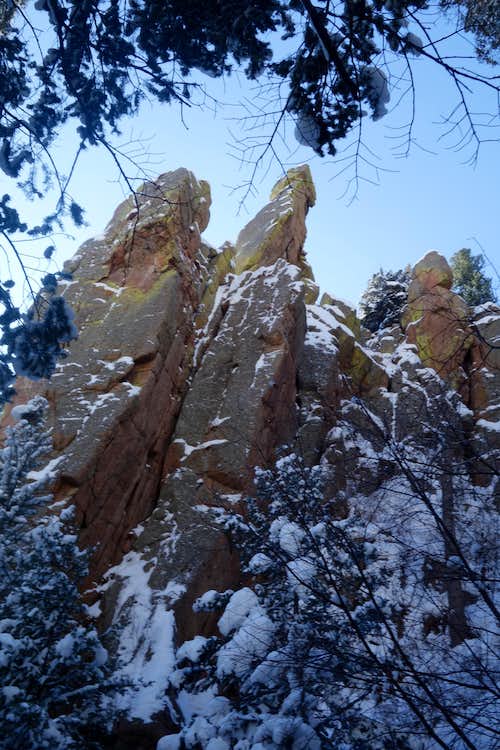 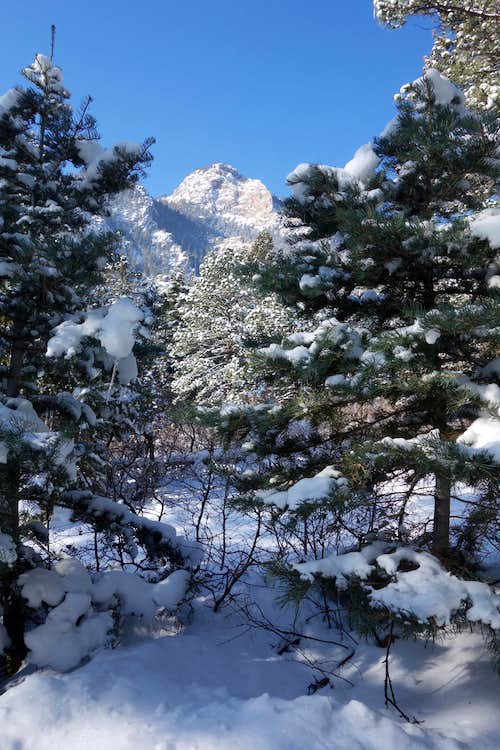 The peak itself of west of the Academy reservation, but since the trailhead's and part of the trail lie on military land, Eagles Peak can be restricted in its access. For the most part though, it is publicly accessible due to its location on the tourist accessible portion of base. 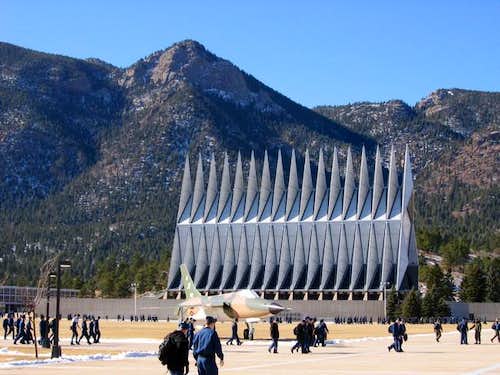 Eagles Peak rises above the...

Eagles Peak can be climbed year round though it is usually climbed more often in Summer and Fall. During Winter and Spring, snow and ice tend to collect in the gully, making for a more interesting adventure.

Panorama from the summit.