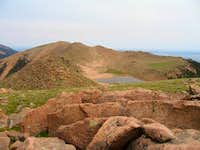 In April of 2012, I adopted this page from mmoerk. mmoerk was critical in building the foundation of Colorado Springs area peaks on SummitPost, contributing many of the region's keystone peaks (such as this mountain). Thank you, mmoerk, for your pioneering hard work showcasing the beautiful summits in our metro area. 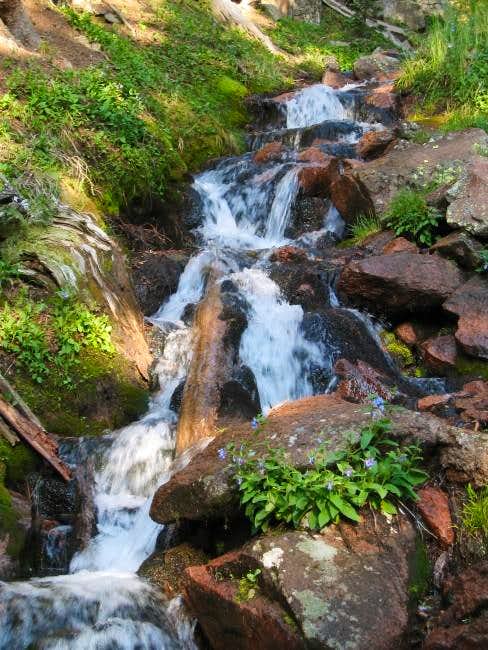 Almagre Mountain is the 2nd highest peak on the Colorado Springs skyline, and one of only a handful of peaks in this vicinity rising above treeline. In spite of this, Almagre doesn't get much attention, and many locals are not even be able to identify it. This is probably due to the fact that only the highest part of the mountain is visible from town, and its summit is relatively flat and looks less dramatic than Pikes Peak or Cheyenne Mountain.

There is a 4WD road that climbs almost to the summit, so in that sense the mountain is quite accessible. For those that are more sporting, the summit can also be reached by trail without having to hike along the road. Due to the abundance of 4WD roads at the base of the mountain, there are surely even more routes that one might envision. If you've climbed any routes not listed here, please submit your route.

Except by those who drive up and climb the 500' or so to the summit, Almagre is not frequently climbed. Among other things, this could be due to the fact that the trail to Stratton Reservoir is not even on most maps (it is on the Pikes Peak Atlas, however). In spite of the road, don't expect a crowd at the summit. Pikes Peak this is not. Many people simply drive to the gate and turn around. A few will venture on to the reservoir, and fewer still take the time to climb to the summit. You might climb the whole way and not see another person.

Some people refer to Almagre as "Mount Baldy". In fact, Baldy is a sub-summit of Almagre. The true summit is to the north of Stratton Reservoir, while Baldy and the communication towers are to the south.

The views from Almagre are exceptional. In addition to an aerial view of Colorado Springs, you'll have an up-close view of many of the mountains that you may be used to seeing from town, including Pikes Peak, Mt. Rosa, Cameron Cone, Cheyenne Mountain, and many others.

I hiked the mountain on Saturday September 11 with my friend Paul. One mile from the gate on 379A(the last road) there was a rockslide my Ford Ranger 4X4 could not fit through. The trun around was very scary. Larger trucks would have even more difficulty. PLEASE park where 379 and 379A intersect until the slide is repaired.
skorpeo

Brother, Could you be a bit more specific??? =) Sarah

Thanks, Jer, I took care of the broken links section. Broken links, unfortuntely, are the reason I'm hesitant to ever link to other trip reports, etc., in my pages. Sarah