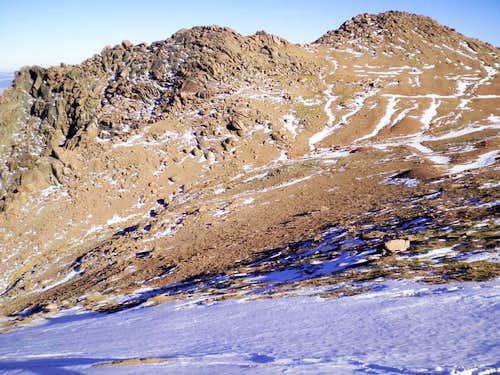 This peak may lack an official USGS-recognized name and not even be ranked per the 300-feet of prominence rule, but it sure offers fantastic views from its rocky summit. Nicknamed “Little Pikes,” (or sometimes “Little Pike,” without the “s”) this rocky jumble of Pikes Peak granite rises over 13,000 feet into the sky northwest of Pikes Peak. Over the dramatic terrain to the east the Rocky Mountains sooth themselves into the Great Plains while to the west the mountain and valley views roll on forever. The bulky mass of Fourteener Pikes Peak rises to the southeast, while Pikes Peak Highway traffic hums along, tourists’ engines straining up steep grades in the thin air. Prayer flags strung at the summit between massive blocks of granite flutter in the breeze.

Whether visited as a side trip to/from the Pikes Peak summit or as a
destination of its own, a visit to the top of “Little Pikes” will give you a place to call your own for a while as you savor views of the surrounding terrain. 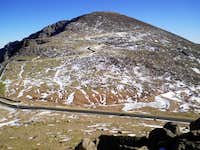 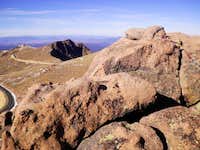 “Little Pikes” sits in far northwestern El Paso County, just to the southeast of the corner border with Teller County. Primary access roads are the Pikes Peak Toll Road (for those wanting to drive most the way to the summit), Hwy 67 to the west and Hwy 24 to both the north and east.

Fire to the west 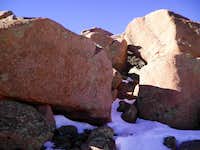 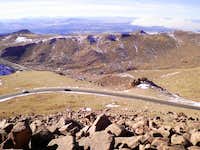 West from the summit
If accessing “Little Pikes” on foot via a hiking approach, there are no fees to access the area. The biggest red tape to be aware of is to ensure you do NOT walk along the Pikes Peak Toll Road and cross only in designated crossing zones. 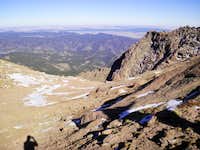 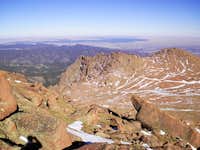 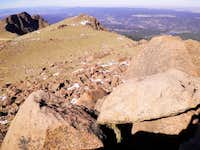 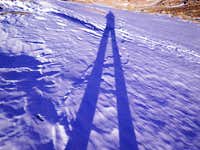 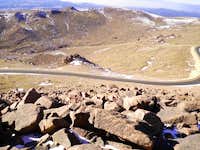 The Pikes Peak Highway below
NEARBY NATIONAL FOREST CAMPING
The National Forest Service’s Crags Campground sits on the western slope of Pikes Peak and provides a convenient campsite option for anyone visiting “Little Pikes” from west. This 17-site campground sits at 10,100 feet in elevation about 8 miles south of Divide.

Those planning to ascend “Little Pikes” via the “4 tires and a steering wheel” route can find a broad range of lodging options in Colorado Springs and Manitou Springs. If you are the 5-star luxury type, be sure to check out The Broadmoor. 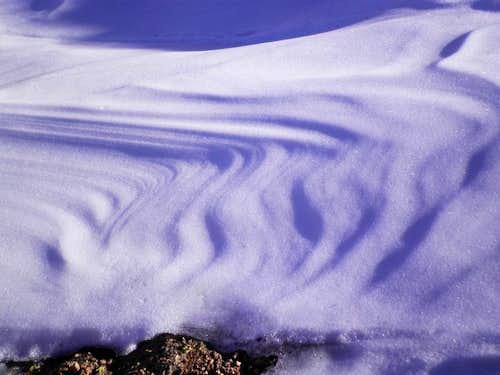 ”Little Pikes” is essentially a sub-summit Pikes Peak. As Pikes in the largest landmass for miles around, it is known for somewhat volatile weather. “Sunny and warm with a gentle breeze” in Colorado Springs does not always translate to the same conditions at 13,000 feet on the western slope of Pikes Peak. Check the forecast before departing for your trip and constantly take a read on the weather, noting changes and patterns.

•Summer all but guarantees dense crowds and the dreaded afternoon thunderstorm. Start your day early and anticipate sharing the mountain with plenty of folks.
•Fall means shorter days, but also less afternoon thunderstorm threat. The aspen on the lower reaches of the mountain will delight, as will the orange-tinged alpine tundra. This is the high country, however, so be alert to rapidly changing weather and snowfall, even when the weather in Colorado Springs is quite pleasant.
•Though the western slope is known by many as the “snow route” on Pikes Peak, never underestimate the capability of the flaky Colorado powder pack to hold avalanche danger. Travel during Winter and Spring, when snow is present, should be undertaken with caution. Note that on the Pikes Peak Massif, “west-facing” does not always translate into “windblown / free from loading.” In fact, the western slopes of neighboring Almagre Mountain and South Almagre regularly build up pillows of wind-loaded drifts on their western aspects just waiting for the right trigger to slide.