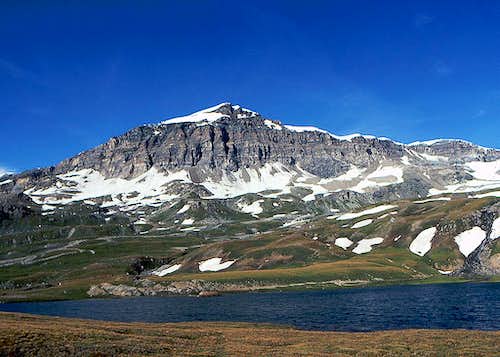 From the summit of Matterhorn, the main ridge of Pennine Alps goes towards Breithorn at first in the south-eastern direction. The sharp Furggrat of Matterhorn ends at its bottom on Breuiljoch / Colle del Breuil, 3323 m, then after a ridge bump (3349 m) Furggjoch / Colle di Furggen, 3271 m, comes. The continuation is known as Furggrat (The Ridge of Furggen), which culminates on the summit of Furggen, 3492 m. There the arc of this long ridge turns in the eastern direction, rising at the end on the summit of Furgghorn, 3451 m. After the next summit, Cima del Breuil, Furggsattel, 3349 m, comes, then Theodulhorn, 3469 m, and south of it the lowest point in the whole ridge between Matterhorn and Breithorn, Theodulpass, 3301 m.

The ridge of Furggen is one of those secondary mountaineering goals above Cervinia/Breuil and Zermatt, which in the light of giants like Matterhorn or Breithorn are never mentioned. High on the ridge cable cars are reaching. Actually, on the nearby Theodulpass and Furggsattel they come just on the ridge. That is why the majority of visitors take a drive up there, do a photo or two towards Matterhorn and then they ski down in one valley or another. In summer it's a bit different, but due to degraded nature these summits are not much visited. Still, it is nice to go on Furggen if we have a spare day, or at least half of it, when for example nice weather is building and we just want to have a look "there over". So, Furggen is the first important, higher summit in the main ridge of Alps east of Matterhorn. Ascending it, we get just to the base of Matterhorn. Mighty are its walls and the views up are breaking necks. Breuiljoch and Furggjoch once represented important mountaineering passes from Cervinia/Breuil to Zermatt. Nowadays people use of course cable cars. But the ridge there is still relatively easily reached. 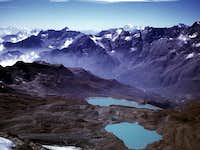 From the ridge of Furggen by all means the most attractive is the view on the nearby Matterhorn. Even if we know how sharp it is, we are still surprised by its regular pyramid which is additionally sharpened with the summit needle. If it would happen that an extreme skier would just at that time do the descent over its eastern face, we would be able to observe the action from the first class viewpoint. In southern walls climbers are quite rare. From the ridge we have also a wonderful view on the other summits around Zermatt, including the already a bit remote Mischabel Group and of course Monte Rosa group. Towards the south, the long Valtournanche stretches, being surrounded by its mountains.

On the ridge of Furggen we can climb either from Zermatt or from Cervinia/Breuil. I know only the routhe from the south. From Zermatt, the majority comes on the ridge in winter, but I have no information how hard is the eastern part of the ridge - till the highest point. If you have information, please add it! 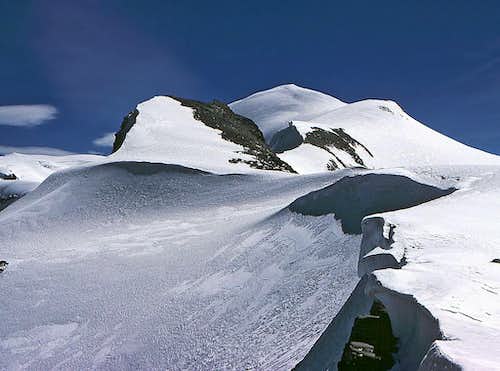 If we don't take a cable car, we shall start the tour just in Cervinia/Breuil, on 2006 m. From the town we can see how a broad path is ascending towards Duca degli Abruzzi hut. We don't need to go just to the hut, but that variant is equally good as the more eastern one. So, we go towards the north-east, on Plan Torrente. Also walking up towards the cable car station on Plan Maison (more eastwards), would be ok. In any case, we then take the marked path into the valley between Matterhornom on the left and Furggen on the right. So we reach just below the south wall of Matterhorn. Ghiacciaio della Forca has no crevasses, so the ascent where we walk over snow fields makes no bigger problems. It is best to keep right and perhaps first reach the Furggjoch, to have a look on the other side. From the ridge we have a fantactic view also on Matterhorn.

The highest elevation of Furggen is still far towards the right. So, we reach the summit from the north-western direction. Where the ridge is steeper, we keep on the Italian side of it.

Descent. We can of course descend by the same route, but if conditions are good, we can aim towards Cervinia/Breuil more directly. So, we descend a bit towards the west and then start searching the best passage directly towards the south. A part of the slope is quite steep, but later we have no more troubles till Plan Maison. The whole tour is not demanding, but we do 1500 m of altitude. Count on some 4 h 30 min for ascent and an hour less for descent.

If you are knowledgeable about the ridge of Furggen and you want to edit or take over this page, please let me know.