Hidden Falls is a secluded, steep three pitch ice climb amidst the hustle and bustle of Glenwood Canyon. This climb is rarely done due to the often hideous approach but if conditions are good, it is well worth it. This climb is especially fun as it takes you nearly the entire way to the rim of GLenwood Canyon offering awesome views and a surprisingly alpine feel for a climb so close to an interstate. The potential crux of this climb is crossing the Colorado River and the subsequent trespassing on the railroad. This climb requires you to be discrete and thick skinned. If a train or rail car does come by while you're anywhere near the tracks, the police may be called. Consider yourself warned. 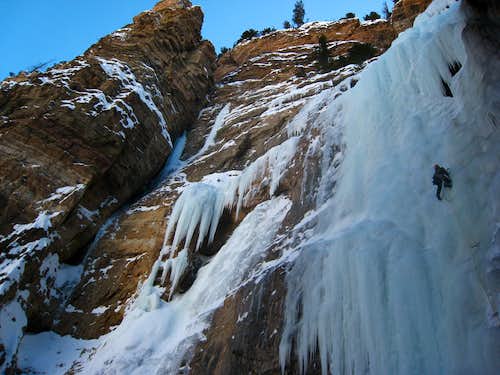 Begin by first heading along the bike trail to cross the raging creek that is released by the power plant. The gate for the bike trail will probably be shut and a sign stating the trail is closed so you'll have to climb up and around it along the concrete handrail, completely ignoring the sign. I don't believe it's unlawful to do this since the bike trail is not on private property. Cross over the river that drains the power plant, and hop over the handrail and descend large boulders to the Colorado River. Usually, the river immediately upstream of the power plant flows very slowly and is quite shallow so it will freeze over, allowing you to walk across. If it's been warm though, it may be thin ice or not frozen at all so you may have to come prepared with waders or even cross barefoot. Some parties have even crosses on small rafts which they would leave on the opposite shore for the return crossing. Also important to note that the river may not be frozen on your return trip it it was cold in the morning but warmed up later in the day.

Once on the other side you can either hike on large boulders right along the south side of the river or head right up to the train tracks. If you stay along the river, the boulder hopping is terrible and will take twice as long but you are safe from being caught by a train. It's a third of a mile downstream (west) from where you cross the river to the point where Deadmans Creek drains into the river. If you climb 30 feet up to the tracks right after crossing, run alongside (not on) the tracks for 1/3 mile. More often than not you will get lucky and miss the trains, especially if you go early in the morning (twilight) and return after 5pm. However, if a train does come the conductor may call the cops because it's on private property so pick your poison. It takes at least a half-hour to get from the parking lot to the mouth of Deadmans Creek.


Deadmans Creek is the first major drainage you come to heading south and is 1/3 mile west of your crossing. Leave the tracks and begin slogging your way up the drainage. It's a long 1,000 foot climb to the base of the route which typically takes 1-2 hours from the train tracks. If the snow is deep, the slogging will start right away so consider snowshoes. The easiest way seemed to be on the far left side of the drainage to pass through the bush and small trees. Halfway up after about 500 feet, you will reach a large, open talus slope where you'll want to cross over to the right side and continue up the drainage. There are numerous downed trees, bushes and large boulders to negotiate. When you come to a side drainage veering sharply left, stay to the right and ascend more open terrain as the drainage narrows and reach the base of the route. Although you can see the upper pitches of the route from the road, you won't be able to see it again until within a few hundred feet from the base.


This is the meat of the climb and is by far the longest, most sustained pitch. Looking up from the base, the easiest line is up the right side of the flow, which is a full 50-60 meters of sustained WI 4. This line isn't ever truly vertical but it is close (80-85 degrees) the whole way. About 75% up the main flow, there will be a 30 foot vertical section that you can either climb directly (WI 5) or traverse right past the cave and up the ice to the right side of the cave. Do Not belay from inside the cave, instead belay about 30 feet above the cave where the terrain mellows.


The further left you go, the harder the climbing is. The center of the main flow is a WI 4+ and the left side of the main flow is WI 5. You can also climb a combination of free hanging ice pillars with mixed climbing on the wall further left (WI 5 M6...see the photo above in the overview section). The mixed lines to the left will also require rock pro. Upon reaching the top of the main flow (above the cave), set up a belay on a decent ledge where the ice mellows using screws. You will not be able to reach any trees with 60 meter ropes so come prepared with screws and the knowledge on how to make safe belay anchors in ice.


This pitch is shorter and starts by traversing back to the left around a large bulge back to the center of the flow and continuing up good WI 3 ice for about 25 meters to the large snowfield separating the second and third pitches. This snowfield can be chest deep powder offering no protection, or firm and even icy in the 50 degree steepness range. You will have to work your way up this snow slope to one of the trees to make a good belay anchor. There is a large tree with slings off to the left but this one is precariously located right on the edge of the cliff. Near the base of the third pitch, 50 feet or so up the snowfield there is a set of trees further to the right that I recommend. 60 meter ropes will reach. Use caution not to send snow cascading down the main flow to your belay. From here you can see the third pitch which ends abruptly about 50 feet below the rim under a gigantic overhang.


This pitch actually sucks as the ice isn't typically in good condition. If this is the case this pitch isn't recommended. It's formed from water that seeps out of the thick mud that extends well below the rim of the canyon. There is a bolted anchor somewhere in the mud but rumor has it they are not to be trusted. If you do climb this pitch, you will likely have to anchor yourself, make a V-thread and rappel back down to the snowfield.

From your tree anchor at the base of the third pitch, rappel down the main flow with double 60 meter ropes all the way to the ends (tie knots!). Make a V-thread and make a second 50 meter rappel to the base of the route. Return the way you came taking extra caution re-crossing the Colorado River. 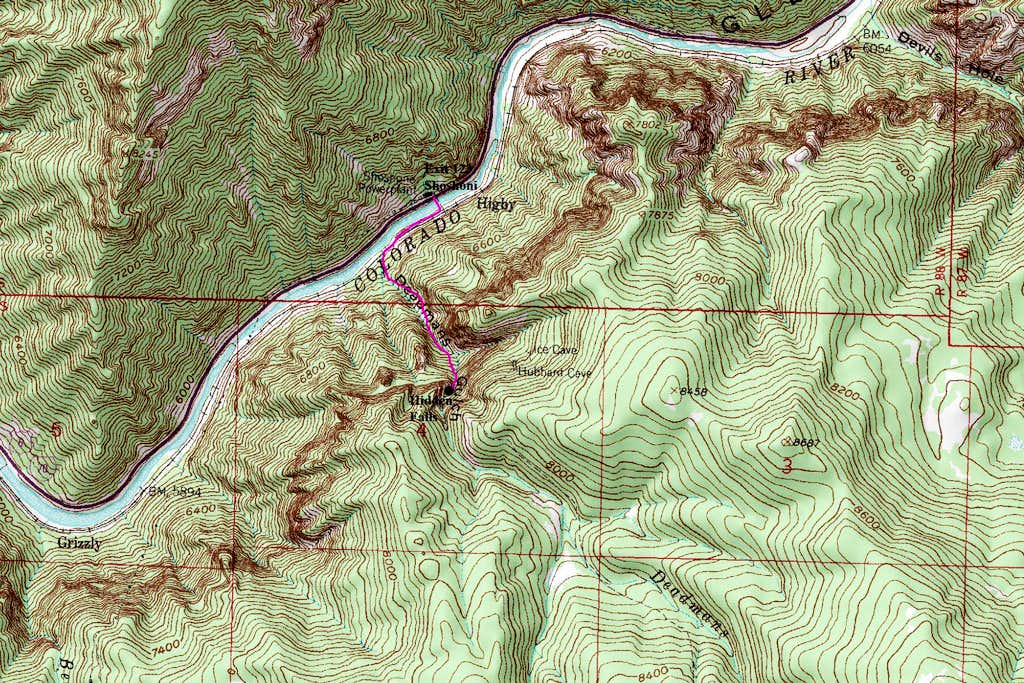 Bring ice tools, crampons and stiff boots, double 60 meter ropes, 10 ice screws of all sizes, helmets, and maybe snowshoes if there is a lot of snow. The route faces north so it never sees any sun in the short winter days so be sure to also have plenty of warm clothing.

The "Colorado Ice" book (Volume 1) by Jack Roberts has a good description of the route.