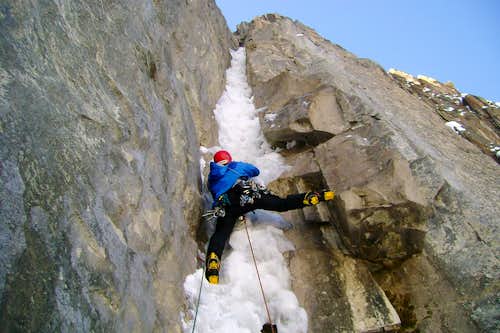 Ames Ice Hose Pitch 2 - Michael J leading
Many climbers consider Ames Ice Hose one of the Top 5 routes in the San Juans. Cam Burns calls it the area's classic hard climb. Jack Roberts says don't even pretend that any pro on Pitch 1 will hold a fall. Try it anyway. Michael Ybarra
I will keep this page up to date, but it should always belong to the original author Michael J Ybarra, a freelance writer for both Alpinist and The Wall Street Journal, who died during a solo climb along Sawtooth Ridge, in Yosemite California in 2012. I never met him, but I read various articles about him on-line. He sounds like he was a very interesting man. Thank you Michael for your contributions to the climbing world.
The San Juan mountains are an ice climber's paradise, and not just because of the ice parks - one at Ouray, and second at Lake City, (and there may be soon another ice park at Eureka, just outside Silverton). The San Juan Range also has many beautiful back country ice climbs. Ames Ice Hose is one of the most popular and prettiest ones. Ames Ice Hose is not an outing for a beginner climber, it is a serious climbing adventure.
Telluride is home to two famous and classic ice climbs: Bridalveil Falls and Ames Ice Hose. If there would be a list of the most famous ice climbs in Colorado, I bet Ames would be somewhere near the top, possibly even number 1. The elegant ribbon of ice running the length of the cliff can be nicely seen from the Colorado 145, just past the Mountain Village. There is a large pull out on the road, and a great view point of the climb. Even better spot to study the line and watch climbers is an Illium Road 63 L, which run below and parallel to 145, just closer to the falls. The Illium Road is open year round and although it is a dirt road most of its way, it is passable for 2WD vehicles.
First Ascent: Michael Kennedy, Steve Shea, Lou Dawson in 1976
Length: 200 meters (600 feet)
Pitches: 3, all long and sustained
Conditions: variable, the guidebooks are describing thinner ice and sometimes rock climb on the first pitch, however the last 2 years the climb came in fat and in full ice conditions making it much easier. (I did climb it in much easier full ice condition, more likely WI4+ and completed the climb under 3 hrs including the rappel).
Guidebooks: Colorado Ice Climber's Guide by Cameron Burns and Colorado Ice by Jack Roberts (Jack Roberts died on above mentioned Bridalveil Falls). 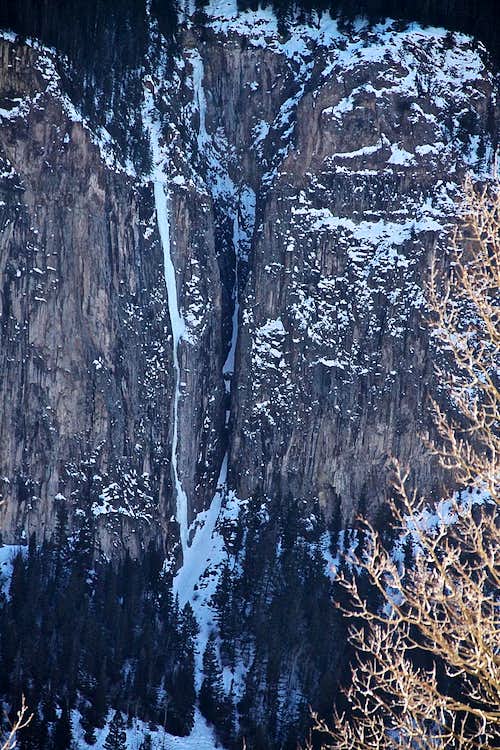 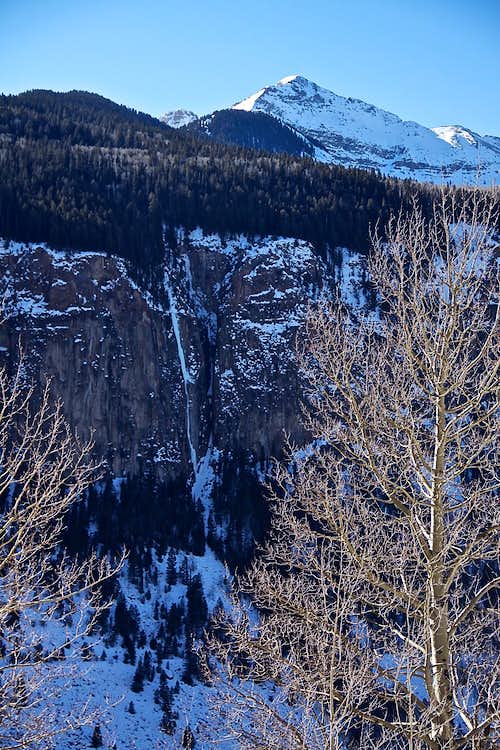 Ames Ice Hose WI5/M6 with Sunshine Mountain in the background
From Telluride, take 145 south past Mountain Village for about 20 minutes until the road heads down hill and you come to the signs for Ophir (left) and Ames (right). You should get a good view of the route from the crest of the road. There is a nice pull out on the road and a great vantage point to oversee your destination.
Head down the hill toward Ames. Take the first left (that is, the first left that isn't a driveway) and park at the Ames power plant. Ames Station is the world's first generating station to produce and transmit alternating current. It was first built in 1891 to power the Gold King Mine.
If you'll lucky, there'll be a trail broken to the left of the parking area. There are signs NO OVERNIGHT PARKING. Parking is free, and it can accommodate several vehicles. If many cars present, consider other climbers on the route. It is very popular. Telluride outdoor sports brings their clients here for learn ice climbing on Lower Ames Falls. You can drive on Illium road and check out whether there are climbers up there.

Follow a path behind the power station, past an old cabin, and past the lower Ames falls = Ames practice area (cca 5 min), then past Ames Falls WI4, a fun and steep one pitch route. Cross the South Fork of San Miguel River - typically a frozen bridge just above the Ames Falls, and head up the steeper slope towards railroad grade Galloping Goose trail. (Galloping Goose Trail is very popular with mountain bikes in the summer). Traverse to the right alone this railroad grade and slightly downhill until you come to the gully below the climb. Slog up to the obvious start. Be mindful of avalanche danger. This section may be also ice in dry conditions, consider putting crampons on. You cannot see the ice climb from the Galloping Goose trail, pay attention to the turn off - typically a relatively large gully with a well worn trail.
Approach Time: about one hour, could be longer if you have to break the trail in a deep snow. 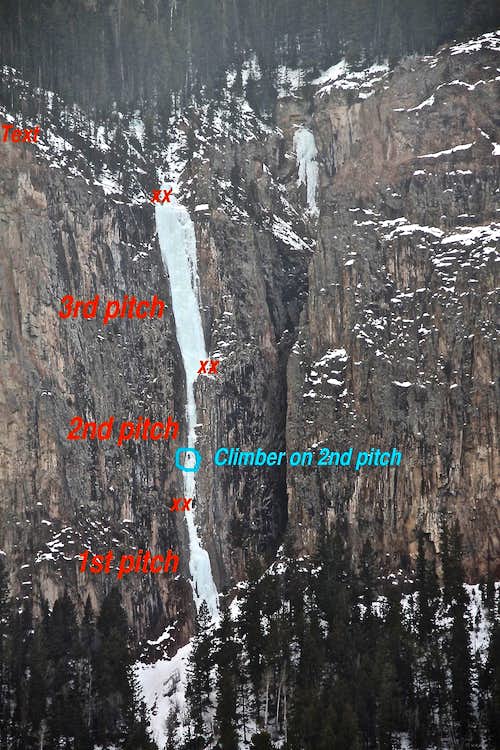 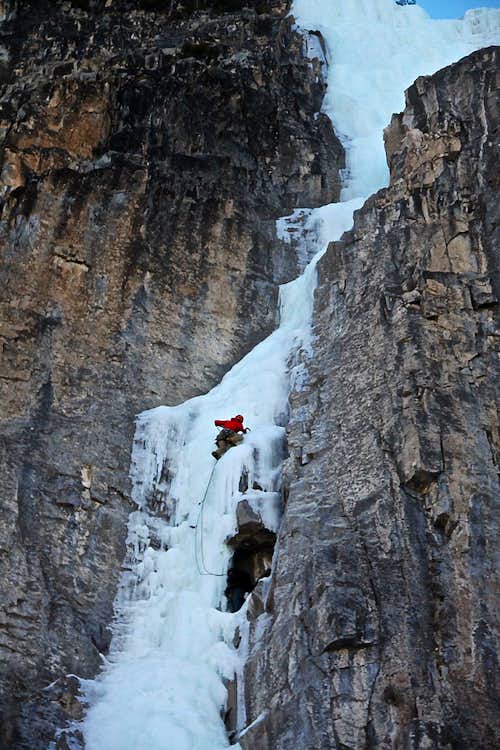 Ames Ice Hose 2nd pitch
Legth: ~ 200 meters (600 feet)
Season: November through March/April (expect thin and more difficult conditions early in the season)
Avalanche Danger: moderate, sometimes even the approach gully can slide.
Access Issue: none
Pitch 1 is usually the crux. Conditions vary greatly but expect steep, thin ice and only marginal pro until you no longer need it. A rock variation to the right supposedly goes at 5.8/5.9.
About 30 feet off the deck the angle kicks back. Follow easy terrain to a bolted anchor on the left. This left anchor can get hammered with ice from above and in "fat ice conditions" there is sometimes an ice cave on the right with one old piton, which is more protected from falling ice. Obviously, you should enforce this one piton with ice screws to create a solid anchor. Rated per conditions as W4-5 M6R.

Pitch 2 is a rope stretcher. Climb thin ice in a narrow chimney, stemming on rock. Again, conditions vary drastically. My partner said the first time he climbed it he could only get in a tied-off stubby and a knifeblade to protect the steep crux. When I led it I got pretty good screws and a couple of cams (BD .5 and 1).
After the last steep ice step, follow a snow ramp to the base of the (usually fat) pillar, looking for a fixed anchor on rock to the right. You might have to dig in snow to find it. A decent crack will also take a couple of big nuts. (Michael)
Often climbers use tools in the ice and step onto the rock. I found this pitch as the most enjoyable one. (Liba).

Pitch 3 is another rope stretcher. Climb good ice to slings on a tree. The pillar is often wet and running, sometimes it can be pretty wide. It is much steeper than it looks. This section looked very deceiving. Expect a lot of pumpy WI4+ moves without any rest. Length: 65 meters (we had to simul climb a little bit to reach the tree anchor).

Descent: Rap the route with double ropes, 60 meters each. Total of 3 rappels from fixed anchors (first one from a tree with slings).
There are a couple more anchors along the way, so I am assuming you may be able to get by with one 70 meter rope, but I would recommend to use doubles (more safe with ice).