gimpilator
Add photos See all photos
Sustained good weather, finally! It was going to be a big weekend. North Twin on Friday, the south buttress of Cutthroat on Saturday, and Big Kangaroo on Sunday. Natasha (Summitpost member seabadge) and I left the house at 4am Friday morning, the car loaded with gear and food. Little did we know, our plans for the weekend would be changing.
We reached the gated logging road at 6am and found that it was open. We were tempted to drive through it rather than bike the 7 miles each way, but we didn't want to come back to a locked gate and get stuck. I fought the monotony of logging roads by seeing if I could ride all the way to the North Twin spur road without pushing the bike up the steeper parts. I was successful in that little game despite the 2300 feet of elevation gain.

After hiding the bikes in the bushes, we followed the spur road to the subsequent boot path which terminates in class 2 terrain at which point the west ridge narrows. Class 2 interspersed with class 3 moves quickly turned into solid 3 scrambling. Olivine rock is the most grippy stuff I have ever set my hands on. Good holds seem hand-crafted and just about everywhere. This is what makes the Twin Sisters range my favorite scramble playground, this being my fourth trip to the area. We used mechanics gloves to protect against the rough sticky rock. 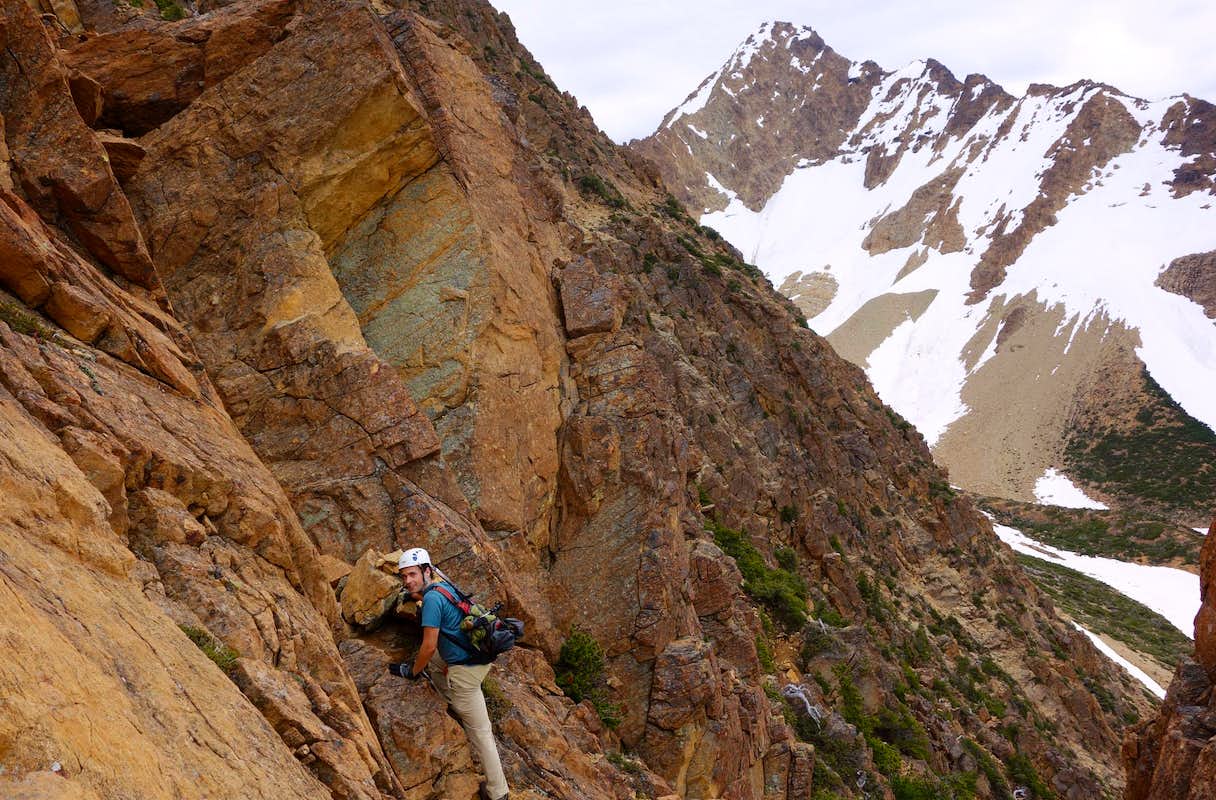 gimpilator route finding
As with the South Twin, difficulties on or near the crest can be avoided by traverse-scrambling slightly lower on the south face. Natasha joked around by faking tough bouldering moves on the easy terrain while I recorded numerous short clips for a video montage. Occasional cairns hinted at the route as we followed exposed ledges and crossed numerous ribs and gullies high on the south face. Eventually we came to an obvious end to the lower traverse options. What appeared in front of us was a drop-off. It was time to go straight up, back to the ridge crest.

There were several possible lines. All appeared to be a mix of class 3 and class 4. We picked what looked like the easiest and made adjustments as we climbed. We passed several more small cairns, somewhat encouraging.

Natasha asked me if she should stay further back in the gullies in case of rock fall. My reply was that sometimes it's better to stay close behind, so that if a rock gets going, it doesn't have time to build up speed. Overall the rock was very solid but a few loose pieces were present in the gullies. She stayed close behind and I was careful not to dislodge anything when I was leading. 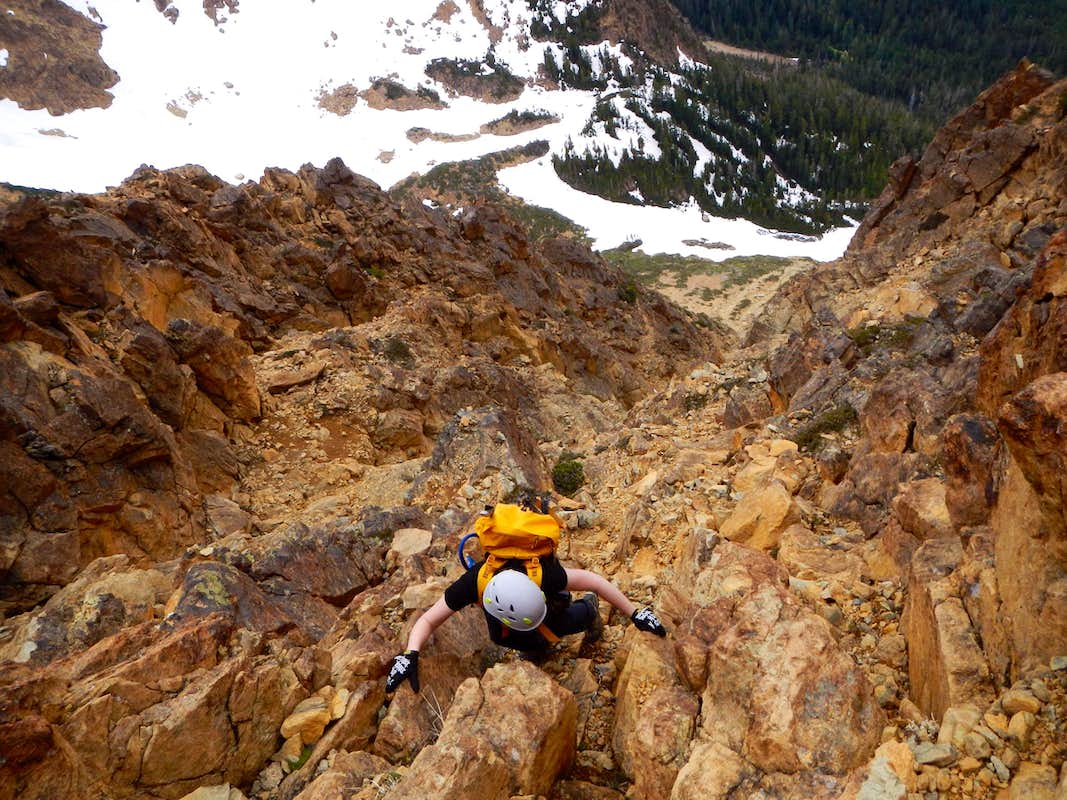 Exposed Scrambling
I was just mentally congratulating myself for not sending any rocks down, when I heard Natasha yell out in pain. I turned around and she said, "I just broke my finger". What!?! She was in the middle of a class 4 section which looked precarious from my vantage right above her. "I think I broke my finger, I really need to get through this tough spot". She struggled to get through the difficult move without the use of her left hand. Eventually she made it through and rested on a small ledge next to me. She told me that I had dislodged a fist-sized rock and that it had fallen just 4 feet and landed squarely on her left index finger.

Damn it! I felt terribly guilty and also worried about how we were going to get her off the mountain safely if she couldn't even use her left hand. Scrambling back down the west ridge would be impossible for her. There was only one option. We would have to descend the very steep snow slope on the north ridge. Thankfully we had the gear for it. But if a fall occurred, would she be able to arrest it without a strong left-handed grip? I knew the snow on the north ridge was extremely steep at the top and accidents have happened there before. Better not to think of such things. 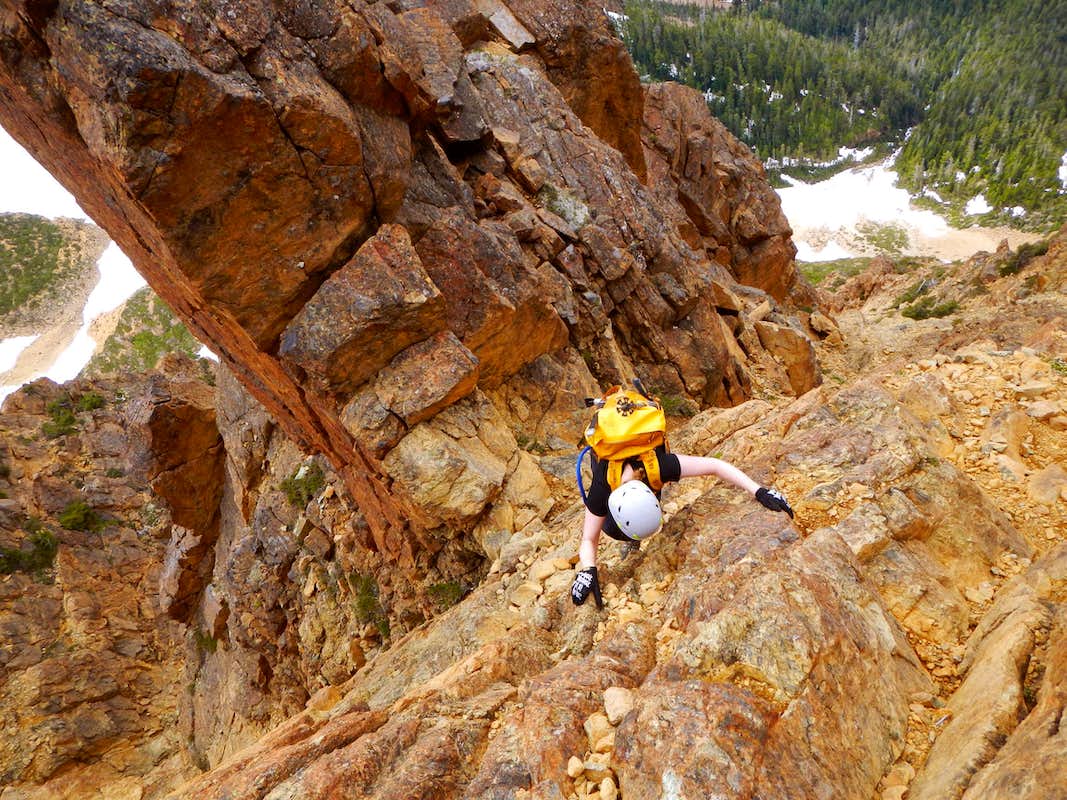 The crux section of the west ridge route
First things first. We had to finish this present route before we could even reach the north ridge snow slope. Natasha was temped to take the glove off immediately and examine the damage. I thought it was a bad idea and said so. I didn't want the sight to freak her out, and furthermore we needed to finish this exposed scrambling before the swelling got worse. In my estimates, we were only a few hundred feet below the summit. I offered to let her lead at her own pace and without any more rockfall danger, but she preferred to follow me. Natasha fought through the pain and made it to the top.

We found a spot out of the wind and gingerly removed her glove. The finger was ruptured, split open from the nail to the second knuckle. On the under side, a sliver of bone appeared to be protruding from a small hole. A compound fracture? I could also see signs of some internal bleeding. There was another hole at the tip of her finger where blood had actually exploded out from the pressure of impact. I gently wrapped the finger in gauze and then gingerly helped her put the glove back on, for some minor protection.

We didn't waste anymore time. We put our crampons on and got the axes out. She would now have to downclimb the north ridge snow slope facing-in. There were no other options. I led down, double-kicking each step to make sure they were bucket deep and secure for her. She did amazingly well on the descent. She said that the cold from the snow was actually helping her hand. After descending 300 feet, the slope lessened and we were able to turn around and face out which made for faster progress. 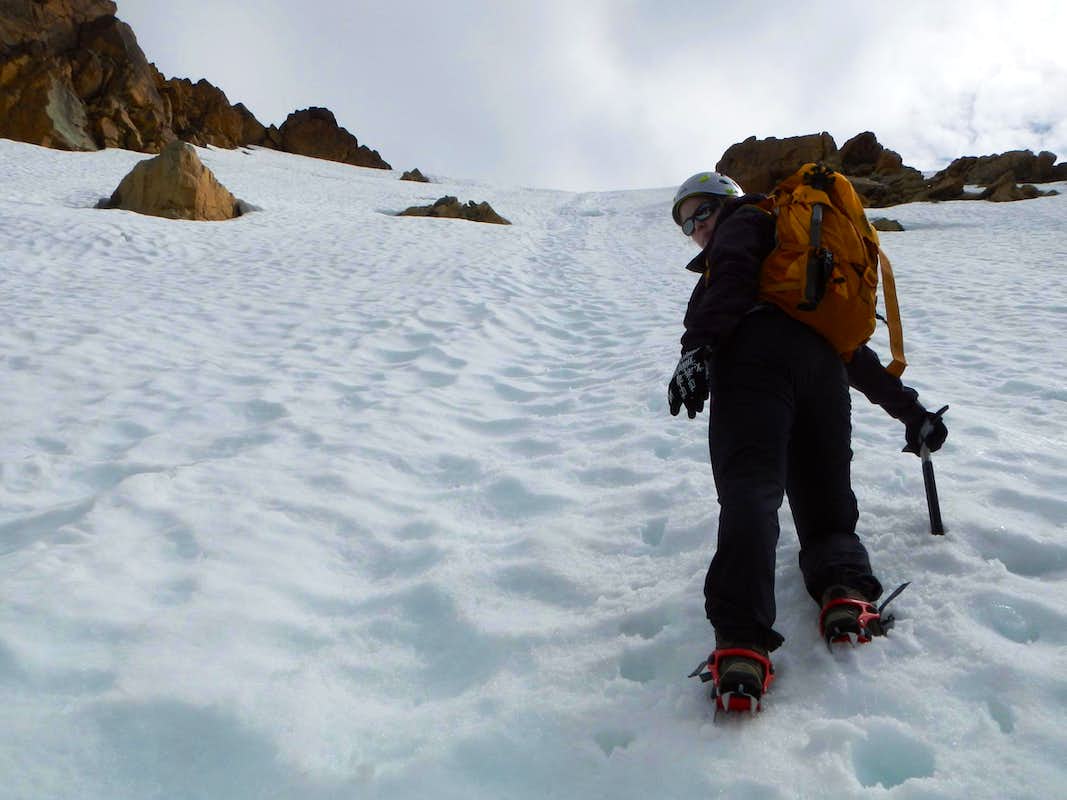 Downclimbing Steep Snow
Traversing down and to the left was not easy for her since she couldn't hold the ax in her left hand. After some struggling, we came back to the boot path and then finally the spur road. At the main logging road we decided to trade bikes because the brake lever on my bike is easier to squeeze than hers. It took us another 25 minutes to ride 7 miles downhill back down to the car. Our round-trip time was 12.5 hours.

I drove quickly to the emergency room. The doctor had to cut the glove off because of major swelling and dried blood which was like glue. An x-ray revealed a fracture, but what had appeared to be exposed bone was merely soft-tissue poking through. Thank goodness it's not a compound-fracture, I thought to myself! We were both very relieved about that. They cleaned the wounds with an iodine soak, trimmed off the dead skin, and then wrapped it all up. She was given a script for Vicodin and Doxycycline, but she opted not to fill those since we already have doxy left over from our recent Nepal trip, and as for pain, she would rather just take ibuprofen. Throughout the whole ordeal I was amazed by Natasha's good attitude, despite her suffering. I wondered if I could have handled the situation as smoothly if it was me in her shoes. Probably not.

In hindsight I think of how many times I've been hit by rocks that were fist-sized or bigger. All I've ever gotten were bruises. Could we have done something differently?  Perhaps there would have been less rockfall danger if we'd stayed on the crest of the ridge.  This incident has made me think again about the dangers of mountaineering and I have had to take stock on what is most important to me. What would we have done if the rock was bigger, or the injury more serious? What if she hadn't been able to downclimb from the summit? These thoughts give me pause and I don't have all the answers. Are we going to stop climbing after this incident? Absolutely not. Will we always do what we can to minimize the risk? Absolutely.
It has been several months now since the injury took place. Natasha's finger is completely healed, albeit with scar tissue. And so we have traded places, for it is I who am currently injured and cannot climb. Just as soon as she was able again, I took a fall in the mountains and tore something inside my shoulder. It's strange how sometimes in life, you experience a situation from a different point of view, and relive something though another perspective.

I'm sorry about the accident, Adam. But, it sounds like both of you handled the situation like champions.

I used to take my wife, not a climber but she used to be a scrambler, on 3rd class routes. I always took a 40 foot section of 7 mm rope and a couple of 1" tubular slings for the parts I wasn't sure about. That short piece of rope came in handy only a couple times, but I always felt better having it with me.

Thanks Marc! It's funny you mention a short rope because I just picked up one of those last week, even though I won't be able to use it until this shoulder gets fixed.

But when I see the picture of seabadge waving her broken finger in the air, I think of John Travolta in Saturday Night Fever:

I thought his first movie was Pulp Fiction. Yikes!

Good work taking care of the situation... glad everything worked out well. Keeping cool and a positive attitude is likely more than half of what you need in an event like this. A good read too and lessons for everyone... thanks for the writeup!

My dad had a pretty similar injury about two weeks after you guys (12 July) while we were scrambling Class III in Montenegro. My dad dislodged a rock, about the size of a cooler, which crushed his right index finger. The rock caused a bunch of breaks, an open fracture, and unfortunately we didn't get to summit like you did. Congrats on the climb and dealing the the situation successfully, glad to see it healed well. Andrew

...but sorry to learn about Natasha's finger. When I saw your (excellent) little video clip I wondered what was meant by 'Injury on North Twin' - she climbs well throughout and the slight hesitation she shows at the bottom of the snow I took for tiredness. Brave Gal!

But now I'm sorry to hear you are out of action - hope you heal quickly.

As we me I find I always come back from the mountains limping or nursing some injury. Last year it was because I fell on my but chasing your friend the Peak Monster down Aiguille de Tour. This year I'm limping - but it is just because I am so damn old.