Winter Ambition: Whitehorse in a Day

After my Burgundy Spire Accident I had to give up mountaineering for a while. When I finally recovered enough to hike, a small run would be enough to re-injure my knee once more forcing me to be very careful with getting back in shape. With rare winter conditions it was painful to watch as many sunny days went by. I knew that if I wanted a shot at a spectacular climb I would have to wait until the perfect opportunity.

Michael and I contacted some buddies of mine, before long we had a solid team of climbers for Whitehorse Mountain. I have been wanting to climb this mountain for many years. Gimpilator has had too many canceled trips up this peak. We were all very eager to climb this mountain. With 7,000 feet of elevation gain during January and being out of shape, this would be a big under taking. Less than half way up the mountain I was trashed, the rest of the climb was dizzyingly exhausting, but the views were breath taking.


Video of our Climb by Gimpilator

Beginning and the Split Up

Redwic picked up Gimpilator, Michael Lewis, and I at my house the night before the climb. At the trailhead we set up our tents and eventually met up with Jacob Smith. With a few hours of rest we woke up at 2:30 a.m. for the climb. We hiked the one mile road to the trailhead. The lower trail to Lone Tree Pass wasn't bad at all. A bit steep in a few places with a small amount of brush, but for the most part is in good condition. Redwic was cruising up the trail, everyone was excited to be climbing at night with the faint light on the mountain. We did lose the trail a few times, but with a little bit of navigation we found it once more. As the trail disappeared into snow (so we thought), the brush increased. As the snow depth increased, Redwic unfortunately fell through a snow hole and re-injured his leg.

For a while Redwic toughed it out, but knew that it could compromise his own safety and slow down the team. Michael volunteered to go down with him which we did a hasty gear exchange with a pack swap. I really didn't want to, but my brother insisted. I now had to hustle up to Jacob and Gimpilator who were now way ahead of me. As we went up, the slopes opened up more. Sunrise was on it's way and it appeared that we picked the right access way to Lone Tree Pass which was a relief. Once I finally caught up to the team, I was already quite tired. 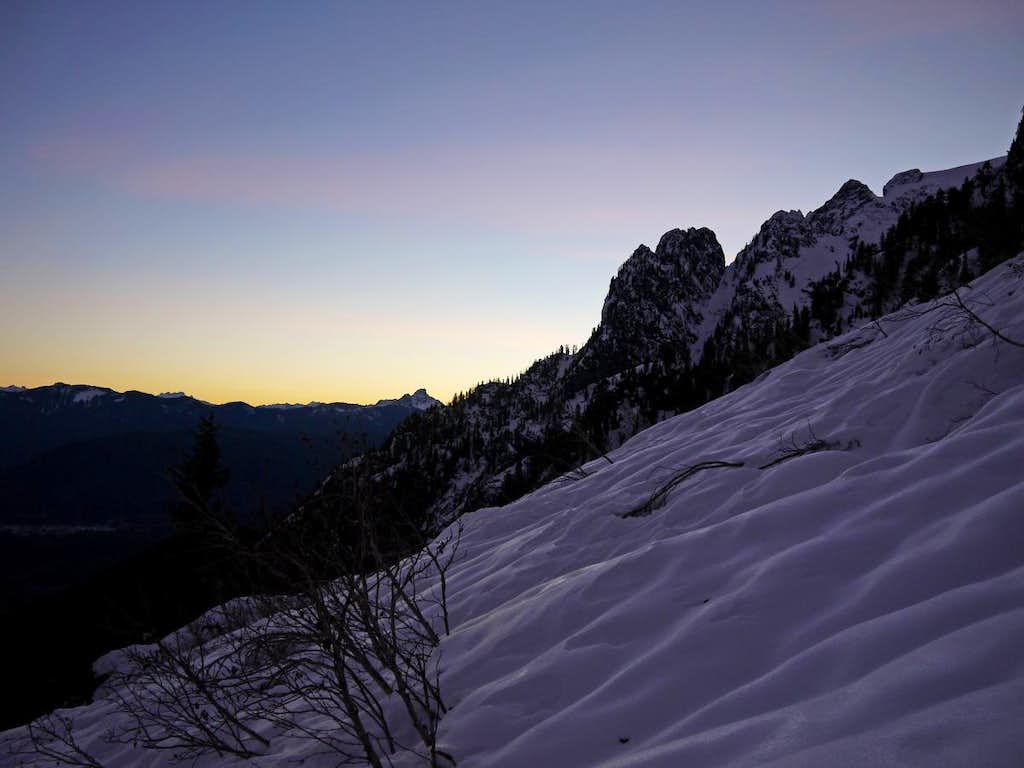 Morning View to the West

Getting Beat Down by the Approach

As my head ache started kicking in and the cramps started up, I knew I was in for a day of pain. My food supply was severely reduced due to the rapid gear exchange, so my re-fueling supply was less than ideal. After a bit more endurance we arrive at Lone Tree Pass where Gimpilator gave me some food so that I would have just enough to make it. The back of my foot felt like it was forming a blister with each step. The boots had never been climbed in before.

We hiked past Lone Tree to a great vantage point of the North Face of Whitehorse. After taking a few pictures I carefully placed my lens cap back on. I must have accidentally not clicked in one of the pieces as I put it on. Suddenly it pops off the camera and starts sliding down hill. If I really wanted to I could have made a quick step to stop it, but the slope was very exposed and was icy. I watched it fly away down the icy cliff. I was sad to see it go.


To meet up with the high pass gully we first needed to descend a bit and traverse the northwest slopes of Whitehorse. I managed okay due to the group speed decreasing on steeper slopes. After passing a big gully we accidentally stayed too high where it cliffed out ahead. To counter this we went through some steep woods and did some careful down climbing. Gimpilator was not pleased with this section. I decided to help kick in some steps for him (Jacob initially kicked in light steps). With a little bit of down climbing we arrived back on gentle slopes, unfortunately for me the team speed kicked back up.

At last we arrive in the gully that leads up to High Pass. By this point I was trashed. Everyone except for me put on their helmets, mine was back at the car because I assumed we wouldn't need them. Ice chunks started flowing down the gully on virtually every path way. Adam had a ice chunk go near his head. I was becoming intimidated by all the fast cruising ice. I would hear the rush of wind as it floated by making it a dangerous arena. The only thing that kept me from turning around was the fact that we found what seemed like the only pathway that avoided ice. On both sides of us I could see it flying by. Every now and then I would have to walk over to make sure a piece wouldn't hit me.

As we went up the gully I became increasingly dizzy and exhausted. The ice chunks were not helping me mentally. I was falling more and more behind. My chances of making the summit were not looking good. But I knew that if I pressed on over this next section that my chances of making it would increase dramatically. Just when I thought I was very tired as it was, fatigue hit me pretty hard. After being "fully recovered" I would take a few steps and my heart would be racing like crazy with heavy breathing. Take a few minute rest and then a few more steps. It was beginning to look hopeless at the rate I was going and the energy I had to put out.


I noticed that Gimpilator was going very slow as well which ironically gave me a shred of hope. It turns out he was tired too and encountered a dicey ice section. Looking to my right I saw a frozen forest which was quite a neat sight. At the icy section I decided to take an alternative pathway that was much faster to travel through. Sometimes you have to pick obscure routes over the direct ones when climbing. At the High Pass I could finally rest and recover. The threat of ice bombs coming down on me was finally over. Jacob was already way ahead, Gimpilator proceeded while I buried all of our snowshoes in the icy snow which took a bit of time due to how powdery and icy it had become.

Crossing the Glacier and Final Pitch

All alone on the blue frontier of the icy So-Bahli-Ahli Glacier, only a little more ways to go to get to the summit. While it was still tough for me, being solo enabled me to go at my own pace. The icy landscape all around was incredible.


Once Gimpilator reached the final 60 degree snow slope, Jacob threw down the rope for a belay. By this point I caught up and took a nice rest. Once Gimpilator was up, it was my turn for the exciting final push. At first I thought about soloing it like Jacob, but decided with how tired I was and how icy the landscape was that being roped up would be a nice luxury. 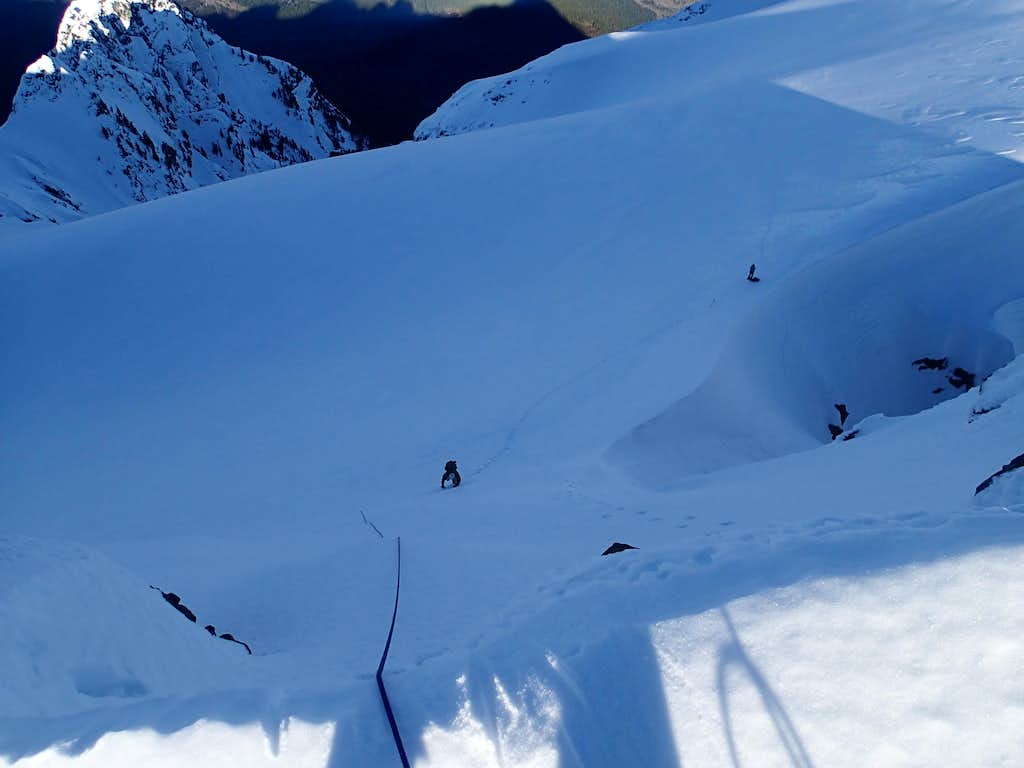 After climbing the slope, with a few more steps I was on the summit! Gimpilator and I could hardly believe it. The views were spectacular and the weather was very friendly. After a short while on the summit we started the rappels down to the So-Bahli-Ahli Glacier.

Jacob took out the anchors and down climbed the steep snow slope to the glacier. Eventually the group passed me, I blame my photo obsession a little bit for that. ;-) At High Pass Gimpilator told me to use his helmet. I knew I couldn't convince him otherwise, so I accepted the offer with a shred of guilt. Lucky for us there was very little falling ice on the way down. Even going down was tiring for me, I could not go as fast as everyone else.

Once we were down the gully we made haste and traversed over to Lone Tree Pass which went alright. The up hill part was tiring. As we get near the pass, the sun begins to set.

Beyond the pass everything was all down hill. This did not mean everything was holly and jolly yet. I once again fell behind, but this time I actually lost the group. The slopes all around became very icy and I had to make sure I didn't slip with each step. Being tired with crampons on is not a friendly combination, especially when your very dehydrated, your out of shape, it's almost dark, your out of food, your team is fast, and you don't know where they are. I tried going faster but then would either slip or almost take a nasty fall. My injured knee was hurting once more. On the bright side the sunset had some nice colors.


Finally I could hear Gimpilator yelling in the distance which was comforting. I yelled back, eventually we met up again. Unfortunately we list Jacob somewhere in the process. To save time we decided to break away from the path we came up and we took a side gully. Eventually we managed to find Jacob before it got too dark. After descending a ways more we began a hunt for the trail. Using some tracks, a GPS, and some trouble shooting, we found the trail. On the trail I was making great time considering that there was no ice. There were times I had to wait for the team. We arrived at the trailhead at about 7:50 p.m. I was so excited to make it down. Redwic had driven Michael home and went for a mini hike that day and waited to pick us up. I was glad to see he was in good spirits. While this is a cool mountain, it trashed me pretty good. Not bad for a physical wreck. ;-)

Gimpilator wrote a trip report on NWHikers about this climb.

Way to get after it

I know it can be rough recovering from injury and waiting for good conditions. Glad you found the balance.

Way to push through it!

It was a quite a climb, I had no idea you were feeling so shitty! I myself was tired as hell, while i waited for you guys below the summit block i found a sunny spot out of the wind and actually dozed off for a couple minutes (I have really grown to hate alpine starts, give me a good rock climb any day).
Still disappointed about not getting the east face this season...

I got hammered by this climb too, good job!

Impressive! And memories forever! I would love to tag along - and quit early!