Something Wet comes this Way

When it rains, it pours! This is by far the wettest trip I've ever had in my mountaineering experience. Although the weather started out good, we could not escape the bad weather in time and ended up in some of the worst conditions for getting into the mountains. From soaking wet to going into snowy conditions, this trip was far from ideal. By the end I was covered head to toe in mud.

It had been a while since I had my fill of adventure. With the constancy of bad weather I was willing to take any opportunity possible to get a great trip in. The weather forecast predicted bad weather coming in but it appeared we had just enough time to get into the mountains before the rain arrived. Deeper into the mountains the forecast called for snow which is much friendlier. Unfortunately we did not make it in time, the trip fell apart, and we got super soaked before arriving to the snow. The wet snow made it even colder making the risk of hypothermia a very serious possibility.

My Food Supply for the Trip (Conquering the Impossible not Included)

After stashing up as much food as possible and packing my best gear we eagerly went out the door on our bikes. On our first bike ride to Everett one of the buses was having major issues which we had to stop unexpectedly. The next bus took a while to get to us. I was quite nervous at this point because we had a limited window to catch the bus to Darrington which only operates a few times a day. Fortunately it worked out and we barely caught our connecting bus and after 2 more buses were on our way to Darrington. We arrived around 4:15 p.m. a little after dark.

We had roughly 23 miles of biking along the Mountain Loop Highway. The weather was perfectly clear and the fall colors were still in fashion. A little while after dark the moon rose above the mountains giving us light though the trees at times. Many miles in my bike was having issues where the wheel was wobbling and hitting the brake creating friction. Michael helped me adjust the tire to a more usable fashion. Unfortunately this meant disabling the brakes. Hours later we arrive at the North Fork Sauk River road. There was some muddy sections forcing us to have to walk our bikes at times. I admit this was a bit tiring, more difficult than your average hike. When we arrived at the trailhead Michael was feeling too tired to proceed further. I was a bit concerned of the weather coming in but didn't have much of a choice so we camped at the trailhead. 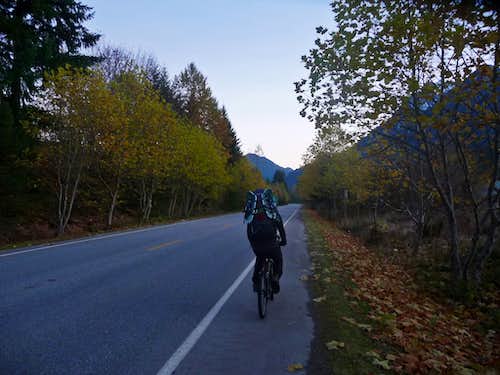 Biking Into the Mountains

In the middle of the night the rain started pouring on our tent. It was no surprise. In the morning it was still raining, quite cold too. After having breakfast we proceeded on and carried our overnight gear along the trail toward White Pass. There were big puddles on the trail, photography was difficult because there was so much condensation in the air. My mountaineering boots became quite soaked as well as our clothes we were wearing. Monotonous miles dragged on though forest hiking in the pouring down rain. Fortunately the hike kept us some what warm. Along the way there were some fallen over trees we had to climb over, one section in particular involved a bit of scrambling due to the trees in the trail. Miles further down the trail it started to snow which I was pleased. But it wasn't as pretty as it looked. 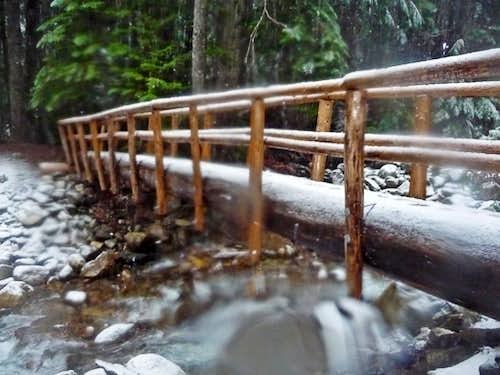 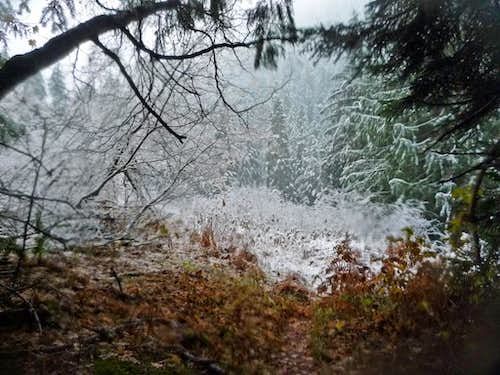 From Dry to Snowy 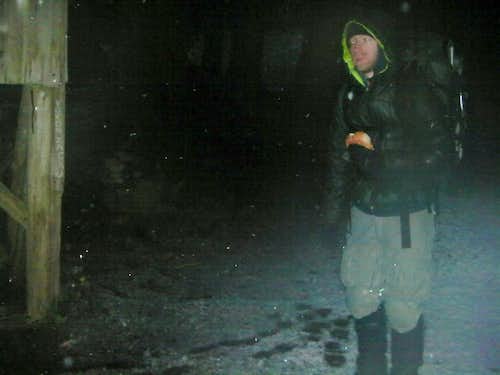 Michael Soaking Wet at the Mackinaw Shelter
When we got to the Mackinaw Shelter we were both soaking wet and very cold. Michael was shivering as we had lunch/dinner. My food was getting wet and it became difficult to make simple things like sandwiches. Looking ahead it seemed quite dangerous to proceed in these conditions of soaking wet and freezing weather above. Finally we called it quits and turned around. The cold sensation got to me a little bit as we hiked back in the dark. At the trailhead we camped at the same location as the previous night. During the night Michael was shivering cold which is when I told him to hand me his clothes and I could dry it out. I was thankful to have brought my -20 degree bag, I would have been in trouble had I brought my summer bag. Michael however still had a very cold night.

Day 3: A very Wet Ride Back

Early in the morning the snow had arrived at our camp. Had we been here a day or two later it would have been better considering that it was not raining. We packed up camp and hopped on our bikes for the ride home. There were a lot of bumps in the road forcing me to stop a lot. It didn't help that my brakes didn't work... at all! So I used my boots as brakes. They leaked, so I figured no harm done. As I was using the boots as brakes a piece of it chipped off and I found myself having difficulty stopping.


As we got lower the rain started up again. Once we were on the Mountain Loop Highway we could make better time. Going down hill wasn't always the most fun. Not only did I have to use my feet as brakes but water and mud would splash in my eyes. From head to toe I was covered in mud. I laughed to myself thinking how most city folks would think this was nuts. Well maybe we were a little crazy. But you gotta be if you want to be a mountaineer. Once we arrived on paved road the travel was so much nicer. Once we arrived in Darrington I enjoyed some chocolate milk and waited many hours for the 4 p.m. bus home. Fortunately there was a library. After only three buses home we could finally enjoy ourselves back at home.

Although this was a interesting experience, it was cold, wet, and far from comfortable. It makes one really appreciate the luxuries of being dry, warm, and well fed. I certainly learned my lesson about rainy weather.

I love to run in the rain, it's a thrilling experience that many don't get to enjoy. Plus I'd miss out on all the cascade bushwhack jungle fests. :-D Go to where wild things are is my theme of adventure.

This is a bit nuts, even from the perspective of other mountaineers. :-)
But I acknowledge your perseverance is far greater than mine and I commend you for it.
btw, I changed "breaks" to "brakes" for you.

Thanks for fixing that spelling issue. I don't do as many wet hikes these days, but I'm my motivation will return for that.