Going for the Gold

Josh Lewis
Add photos See all photos
After having a few mountaineering attempts that week I decided it was time to stay low in the mountains, with a clear day I figured Gold Mountain would be a good choice. Fortunately I was right on this call, although sadly we did not make the summit. I took the bus to Arlington which Chris then drove us to Darrington which is right next to Gold Mountain. The road started off with semi deep snow (certainly too much for my mom's car). As we got higher up on the road the snow got deeper which at times we started loosing speed. Chris was persistent with wanting to get as far up the road as possible. Pretty soon there was a tree in the road which I figured would be the end of the line. Nope, sure enough Chris pulls out his chain saw and has me depressurize the tires so that going through the snow is better. 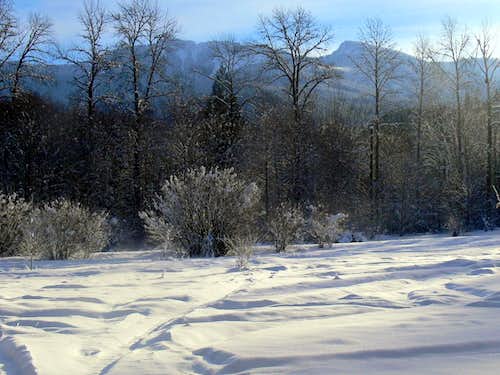 Prairie Mountain from the Road 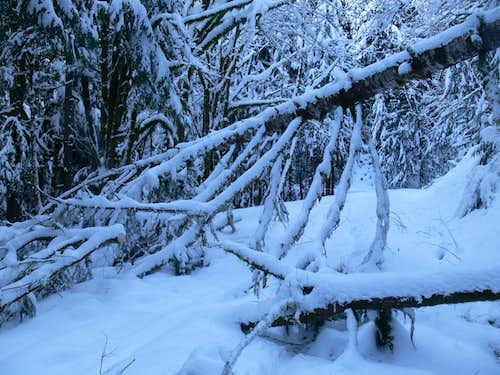 Prairie Mountain Panorama
After this we came across more trees which Chris sawed away, on the last fallen over tree the chain saw nearly ran out of gas but we got lucky and got though. Later on we got caught in some deep snow which Chris once again was persistent to drive up, so he would back up and ram in 6 or so inches, go back and ram the snow again. The only other person I could think of with that much persistence with driving up is my dad. Eventually we managed to make it though. I can guarantee that most people's car's would not have made it. Eventually when snow got to around 2.5-3 feet deep we finally had to start the walking. 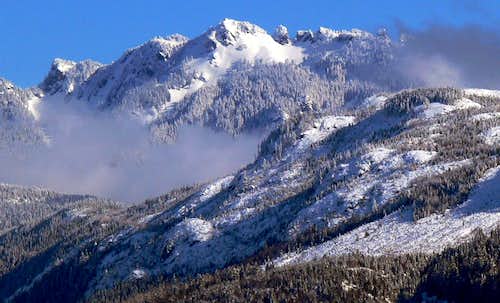 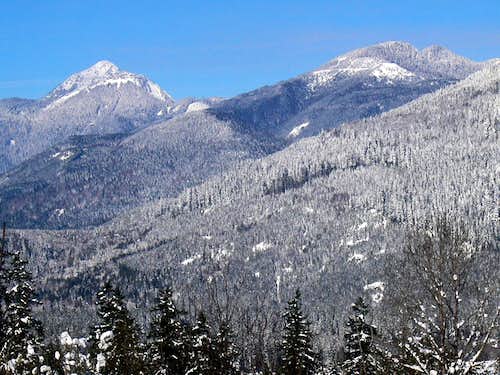 Looking Towards Darrington
After all the previous trips breaking trail was tiresome for even a flat road. All the fresh snow made all the difference in the world with difficulty. After a ways we decided to skip a few switch backs which had a few tough spots because we had to take off our snowshoes. Soon it was back to the road again. I'll admit after a while of trail breaking part of me wanted to not push on so hard, but I knew if I didn't there would be no way we would summit. When ever Chris would lead walking behind his steps was like resting, sometimes what I would do is have him break trail for a few minutes and then I would be able to for a while. 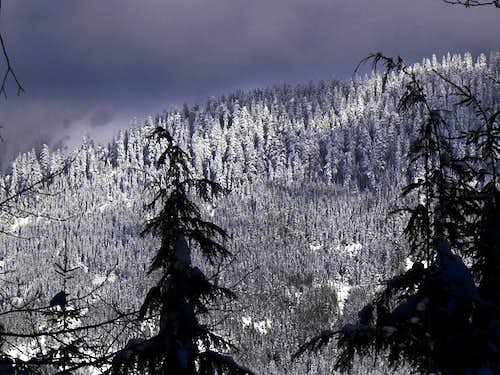 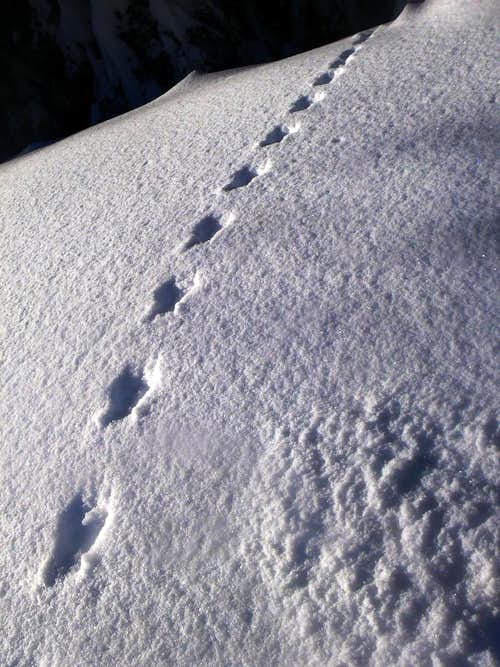 Animal Tracks
The atmosphere of the place never got above freezing and we rarely saw the sun. For most of the day we had little views due to tree cover and such. But after passing around a corner we were finally rewarded, which made the whole things certainly worth while. 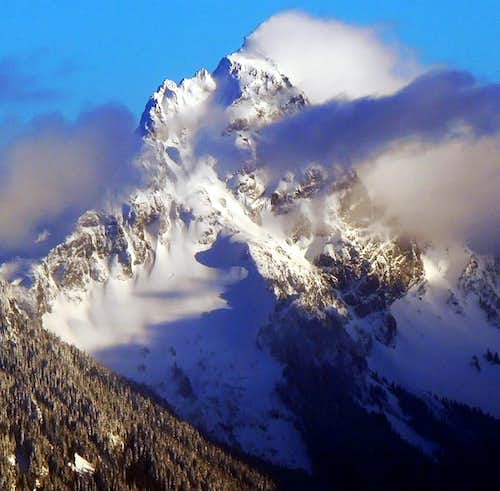 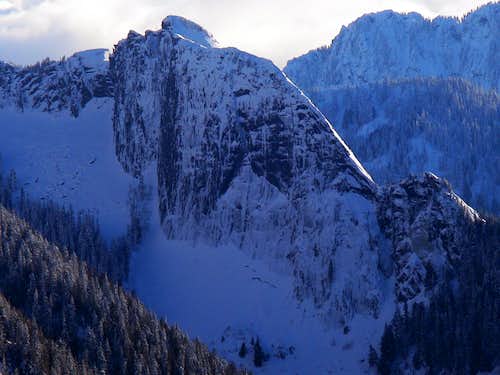 A Big Cliff in the Mountain Loop Highway 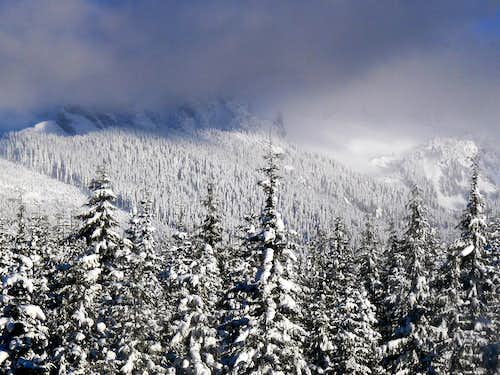 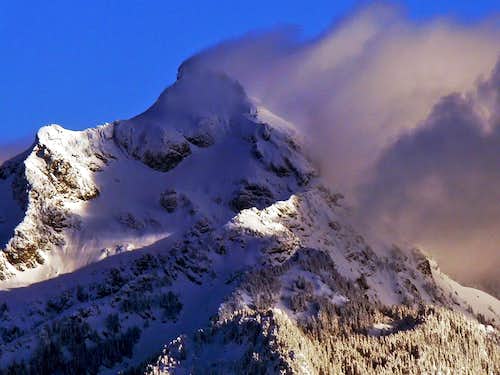 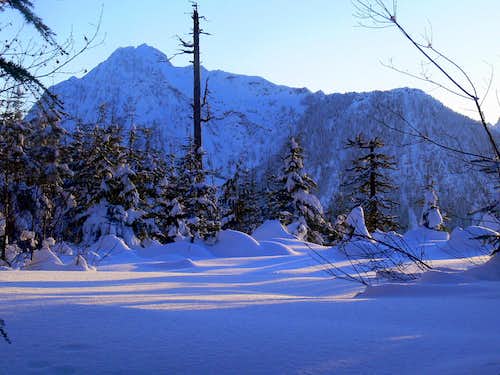 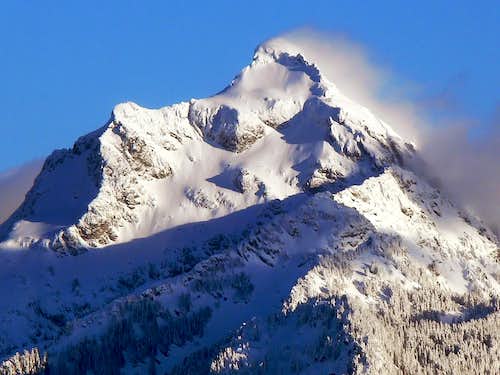 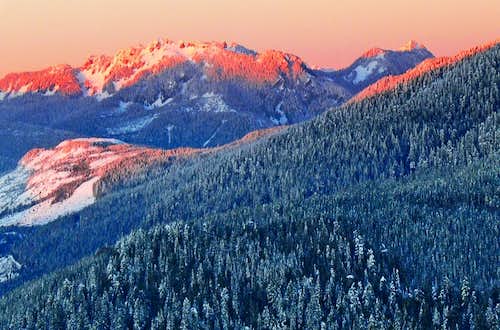 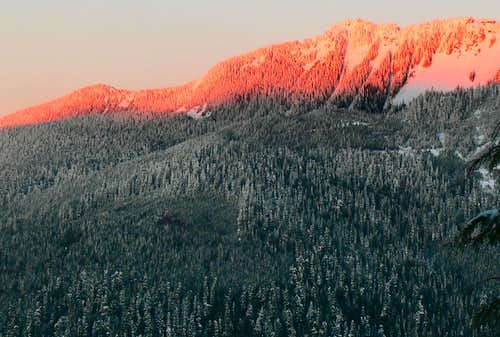 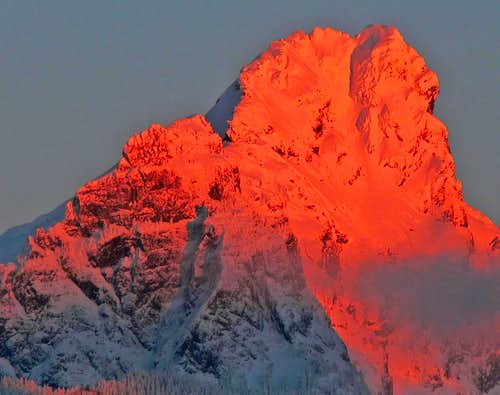 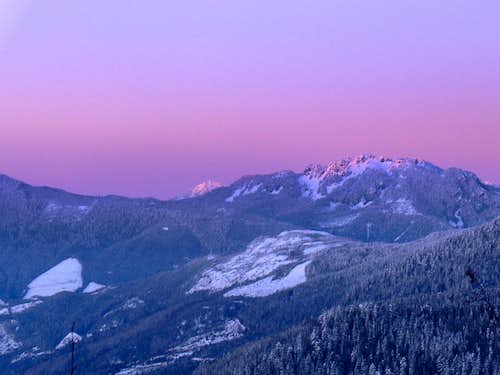 After taking tons of photos it was 4:24 p.m. which we had to get down. We came very close to the height of the summit. On the way down we had some nice conversations, the sunset was quite nice which White Chuck Mountain which had been buried by clouds most of the day made a good appearance. Travel back down to the car was much easier. Chris drove me to Smokey Point which was out of his way, but was much appreciated. From here I took a few buses down to Lynnwood. It was another great and beautiful day to be out in the mountains.

(Why am I not surprised?)

Thanks Redwic! I suppose it's hard to surprise you. ;-)

Thanks Greg! Too bad avalanche danger was so high or else I would have been even further up in the mountains during that day. Some day Greg you need to experience stuff like this. I know you go out in the mountains a lot, even see stuff like the sun rising on Mount Rainier but winter during sunset has some really cool moments that I believe everyone should experience at least once!

The pictures are incredible, especially the one of Sloan. I'm jealous!

We live in quite a beautiful state, it was sad that my camera kept running out of power which limited me in what I was able to photograph in this view. I would then have to immediately take the battery out and warm it up to get another 60 seconds of photography in. And then repeat that until we eventually had to go back. Thanks Tangeman for your comment, if you ever want to join me on a trip your invited to come. I'd also be willing to show you some camera stuff if you want.

At first I thought this was a picture of a peak in the Korakoram. How deceptive can you be? Anyway it's a great picture. Thanks.

Well you could blame it on the people who choose the featured trip reports, they were the one's that picked one of my favorite photos of the trip. But personally I liked there choice for what photo to use. Glad you liked it Nyle. Cheers Josh Lewis.

I don't completely understand WHY your friend was carrying a
chainsaw.

Was he wearing a hockey mask, or is he a highly-skilled woodsman
and competent individual completely willing to meet any challenging task that comes his way ???

He brought it for the scenarios that we encountered which was fallen over trees in the road. He only carried it when cutting trees to be able to proceed.

Nice for you to get featured; you are very deserving.
Great TR

Beatiful Pics! Next vaca for us!