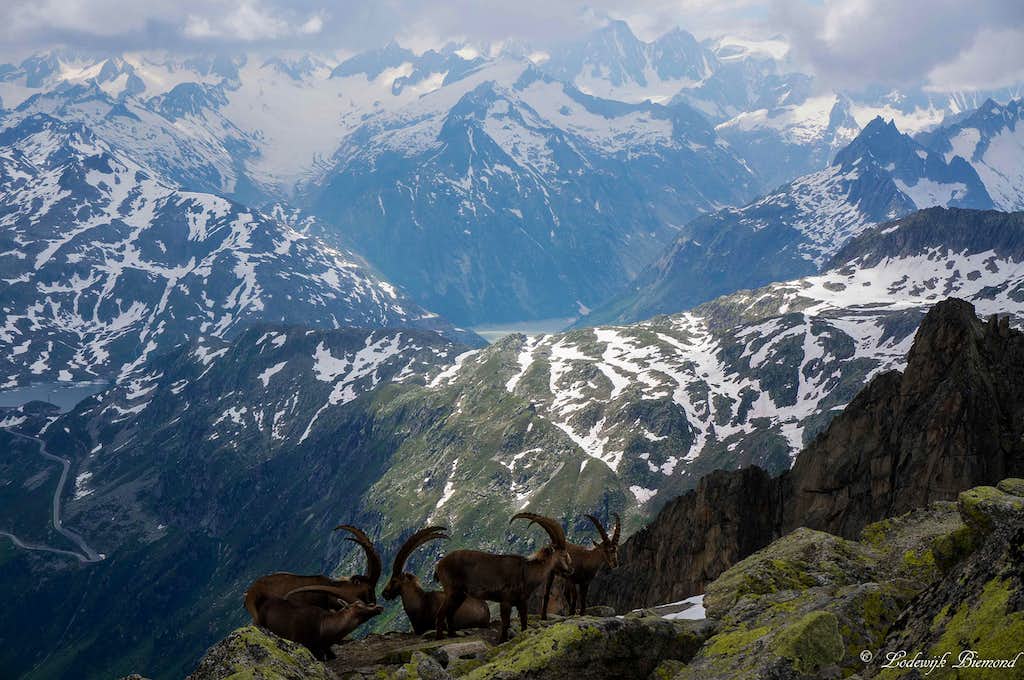 Ibexes in front of the Berner Oberland as seen from Klein Furkahorn
The Klein Furkahorn is situated directly above the Furka Pass (passroad). The mountain is easy accessible and offers visitors a large and comprehensive view over the Bernese as well the Wallis-Pennine and Lepontine Alps. The summit view will show you the Monte Rosa and Michabel groups, as well as  Matterhorn, Weisshorn, Finsteraarhorn, Lauteraarhorn, Shreckhorn, Galenstock & the Rhone Glacer, Basodino, Blinnenhorn and even the Bernina Group far away in the east.
Unlike the famous peaks surrounding Klein Furkahorn, like Gross Furkahorn, Gross Bielenhorn and Galenstock, which offer spectacular alpine climbing, the Klein Furkahorn can be considered as a good option for a short and easy hike to a wonderful panoramic point (about 1.5-2 hours from the Furkapass to the top). Besides the easier hiking tails to the summit of Klein Furkahorn the south-west ridge offers  nice climbing routes varying between II to IV on the UIAA scale.
The normal route to the summit takes about 3,5 hours as a round tour (up and down) and is graded T3+. The route is purely hiking, although early in the season there might be snow present on the mountain. The route is quite popular due to the vicinity of the Furka Pass making it possible to climb a 3000m+ mountain in just half a day. Besides that, the views from the summit over the Rhône glacier and towards the impressive Galenstock are simply great.

Klein Furkahorn Route Map
The normal route to the summit of Klein Furkahorn is graded T3+ and therefore a moderately difficult alpine hike. The route starts opposite to the Hotel Furkablick (see the P on the map at left), which is located a couple of hundred meters to the east of the actual Furkapass (highest point). Follow the marked trail  (opposite side of the road from Hotel Furkablick). There are two options to take here: 1) (corresponds with the number on the map at left) follow the trail adjacent to the passroad towards the west. The trail goes to the actual Furkapass and from there up the mountain in a northern direction. A steep trail zigzags its way up to the Furkastock at 2665 meters. At the Furkastock is a top station of a small cableway. Follow the trail in a northern direction up to point 2874m. At thispoint the other route joins again.
To take this other route: 2) (corresponds with the number on the map at left) Also start opposite from the Hotel Furkablick. Follow the trail towards the northwest. In a short while you have passed the houses and the trail starts gaining in elevation. Follow the marked trail up along the SE-flank of Klein Furkahorn, all the way up to point 2874m. As previously mentioned, both routes from the Furkapass join at this point. A nice variant to the climb is to take one of the routes up and the other one down to create a nice round tour.
At point 2874. keep following the trail in a northwestern direction. The trail goes up the SE-flank of Klein Furkahorn and is at all times very well marked by blue-white-blue stripes (paint). Along the flank the route increases in steepness a bit before arriving at the summit of Klein Furkahorn, marked by a small summit cross.
Also see the map at left for the route. 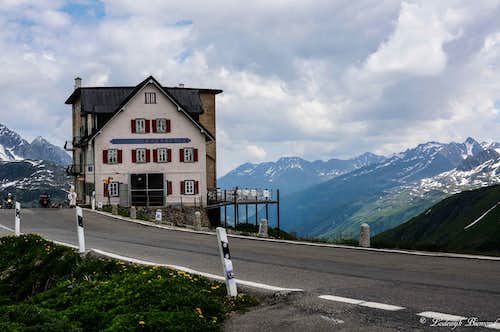 Furkapass
The starting point for Climbing Klein Furkahorn is the Furkapass, located on the main road between Andermatt and Oberwald. There is bus service over the pass, but the schedule is inconvenient for a day climb. Thus if one does not have an automobile, an over night stay at or near the pass would probably be required.
See this Google Map Link for the location of the passroad and thus starting point for a climb. Also via this link it is possible to plan your route to the Furkapass. 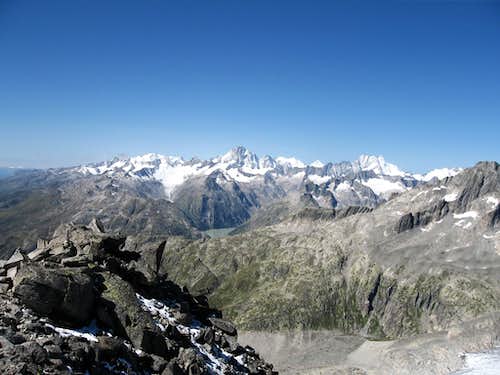 Bernese Alps  from Klein Furkahorn
Klein Furkahorn can be climbed best during the summer months and in Fall (June / October) when there is no snow present on the mountain.

Red Tape / What to take 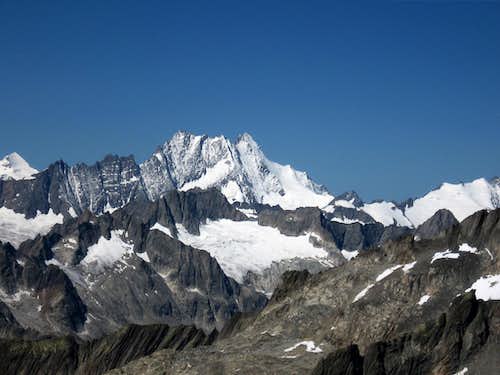 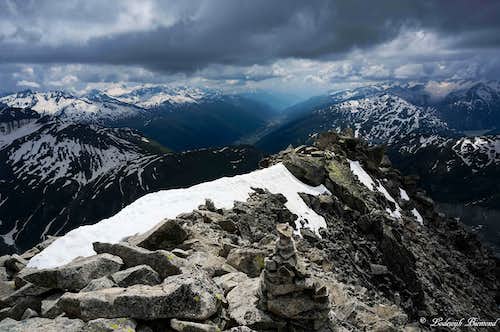 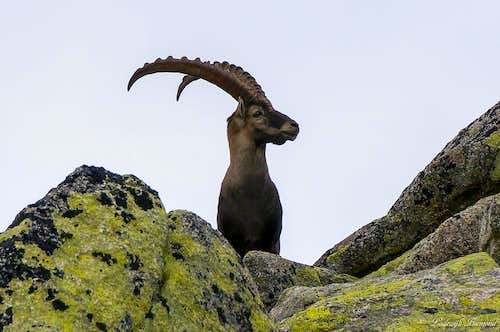