Lee Vining Peak is the high point 2 miles southeast of Mount Warren on the big massif that overlooks Mono Basin between Lee Vining Canyon and Lundy Canyon in the Eastern Sierra. This simple walk up peak has an excellent view of Mono Lake 4 miles to the east as well as extensive views down range as far as the peaks around Mammoth Lakes.
The west slope is a moderate dayhike from the Warren Fork off of Highway 120 not far beyond Tioga Pass outside of Yosemite National Park. The east slope is a shorter scramble from the Boy Scout Camp if your vehicle can handle the unimproved road up from Lee Vining Canyon.
The west slope early approach is class 2 and the slope itself is class 1. The east slope is class 2. The north peak is the summit.
The climb can be combined with "Canyon Peak" which is less than a mile to the southwest on the approach.

West slope: From the junction with Hwy. 395 take Hwy. 120 west up to a hairpin turn at 7.5 miles and park on the right at the trailhead leading into Warren Canyon at 9,000'.
From Tioga Pass go northeast 6.7 miles on Hwy. 120 as it winds down to the same trailhead.
From the trailhead scramble up the southeast slope of Canyon Peak immediately to the right staying to the right of the drainage. Unfortunately there is apparently no way to avoid bushwacking through a few hundred verticle feet of chapparral on the lower part of the slope unless you go up on the left side of the drainage. Continue northeast up the drainage to easy open terrain leading to Lee Vining Peak which is obvious ahead.
This hike is 4 miles round trip and 2,700' gain.

East slope: From the Lee Vining Ranger Station, (1.2 miles west on Hwy. 120 from the junction with Hwy. 395) at the lower end of Lee Vining Canyon there is a paved road to the north that branches at .5 miles (go left) into unpaved and goes 1 mile back west along the north side of the canyon before turning right and climbing approximately 3.5 more miles to an elevation of 9,700' at the Log Cabin Wilderness Boy Scout Camp, 1.5 miles east of the east slope (class 2) of Lee Vining Peak.
This is approximately 3 miles round trip and 2,000' gain.
It is best to use a 4WD or high clearance on this road. 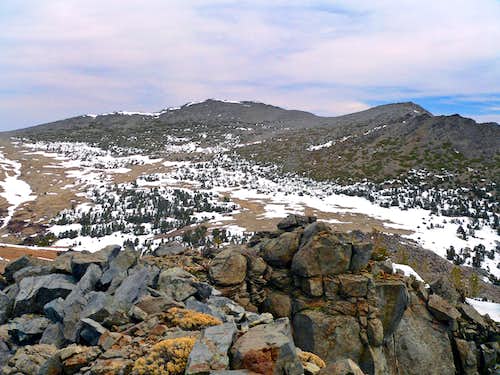 This is a dayhike in the Inyo National Forest requiring no permits.

Campgrounds in the area.

There is also the Big Bend, Aspen and several other campgrounds in Lee Vining Canyon starting at 2 miles west of the junction of Hwy. 395 on Hwy. 120 off to the left at 7,200'.

For the Lee Vining weather and 5 day forecast click here.

Lee Vining Peak (11,690'): Mono Craters 15'
"Leroy Vining and a few chosen companions, with one of Moore's scouts as guide, went over the Sierras to the place where the gold had been found [in 1852], and established themselves on what has been known as Vining's Gulch or Creek." (Bunnell, Discovery, 1880, 278.) In the early 1860's Vining built a sawmill on the creek named for him, and sold lumber in Aurora, Nevada.
Sometime later Vining came to a peculiar end. "At that time the crowd of miners and gamblers used to congregate at the Exchange Saloon [in Aurora], where frequent shooting-scrapes would occur. Whenever trouble started everyone would get out of the room. On one of these occasions a gun went off in the crowd and Lee Vining went out the door...and started up the street toward the Odd Fellows Hall. Shortly after someone found him lying on the walk dead, and upon examination it was found that the pistol had gone off in his pocket, shooting him in the groin, from which he had bled to death." (Letter, C. F. Quimby to Maule, Sept. 1927, in SCB 13, no. 1, Feb. 1928: 84.)
-Place Names of the Sierra Nevada by Peter Browning