Really just an aspect of Tioga Peak, the Sphinx is a roadside crag that packs quite a wallop. With four distinct summits, the first and last of which are the hardest to reach, this peak offers a nice, fun challenge if one has a few hours to spare while visiting the Tioga Pass and Tuolumne Meadows area of Yosemite.
The Mountain Project page for this peak lists trad routes on the faces ranging from 5.9 to 5.10b, but there is a scrambling route (east ridge) that goes at 5.7 (more details in the route section). This page will focus on the peak as a scrambling objective, as that is my experience with the peak and seems to appeal more to most SPers.
From the ridges and summits there are excellent views of the high country east of Tioga Pass, and the sustained scrambling makes the outing well worth it.
The summit register goes back to 1938.

The Sphinx and Tioga Peak from the Approach to Ellery Ridges 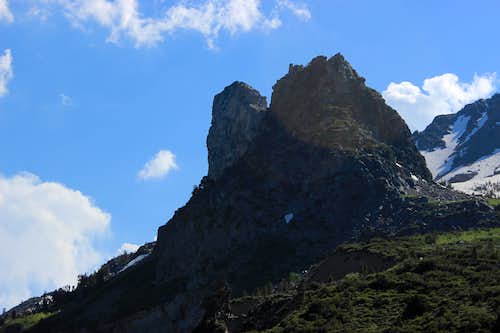 The Sphinx from Lee Vining Canyon

The standard scrambling route on this peak is the east ridge, though there apparently are at least a couple other ways to scramble to the summit. From just past (uphill) a prominent curve and the 9000' elevation marker, cross the road (one of three cruxes en route) and scamper up some boulders to attain the ridge. 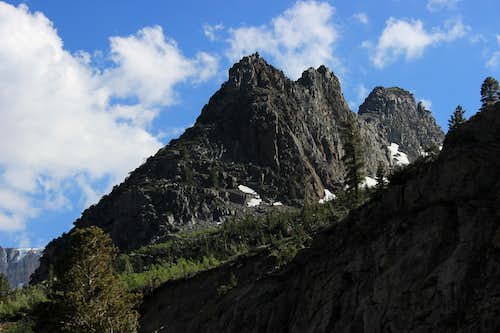 East Ridge
Follow the ridge toward the first summit. The rock alternates between great and bad. Multiple ways up exist. Supposedly it is 5.7 somewhere, and I did get on Class 5 rock, but I don't think anything I got on was 5.7. My companions that day took a different line and did not think it was close to 5.7, either.
This first summit has its own register and a nicely exposed summit block with room for one person to stand atop it.
It is Class 3 to the next summit, which is more a bump.
The next summit is crowned by what appears to be some stacked rocks. It also looks difficult from the second summit, but the traverse is much easier than it looks (Class 3), and getting up from the ridge is Class 3/4. 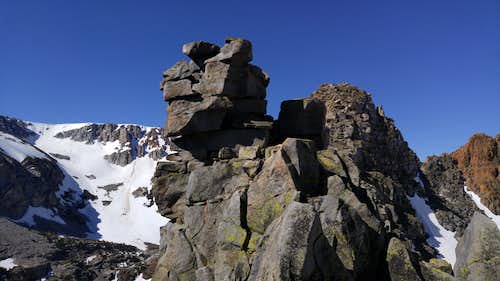 Third Summit
Now it's on to the fourth summit, the highpoint. At first it's pretty easy going, but if you have been studying the route from afar and noticing one spot that does look hard, you're right. This crux-- I explored options to the left only to find a cliff and options to the right only to find what looked like moderate Class 5 with serious exposure-- is on solid rock, but I don't recall it looking protectable. It's rated 5.7, but this is the Sierra, and I think it would easily be 5.8 in many other places, and I don't mean areas known for soft grades. Basically, it was two bouldering moves to easier ground. 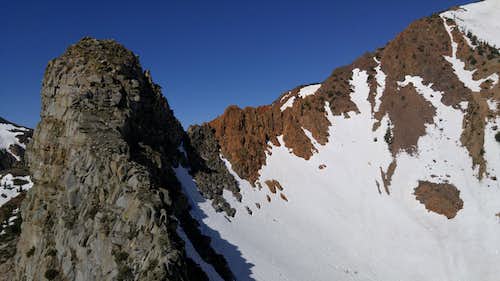 Sphinx Summit
Downclimbing, I did notice a wedged sling that, if in good shape, could be used to rappel.
To descend, return the way you came. Another option is exiting the ridge (on the road side) between the 2nd and 3rd summits. Other options may exist. 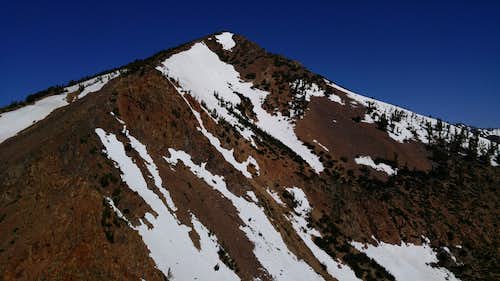 Tioga Peak Seen from the Sphinx 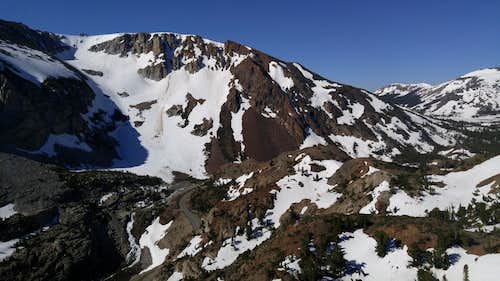 Dana Plateau and Ellery Bowl from the Sphinx

None beyond posted regulations.

Summer and early fall. The road up here does not open until late June some years.

There are campgrounds right off or shortly off 120; the closest is probably Ellery Lake. There are no reservations, and sites fill early. Dispersed camping off 120 is not allowed.