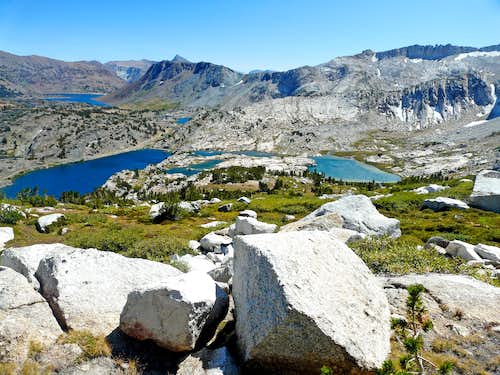 Steelhead and Cascade Lake from the north
The area surrounding the Sierra crest along the northeast border of Yosemite National Park is a classic alpine setting of lakes, streams, mossy tundra and snowfields sustained by the rugged granite peaks and ridges that run north of Tioga Pass.
Between North Peak and Excelsior Mountain is a 1.5 mile northwest offshoot of the main crest named the Shepherd Crest.
The main east peak is a prominent sight beyond the north end of Saddlebag Lake, a popular jumping off point for hikers and backpackers on the east side. It is easily approachable from Saddlebag Lake and has at least one excellent climbing route on the northwest face.
The Shepherd Crest sits at the head of 4 major drainages: Virginia Canyon, Lundy Canyon, Lee Vining Canyon and McCabe Creek. It has outstanding views in all directions, especially to the south. 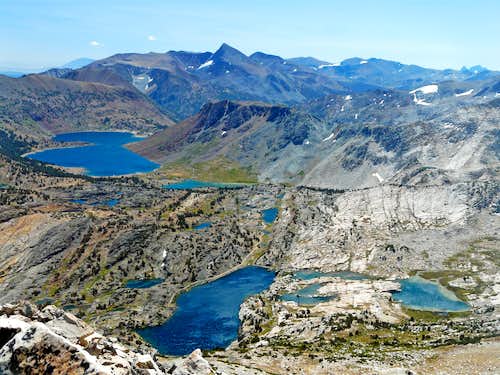 South from the Shepherd Crest summit: Saddlebag Lake, upper left, Steelhead and Cascade Lakes, below, Mt. Dana, mid horizon
East side route: From Hwy. 395 take Hwy. 120 10 miles west up to the Saddlebag Lake road. From Tioga Pass go north on Hwy. 120 2 miles to the Saddlebag Lake road. Go north 2.3 miles on the Saddlbag Lake road (partly paved, passable to all cars) to the south end of the lake at 10,000'.
Take the trail on the left side of the lake 1.5 miles to the north end. From there take the trail 1.2 miles to Steelhead Lake and continue north around the left side of the lake and up easy benches .8 miles to "Secret Lake" ( unnamed on topo). Scramble up to McCabe Pass (class 2-3, easier to the left). From the pass go northeast up the class 2 southwest ridge to the summit.

West side route: From the Pacific Crest Trail out of Virginia Canyon at 9,130', take the McCabe Creek trail east for 1.4 miles to where it forks to the south. Leave the trail here and hike east southeast following McCabe Creek 2.6 miles to McCabe Pass (class 2). 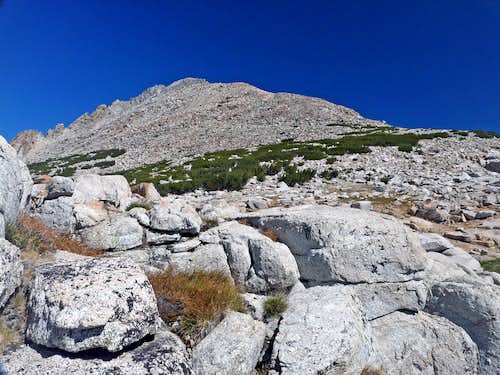 Southwest ridge from McCabe Pass
Permits are required if you are approaching from the west out of Virginia Canyon in Yosemite National Park which is obviously backpacking country. Call 209-372-0200.
for permit info.
The east side route (Inyo National Forest) can easily be done in a day and no permits are required.
There is a boat taxi available every 20 or 30 minutes that runs from the south to the north end of Saddlebag Lake and back and costs 7 bucks one way or 11 roundtrip from about 7:30 AM to 5 PM.
This is a fun little ride with great views and saves 1.5 miles of hiking along the lake. 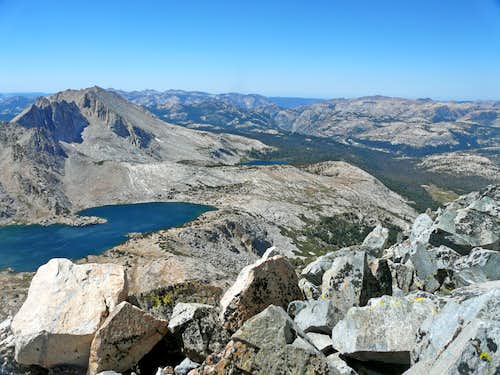 Northwest over Upper McCabe Lake with Sheep Peak from Shepherd Crest summit
Inyo National Forest campgrounds in the area:
1-Saddlebag Lake, at the south end of the lake above the fishing store and parking at 10,100'
2-Sawmill campground, 1.8 miles north on the left of the Saddlebag Lake road at 9,750'
3-The northwest junction of Hwy. 120 and the Saddlebag Lake road at 9,600'
4-Ellery Lake, 2.3 miles north of Tioga Pass on 120 at 9,500'
5-Tioga Lake, 1.5 miles north of the pass at 9,600'
There are also Big Bend, Aspen and several other campgrounds in Lee Vining Canyon starting at 2 miles in from 395 off of Hwy. 120 to the left at 7,200'. 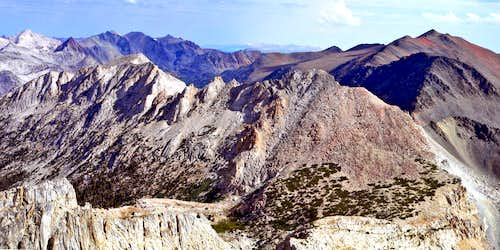