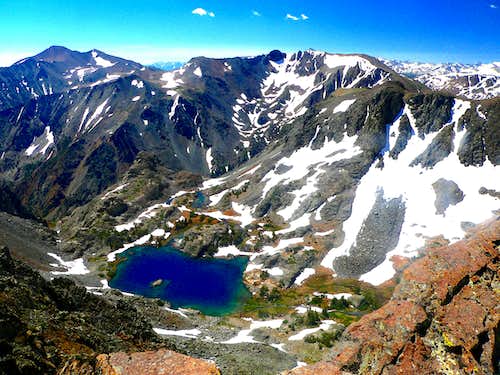 Tioga Crest and Dore Cliff are located at the northeast end of the Tioga Crest. This is a ridge that starts above Gardisky Lake and runs approximately 2 miles to the north on the east side of Saddlebag Lake, 3 miles east of the main Sierra crest. The Tioga Crest is primarily composed of ancient metamorphic rock like nearby Mt. Warren and Tioga Peak. The southwest slope leading to Dore Cliff and Tioga Crest is a simple class 1 day hike from Saddlebag Lake. The views from the top take in a good chunk of the Yosemite and Hoover Wilderness high Sierra especially Mt. Conness and North Peak. Put quite simply, this is a spectacularly beautiful area; and a very accessible peak.

Tioga Crest itself is about a quarter mile west of Dore Cliff.  Tioga Crest is the actual high point on the ridge. 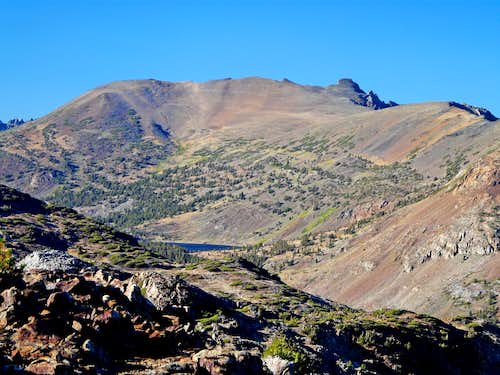 Tioga Crest and Dore Cliff from Gaylor Peak. Route goes right, diagonally up through the trees from Saddlebag Lake to the dark point on the right

Take the trail around the right side of the lake approximately 1.7 miles and hike 1 mile northeast (class 1) up through a loosely forested section to Dore Cliff, a small prominence on the northeast corner of the Tioga Crest.

FROM GARDISKY LAKE: Take the Saddelbag Lake Road 1.2 miles to the Gardisky Lake trailhead (there is parking on the left side of the road). Hike .7 miles up to Gardisky Lake. Take the south slope of the Tioga Crest (on the left) to the top and follow the crest approximately 2 miles to Dore Cliff.  This is an ideal way to combine the hike with Tioga Peak.

NOTE: If you approach the Tioga Crest from Saddlebag Lake before the recommended starting point at 1.7 miles you're likely to encounter scree fields on steeper terrain.

This is Inyo National Forest and no permits are required for day hiking.  Tioga Pass is usually closed during the winter months from the eastern side.  It usually opens between mid-May and mid-June; depending on the snow conditions.

Camping in Inyo National Forest outside of Yosemite National Park 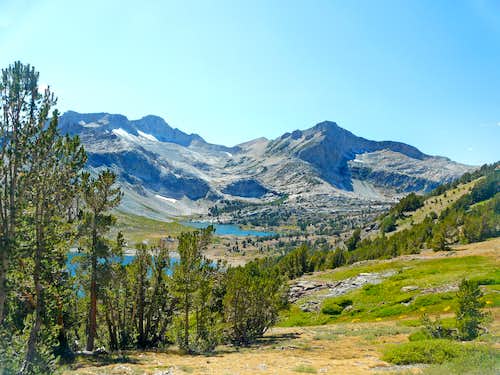 There is also the BIG BEND, ASPEN and several other campgrounds in Lee Vining Canyon starting 2 miles west of the junction of Hwy. 395 on Hwy. 120 off to the left at 7,200'

Dore Cliff,Pass
Paul Gustave Dore (1832-1883), a noted French artist and illustrator, who had great popular success for many years, especially in America and England. Named by Iseal C Russell, USGS, about 1882. "...a scarp of grander proportions than those below crosses the trough and forms a wall of rock more than a thousand feet high. This rocky wall, together with the cliffs forming the eastern side of the gorge as far as Lake Canyon, has been named, in honor of the great French artist, the Dore Cliffs." ( Russell, Quaternary, 332-33.) (INF)
Place Names of the Sierra Nevada, Peter Browning, Wilderness Press