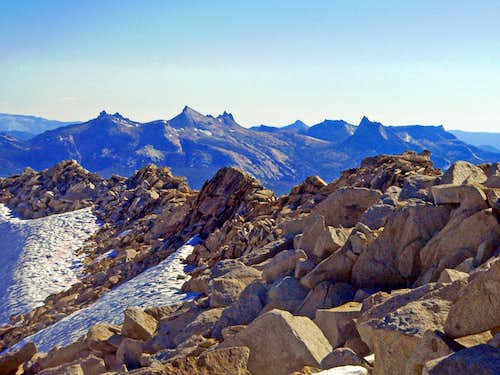 Cathedral Range from False White Mtn.
Just northwest of Tioga Pass the Sierra crest resumes with Gaylor Peak (11,004'). It drops off a bit for the next 2 miles and continues it's higher surge with a string of twelve thousanders that run along the northeast border of Yosemite National Park topping off with the popular and striking Mt. Conness (12,590'). The first 2 peaks are Peak 12,002' and White Mountain 12,057'. The first peak was most likely mistaken for White Mountain enough times to earn the unofficial name "False White Mountain".

This one is a day hike easily accessible from Tioga Pass. The east and south slopes are class 2 and are good ski runs. The west slope looks to be at least class 3. The summit has sweeping views of the Yosemite high country especially to the east and south. 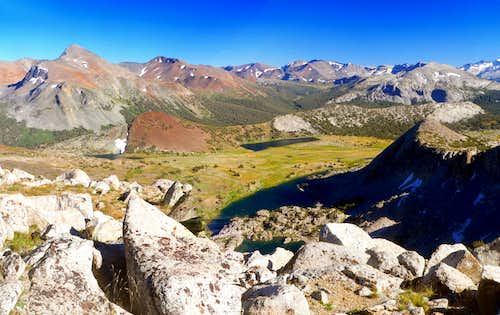 South from Sierra crest above Gaylor Lakes
SOUTH SLOPE FROM TIOGA PASS: From the junction of Hwy. 395 take Hwy.120 12 miles west up to Tioga Pass. Park at the pass and take the Gaylor Lakes Trail on the west side a short distance up to the crest at .4 miles. Follow the trail on down to the lakes and hike north 1.2 miles up to the crest at approximately 10,800'. Continue another 1.6 miles northwest traversing around a few small summits on the way to the summit of "False White Mountain".

SOUTH SLOPE FROM TIOGA LAKE: Instead of appoaching from Tioga Pass via Gaylor Lakes, take the class 2 slope across the road from Tioga Lake to the crest.

EAST SLOPE FROM LEE VINING CREEK: From the junction of Hwy. 395 take Hwy. 120 10 miles west up the the Saddlebag Lake Road. Go up the road a tenth mile and then left to the campground. Cross Lee Vining Creek and hike following it northwest to Shell Lake at .75 miles. Break off west up class 2 slopes to the east slope of "False White Mountain". The summit is 1.5 miles west of Shell Lake.

North pano from False White
Sierra crest north from "False White Mtn." If you do the south slope from Tioga Pass you can park just north of the pass and avoid paying the Yosemite entrance fee. Otherwise it is a 20 dollar fee coming from the west in Yosemite National Park good for 7 days. The east slope is in Inyo National Forest with no fees. 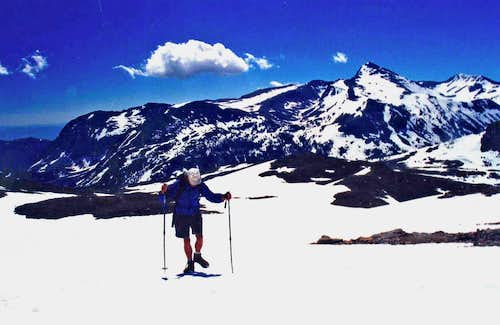 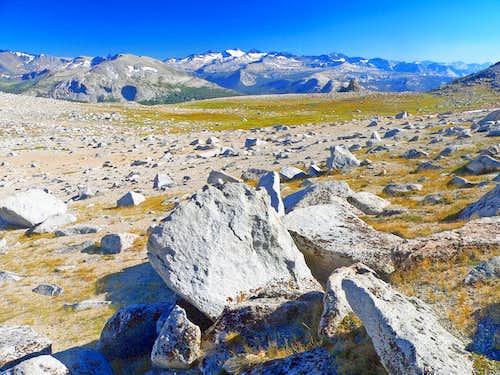 Before you get too far

Re: Before you get too far