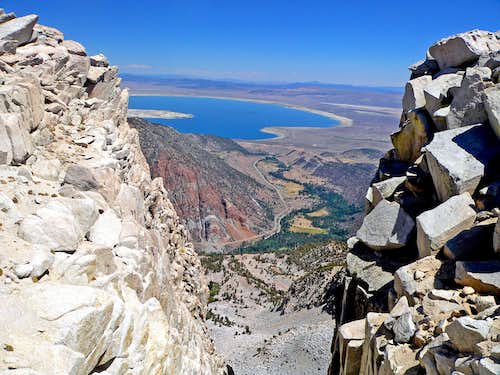 Mono Lake from the plateau

North from the plateau summit area
With it's easy accessibility and excellent views, Mt. Dana is the most popular 13'er in the Sierra. On a summer weekend with good weather you can find dozens of hikers coming and going from Tioga Pass to the summit. A half mile northeast of Mt. Dana over Glacier Canyon is the much less traveled Dana Plateau.
This is a huge high altitude mountain mesa 2 miles long and up to 3/4 mile wide ranging from 11,400' at the north end and gradually rising over 1,000' to a high point at the southwest end where it connects to Mt. Dana via a rugged cirque. Massive buttresses extending a mile down into Lee Vining Canyon appear as mountains themselves from below.
The northeast face of the plateau features the Third Pillar and other fine class 5 routes and is an impressive sight to travelers approaching Yosemite National Park via Hwy. 120 as it winds it's way up through Lee Vining Canyon toward Tioga Pass from the Mono Lake Basin. The whole plateau is worth exploring, especially the north and northeast edge.
There are fine views of the northern Sierra, jaw dropping looks down into Lee Vining Canyon, the Mono Lake Basin on out to the White Mountains and the eastern scarp of the Sierra as well as the northeast face of Mt. Dana. 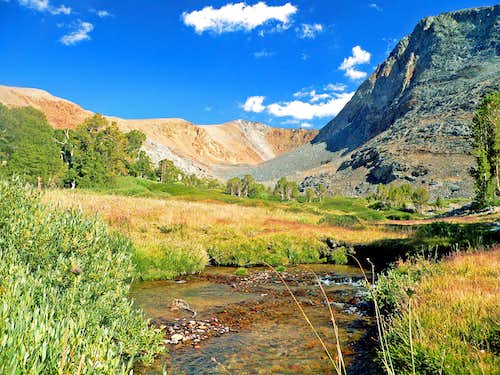 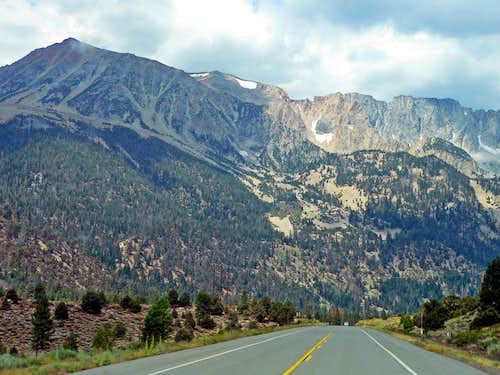 Northeast face of the Dana Plateau from Hwy. 120
Glacier Canyon route: (class 1-2) From Hwy 395 take Hwy 120 11.5 miles west to the south end of Tioga Lake. From Tioga Pass go 1.5 miles north to the south end of Tioga Lake. Hike west up into Glacier Canyon. There is a use trail that can be found on the north side of the stream flowing down from Dana Lake that gradually ascends west up from Glacier Canyon onto the plateau starting at about 10,500' .8 miles east of the north end of Tioga Lake. Once on the plateau go southeast to the high point that is obvious on the right.
Ellery Lake route: (class 1-2) From Hwy. 395 go 9.5 miles on Hwy. 120 to the west side of Ellery Lake or 2 miles north from Tioga Pass. Ascend the northwest ridge of easy stable metamorphic slate to the north end of the plateau. Go south to the high point.

Climbing routes: These routes are generally approached from the plateau the same as the others since an approach from the northeast would involve several thousand feet of gain with rugged bushwhacking to massive talus slogs.
"Third Pillar", regular route 5.10 A. Phil Bircheff and Bill Bonebrake, July 1969. "The best 5.9 pitch in the Universe"- Richard Leversee
"The One That Almost Got Away", IV, 5.10 C. Miguel Carmona and Alois Smrz, Sept. 4, 1990
"Lenticular Limbo", III, 5.10C.
Detailed descriptions of the routes can be found in "The High Sierra Peaks, Passes and Trails" by R.J. Secor 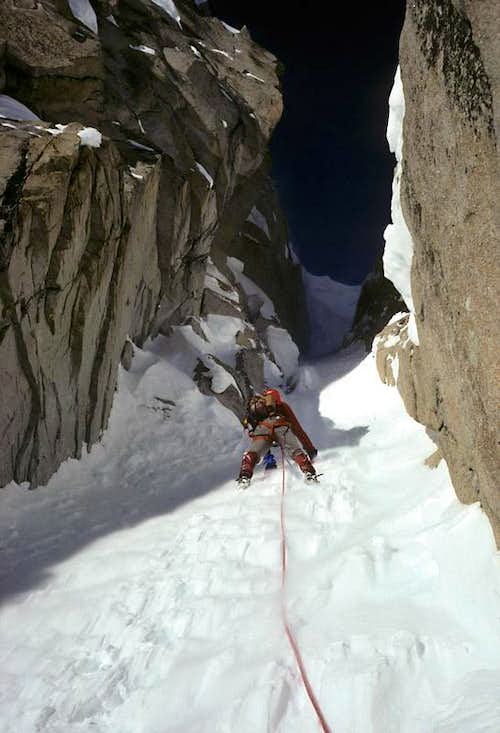 Climbing a chute on Third Pillar in winter 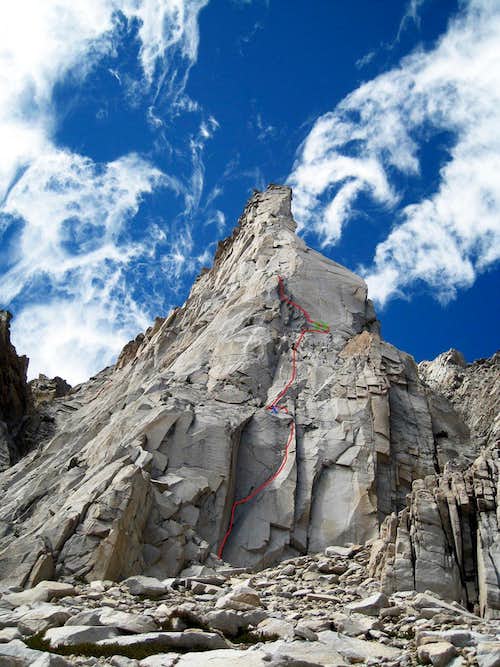 Third Pillar
No permits are required since this is in the Inyo National Forest. 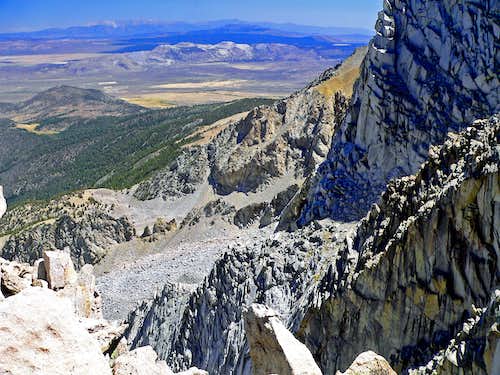 Southeast from the Plateau 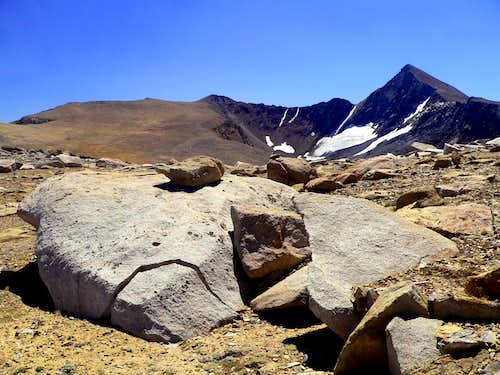