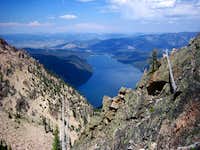 Situated 1 mile south of the Grand Mogul on the same rugged connecting ridgeline is Little Decker. Standing taller than the frequently visited Grand Mogul, and higher than the imposing Old Decker rock tower, Little Decker is the high point along a prominent ridge that forms the eastern front of the Sawtooths from Redfish Lake south to Decker Peak.  Little Decker is also the southern ridgeline anchor and high point of Saddleback Mountain, more commonly referred to as The Elephant's Perch.  Yet, there is no evidence that anyone had previously been to the summit of this interesting peak. No summit log, nearby cairns or internet documentation adds to the mystery of this peak.

The Outside Chance alpine valley just northwest of Little Decker, and just east of the Elephant's Perch East Summit, is one the hidden gems of the range.  This valley is a relatively close scramble from the trailhead and is protected nicely from the elements by the towering rocks around it.  Little Decker sits at the head of  the Outside Chance valley.  The valley is named for the relatively unknown rock climbing area on the northeast side of the Elephant's Perch.  Just above this valley (The Grand Mogul- Little Decker Ridgeline) is an excellent area for mountain goat viewing. 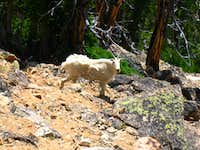 The character of the rock on Little Decker varies, but is mostly comprised of large, loose blocks of granite on the east, south, and north sides.  The west side contains some solid sections of steep rock.  For the most part, the nature of the rock in the Sawtooths does not lend itself to ridge traversing.  Little Decker, however, is one area where you can easily ridge traverse several peaks.  One possibility is the Elephant's Perch-Little Decker-Grand Mogul traverse. Another, more ambitious possibility, is the Decker Peak-Old Decker-Little Decker-Grand Mogul traverse.  The other great ridge traverse in the Sawtooth Range is the Williams-Carter-Thompson-Mickey's Spire-Limbert outing. This has the credibility of covering the tallest in the range, and the current  record for this traverse is 6.5 hours (car to car).

Special Note: There was a missing hiker in this area during the Summer of 2006. As of 2007, his body has yet to be recovered.  If you find anything unusual (clothes, body parts, notes etc), be sure to contact the owner of this page and I will contact the family. Then, the proper authorities will be contacted. This is the wish of the missing boy's family.

See the Routes page for more details on approaches from the north ridge. The West Face is the most solid and has potential for 1-2 pitches of Class 4-5 climbing, while the other sides are all Class 2-3. 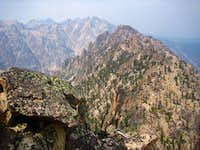 Little Decker is located about 10.5 miles south of Stanley, Idaho. The peak sits on the eastern side of the range in the central section of the Sawtooths. The Redfish Lake area is one of the busiest in the Sawtooths. Road Approach From Stanley, Idaho take ID-75 south for 5 miles and turn west (right) onto the Redfish Lake Road. Take this road 2 miles to the backpacker parking lot, or 2.5 miles to the Redfish lake Lodge for day hikers.  Hike / Scramble Approach Take the Redfish Shuttle Boat (seasonal) across the lake to save 5 miles, or hike around the lake (either side).  The fee for the boat ride is a rip-off, but you'll end up paying for it if you want to get high.

1) From the Redfish Lake Inlet Transfer Camp, follow the Alpine Way Trail south as it switchbacks up the moraine just to the east of the Grand Mogul. Leave the trail near the 8554 mark and scramble west up to the ridgeline.  OR 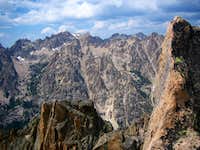 2) From the Redfish Lake Inlet Transfer Camp, follow the Alpine Way Trail south for 0.25 miles and leave the trail as you head toward Lily Lake. Continue up the slopes between the north side of the Grand Mogul and Redfish Creek. You'll pass the slot that is the approach for the Chockstone Couloir alpine climb.  Continue to ascend to the small slot that is the opening of the Outside Chance Valley, on the northwest side of the Grand Mogul. Continue to the head of the Outside Chance Valley as it levels off.

A Brief History of Sawtooth Climbing 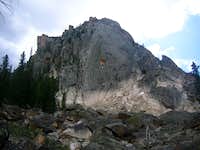 Dave Williams- one of the first Sawtooth climbers that lived in the Stanley area and did informal guiding for the Iowa Mountaineers that frequently visited the region (1940s). His climbing was probably in the 5.5 range at the most, but for the day that was considered the hardest. Williams Peak is named after him. Bob & Merriam Underhill- were two significant members of the Iowa Mountaineers that Dave Williams guided. Merriam is of particular note because she was probably the first woman climbing many of the peaks. They climbed and explored The Rakers, Heyburn, and Horstmann to name a few. Most of the pinnacles and peaks in the Fishhook Valley are named after Iowa Mountaineers. Mt. Underhill is named after them. Louis Stur- Hungarian immigrant known for not only doing hard climbs, but being a really nice person. The Stur Chimney on Heyburn is named after him. He concentrated on many of the impressive towers around Heyburn: Split Tooth, Grand Aguille, Black Aguille. He died on the north side of Baron Peak (His exploration was 1950-60's). Fred Beckey- hard man climber that made at least 1 whirlwind tour of the Sawtooths in the 1970's. His marks on the area include the Beckey tree on the Elephant's Perch and the Beckey Bolt Ladder (A1+) on Baron Spire. He definitely pushed the difficulty of the climbing here. At a recent presentation I asked him about the region and he remembered absolutely nothing! 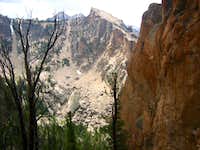 Lyman Dye- started a guide service in the 70's in the Sawtooths. While he never climbed real hard (above 5.8), he explored a lot of the Sawtooth peaks, including many 5th class towers. In a recent sit down with him he expressed that Packrat Peak was one of his favorite, underrated peaks. He said virtually no one ever asks him about the Sawtooths anymore and he was delighted to share his exploring with me. Kirk Bachman- guided since the 70's in the Sawtooths and also does backcountry skiing and river running. His Sawtooth Mountain Guides has been going strong now and offers many great classic rock climbing trips. In a recent sit down, Kirk knew many of the local names for the unnamed peaks that I've never heard of and he loved talking about climbs on obscure rock spires in the area. His ski hut sits at the base of Williams Peak. Tom Lopez- the author of Idaho's best, and only mountain guide book deserves credit for simply collecting an overwhelming amount of climbing info on so many diverse areas. He overcame the resistance to give up information about certain areas (a common Idaho rock climbing beta practice) and threats of violence to establish his book. It's hard to imagine just how difficult it would be to approach, and even know about, some of the published climbs in his book. Along the way, he did tons of climbing and a first ascent of Cabin Creek Peak in the Salmon River Mountains. 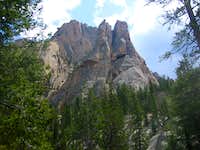 Mark Weber- documented some of his technical climbs in the Sawtooths including The Arrowhead, Eagles Beak, and Mt. Sevy. I applaud his willingness to make public his climbs and even so, these peaks see just a few, if any ascents per year. For example when I summitted The Eagle's Beak in 2006, the last person in the register was from 1991. Greg Parker- Greg has developed and documented many fine alpine routes in more recent years in the Grandjean / Baron Creek drainage area. His climbs on Warbonnet, Tohobit, Horstmann, and Grandjean are particularly impressive. He's always willing to discuss or help fellow climbers with some of the more obscure routes.

There are countless others that quietly made impressive ascents and lifetimes worth of achievement without anyone knowing. 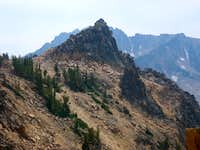 Sawtooth Climbing Beta is hard to come by. There is no official book or publication that gives detailed description. Here are a few references that have some more basic information and photographs on nearby climbs:

5) Idaho: A Climbing Guide by Tom Lopez- the best overall collection of information.  Covers a large number of peaks, but usually just a paragraph or two per peak, with no climbing topos. 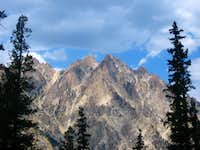 Conditions may vary greatly.  Access is typically from May to October.

The Redfish Lake area can be the coldest region in the lower 48 during the winter.  Summertime can be warm and dry, but the nights are usually cool.  Winter comes as early as October, or as late as December.  Approach roads usually don't open until May, but you can still ski the approach roads during the winter.  Winter ascents of all peaks except Williams and Crown Point are almost unheard of. 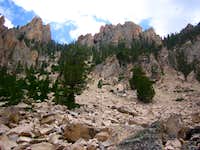 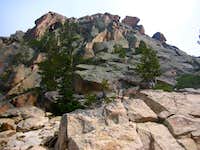