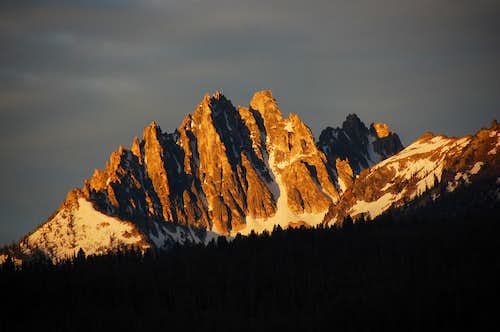 Mount Heyburn from the north at sunrise.
Photo by SawtoothSean 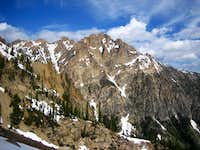 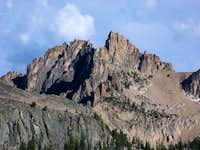 Mount Heyburn is the most visible, well known and according to guidebook author Tom Lopez, the most majestic of the peaks in the Sawtooth Range. From the valley, the mountain appears to have three distinct summits. There are an East and a West Summit with a difference in altitude of only one to two feet, the West Summit being the higher. The third high point is the West Pinnacle, which is noticeably lower. 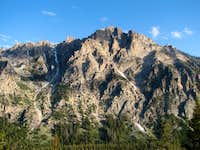 Climbs on Mount Heyburn can be accomplished in one very long day from Redfish Lake, or more leisurely with a camp near the mountain.

The granite in the Sawtooth Range varies from excellent, hard Yosemite quality rock to rotten, decomposed, virtually unclimbable, crumbling masses of what some authors have called "ball bearing stuff". Most of the West summit is composed of the latter, but it does have several fine routes including the classic Stur Chimney. The rock is reportedly somewhat better on approaches to the East Summit and the West Pinnacle is supposed to have very good rock.

Robert and Merriam Underhill with Dave Williams made the first ascent of Mount Heyburn in 1935 via the Southwest Ridge. 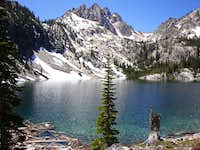 View from a Bench Lake

Mount Heyburn is located in the Sawtooth National Recreation Area, Sawtooth National Forest, in south-central Idaho. The nearest town is Stanley. Access to the mountain starts from Red Fish Lake which is 12 miles easterly from Stanley off Highway 75.

The Bench Lake Trail leaves directly from the parking area provided for backpackers at Redfish Lake. It is about 4.5 miles to the first of the Bench Lakes, then about 1.5 miles of rough trail to the highest of the Bench Lakes. From there one travels cross country to the start of the routes.

The Redfish Lake Creek Trail starts at the upper end of Red Fish Lake which can be reached by either a 5 to 6-mile hike around the lake or a short boat ride in season. Details regarding boat service can be obtained through the Redfish Lake Lodge at 208-774-3536.

There are no restrictions on access in the Sawtooth National Recreation Area except for large groups and pack animals in certain parts.

A Northwest Forest Pass is required for parking at the trail heads.

Stur Chimney ,II, 5.4 This is the classic route on the peak located toward the north end of the west face. It is approached from the saddle between the West Summit and the West Pinnacle which can be reached from either the Bench Lakes or the Red Fish Lake Creek Trail. There are two pitches in a classic chimney with overhanging chock stones. It ends almost directly at the summit.

Louis Stur, Jerry Fuller and Jim Ball made the first ascent on 1 October 1958.

Northwest Ridge, II, 5.6 Using a couloir to access the ridge leaves 3 pitches to the summit. First ascent by a group of Iowa Mountaineers in 1948. More direct variations have been climbed, also rated at 5.6.

South Rib, II, 5.2 Climbs the west and south faces of the peak.

Tunnel Route, III, aid, (A1?) This is the only reported route on the pinnacle. It ascends the pinnacle's north side which is reached from the saddle between the pinnacle and the west summit. 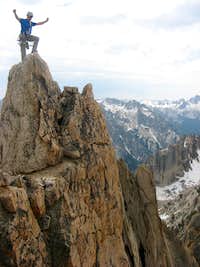 Camping is allowed with little or no restriction within the Sawtooth National Recreation Area. The best base for Mount Heyburn would be near the Bench Lakes.

Even though the mountain is named Heyburn Mountain on the USGS Quad, every other source that we have seen refers to it as Mount Heyburn. So, this is the designation that we have chosen to use.