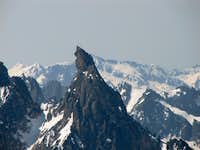 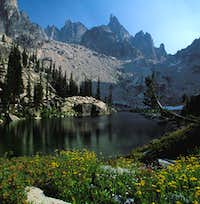 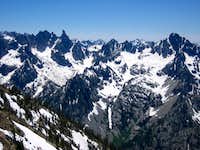 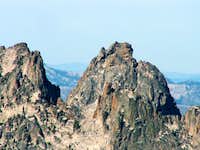 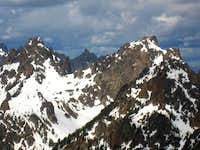 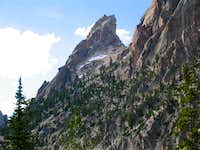 Warbonnet Peak is the crowning jewel of the Verita Ridge, a subrange of the Sawtooth Mountains of Idaho. With its distinctive shape - a series of subsummits arching back like the feathers in an Indian chief's headdress - the peak has been called the "Grand Teton of Idaho". The peak rises 1400 feet from Bead Lakes at its base. First ascent of the peak was made by a group of Iowa Mountaineers (incl. Paul Petzoldt) in 1947 via the meandering West Face Route (II 5.7).

The second route established on the peak by Louis Stur (responsible for many first ascents in the Sawtooths) et al was the South Face (currently the most common summit route). Stur wrote of the summit "The sheer walls on both sides of the 'rooftop' overhang meanacingly into nothingness down below.....a stone dropped from this point [summit] will fall for 9 seconds before disintegrating on the boulder fields below". Other notable routes on the mountain include Northeast Face (II A1) established by F. Beckey et al and the more modern Black Crystal Route (II 5.11+). Overview info. compiled from both T. Lopez' and A. Kearney's guide books.

Note the other Warbonnet peak. 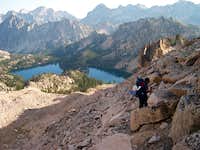 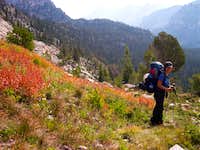 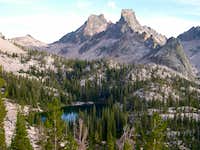 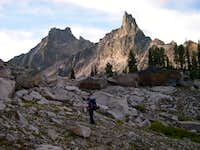 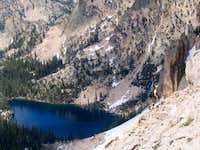 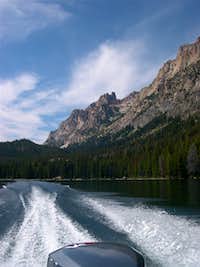 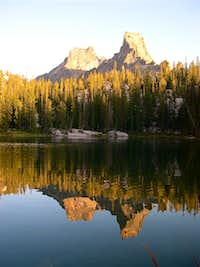 Warbonnet is located inside the Sawtooth Wilderness in south central Idaho. As the crow flies, the peak is approximately 70 miles northeast of Boise, ID. Driving distance from Boise however is approximately 140 miles. The most common starting point for the Warbonnet hike is Redfish Lake. Town nearest to the trailhead is the beautifully positioned Stanley, Idaho.

From the town center in Stanley (junction of Idaho highways 21 and 75), take highway 75 south for approximately 5.5 miles to the Redfish Lake turnoff, a paved road on the right hand side of the highway. Take that road following signs for the Redfish Lake Lodge (approx. 4 miles). The Lodge operates a high speed boat shuttle between the north and south ends of Redfish Lake. The boat ride reduces the hike in distance by about 4 or 6 miles (?) EACH way. The cost is $7.50 per person each way and is payable at the marina. The boat shuttle makes several scheduled runs per day (check with marina - those times have been changing) but it also leaves on demand from the lodge end of the lake (north end) for two or more passengers. The boat ride is approximately 7 minutes each way.

For more information regarding the boat shuttle contact the Redfish Lake Lodge at 208-774-3536. The Lodge operates a general store and a restaurant - both within 50 yards of the marina. Note that although it is convenient to drop off your packs right in the marina parking lot, you are not allowed to park here if you're going for an overnight trip. Overnight parking area is approximately 1/8 mile earlier along the Redfish Lake access road. If you do not wish to use the boat shuttle, you can hike the trail along the lake's northwest shore.

Once across the lake at its southern end (Redfish Inlet Transfer Camp), hike the Redfish Lake Creek trail southwest for 3.6 miles to the junction with the Alpine Lake/Baron Lakes trail. The trail is mostly flat and very well maintained (it also serves as the access artery for Elephant's Perch, home to the ultraclassic Mountaineers' Route, III, 5.9). Take the Alpine Lake trail right (west) at the junction and follow it for 1.8 miles to the northeast shores of Alpine Lake. Most of the elevation gain (6547 feet at Redfish Lake to 8337 feet at Alpine Lake) is gained along this section.

Once at Alpine Lake, pay close attention to the trail - stay on it until the third switchback (at 8600 feet). From here proceed cross country (no climbers' path) bearing west. The goal is to slowly gain elevation as you round the basin high above Alpine Lake. If you encounter difficult terrain, try to move higher. Your goal (will become visible as you clear the trees) is a high pass directly north of Point 9769 (a triangular hump marked on USGS Quad maps). The approach to the pass should not be stiffer than 3rd class. Once at the pass, traverse west/southwest under Point 9761 continuing to slowly gain elevation along a crude climbers' trail. You'll shortly come to another pass overlooking Warbonnet Lakes (approx. elevation of passes is 9400 feet).

Descend the sandy scree (again you should see a faint climbers' trail) down heading northwest above Warbonnet Lakes. Continue on a northwesterly heading slowly loosing elevation along the Feather Lakes (will be on your left). After Feather Lakes (which are a possible bivy site option for Warbonnet), you will come to a steep downhill section overlooking the next set of lakes, the Bead Lakes. That is your destination - the staging area for all Warbonnet routes (except for the Black Crystal Route). 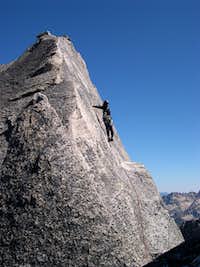 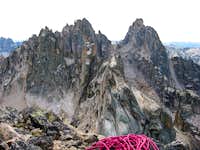 Saddleback Peak (Elephants Perch) is located within the Sawtooth Wilderness Area, operated by the National Forest Service. However, the Redfish Lake trailhead is run by Sawtooth National Recreational Area which used to have its own pass. As of July, 2005, $5 fee for parking at the trailhead is no longer required. This was confirmed in conversations with the staff at the store and also with several locals climbing in the area.

Furthermore, the Northwest Forest Pass does NOT seem to be required - we parked without one (just displayed the Sawtooth pass mentioned above) and did not score a ticket (even though the cars WERE checked).

Additionally, the area southwest of the Monte Verita Ridge (Warbonnet is part of that ridge) is considered sensitive. Among the restrictions imposed here is a no livestock, no horses, no dogs rule (though the latter two are allowed in most other areas of the wilderness). 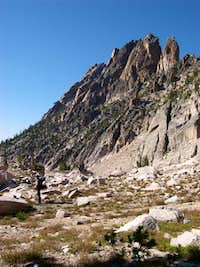 "Normal climbing season" - July through September - offers the most stable weather. Thunderstorms are a major concern during early summer months. Additionally, Idaho highway 21 (Boise to Stanley connection) is subject to seasonal closures due to snow.

Camping at large is allowed within the Sawtooth Wilderness. Several established bivy sites can be found at Warbonnet, Feather, and Bead Lakes. Please observe the usual backcountry camping regulations (in particular, please pack out solid waste as the lakes are largely stagnant in late season).

For most up to date conditions, contact the Sawtooth National Recreational Area office located in Stanley, Idaho at 208-727-5000.

Tom Lopez' Idaho - A Climbing Guide, Climbs, Scrambles, and Hikes provides a summary of most routes on the peak. The descriptions tend not to be very detailed given the format of the book.

Alan Kearney's Classic Climbs of the Northwest provides a realtively detailed description of the South Face route up Warbonnet. However, Kearney also includes a photo topo of the route which is simply wrong - it does not follow his text description and does not follow reality. It's only roughly correct for the lower 1/2 to 2/3 of the climb - the upper pitches are totally off.

Lastly, I've included a link which contains a topo of the South Face Route (author calls it SE Face) on Warbonnet. This is an excellent route description which we followed - except on pitch 3 (I suspect the author of the topo opted for the center chimney; my description of South Face talks about the left chimney). The topo also suggests a much better version of pitch 5 - the stellar 5.7 handcrack instead of the questionable 5.6 chimney mentioned by the guidebooks. However, the descent route described there is not as obvious/simple as the topo would suggest. UPDATE: In case you missed it, link now points to a page that is long gone (10/10/2004).

The enclosed beta for the approach is excellent. I would make one addition. After passing Alpine Lake you ascend to a pass on the northeast of peak 9769. When approaching the pass stay high and to your left as you ascend. Aim for a second smaller pass on the flank of the peak above a section of solid rock steps on the ridge. This is where you will find the climbers trail which easily traverses the talus slope and then drops into the Warbonnet Lake Cirque. Avoid crossing the pass at its lowest point as this leads you onto a very unstable and somewhat dangerous talus slope.

If you add new webbing to a route, please be sure to remove old, weathered webbing. Let's keep this wilderness climb pristine. If you camp in the area remember campfires are NOT allowed. Campfires in the Goat Creek Drainage are illegal! Be sure to pack out what you pack in. It is a privilege to recreate in the wilderness.