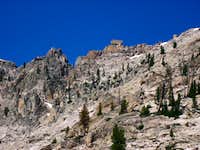 Situated on the main Sawtooth crest, just north of Mt. Sevy, The Coffin is an interesting and imaginative rock tower that requires aid climbing to reach it's flat summit.  Three of the sides overhang and all four sides are virtually featureless: no cracks, no knobs, no bolts.  The one side that isn't quite overhanging (east), has a rotten base that would impede most attempts.  After careful questioning of most of the Sawtooth hard men of technical experience, there's a very good chance that this rock feature has rarely ever been summitted.  The nearby Finger of Fate, with it's superb clean technical routes, along with the Hell Roaring Lake Road (one of the worst approach roads) may have contributed to this tower not having been "worked" yet.  Just to the south of The Coffin is The Birthday Cake (Red Bluff) and The Sentry which both have moderate to easy 5th Class routes.  Even further south, beyond Mt. Sevy sits one of the more challenging older free routes in the Sawtooth, The Arrowhead's West Face (5.9). 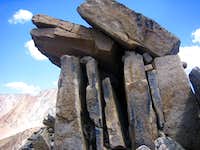 As one of the more distinguished formations in the area, this rock icon may have attracted prehistoric hunting around it's base. The large, tilted slabs of flatbed rocks along this ridge formed interesting "caves" and lean-to shelters.  The geology in this particular section of the Sawtooth Range is unique in that it is solid granite amongst very large slabs (sometimes stacked up and leaned against each other).  Rock hopping amongst these slabs requires careful attention, as it's easy to fulcrum a hot-tub sized slab. 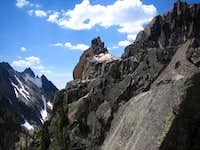 It's very possible that this rock could be free climbed, but it would require perhaps 5.11-5.13 moves with absolutely no protection, large jagged boulders at the base, and no good way to rappel off the summit. All this would be after a moderately long approach and at 10,000+ feet. 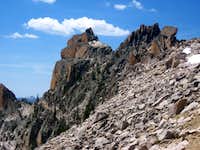 The Coffin is located about 2.8 miles due south of the Elephant's Perch in a pristine upper drainage on the north side of The Finger of Fate.  It sits on a main ridge (Sawtooth Crest) 1.3 miles NE of Mt. Cramer.

From Stanley, Idaho take ID-75 south for 12 miles, turn west at Decker Flat, cross the Salmon River and then drive 5 miles on one of the worst 4 wheel drive roads in Idaho. High clearance is required and large boulders need to be negotiated at times. I've seen sedans, but they must have been rentals.

From the trailhead cross Hell Roaring Creek (can be difficult crossing in high water), and hike a relatively flat trail for 1.7 miles until you reach Hell Roaring Lake (Elevation 7407). The main trail goes left here and out toward Imogene Lake. You'll take a climber's trail on the right hand side (north) of the lake until you reach a stream inlet at which the hiking steepens. At mile 3 (from the trailhead), you'll reach a gorgeous unnamed lake at 8179 feet. This destination makes a great bivy spot if needed. From here, follow the drainage that runs SE of the Finger of Fate. At about 8700 feet you'll turn due north and traverse just east of the Finger of Fate  with the full 1000 foot East Face (5.11) route visible. Continue rock hopping around toward the NE side where you'll pass the Open Book (5.8) route (Finger of Fate). Continue to following the valley west until you reach the east end of the unnamed lake near 9335 feet.  From hear look for the spur ridge to the north that connects to the prominent 10,000 foot ridgeline. Obtain the ridgeline and follow it easily SW toward the base of The Coffin.  The ridge is fairly broad and easily passable.

Another approach option is to obtain the 10,000 ft ridge from the west and Upper Cramer Lake. Start this approach in the Redfish Creek drainage. 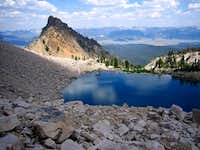 Conditions are often windy above 10,000 feet, especially on a major crest like this. Standard climbing season is June through October. Conditions vary greatly.  The Sawtooth Valley can be one of the coldest areas in the nation during the winter. Negative readings are often common.  Snowfall can vary and occur at any time. Summer days can still be hot, but you'll probably never experience 90 or above, especially once you get up higher. 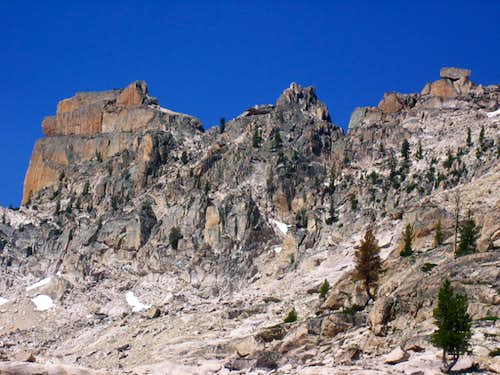