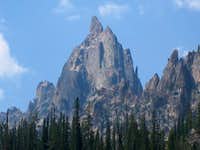 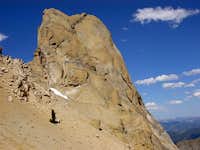 See The Complete Sawtooths List for every named rock tower, pinnacle, and unnamed mountain of note.

See Top 10: Easy Peak Scrambles in the Sawtooths for a great primer or starting point for exploring the Sawtooth Range.

Idaho's Sawtooth Mountains are the crown jewel mountain range of the state and the home of Idaho mountaineering and big wall climbing. In a treasure trove of rock climbs, couloir climbs and exposed scrambles, the region still retains a pristine and uncrowded nature, despite the creeping popularity.  The network of roads, approach roads, and trails are limited. Coupled with the extreme rugged terrain, the seriously guarded rock climbing beta by some older climbers in the area, and the concentration of tourists in the summer to one portion of the region, you typically have a relatively uncrowded backcountry experience.

Rock climbing in the region is only limited by what's been explored and documented. Many terrific new lines on peaks and pinnacles have yet to be explored and climbed.  You have to have endurance and determination because most climbs require rugged approaches.

Backpacking in the region is very popular and the many alpine lakes and streams provide amazing sites. Most sites require at least 4-7 miles of hiking into the backcountry.
Day Hiking is popular and there are many good trailheads with easy road access. Peak Bagging is steadily gaining popularity but many of the peaks require long day hikes or overnight base camps. 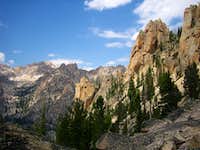 147 named or recognized peaks and towers exist in this area of roughly 30 miles from north to south, by 15 miles from east to west.  33 of the peaks rise above 10,000 feet and at least 40 prominent rock towers or peaks exist above and beyond this 116 that have no recognition. Some of these have never been climbed and most have absolutely no known information or first ascent data.

Out of the 147 recognized peaks, 1 has an official trail to it's summit (Observation Peak).

Here is a summation of the Peaks by Easiest Recognized Route Class:

The Sawtooth Mountains were heavily glaciated, resulting in granite, tarn lakes,
lateral moraines, and a few hanging valleys. The character of the rock varies
dramatically. Loose rock next to solid granite is the norm here.  Most of
the granite contains feldspar which gives it a more textured surface than smooth
granite.  Vertical fracturing and uplift have formed the striking rock
towers and pinnacles found in the region.  Glaciation left behind Idaho's
biggest concentration of alpine lakes. A great example of a lateral moraine is the high ridge above Redfish lake.

The best rock quality for climbing is found in the Redfish Lake, Hell
Roaring, and Monte Verita Ridge areas of the range.  Solid rock is found in
other parts of the range in more limited stretches. A first time visitor to an
off trail adventure here, is typically appalled by the loose nature of the rock
and at the same time humbled by the solid , exposed granite that's easy to get
onto. A general rule of thumb when trying to determine the rock quality is to
look underneath the rock feature or gully in question.  A pile of small
scree is an indicator that the feature is loose and brittle. A pile of large
talus boulders or a lack of rock with just vegetation is a good indicator that
the feature above is solid.

Bob & Miriam Underhill came to the Sawtooth Valley in 1934. Bob had introduced modern rock climbing techniques to the Sierras and established the hardest climbing grade of the day with the North Ridge of the Grand Teton. The Underhill's companion during this period of early Sawtooth climbing was Dave Williams.

Dave Williams came to the Sawtooth Valley and etched out a living doing various jobs. He had opened his own dairy and butcher shop, delivered the mail up and over Galena Summit (nearly 9000 feet- and can still be tough to get over in a car!), and worked the Vienna Mine south of Stanley near the Smiley Lodge. Like many Swiss guide, his hunting of goats led him high on the mountains and developed into a love of climbing. He informally guided Robert and Miriam Underhill of the Iowa Mountaineers up many of the local peaks like Mt. Heyburn and the first ascent of Williams Peak. He was considered a local expert in his time in terms of rock and mountain climbing skills and was always enthusiastic and willing to climb.

Enticed by the writings of the Underhills and Dave Williams, the Iowa Mountaineers entered the area after World War II and established a good number of first ascents.  Led by John Ebert, the group established route firsts on Chockstone Peak, Goat Perch, Redfish Peak, Mount Carter, Schwartz Pinnacle, Mt. Bush, Mt. Iowa, Mt. Ebert, and Warbonnet Peak. In 1947 Paul Petzoldt and the Iowa Mountaineers made the first ascent of Warbonnet Peak. Also during this time, a cluster of new routes were established on Mt. Heyburn, including the Petzoldt Couloir that bears his name.

The Grand Aiguille was finally climbed during this period and Fred Beckey first appeared on the Sawtooth scene. His visits were done in typical Beckey fashion- intense and difficult climbing accomplished in little time as possible.  He periodically visited the region thereafter, establishing such hard classics as the Beckey Bolt Ladder on Baron Spire.  Also to his credit are ascents of the West Pinnacle, The Thimble, El Pima, Splinter Tower, and the daunting North Raker.  This spectacular tower is seldom visited, rarely photographed, and less often climbed. The easiest route is a hard aid route (Class 6). During a recent discussion, Beckey remembered little of his Sawtooth days.

In 1954 Louis Stur, a Hungarian immigrant, climbed Mt. Heyburn for the first time. He teamed up with Beckey and Jerry Fuller for some of his climbs. He pioneered 3 routes on Warbonnet, and his Stur Chimney Route on Heyburn is a classic. His personality was always positive and infectious.  He died after a fall while exploring a chimney on Baron Peak in 1989.

During the 1970's, the massive sheer wall on the Elephant's Perch was finally explored and developed.  Beckey, along with Greg and Jeff Lowe established routes on the wall. Around this time, Lyman Dye established a guide service and explored and guided such groups as the Mazamas and the Iowa Mountaineers. Kirk Bachman established his Sawtooth Guide Service in 1985 and had established some interesting and difficult rock and snow routes in the range in the years prior.  In the 1990's Tom Lopez published his "Idaho: A Climbing Guide" book. The Sawtooth section provided information never before seen in print. Unfortunately, much of the information in the first edition was sketchy or second hand information that lost accuracy during translation. To his defense, many climbers from the previous era intensely guarded their rock climbing information and the original intention was to whet your appetite for climbing in the region..  The latest edition of Lopez's book is a vast improvement in regard to the Sawtooth area- better accuracy, more photos, diagrams etc.  You will not, however, find a climbing topo for any of the routes in his book.  Still, this book remains the best source of information for climbing in the Sawtooth Range. 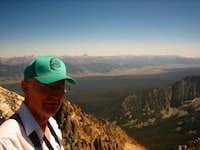