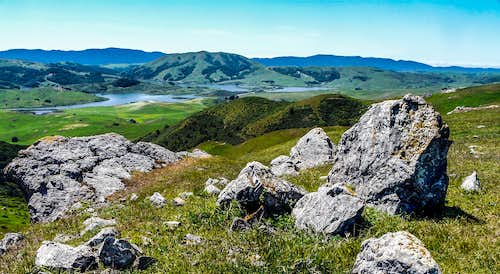 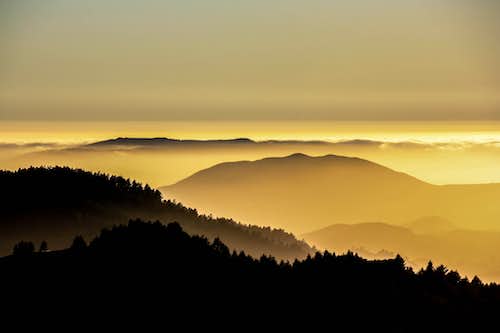 The County of Marin, north of the Golden Gate is primarily a peninsula composed of hills, ridges and small mountains. Some of the "hills" are higher than the "mountains". Most of the populated areas are along the eastern side in the lowlands by the North Bay. The lions share to the west is rolling, mountainous and hilly ranchland, including Open Space, State Parks and the Golden Gate National Recreation Area as well as Point Reyes National Seashore.

This page attempts to feature a comprehensive listing of all but a few named highpoints throughout the county as well as a few unnnamed ones. Like all mapped geographical regions the naming of features is somewhat arbitrary. Some prominent ones are left unnamed while some insignificant ones are. Most of them are accessible to the public and some are on private lands. Everything is featured starting from the highest elevation to the lowest. Each one also includes what type of land it is on and the accessiblility. The ones with quotation marks are unnamed but given names for this page. 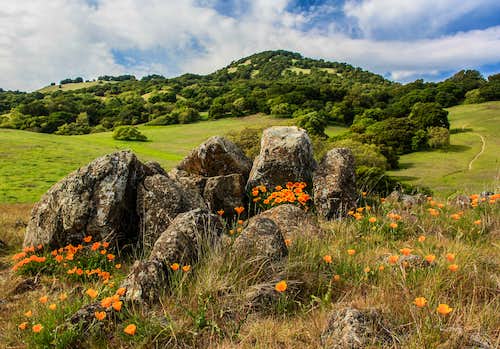 When to hike and what to expect 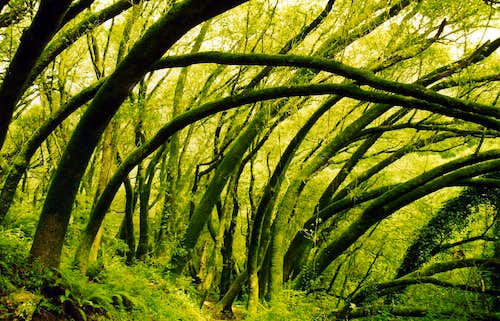 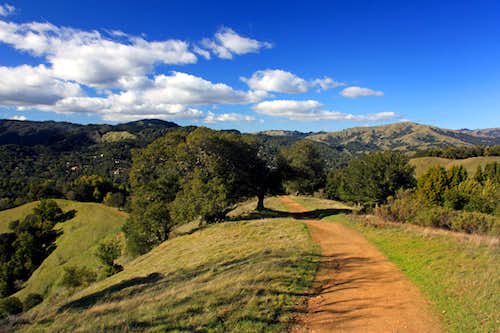 All of these mountains, ridges and hills can be climbed year round. Even in raging rain storms ripping off the Pacific it can be an exhilarating hike if you've got some simple light weight rain and wind attire. There is seldom lightning accompanying these rainstorms in the bay area unlike the Sierra. In the summer when there is low pressure along the coast the fog tends to move into the county over the hills on the heels of a westerly wind during the course of the night, especially over the Inverness Ridge and the west Marin hills but often burns off by afternoon. The more inland you go the warmer and calmer the weather, If it's hot inland you can go out towards the coast for cooler hikes. On hot summer days it can reach near 100 by mid afternoon. The use of sunscreen cannot be underestimated.
Regardless of the time of year unless it's a super hot day it is always good to bring plenty of water, a snack and at least a windbreaker. No matter how mellow it is at the bottom by the time you get up 1,000 ft or so it can get windy and significantly cooler.
There need not be much concerned for insects. There are virtually no mosquitos but in the summer when your are trudging and sweating up some hot hillside in the sun the horse flies can attack you at your weakest depending on the numbers produced by the previous winters rainfall.
Springtime is the best time with the hills green and wildflowers arriving by March. In summer the hills dry out and become brown.

Very popular "Mt. Tam", as it is called by the locals,  is one of the SF Bay areas most prominent natural landmarks. The East Peak and shoulder with it's sweeping east ridge is visible for many miles all around the bay on a clear day. It offers recreational activities from nature walks, an annual mountain play,  mountain biking, hiking and rock climbing. The mountain has 3 summits and has a rich history behind it including a small gauge railroad that once snaked up to just below the East Peak. The Panoramic Highway and Ridgecrest Road lead all the way up to within a short distance from the East Peak where parking leads to a walk-up trail.
Mt. Tam is the main feature of Mt. Tamalpais State Park and the stunning views from the East Peak are unmatched around the bay.

The Bolinas Ridge runs above the east side of the San Andreas Rift Zone along the west coast of southern Marin County. It gradually gains elevation for approximately 15 miles from Point Reyes Station and tops out at about 2,100' where it connects to the southwest end of Mt. Tamalpais. There is a fireroad and the Panoramic Hwy. running along the top most of the way. It is part of the Golden Gate National Recreation Area. A large portion of the northwestern fireroad runs through forest but as you come to the Panoramic Hwy. it becomes paved and the views out over the ocean and down to the Golden Gate are outstanding. The Panoramic Hwy. has been used to film car commercials for years

Big Rock Ridge runs east to northwest for about 5 miles in the northern part of the county between Lucas Valley and the town of Novato. Most of the ridge is part of Marin Open Space land. The ridge gets higher as it goes to the west with a series of small peaks culminating in the massive rolling highpoint with transmission towers. The views from the 1,650' highhpoint are some of the finest in the northbay.

Pine Mountain (and Pine Mountain Ridge, 1,700') in the Marin Municipal District Watershed 5 miles northwest of Mt. Tamalpais is where mountain biking got it's start. Carson Falls at the foot of the south slope is a popular hiking destination in the rainy season. 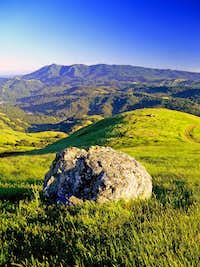 This is the enormous rolling hill in between Lucas Valley and White's Hill. It is part of Loma Alta Open Space and it's often windswept summit is accessible from east, north or south.

The 1,575' highpoint on this ridge sits across a deep valley northwest of Big Rock Ridge a few miles west of the town of Novato in the northern part of the county. Indian Tree Open Space brings you up to the ridge but the peak is on private property.

Burdell Mountain a popular destination north of the town of Novato is the main feature of the Mount Burdell Open Space Preserve. It also includes Olompali Historic State Park on it's north side.

Hicks Mountain is an isolated peak a few miles north of Nicasio Reservoir in the northwest part of the county. It is on private land.

This is the highpoint of Samuel P. Taylor State Park. It is a popular hiking destination a couple of miles northeast of the Bolinas Ridge. The top which supports a fire lookout and a giant cell phone tower has good views west to Tomales Bay and the Inverness Ridge.

Shroyer Mountain is a large mostly forested mountain that sits between the west end of Big Rock Ridge and the small town of Nicasio. It is on private property.

This outstanding viewpoint is a horseshoe shaped hill centrally located and is part of White's Hill Open Space. 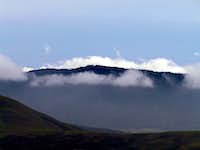 Mt. Wittenberg is the highpoint on the Inverness Ridge in Point Reyes National Seashore. It is a fairly popular hike. The summit area is largely overgrown with pine trees limiting the views.

These are 3 peaks in the far northwest part of the county above Salmon Creek. The first 2 are fairly rugged and forested approximately 1,320' and 1,290'. The one at the east end is a rolling grass covered hill 1,378'. They are on private property.

This is the unnamed highpoint at the northwest end of the ridge that runs above the north side of San Geronimo Valley about 2 miles west of Loma Alta. There is an Open Space trail leading up to the ridge from the Nicasio Hill Road but the highpoint is on private property.

Point Reyes Hill is the other major highpoint along the Inverness Ridge northwest of Mt. Wittenberg in the Point Reyes National Seashore. The top is a flat plain with a radio range. It has good views out to Point Reyes to the west and good views of the hills of northwest Marin. 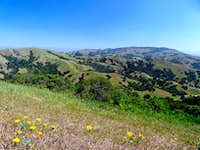 This is a group of rolling hills a few miles west of Burdell Mountain northwest of Novato and north of Stafford Lake. It has one named highpoint called Red Hill, 1,257' that overlooks Hicks Valley to the west. The highpoint tops out at 1,296'. This is on private property.

This is the beautiful isolated hill above the west side of Nicasio Reservoir with outstanding views of the northwest part of the county.
It is on private property but there is a a free annual hike open to the public that is organized from the town of Point Reyes.

Chileno Hill rises above Chileno Valley across from Laguna Lake in the northwest part of the county. It is on private property.

This easy walk up highpoint is next to the Bolinas Road above Alpine Lake in the Marin County Water District with good views of Bon Tempe Lake and Mt. Tamalpais as well as across the north bay. 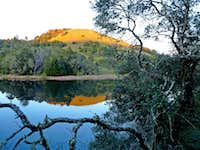 This is a small hill just west of Lake Lagunitas in the Marin Water District. A quick hike brings you to a front row seat view of the northside of Mt. Tamalpais East Peak.

Antonio Mtn. is a small mountain just east of "Chileno Hill" above Chileno Valley in northwest Marin. It is on private property.

Three Peaks rises about a mile southwest of Soulajule Reservoir in the far northwest part of the county. It is on private property. 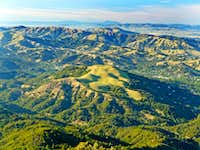 Bald Hill is a popular hiking destination with outstanding views in the Bald Hill Open Space Preserve above the west side of the town of San Anselmo. It has one of the best views of the north side of Mt. Tamalpais. 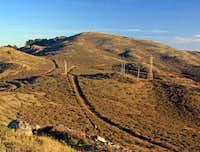 This is the highest hill in the Marin Headlands above the town of Sausalito with radio towers on top. It has outstanding views of San Francisco, the Golden Gate and San Francisco Bay.

This is a big sprawling plateau west of Nicasio Reservoir and north of Barnabe Mountain in the western part of the county. This is cattle country in the Golden Gate National Recreation Area.

This is the isolated ridgeline mountain northeast of San Rafael and bordering the northbay. It's a popular hiking and mountain biking destination which includes
China Camp State Park.

This is the highpoint on the ridge between Corte Madera and Mill Valley in the Blithedale Summit Open Space Preserve. It is also known as "Christmas Tree Hill".

Coyote Ridge is one of the outstanding highpoints in the Marin Headlands between Green Gulch and Tennessee Valley.

Wolf Ridge is one of the hills in the Marin headlands. It is in the southwestern part above Rodeo Lagoon and has old abandoned military installations on it's level summit. It has good views of the Golden Gate area, Rodeo Lagoon, the Pacific Ocean and north to Mt. Tam.

Little Mountain is the small hill west of the town of Novato and east of Stafford Lake. It is the principal feature of the Little Mountain Open Space Preserve.

Mt. Livermore is the high point of famous Angel Island in the north bay within the boundaries of Marin County. This is Angel Island State Park. The views from the top of this easy walk up are outstanding.
It is only approachable by kayak or public ferry. 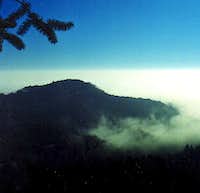 King Mountain is a small mostly forested peak that rises above the west side of the town of Larkspur and less than a mile east of Blithedale Ridge in the central Marin area. It is the principle feature of King Mountain Open Space Preserve. This is a very popular and accessible hiking destination with easy trails. Part of the top of the mountain is private property.

Ring Mountain is the large rolling hill with 2 highpoints between the towns of Tiburon and Corte Madera at the north end of the Tiburon Peninsula. It is the main feature of the Ring Mountain Open Space Preserve. 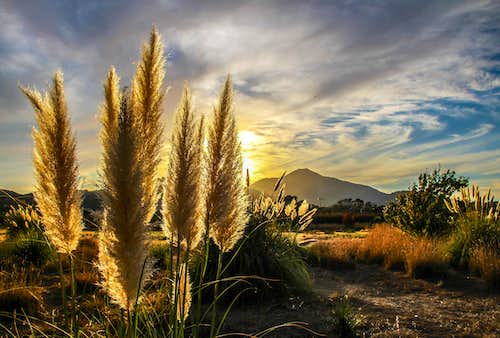 Click here for the current weather and 5 day forecast. 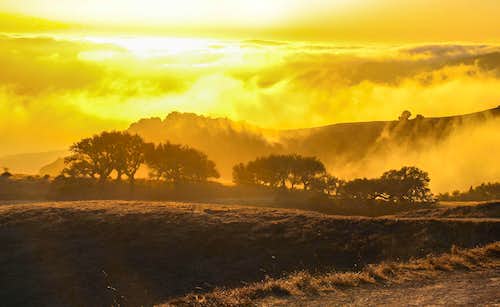 The county is named for "Marin" a big time chief of the Licatiut tribe. His birth name was Huicmuse until babtized "Marino" at 20 years old. He was born into the Huimen people. This was a coast Miwok tribe who inhabited the San Rafael area.