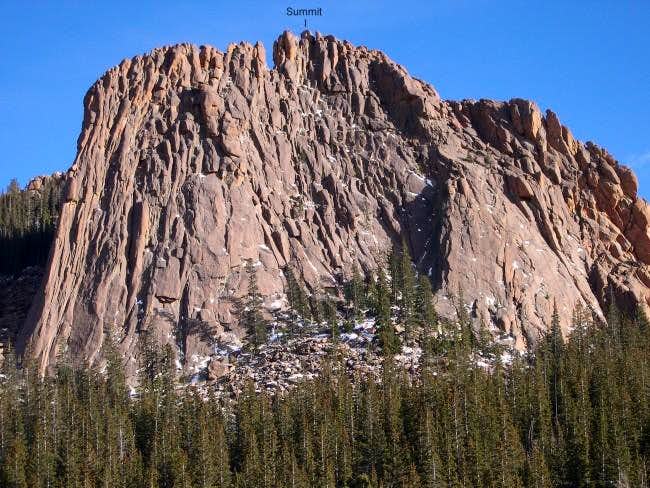 A few years ago while hiking up McCurdy Mountain, I couldn’t help but notice a really cool looking place off to my right. I remember seeing a large, grassy meadow with towering rock formations in all directions. I made a mental note and later discovered this place was actually named: its name, McCurdy Park.

Nestled in between the McCurdy Mountain Massif and the Tarryall Massif resides McCurdy Park. This park or area is not a popular place, so labeling it a “secret hideaway” is not too far off base. But it is a place where those who know of it, keep going back. I have endured the 5-mile and 2,500-ft approach on seven different occasions. There seems to be a sense of exploration for me every time I go back, which is very appealing to my primitive ego. For those of you that endure the worthwhile but long approach, be prepared for a truly spectacular place. A place where gnarled pinnacles of pink granite reach for the sky! This craggy wonderland is hands down, the best place to experience the true beauty of the Lost Creek Wilderness.

The "trophy" crag within this park is McCurdy Tower, which is the southern portion of the McCurdy Tower Massif. McCurdy Tower consists of highly featured granite that sweeps up 550 vertical feet from the grassy meadows of McCurdy Park to an extremely exposed 11,375-ft summit.

Only 200 yards north resides Point 11,380, which harbors the true summit of this massif. This collection of nearly vertical rock spires is as imposing as anything around. A treeless saddle in between these two craggy summits provides a nice place to rest and view your future challenges.

Both the northern and southern summits are very difficult to reach; both require exposed class 5 moves that will challenge anyone’s physical capabilities, especially the monolithic boulder summit on McCurdy Tower. Mental strength and a rope is highly recommended if your mind is set on attaining these summits.

The standard 5.6 Blockbuster Route consists of three pitches of moderate climbing, on “grippy”, crystallized granite complete with an abundance of knobby handholds. Also, the fractured nature of the granite walls within McCurdy Park and McCurdy Tower provides some of Colorado’s best crack climbing. Thus, the potential for discovering new routes on this tower and in the Park is very possible.

Here is an excellent link describing the Blockbuster Route on the Tower.
Climbingboulder.com

From the dividing saddle, observe the Towers dramatic east ridge that descends all the way to your feet. The route up to the summit ramparts of McCurdy Tower hugs this wall of rock all the way up, about 200 vertical feet. Using large boulders and trees follow the path of least resistance up to the summit area (easy class 3 if that). During your ascent, there are a few places to climb out onto the exposed east ridge and view your surroundings, what fun!

After reaching the summit area, its obvious where the monolithic summit boulder resides. Getting on top of this boulder requires a few 5th class moves, and the exposure is severe down the west face. A slip would likely send one plummeting down the west face; so a short rope is recommended. There is no protection available here so a belay is your best bet. Getting back down is another dicey problem. Maybe someone can spot your feet, or maybe you can just commit to a nice jump-Yikes!

Although the Tower is the most dominating feature residing within the massif, unnamed point 11,380-ft is not too far behind. Point 11,380 is stunning to look at. Locating its summit, which is the highpoint of this massif, is fairly easy for it looms almost directly above the saddle that separates the tower from Point 11,380. Upon closer viewing, there is another sub-summit further north at the end of an exposed ridge consisting of even more rock spires.

First, my attempt of the true 11,380-ft summit came up short by about 5 feet. After a short but tough class 4 chimney up to a platform, I was turned around by an exposed class 5 move. Although I did not actually make the summit, I feel as though I have enough credible and useful information that will help those willing to bring a rope. As a consolation prize we did attain the far north sub-summit of Point 11,380-ft, which required an exposed, solid class 3 climb and ridge traverse out to its summit.

From the saddle you can see the true summit, it is the highest point on the wicked south ridge. I’m not even sure this is a ridge but more a collection of vertical rock pinnacles. When viewing the summit you can see a steep, dark chimney that ascends to an exposed rock platform maybe 5 feet from the summit boulder. This is the route. Staying to the left of some initial towers, work your way up the class 2 talus until you reach the true summit block of Point 11,380-ft. There will be a chimney directly ahead; this is the way up and without a doubt, the easiest route. There were even a couple of small rocks stacked at the bottom that will give you a boost up into the chimney. This chimney is short, but it is solid class 4 with some exposure. The chimney will lead you to an exposed, level platform that is actually a spot directly on the imposing south ridge of Point 11,380-ft. This platform is a tight spot to be in, and there is not much room to move around. From here the next move on to the summit boulder is class 5 and exposed. There is a boulder that slightly overhangs above your head and it bars an easy passage up onto the summit. Because of the tight place on that platform, the required class 5 move up and around that overhang is very tough commitment without some type of protection.

The only non-technical way to reach the northern endpoint is via a solid class 3 climb to the ridge crest. The route continues on an exposed class 3 ridge to Point 11,380’s sub-summit. This is a really fun route that puts you in a magical place, where the views of McCurdy Park will blow you away. The end of this ridge is an obvious place, where views of undocumented spires and rock towers will inspire future exploration. To the northwest is Point 11,106-ft, which sports a vertical 400-ft rock wall and to the north is the Refrigerator Gulch, another rock wonderland.

From the saddle between the Tower and Point 11,380, locate the northern endpoint on the level ridge. This ridge is festooned with rock pinnacles and fractured “finger-like” walls of granite; it is beautiful to look at. Hike the class 2 talus to the left of the south ridge, staying as close to the ridge as possible. Pass the steep chimney that ascends to the true summit and continue maybe another 50 yards. From here with a little route finding, locate a class 3, ramp, consisting of vertical steps. Ascend this steep ramp, using the path of least resistance until you reach the crest of the ridge. From here the views are good, but they get better the further you traverse out onto the ridge. From the ridge crest, do some fun class 3 climbing, and descending until you reach an obvious stopping point in the ridge. Directly in front of you, locate an exposed class 3 skinny ramp that descends about 15ft. This is the route. Descend this airy ramp down to the ridge and continue another 20 yards to the very end of the ridge.

The end of this ridge is an obvious place, where views of undocumented spires and rock towers will inspire future exploration. Hold on to your hat, for views of Point 11,379-ft will blow you away. To the northwest is Point 11,106-ft, which sports a vertical 400-ft rock wall and to the north is the Refrigerator Gulch, another rock wonderland.

Starting at the Twin Eagle TH (8,540-ft.), cross Tarryall Creek on a good bridge and hike .03 mile to the Brookside-McCurdy Trail. Your view of McCurdy Mountain here is inspiring. Go left at the register sign-in and follow the trail past some private property at the base of the McCurdy Massif. After 1.4 miles you will intersect the Hankins Pass Trail junction at 8,900 ft.

Continue 1 mile to the Lost Creek Wilderness Boundary at 9,500-ft. Continue another 1.2 mile as the trail switchbacks up a major drainage that separates the McCurdy Massif from the Tarryall Massif. At 10,740-ft you will come to a pass. From the pass, stay on the trail and descend 200-ft down to a beautiful meadow. Once you descend 200 vertical into the meadow you finally get your first glimpse of the towering rock formations of McCurdy Park. Stay on the right side of the meadow for .03 mile until the trail crosses the meadow.

Leave the trail here by staying on the right side of the meadow; the actual trail will cross to the other side of the meadow. Once off the trail, continue up this shallow drainage for another quarter mile. Leave this drainage and ascend an easy slope northeast until you reach another shallow drainage and meadow. Refer to topo map. From here you can see the McCurdy Tower Massif. Head for the saddle that separates the Tower from Point 11,380. Do this by ascending about 300 vertical, up a steep, tree-laden slope littered with talus. Routes for the northern and southern half of the massif start here.

From Denver Colorado, travel Hwy 285 past Aspen Park, Conifer, Pine Junction and Bailey. Continue to Kenosha Pass where you will find the Kenosha Pass Campground. It is only one hour from Denver to Kenosha Pass. Continue to the tiny town of Jefferson and turn left on Park County 77 (Tarryall Road). This road is located directly before Jefferson's only convenient store. Continue 16.9 miles on the convenient paved road to Tarryall Reservoir. Continue passed the Ute Creek Trailhead at 3.3 miles beyond Tarryall Reservoir. Continue another 3 mile to the signed "Twin Eagles TH" turnoff. There is plenty of parking. It shouldn't take more than two hours to get to this TH.