The Lost Creek Wilderness Area protects nearly 120,000 acres in the Tarryall, Platte River and Kenosha mountain ranges in central Colorado. This relatively new wilderness (designated in 1980) is loaded with hiking, backpacking and climbing possibilities. Typical LCW landscape will consist of mixed and very dense forests, open meadows, small streams; somewhat the norm for Colorado’s high country. Upon first sight, it’s possible the casual climber or mountaineer may not be too impressed with the typical LCW mountain configuration. Dense, tree-laden slopes that often lead to tree-covered summits might easily rekindle a forgotten bad memory of your most frightening bushwhacking experience ever.

Despite lacking the alpine scenery of other Colorado Wilderness areas, one can argue that LCW may be one of the most unique Wildernesses in Colorado. Upon closer inspection the LCW has its own character that no other place in Colorado can match. Character that includes some of the most bizarre rock formations you will ever see. A lot of the LCW is dominated by incredible rock formations, including massive polished granite domes and towering spires. With elevations ranging from 8,000 to 12,400 feet, many of the mountains here sport huge, wide-open plateaus providing easy hiking and excellent views. Getting to those plateaus is another story.

I have thought long and hard about submitting this obscure and unique mountain to Summitpost. Undoubtedly, this unofficially named peak (Catamount) and ridge (Shark Fin) are among the least frequented summits in Colorado. But in the end, the "Catamount" and its graceful southwest ridge "Shark Fin" are excellent additions to SP and will forever be disguised behind a mask of low elevation.

The ”Catamount” or UN11,695 has two very distinct and impressive ridges that extend from its summit; the southwest ridge which I call “Shark Fin” and its south ridge or the local name "Twin Eagles."

When viewing the Tarryall massif from rd-77, it's tough locating the “Catamount.” The summit gets lost in the surrounding rocky mayhem. However, locating the two jagged ridges that resemble both of my given names is quite easy. These two ridges are the rocky ruggedness that your eyes tend to lock on-to. Undoubtedly the “Catamount” was named for the two huge rock pinnacles that grace the south ridge and resemble the ears of a lynx cat. The complicated terrain in between the two ridges and around the immediate area is some of the LCW’s most pristine and spectacular; it may be some of the most rugged as well. It is a rock wonderland that will forever call my name.

As of 2003, only 9 people had signed "Catamount's" summit registry since its placement in 1988! Of those 9 people Mike Garret (co-author of Colorado's Thirteeners had signed it twice and someone named Steve Mitchell had signed it 4 times, leaving only 3 others in 15 years to sign it. A well-respected Colorado mountaineer noted to me that she knows Mr. Mitchell and it really says something about this mountain if he has climbed it on 4 different occasions considering his mountaineering prowess. Needless to say I felt privileged to sign my name on the summit register alongside my climbing buddy Josh (SP Edgy).


The "Catamount" or UN11,695 (per USS quadrangle) rests prominently only .3 mile south- south west of its higher neighbor "Tarryall Peak" (11,780-ft.). The name "Catamount" comes straight from the summit register, and means cat-a-mountain or cat of the mountain (per Webster's), a fitting name for this very cool and guarded summit.

Some confuse this unnamed peak with the published "Tarryall Peak" or even "Lake Park Peak" because the both mountains are represented in Jennifer and Gerry Roach's excellent LCW guidebook, but the "Catamount" is not.

This mountain has a myriad of confusing ridges extending from its summit block. All of these ridges are infested with deep and unpassable notches. Many of these ridges not only extend out from the summit block but actually criss-cross over other ridges. 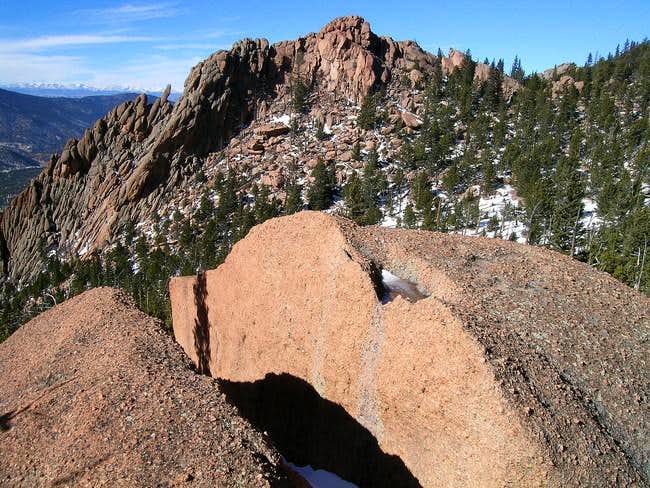 The "Shark Fin" is my name for the towering southwest ridge that splits the west face of the Tarryall Massif. This ridge originates a few hundred feet below the "Catamount."

Undoubtedly the “Catamount” was named for the two huge rock pinnacles that grace the south ridge that up close resemble two eagles flying side by side. The complicated terrain inside the two ridges and around the immediate area is some of the LCW’s most pristine and spectacular; it may be some of the most rugged as well. It is a rock wonderland that will forever call my name.

Although I was unable to summit “Twin Eagles” due to a technical climb beyond my abilities, I did summit the “Shark Fin” via a steep exposed class 4 climb up the east face. There is a class 3 route up the “Shark Fin” but if you want to run the ridge, you will need to negotiate deep, exposed notches, most requiring class 3 and 4 climbing.

I have provided some photos of “Twin Eagles” to SP and will promote this crag to a few of my climbing acquaintances with the idea that my exploration may provide a unforgettable LCW memory for a few skilled climbers.

From Denver Colorado travel Hwy 285 past Aspen Park, Conifer, Pine Junction and Bailey. Continue to Kenosha Pass where you will find the Kenosha Pass campground. This is a very popular campground on the weekends, arrive early with $7.00 to reserve a spot. It is only one hour from Denver to Kenosha Pass. Continue to the tiny town of Jefferson and turn left on Park County 77 (Tarryall Road). This road is located directly before Jefferson's only convenient store. Continue 16.9 miles on the rough paved road to Tarryall Reservoir, it may have water it might not. Pass the Ute Creek Trailhead (8,760 ft.) 3.3 miles beyond Tarryall Reservoir on PCR-77. Continue another 4.7 miles to the Spruce Grove Campground turnoff. There is plenty of parking. There is also camping at this trailhead, I believe it is $7.00 a night. It shouldn't take more than two hours to get to this TH. I made it in an hour and a half.

This trail provides access for the Hankins Pass Trail, which continues on to Lake Park at 10,000 ft. Several extended loops can be done from this point.

There is camping at the Twin Eagles TH, and Spruce Grove TH. Camping is $7.00 a night.

Car camping is easy in the Lost Park area. Closest lodging would be Fairplay, Colorado. I wouldn't bother with lodging; you're too close to Denver. Camping at the TH would be a much better alternative.

From Denver Colorado, travel Hwy 285 past Aspen Park, Conifer, Pine Junction and Bailey. Continue to Kenosha Pass where you will find the Kenosha Pass Campground. It is only one hour from Denver to Kenosha Pass. Continue to the tiny town of Jefferson and turn left on Park County 77 (Tarryall Road). This road is located directly before Jefferson's only convenient store. Continue 16.9 miles on the convenient paved road to Tarryall Reservoir. Continue passed the Ute Creek Trailhead at 3.3 miles beyond Tarryall Reservoir. Continue another 3 mile to the signed "Twin Eagles TH" turnoff. There is plenty of parking. It shouldn't take more than two hours to get to this TH.


Current forecast for the Tarryall Massif