Unnamed 11,611 feet is nicknamed "Tater Top" because it has a potato shaped rock atop its summit, and because it resides at the top of Potato Gulch. It is a ranked summit along the Tarryall Range crest, generally south of Topaz Mountain and North of Bison Peak. Tater Top is the Nineteenth highest peak in the Retirement Range.

Hikers on Tater Top will surely find solitude. The Lost Creek Wilderness is a very pristine area to begin with, and Tater Top is additionally off the beaten path. The road to the trailhead is actually grown over with grass! Tater Top will require you to bushwhack up a steep slope to an exposed summit block with expansive views of most of the Lost Creek area and also several other Colorado mountain ranges. Sick of the crowds? Try Tater Top. Unlike the long approaches and high mileages of other Lost Creek hikes, Tater Top is a short, off trail bushwhack. It is ideal for a spur-of-the-moment trip, or a quick hike at the end of a long Lost Creek day. 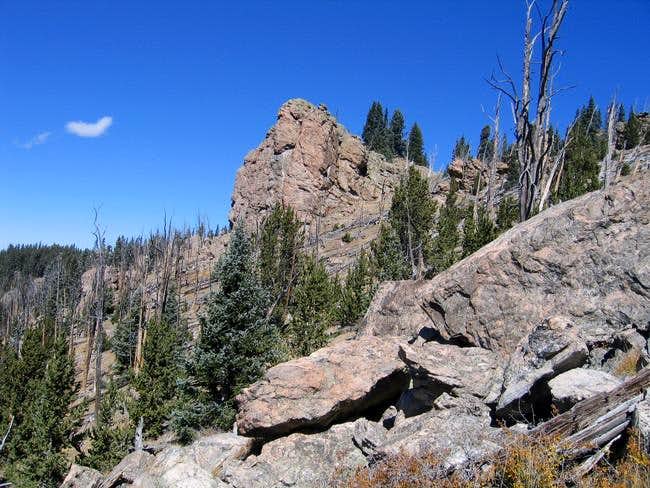 The summit block of Tater Top from the South.

The Lost Creek Wilderness and the Retirement Range

Designated as a Wilderness Area in 1980, the Lost Creek Wilderness in the heart of Colorado is an amazing area. Comprising parts of 4 mountain ranges (see below), the wilderness has about 120,000 acres. It has over 100 miles of trails, and ranges in elevation from 8,000 feet to 12,400 feet. Lost Creek features box canyons, arches, spires, mountain summits, open spaces, creeks, animals of all types, and splendid and singular scenery. A short section of the Colorado Trail passes through here. The Lost Creek Wilderness is contained entirely within the Pike National Forest.

The Lost Creek Wilderness is named for Lost Creek. Lost Creek is so named because it often loses itself no less than 9 times as it passes through rocky sections, only to reappear later in a different spot. Lost Creek eventually joins Goose Creek, which empties into the South Platte River. This system forms a watershed for the South Platte.

The Lost Creek Wilderness is much less seldom traveled than other wilderness areas in Colorado. It's tough to find information on it, and people seeking high mountain summits quickly overlook its lower elevation peaks. Those who ignore this area are truly missing a singular experience. The terrain in Lost Creek has a character different from any other in Colorado. The types of rock spires and formations you will witness here will astound you. You may spend days of hiking here without seeing another soul. Access is great year-round.

The "Retirement Range" is comprised of four separate mountain ranges, mostly contained within the Lost Creek Wilderness. The mountains that are not technically within the Lost Creek still have the same character as those within. These foothills are generally between the high country around Pikes Peak and the mass of the Tenmile/Mosquito. The Retirement Range's four ranges are The Platte River Mountains, the Tarryall Mountains, the Kenosha Mountains, and the Puma Hills.

These two unnamed and unranked summits are along the same high ridge as Tater Top. They are both a quick side trip while on an outing to the summit of Tater Top. The route to the top of both will be addressed on the route page for Tater Top.

Both of these Points have similar summits to Tater Top, and the summit area of Pt. 11, 515 actually is a little more interesting, with more free standing spires. You will surely be glad you spent the time to check out these two unnamed points. 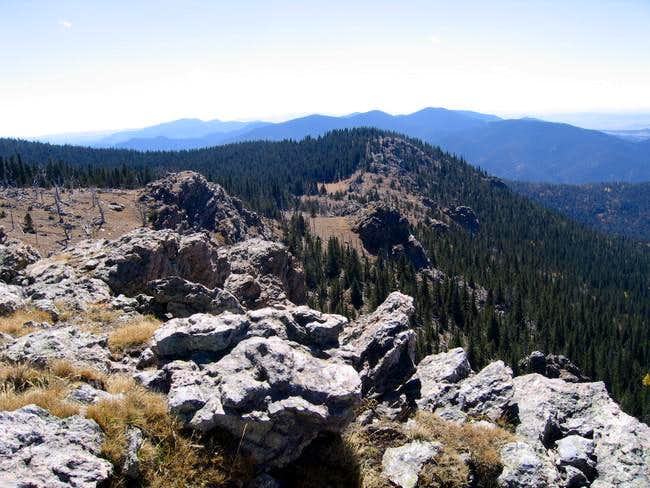 From the town of Jefferson on US285 to the North, or Lake George on US24 to the South, turn onto Park County 77, also called the Tarryall Road.

From the intersection, proceed 1.1 miles on FS142 until it ends at a dead end. As you travel FS142A, there are several secondary roads that branch off of it. If you stay straight, and stay right at the first branch, left at the second, and right at the third, you should be fine. FS142A always appears more traveled than the branching roads, so if you stay on the most traveled road, you should be fine.

Notes on FS142 and FS142A
These roads are both rarely traveled and rough. 4 Wheel Drive is not necessary, but a higher clearance vehicle is. The road gets rougher as you approach the trailhead. A passenger car could make it past the second gate, but maybe not much past there.

The biggest obstacle is a high center between the tire ruts on the road. This gets worse once you pass the intersection of FS142 and FS142A. There aren't many large rocks. The road gets much worse if wet.

Any SUV will be fine. A higher clearance car such as a Subaru Outback might be fine if driven carefully. I never engaged 4WD, like I said, it's a clearance issue.

The only red tape here is crossing the private property on the way to the trailhead. Just drive through and stay on the road.

Tater Top can be conceivably climbed all year round. Winter in the Lost Creek is drier and warmer than other Colorado mountain areas, allowing access at times other ranges are socked in. The trailhead will not be accessible when snowed in.

Camping is permitted at the trailhead, and at several other places nearby. Respect the private property you cross enroute to the trailhead. 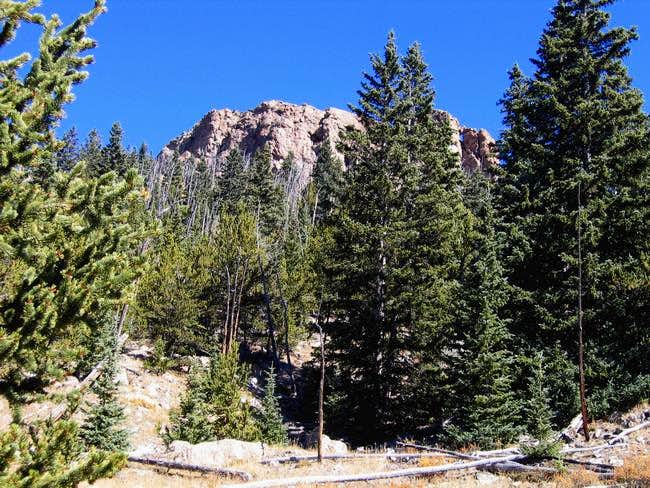 The summit block of Tater Top after exiting the thick forest. The summit is 600 feet above.