Please refer to the individual mountain pages (on left) for Getting There, Red Tape, Conditions, Camping and more photos from other great photographers.

The Lost Creek Wilderness Area protects nearly 120,000 acres in the Tarryall, Platte River and Kenosha mountain ranges in central Colorado. This relatively new wilderness (designated in 1980) is loaded with hiking, backpacking and climbing possibilities. Typical LCW landscape will consist of mixed and very dense forests, open meadows, and small streams. Upon first sight, it’s possible the casual climber or mountaineer may not be too impressed with the typical LCW mountain configuration. Dense, tree- laden slopes that frequently lead to tree-covered summits could easily rekindle a forgotten bad memory, a memory that includes your most frightening bushwhacking experience. 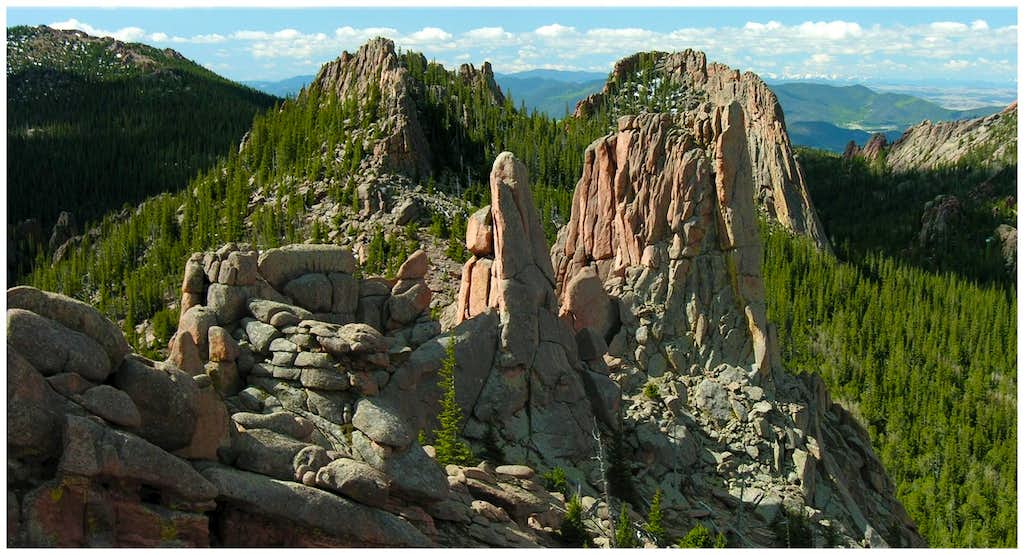 Despite lacking the high alpine scenery of other Colorado wilderness areas, one can argue that LCW is one of the most unique wilderness areas in Colorado. The Lost Creek Wilderness certainly has its own unique character that no other place in Colorado can match. Character that includes some of the most bizarre rock formations Colorado can offer. The heart of the LCW scenery is dominated by twisted rock, which includes massive granite domes and towering granite spires. The highest mountains even sport huge, wide-open plateaus providing easy hiking and excellent views. Getting to those plateaus is another story.

When you combine an arid climate with low elevations, you get hot summers, and the LCW has a reputation for staying hot from June through September. Any snow pack typically melts off fast, occasionally as early as March or April. With the arid climate, expect mild temperatures during the spring and winter, which provides an easy escape from the bitter cold of Colorado’s' alpine environment. When the high summits of Colorado are draped in snow, the Lost Creek Wilderness will welcome you with open arms.

The LCW has an extensive trail system and is known for long approaches. The best solitude and views require a 4-6 mile approach on good trails. Be assured, you will be rewarded with excellent scenery and solitude for the hard work. Hikers beware; the LCW can really put the hurt on someone who ventures too far off the beaten path. These forests are loaded with downfall so the bushwhacking can be gruesome, to say the least.
The last place you want to be is stuck in the dense tree cover without a GPS read. It’s easy to lose your sense of direction in these trees, so the potential for a navigational nightmare is real.

I call them “the big four.” If you spend anytime in the LCW, you need to spend your time attaining the summits of the big four. These peaks include Bison Peak, McCurdy Mountain, Windy Peak and Peak X. I would attempt them in that order as well. All four have expansive plateaus and offer huge scenery that will represent the area well. Next, get your tail up into McCurdy Park and Lake Park and visit the “Catamount” and “Tarryall Peak.”

The LCW also provides some worthy technical climbing, you just have to go and find it. McCurdy Park, and the surrounding terrain is the most popular area for a good climb, including the potential for many first ascents.

The Kenosha Mountains are one of three ranges that border the east side of South Park. Sandwiched in between the Platte River Mountains and the Tarryall Mountains, they are contained almost entirely within the confines of the Lost Creek Wilderness. Geographically they begin to the northwest at "Platosha", the informally named pass traversed by the Ben Tyler Trail, and end to the southeast in the vicinity of Wellington Lake. The main summits of the Kenosha Mountains often lack official designations (quotation marks indicate unofficial names) but have been nicknamed by locals or the esteemed Gerry and Jennifer Roach. From northwest to southeast the summits of the Kenosha Mountains are: "Kenosha Peak" (12,100 ft), "X Prime" (12,100ft), "Peak X", a.k.a "Knobby Crest" (highpoint of the range at 12,429 ft), "Peak Y" (12,274 ft), "Peak Z" (12,244 ft), "Zephyr Peak" (12,067 ft), "Eurus Plateau" (a.k.a. Unnamed 11,936), Unnamed 11,731, Windy Peak, Buffalo Peak, and The Castle.

The summits themselves are in the mid to low twelve-thousand foot range, and generally consist of steep aspen draped lower slopes that even out to beveled summit plateaus; with many rock outcrops studding the slopes both below and above timberline. The rocks are not as abundant as in the Tarryall Mountains, being more subtle in their appearances, in contrast to the almost decadent profusion found around Bison Peak and McCurdy Mountain. This is not to say that they lack charm; the rounded knobs, abrupt buttresses, walls, and towers found on several of the Kenosha’s stand in proud counterpoint to the terrain found in the Tarryalls. There are even a couple natural "eyeholes" in rocks around several of the summits. Truly the Kenosha Mountains represent the other half of the intimate mountain experience found within the Lost Creek Wilderness.

The appeal of the Kenoshas is closely interwoven with the unique aesthetics of the region. They cannot compete with the glacial grandeur of the Indian Peaks or the colorful volcanics of the San Juans. But they can offer a serene mountain experience in a setting that is different from that found amongst so many of Colorado's mountains. Their extensive aspen groves and knobby rocks are worth a visit. The easy access and lower elevations make them a wonderful year-round playground. The close proximity of the summits in the section of the main range crest allows for the opportunity of multi-summit excursions... including the possibility of traversing all six summits in this section in one day.

The following Overview map is interactive. You will need highspeed internet to utilize this feature; it may take a few seconds to download. Just click on the area you are interested in and enjoy. Once opened, the thumbnails are set up to expand to show level 5 TOPO detail. Expand the image by clicking on the "Expand to regular size" (original size)icon on the bottom right of the image.