Mount Leidy Highlands and the Tetons

East of Jackson Hole, north of the Gros Ventre Range, south of the Absaroka Range and west of the Northern Winds, there is a vast (550 square miles) de facto wilderness of forested mountains, rolling hills, badlands-type formations, sprawling meadows, sagebrush flats, and wild rivers known as the Mount Leidy Highlands. In some ways, I think of this area as the “real” Wyoming, for it is a snapshot of what so much of what Wyoming is-- big, open, and empty (of people).

Known to but a few who are not Jackson-area residents, the Mount Leidy Highlands provide important wildlife habitat and serve as a transitional zone between the high mountain ranges that effectively wall it in. The area is a mix of federal, state, and private land-- none of it protected with official wilderness designation-- and although it is not pristine in the same sense that the interior of a national park or federally designated wilderness area is (it has, for example, an extensive network of dirt and gravel roads), it is so big and open that opportunities for wilderness recreation abound. There is little good rock climbing to be found in the Mount Leidy Highlands, but hikers, scramblers, river runners, anglers, and hunters all can find more than enough out here to occupy their time and interests.

The scenery is not spectacular the way it is in Grand Teton and Yellowstone National Parks, but the country out here is striking in a quieter, gentler fashion, and it is still remarkably diverse and beautiful. The Mount Leidy Highlands are not a place to be swept away by the grandeur of soaring mountains but rather a place to wander and discover that the majesty of nature is found in more than just the postcard places. 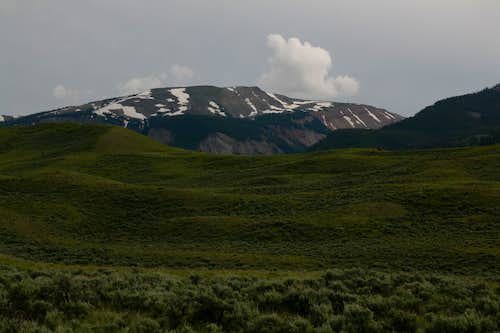 Sagebrush flats and hills and the Gros Ventre Range

Where To Go and How To Get There

Because the area is so sprawling and the roads so many, it would be too hard to give a comprehensive listing of access points. Instead, I will focus on two primary ones.

Established hiking trails exist, but you will find little published information on most of them. I recommend obtaining a Forest Service map or getting the DeLorme Wyoming Gazetteer.

The area also lends itself well to cross-country travel because so much of it is so open.

About eight miles east of Moran Junction along U.S. 26/287, the Blackrock Ranger Station is on the south side of the road. Just before (west of) the station are a dirt road and a sign for Hatchet Campground (a Forest Service campground). A short distance from the turnoff but not obvious from the main road is a board indicating driving distances to various locations. This road is a gateway for places such as Mount Leidy, Leidy Lake, Lily Lake, and Skull Creek Meadow. 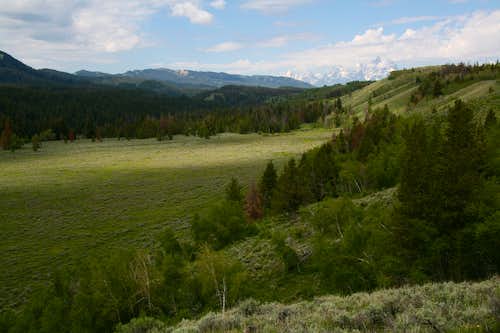 Running east from Jackson Hole in Grand Teton National Park, the Gros Ventre Road follows the Gros Ventre River deep into some of Wyoming's best scenery. The country this road accesses feels big and remote, and even though it's not far from one of the most popular national parks in the United States, it does not take long to get the sense, even when you're just on the road, that you have left the busy world far behind.

The road winds some 40+ miles through mostly open terrain and yields views of colorful eroded hills, different faces of the Gros Ventre River and its tributaries, and the wild, relatively unknown Gros Ventre Range. Some maps mark this as an unpaved road, but it is paved, though not very well, for a few miles. I can verify from personal experience that the road is easily passable to passenger vehicles for at least 22 miles but that many of the side roads, including Crystal Creek Road, which accesses a trailhead for the Gros Ventre Wilderness, require four-wheel drive and high clearance.

Some Highlights: The first highlight is probably Slide Lake, which comes into view after around six miles. A landslide (the site of the slide is clearly visible from the road) effectively dammed the Gros Ventre River here, causing it to widen to the point of being a lake.

Miles 9-12 take you past the Red Hills, a colorful area of hills and buttes that truly lives up to its name. 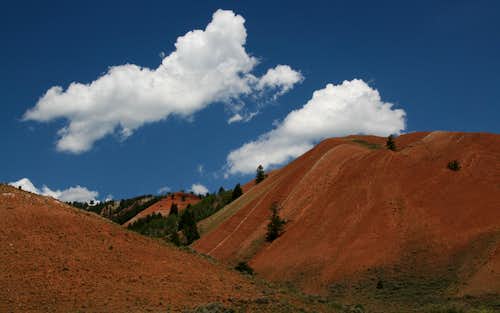 The Red Hills
The Red Hills give way to the Lavender Hills and then the Gray Hills; the latter seem like some kind of cross between badlands and rolling hills.

The Gray Hills begin to dominate the scenery north of the road after the bridged crossing of the Gros Ventre River just beyond the Red Hills and Crystal Creek Campgrounds (about 11 miles in). To the south, the Gros Ventre Range looms above sagebrush-covered flats and hills, and you pass the junction with Crystal Creek Road at about 13 miles. 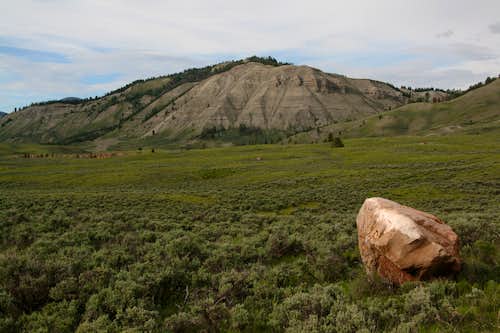 The Gray Hills
Upper Slide Lake is about 22 miles in, and it seems more like a wide meander of the Gros Ventre River than an actual lake.

Beyond Upper Slide Lake, the area is unknown to me. 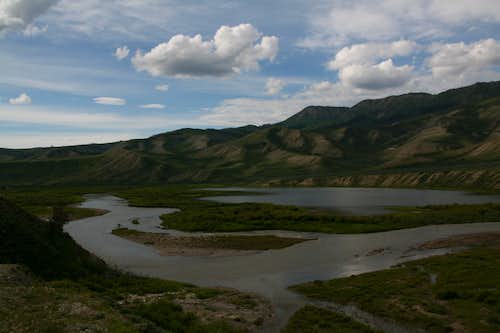 Upper Slide Lake
Here is an interesting site that gives more information about fishing and kayaking on the Gros Ventre River.

Access from the North: Turn left (east) from U.S. 26/89/187 through Grand Teton National Park onto a paved road (Antelope Flats Road) that is just past the Blacktail Ponds Overlook. If you reach Moose Junction, you have gone too far. Drive about 5 miles to an intersection with another narrow paved road and turn right. At the intersection, there should be a sign indicating that one turns right to reach Kelly. After 2-3 miles of driving south, turn left onto the Gros Ventre Road. If you reach the small community of Kelly or the Gros Ventre Campground even further, you have gone too far and have to turn around.

Access from the south: From Jackson, take U.S. 26/89/187 through Grand Teton National Park north to Gros Ventre Junction, where you turn right onto a paved road leading to Kelly. At the turnoff to Kelly, the road turns sharply left (north) and reaches the Gros Ventre Road in about 2 miles. Turn right onto that road.

There are no fees or permits required. Obey posted signs for private property. This is bear country (both black and grizzly), so know and follow the protocol for visiting bear country.

At Blackrock Ranger Station, there is Hatchet Campground. Along the Gros Ventre Road, you can stay at Atherton Creek, Red Hills, or Crystal Creek Campground. These sites charge $10 a night (that is as of July 2009), they have running water and pit toilets, and they have first-come, first-served sites only.

Dispersed camping is widely available unless expressly prohibited in a specific location. Follow regulations about fires and food storage.

Backcountry camping is free, and no permits are necessary.

Bridger-Teton National Forest-- the northern end of the area is in the Buffalo Ranger District; the rest is in the Jackson Ranger District. Keep that in mind when deciding which contact numbers to use.