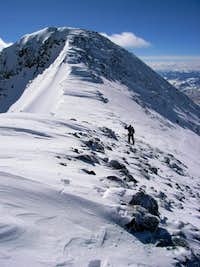 Summit of Emigrant Peak-- photo by b.

Most people who see the Montana Absarokas in any good detail see them from Paradise Valley between Livingston and Gardiner as they drive on U.S. 89 to or from the north entrance of Yellowstone National Park. The mountains are as dramatic as they are unforgettable. For me, they will always hold a special place because they were both my first glimpse of Montana (a fitting first glimpse, back in 1997) and where, in 2000, the mountaineer in me truly came into being.

Much like the Tetons above Jackson Hole and the Sierra above Owens Valley, the Montana Absarokas rise dramatically from the valley, in this case 5000-6000' up, with little in the way of substantial foothills between the valley and the mountaintops. Unless they are fortunate enough to be in convertibles with the tops down, drivers crane their necks and passengers hang their heads out windows to get a look at these spectacular peaks. But while the mountains are quite popular with people who live in the area, visitors mostly just admire them from the highway, drawn instead by the nearby national park and all of the easily attainable wonders that are there. As a result, the Montana Absarokas contain outstanding mountaineering opportunities that, with a couple of notable exceptions, do not include human company in the price.

Many named peaks have Class 3 and 4 routes as standard ones to their summits, though there are both walk-ups and technical routes as well, and there is no shortage of unnamed summits that will lend a sense of discovery to those that explore them. The range's highpoint, Mount Cowen, is one of the iconic peaks of Greater Yellowstone even though it is difficult to see from roads, and the standard route on it is one of the region's classic scrambles. All over, though, snow climbs and ski descents abound, ridge traverses and mountain walls tantalize, and there is even good ice in season. Most of the range is protected as part of the vast Absaroka-Beartooth Wilderness, but private property does sometimes impact access, especially on the western side of the range. 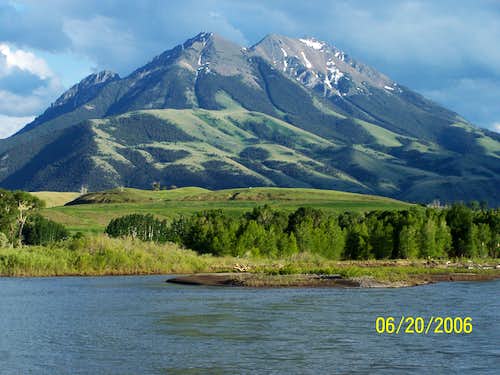 Mount Cowen-- by tristan mt
The Absaroka Range is a massive one, long and broad, and the largest of Greater Yellowstone's ranges. Official USGS topographic maps do not differentiate among sections of the range, but people have long subdivided it for organizational and geological reasons. The western, northern, and eastern boundaries of the Montana Absarokas are easily defined. Respectively, they are Paradise Valley between this range and the Gallatins, the plains and rolling hills around I-90 between Livingston and Big Timber, and the Boulder River. Or better put in geographical terms: the Yellowstone River and Boulder River define all but the southern edges of the range. The southern boundary is a little more nebulous, but it is somewhere among the deep drainages near the northern boundary of Yellowstone National Park. 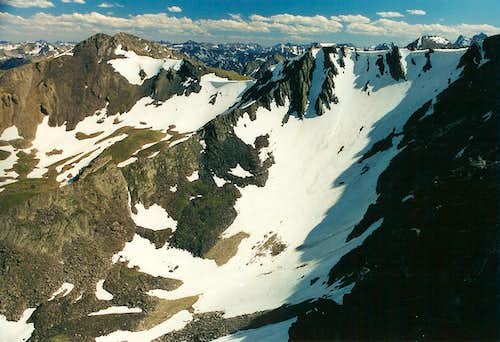 An ocean of mountains 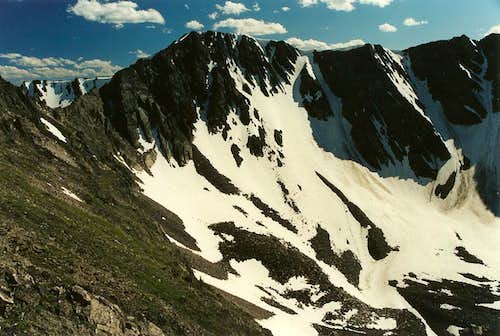 Ridges above Pine Creek Lake
There is some confusion and debate about the identity of these mountains. Maps place them in the Absaroka Range, but if that's correct, then why, one might ask, does Wyoming have the North Absaroka Wilderness and the Northern Absaroka Mountains? Some answers: the name for the wilderness area refers to the northern section of the Absaroka Range in Wyoming, the name Northern Absaroka Mountains is not an official one, and the Montana Absarokas seem a little different from the Wyoming ones-- although both ranges consist primarily of volcanic rock, the Wyoming range tends to have broad peaks, volcanic spires, alpine plateaus, sheer cliffs, and deep, wide drainages, whereas the Montana peaks are often more "classically alpine" in form and character (for example, they contain many alpine cirques and lakes, which are relatively rare in the Wyoming Absarokas). This distinction is by no means uniform, but it is generally so.
The confusion about the proper name is not just recent; Ferdinand Hayden referred to the range as the Snowy Mountains, Snow Mountains, and later the Yellowstone Range, and many locals have long thought of these mountains as the North Absarokas while many others have called them the Montana Absarokas.
In his Select Peaks of Greater Yellowstone, one of the best sources for information about the natural and human history of the Greater Yellowstone Ecosystem, Thomas Turiano makes the case that the Montana Absarokas should not be considered part of the Absaroka Range at all but should rather be called the Western Beartooth Mountains, with the peaks commonly called the Beartooth Range being the Eastern Beartooth Mountains.
Many years of using the commonly accepted nomenclature probably will make Turiano's argument a losing one, but he makes an interesting case nonetheless. Since his book is my only source for this position, I would be flirting with plagiarism if I got into too much detail, so I will simply summarize two of his main points as follows:
1. The rock, although a lot of it is volcanic, is closer in composition and history to that in the Beartooths than it is to that in the Wyoming Absarokas. There is, for example, far more exposed granite in the Montana Absarokas than there is in the Wyoming Absarokas (where there is little), and the Beartooths are granitic. This, obviously, explains the notion of calling the range the Western Beartooth Mountains.
2. The drainages of Boulder River and Slough Creek are significant enough to divide the ranges into eastern and western halves, hence the idea of naming two different Beartooth ranges.
Reading Turiano's chapter on the Western Beartooths will provide far more details than I can or will provide here. My view, which I'm sure the world desperately craves to know, is that the best name for the range is the "Montana Absarokas" since it keeps with tradition and also creates the least confusion. 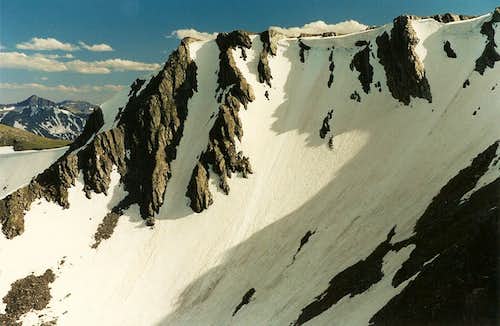 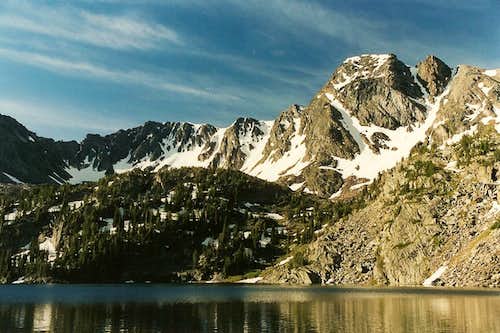 The classic view of Black Mountain from Pine Creek Lake 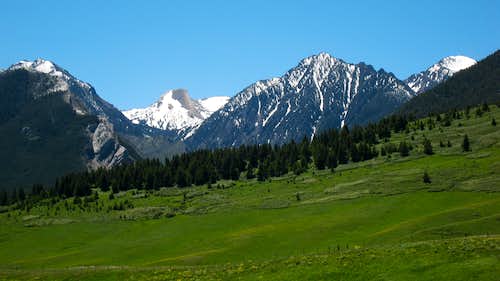 Elephanthead Mountain-- by wyomtman
In no way should anybody consider this an exhaustive list of popular destinations or even of the best ones. These destinations are, however, great ways to get to know the range, and they open doors to better things. 1. Elephanthead Mountain-- This peak, not high compared to most of the rest of the range, is a Class 1 hike at the northern end of the range and is supposed to have excellent views. Because of its "low" elevation, it is also a good early-season peak. 2. Pine Creek Lake-- Although this location is no wilderness secret, the hiking distance (5 miles) and elevation gain (over 3000') keep away anything amounting to true crowds. And the scenery is unbeatable, for the lake is situated at timberline in a beautiful cirque. The lake rests in the shadow of Black Mountain, and another named peak, Mount McKnight, is not far away. Between those two peaks is an awesome (and perhaps technical) ridge traverse (I have done part of it, and there is a deep notch along the traverse that may present Class 5 conditions). 3. Elbow Lake-- It is about 10 strenuous miles to this lake, which is the start of the standard route up Mount Cowen. 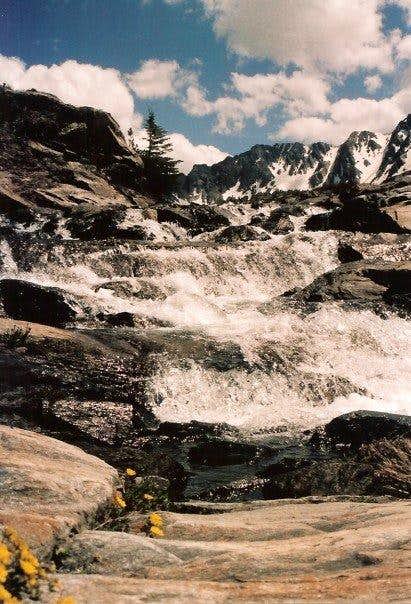 There are several Forest Service campgrounds along or near 89 and Boulder River Road. Visit the website for Gallatin National Forest for more information about campgrounds. I am not aware of any fees other than those charged for use of developed campgrounds, and backcountry permits are not required. Respect private property. Although this range is not as thick with grizzlies as other parts of the Absaroka Range are, it is still grizzly habitat (and habitat for black bears as well), so know proper behavior and food storage.