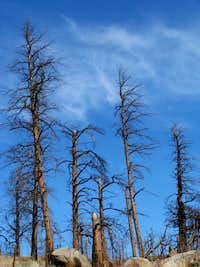 The Cheesman Mountain massif is by far not the most challenging mountain, until you get to the final summit boulder.  Summitting that requires either thin 5.9 face climbing on mossy rock, or aiding up an old #9 wire "ladder" which is attached to who knows what.  The summit area does offer a spectacular vista to to see how 60,000 acres of burnt forest look from above.  As an added bonus during the right time of year, it is absolutely littered with raspberries.

Notes: Benchmark elevation 7,933' is below summit block. Block is estimated 15' higher. Elevation is interpolation of 7,933 and next highest contour.

History of the Hayman fire

On June 08, 2002 a national forest employee (in charge of preventing forest fires) burnt a love rejection letter in a fire ring and did not extinguish the fire...which turned into the largest (in size, not of destructive cost) forest fire in the history of Colorado - affecting 138,000+ acres in total and 133 houses to ashes. It will take centuries until this ghostly landscape is covered again by a mature forest .
Hayman Fire on Wikipedia

But who was Walter Cheesman?

Walter Cheesman was unquestionably a visionary.  He started as a druggist, and later became the champion of the Denver Union Water Company, which after a few iterations has become Denver Water.  Several other structures and features are named after him:  Cheesman Reservoir (seen from the summit), Cheesman Canyon, and in Denver, Cheesman Park and Cheesman Pavillion.   Some have questioned his capitalist nature, others have lauded his philanthropy.

From Denver, Travel South on US 285 - west bound (Hampden Av. within city limits) to the small town of Pine Junction.

Turn south on County Road 126, pass through Pine and Buffalo Creek, a distance of almost 22 miles.

Turn right into the parking lot for the Upper Cheesman Canyon Trail when you reach the valley bottom of Wigwam Creek (right before crossing the creek).

Drive on a couple more yards and turn to your right on Forest Road 211 (3 miles before Deckers)- look for the sign to Cheesman Reservoir.

The unpaved Forest Road is very narrow and windy on its first 2 miles, you will drive constantly along drop offs.

After two miles you reach a junction (marked by several oversized post boxes).

You might be able to squeeze in a car along the road right before the junction, otherwise proceed in direction of Cheesman Reservoir (to your left), where you find two parking lots. 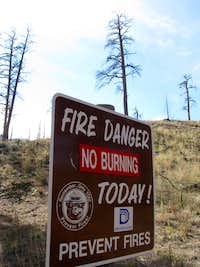 The mountain, but perhaps not the summit boulder, can be climbed year round.

Lots of dead trees around you - sooner or later they will all fall - avoid windy days.

Not much shade and no water on the mountain - definitely a hot hike in the summer.

Plenty of gooseberries and raspberries (thorny plants). Edible, but they make you pay for it.
It is possible for rattlesnakes, bears, and mountain lions to be seen in the area.

The dirt road to Cheesman Reservoir is maintained in the winter as it is the only access road to the reservoir.  It is very steep and windy - be prepared for icy and slippery road conditions - you don't want to slide off the road, would be a pretty deep fall. 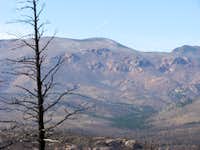 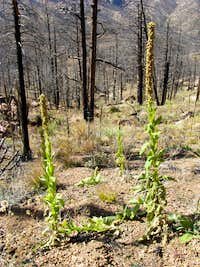 No camping allowed at Cheesman Reservoir and in the Upper Cheesman Canyon.

Closest Campgrounds are along CR 126:

Kelsey - between Buffalo Creek and FR 211

The campgrounds along FR 211 (Goose Creek and Molly Gulch) are closed because of flashflood danger due to the damage from the forest fires in the area.

Cheesman Mountain is partly on land of the Pike National Forest and partly on land owned by Denver Water - please abide to all rules and regulations, which include keeping your dog on leash, and practicing Leave No Trace principles.