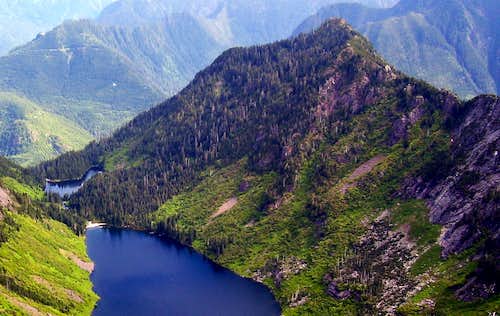 Little Greider Peak from Static Peak. Scramble route starts at the outlet log jam on Big Greider Lake, then follows the obvious forested slope to the summit.
Little Grieder Peak is a 4602' (542' prom.) summit located one mile southeast of the east end of Spada Lake, and one-half mile east of Little Greider Lake. While not a particularly tall peak, it does have a lot going for it. Its rocky summit provides 360-degree views of the surrounding mountains (unusual for a low-elevation peak in Western Washington), as well as a superb view of Spada Lake. The route to the summit is only two-thirds of a mile from an established trail, and can be scrambled in just about any condition, thanks to the safety of tree-covered slopes. There are two nice alpine lakes at the base of the peak, and two other peaks in the immediate vicinity make a '3fer' possible for overnight trips.
Now for the bad news: A couple of years ago, the South Shore Road along Spada Lake was decommissioned at the South Shore boat launch. This necessitates a two mile road walk to the Greider Lakes trailhead, which is aggravated by tank traps and dug up culverts. There is, however, a silver lining: solitude. I have been in this area three times in recent months (weekdays) and have yet to see another person. So, if you're not put off by a little creek jumping and road walking, give Little Greider a try.

From the east end of the town of Sultan (accessed by US2), turn north onto Sultan Basin Road. After 10.25 miles, the pavement will end - drive the gravel portion another three miles to the check-in station (free registration) at Olney Pass. This is required for all visitors, and the watershed patrol is pretty serious about making sure you have your 'yellow copy' in your windshield. After pulling out of the registration kiosk, the road will split in three: the left fork leads down to Culmback Dam (which, by the way, is now open to bikes and pedestrians), the right fork is gated (leads towards the Kromona Mine), and the middle fork leads to the new (but not improved) Greider Lakes Trailhead. The trailhead will be reached in 5.3 miles - be sure to park in the area of the parking lot designated for the Greider Lakes and Boulder Lake trail.
Note: It might be prudent to check online (www.snopud.com) to verify that the gates are open at Olney Pass - they are occasionally closed (usually in the winter with low snow levels). There is also a sign just a few miles up the Sultan Basin Road (at the intersection of Sultan Basin Road and Kellogg Lake Road) that shows the status of the gates at Olney Pass. 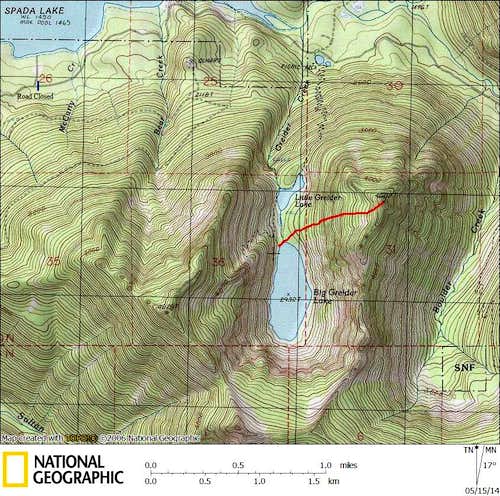 Little Greider Peak route map
Walk the South Shore Road for two miles to the old Greider Lakes trailhead. It is possible to mountain bike this road to save a few minutes, but I would not recommend it unless you are an accomplished rider. Hike the Greider Lakes Trail, which will switchback steeply, and reach Little Greider Lake in just under two miles. The trail is in surprisingly good shape, considering it has been all but abandoned by the state. 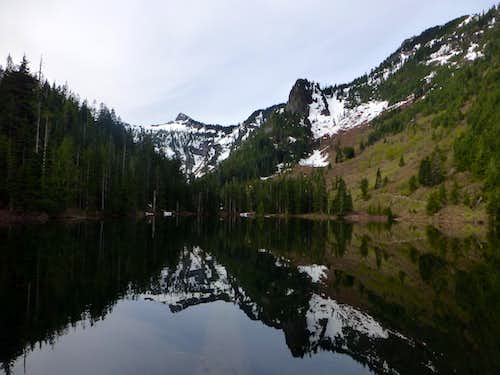 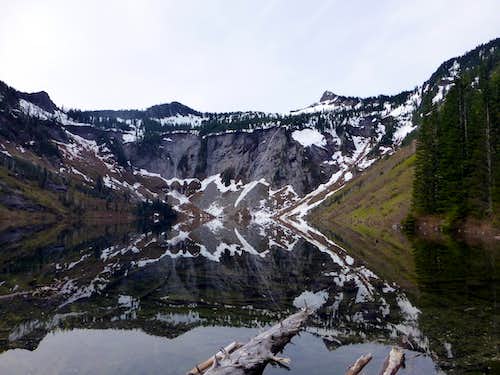 Big Greider Lake and Static Peak
Cross Big Greider Lake's outlet on the log jam, and begin proceeding uphill. It's best to make a very slight traverse to the left, to avoid the slightly steeper terrain. The route will be steepest between 3400' and 3800', but there is plenty of vegetation to hang on to as you battle through this section (mostly class 2, a few moves of class 3). The slope will begin easing up at 3800', and from here, I had continuous snow to the summit (mid-May). I elected to go straight up to the ridge, thinking I would follow the ridge north to the summit. This turned out to be a poor choice, but it did allow me to get a good photo of the summit from the south. 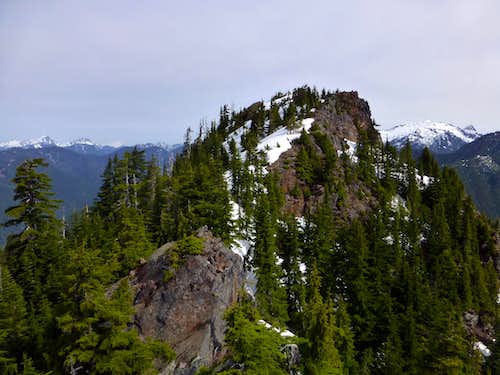 Little Greider Peak summit from the south
Rather than making my mistake, stay about two hundred feet below the ridge crest, and traverse towards the north, until almost directly below the summit. This will help you avoid the steepest terrain. It won't be too terribly steep, but an ice axe is still a good idea for the last several hundred yards to the summit. My time to the summit was about one hour from Big Greider Lake, and about one-half hour coming down. Plan to double these times if you are here in late season, as the brush will undoubtedly add some frustration to your day.
Views from the top of Little Greider Peak are quite good for the modest amount of effort required to reach the top. It's way too early in the year to decide, but Little Greider may be in contention for 2014's 'Underrated Peak of the Year Award'. Sorry about all the pictures - I got a little carried away with the camera... 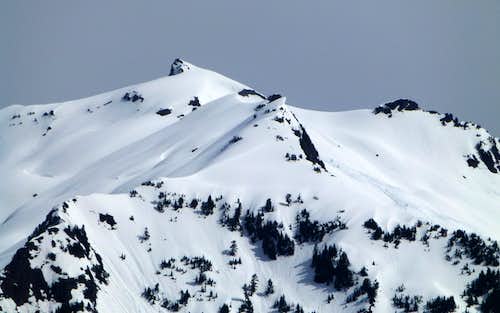 Vesper Peak from Little Greider Peak. Notice the huge cornice, and associated avalanche near the center of photo. 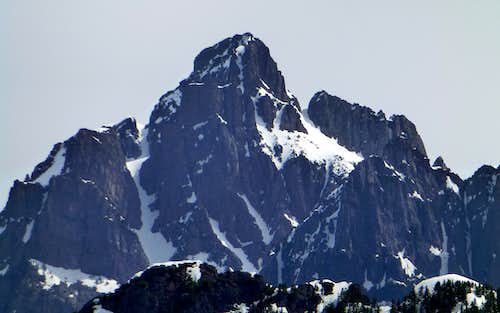 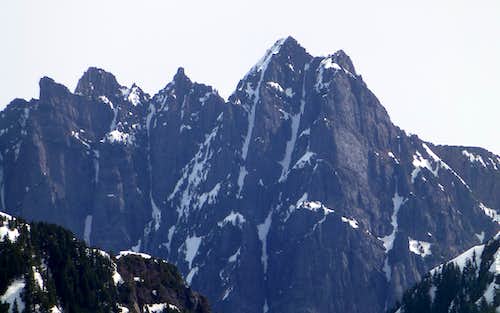 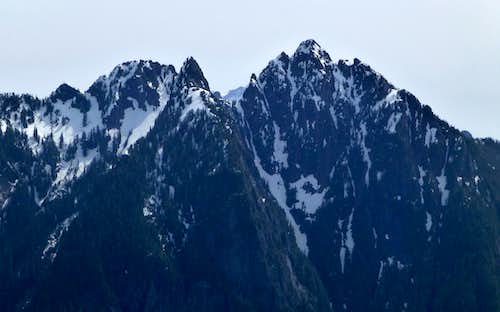 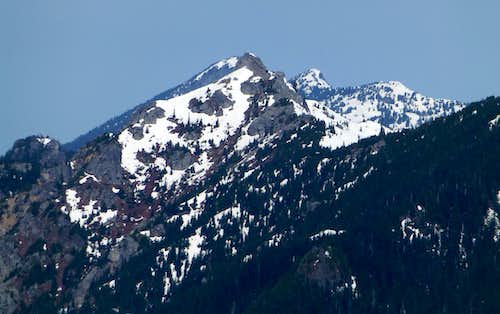 Bald Mountain from Little Greider Peak. Mount Pilchuck summit and lookout can be seen just to the left, Pt. 5198 just to the right. 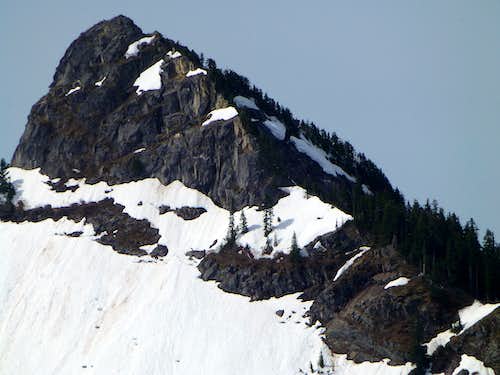 Static Peak from Little Greider Peak. This view shows the scramble route to the summit. 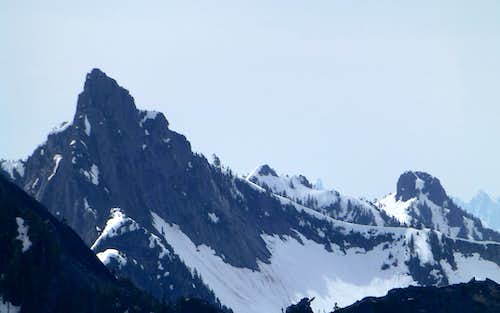 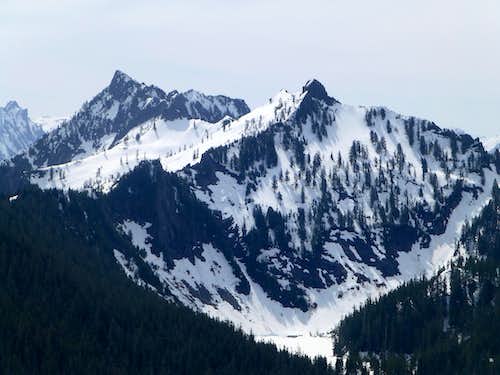 Frostbite Peak and Boulder Lake from Little Greider Peak. Peak on the right is unnamed. The Boulder Lake trailhead is located another 1.2 miles past the Greider Lakes trailhead on the South Shore Road. 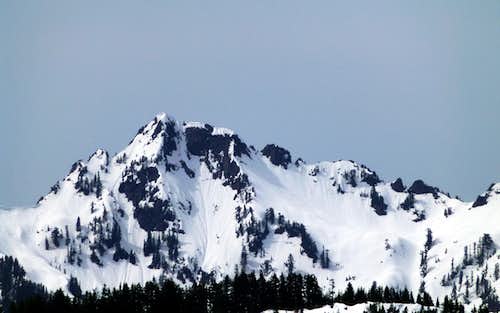 Static Peak and Greider Peak from Little Greider Peak. As is suggested by this photo, it is probably fairly simple to proceed straight up to Greider Peak's summit in early season from the trail between Little Greider Lake and Big Greider Lake. These peaks could easily be combined with Little Greider Peak on the same trip for a '3fer'. The normal couloir for accessing the low saddle between the two peaks can be plainly seen in this photo - getting to its base requires traversing around, or floating across, Big Greider Lake.
Be sure to take a couple minutes to walk a few hundred feet to the false north summit, as it provides the best view of Spada Lake - you also get a little bit of a Greider Lakes view from this point. 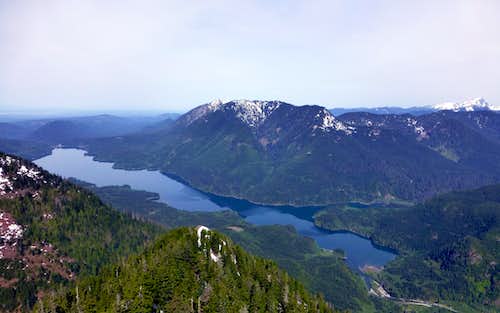 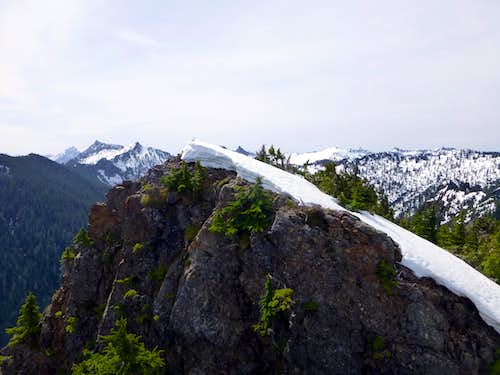 All visitors must register at the kiosk at Olney Pass (free). I don't think a Discovery Pass is required at the South Shore trailhead, but I can not say this with absolute certainty.

This climb would be best in the spring (March to May), but can be safely done anytime the South Shore Road is open (low avalanche danger). Summer scrambles would almost certainly involve some devil's club, slide alder, and blueberry bushes. If you are in this area as part of an overnight trip, I would suggest Little Greider in the morning, and Greider/Static in the evening, to take maximum advantage of the shade.

The best camping would obviously be at Greider Lakes. If the lakes are a little buggy, there is a nice flat spot about a quarter mile before Little Greider Lake (at the top of the trail switchbacks), which looks like it would make a good campsite. The DNR has posted a couple of signs (now quite old) that suggest camping is only allowed between June 15 and October 15. Judging from the abandonment of the old trailhead facilities, I doubt this policy is enforced.