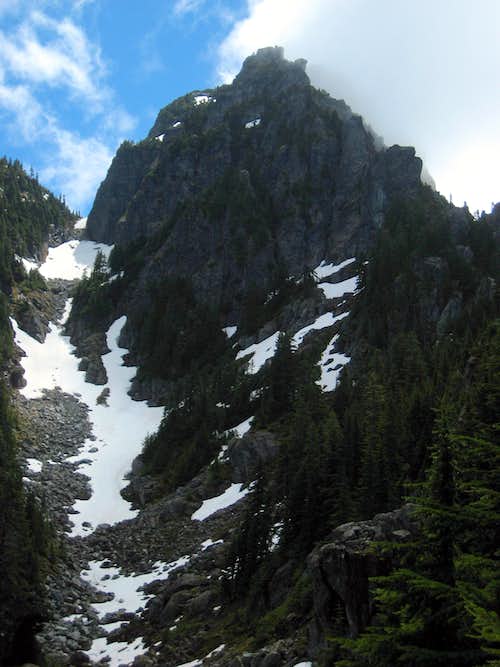 South Baring from the west at 4800'. The obvious 5550' notch is plainly seen on the left side of the photo. The route gully is not visible in this photo, but is just behind the left skyline.

South Baring is a 6010' 'false summit' of Baring Mountain, whose true summit is located just 0.3 miles away. Unlike most false summits, South Baring technically qualifies as its own unique peak with 470' of prominence.

Normally, a false summit such as South Baring would not arouse much interest as a climbing objective. One thing, however, sets this false summit apart from the rest - it officially qualifies as the 11th steepest peak in Washington State. 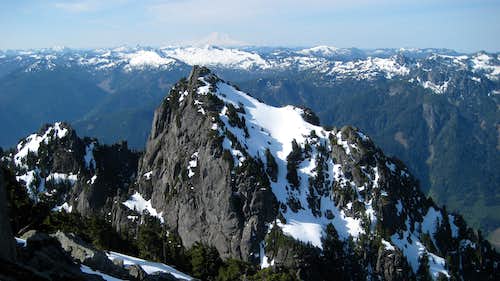 South Baring from North Baring. The upper route, from 5700' to the summit, follows the obvious snow slope. The thin snow finger on bottom center of photo is the top of the gully on the lower portion of the route. Just behind the summit is Lennox Mountain, and in the far distance, Mount Rainier.

Truthfully, with its dirty, brushy, class 3/4 gully, South Baring is not a joy to climb, and is not highly recommended as a stand-alone ascent. For those already in the vicinity for Baring Mountain, however, it makes for a relatively quick '2fer'. In fact, for the handful of climbers who have a 'Washington Steep Peak' fetish, the '2fer' allows you to knock off #3 and #11 at the same time.

Yet another interesting fact that I was just made aware of (6-22-16): North and South Baring are the second closest 400+' clean prominence peaks in Washington State with 1495' separation. First place goes to the Mox Peaks at 1473'. 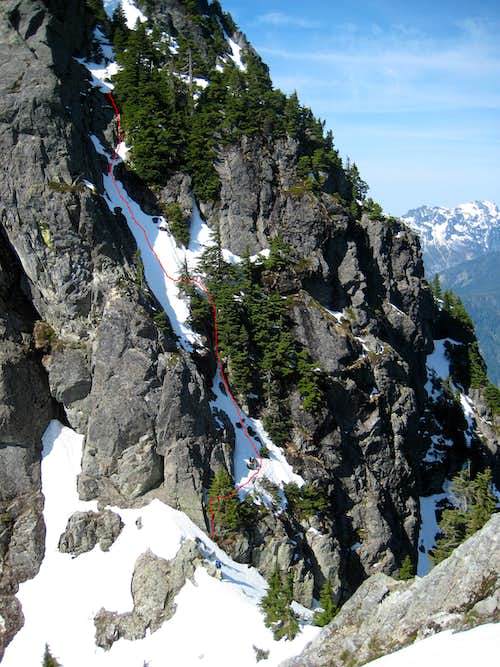 Follow the climber's path as described on the Baring Mountain page. South Baring utilizes the same route until reaching the very obvious notch at 5550'.

Note: Elevations referenced in the route description are approximations only. GPS coverage is very poor when 'wedged' in the notch between North Baring and South Baring. For this reason, it was difficult to get accurate elevations.

Interestingly, the 'crux' move on South Baring is the first move you will make leaving the notch. It involves about eight feet of what would normally be considered 5th class climbing. Don't waste your time setting up a belay - this section does not 'line up' with the main gully, and the exposure is very minimal. As long as you're not too proud to do a little 'aid climbing', a very convenient little tree makes an attractive target for a sling. 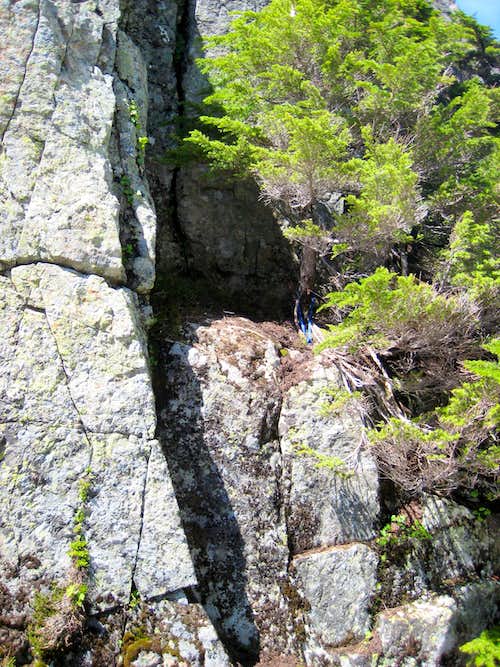 Once you've yarded yourself onto the ledge, make a near-level traverse to the west (climber's right) for about 20'. Now the idea is to head straight up (through the trees) for about 50 vertical feet. It looked tempting to ascend a line to the left of the trees, as it was 'cleaner'. After inspecting the route on rappel, we were glad we didn't.

At roughly 5600', you will arrive at a fairly open ledge, and begin to notice some slings indicative of a belay/rappel station. Traverse east slightly to the more 'open' portion of the gully. The right side of the gully, while having more vegetation, did not look attractive at all between 5600' and 5700'. 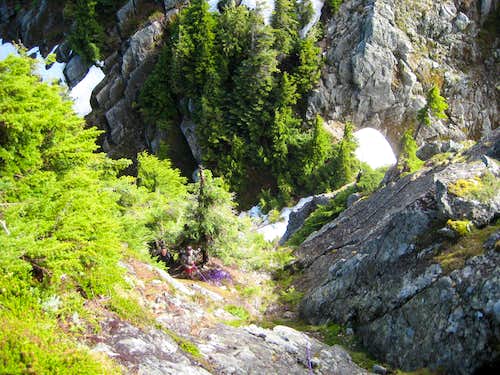 Looking down the gully on South Baring at 5650'. Climbers are standing on the belay/rappel ledge at 5600'.

How you decide to proceed from the ledge will likely depend on how wet the gully is. In dry conditions, most climbers would probably prefer to ascend the gully unroped (mostly class 3 with a few class 4 moves). When things are a little wetter, the moist heather may inspire you (and us) to rope up. Truthfully, there's not a lot of good anchors between 5600' and 5700', but I did manage to get a couple slings around some small shrubs. The couple of small rock horns I found along the way were loose, and not to be trusted.

Note: In early season, expect very steep snow in this gully. An ice axe would be required for obvious reasons. 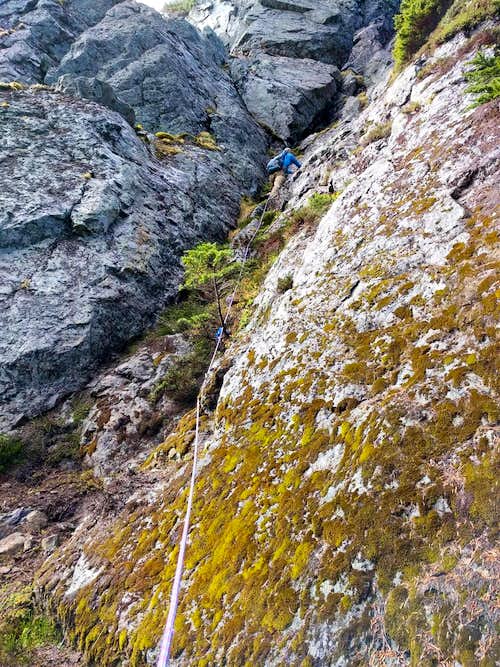 Upon arriving at 5700', the angle will ease considerably, and a number of fine trees will make themselves available for belay or rappel. You may as well cache your rope at this point, as you will not be needing it for the rest of the climb. 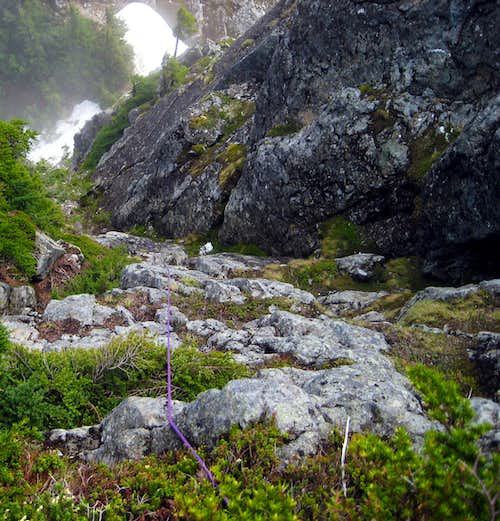 Looking down South Baring route from 5700'

From 5700', scramble up, then right a short distance. After breaking out onto an open slope, turn left, and climb relatively easy terrain south until reaching 5900'. It appears that this slope holds snow until late season, so an ice axe is recommended for spring and early summer ascents. 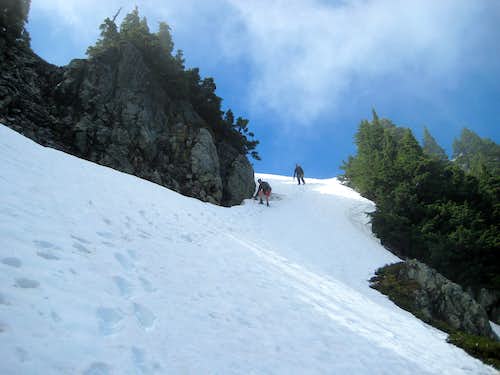 At 5900', the summit of South Baring will come into view. Turn left, and scramble easy class 2 terrain to the summit. Aim for the right high point, as the left high point is a false summit. 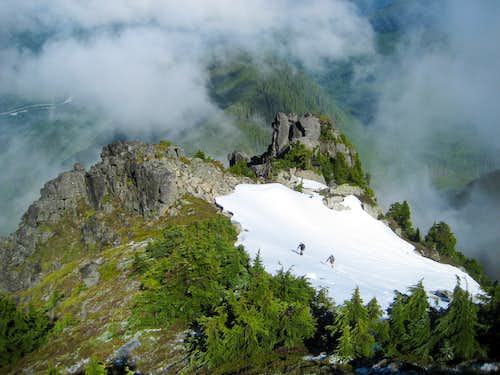 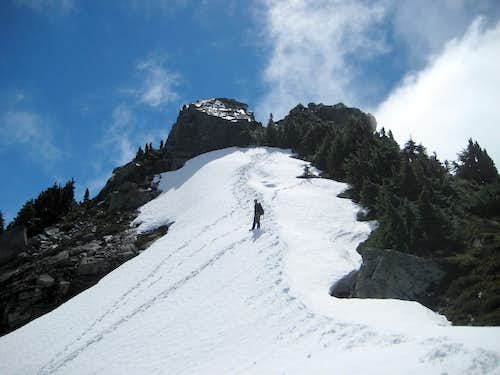 Views from South Baring's summit should be fairly similar to the main summit. Unfortunately, obscuring clouds left us with only peak-a-boo views. 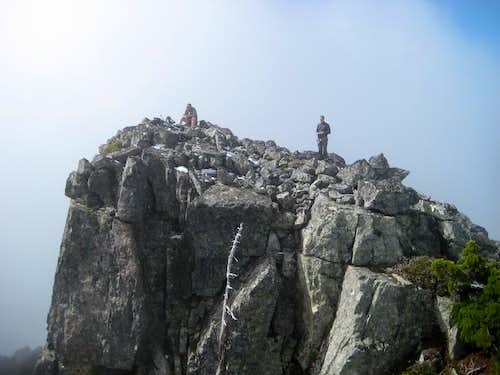 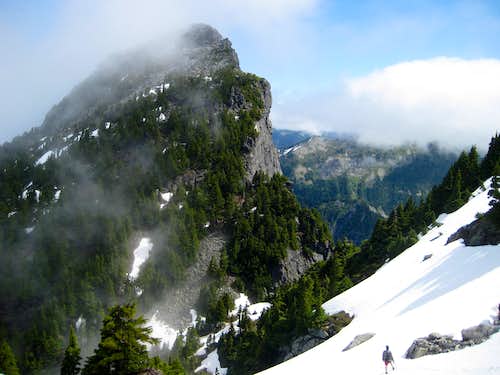 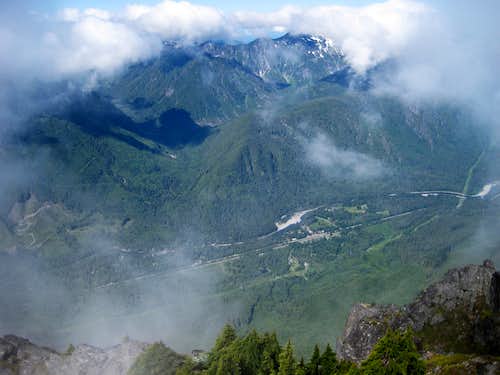 Town of Baring from South Baring 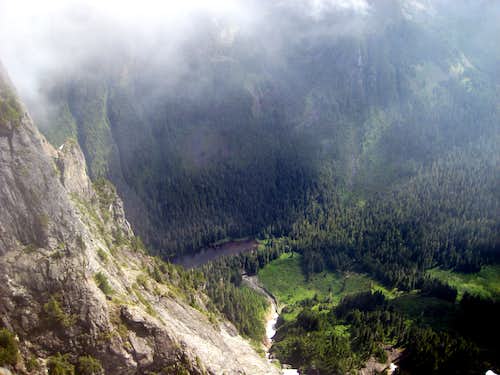 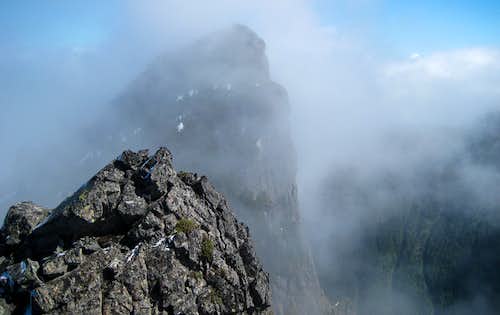 North Baring from South Baring
Descent: Whether you decide to belay the gully or not on the ascent, I would recommend a rappel on the descent. We took along two 150' ropes for our climb, so we were able to make one rappel from the obvious rappel tree at 5700'. If I were to do it all over again, I would have left one of the ropes at home, and split the rappel into two parts. While we did not have any issues, there is just enough junk in the gully to make rope retrieval potentially difficult. 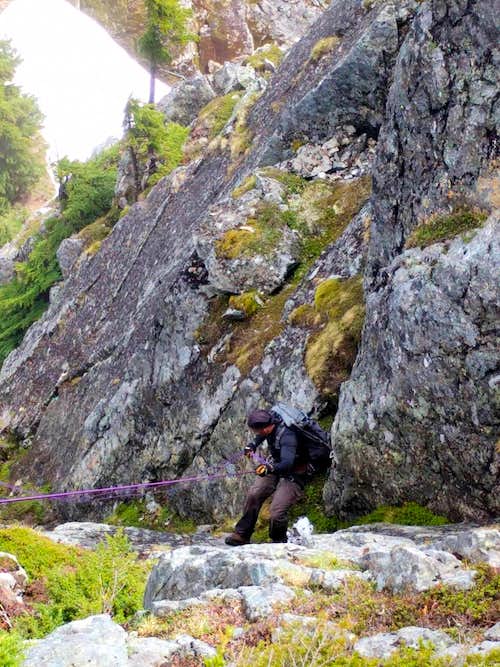 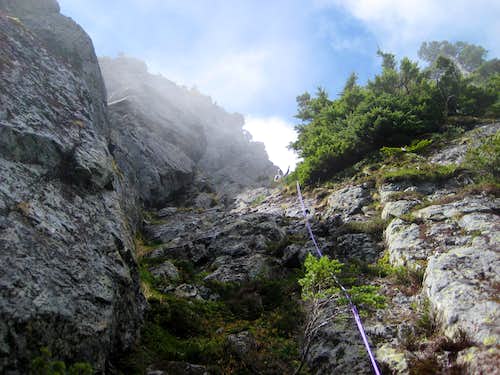 Looking up South Baring route from 5600'

A Northwest Forest Pass is required at the Barclay Lake Trailhead.

The low elevation of the Barclay Lake Trailhead makes Baring Mountain accessible much of the year. I would not attempt South Baring if there was even a hint of avalanche potential. Additionally, any climb of South Baring will be much more enjoyable if the route has had a few days to dry out after the last rain.

There are no campgrounds in the immediate vicinity. One could trailhead camp, or make the easy hike to Barclay Lake. If you would like to camp on the route, there are several spots around the 4800' level of Baring Mountain that would be acceptable for camping.