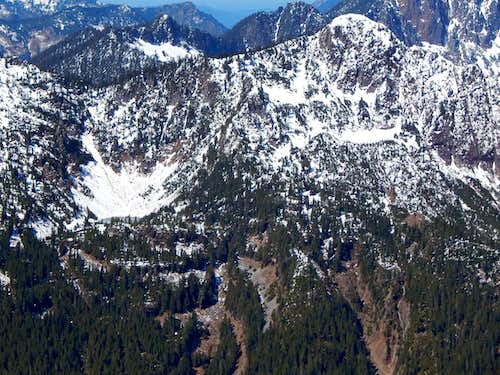 South Crested Butte and Gulch Lakes from Hubbart Peak. Route follows the well-defined ridge just right of center.
South Crested Butte is a 5338' peak located 10 miles N/NE of Index, WA. It is the highest and most prominent of four peaks (North and South Crested Buttes, Point 5241, Mineral Butte) on a ridge trending south from Sheep Gap Mountain.
South Crested Butte is a relatively simple, class 2 scramble, and provides views very similar to nearby Hubbart Peak for far less effort. Route finding on this peak is a no-brainer, and for those desiring an overnight, three small lakes are located just off-route, one-half mile from the summit.
Of all the peaks bordering the Silver Creek drainage (not including Silvertip Peak), South Crested Butte probably provides the highest view-to-effort ratio. The most annoying aspect of climbing this peak is undoubtedly the long drive and road walk required to get to its base. The reward for those willing to pay the price of admission: almost guaranteed solitude.

Copied from the Hubbart Peak page - just because I'm lazy.
Follow US2 to the Beckler River Road (FR65), located one mile east of Skykomish. Follow FR65 up and over Jack Pass - the first seven miles will be paved. After crossing the North Fork Skykomish River, FR65 will intersect with FR63. Stay left on FR63, and follow it west - at this point, the road is once again paved. After about 4.6 miles, FR63 will cross the river again. One mile past this point, turn right onto FR6330, which will immediately cross the river for a third time. At this point, you will be about 21 miles from US2, at what was once the bustling mining community of Galena. Shortly after crossing the river, FR6330 will fork. Turn right onto FR6335 (Silver Creek Road). If you are in a normal passenger vehicle, you will want to park shortly after turning onto FR6335, as the road deteriorates rapidly. FR6335 is 'driveable' to a point about 1.5 miles past the Galena bridge, but only for those equipped with high-clearance, four wheel drive vehicles (my Outback made it about 0.7 miles up the road).
Those who want to do less driving, at the expense of some extra walking, can approach the Silver Creek/Galena area from the Index area. From Index, take the North Fork Skykomish River Road north for about six miles, where the road will abruptly end at a large washout. Locate the walking path on the hillside above the old road grade, and follow it to the far side of two large washouts. From here, an easy road walk will lead you to the bridge crossing at Galena. Please note that this approach will add at least six miles of walking to an already long day. It is possible to carry a mountain bike around the washouts, but a large number of blowdowns make it somewhat difficult. See map below for washout detail. 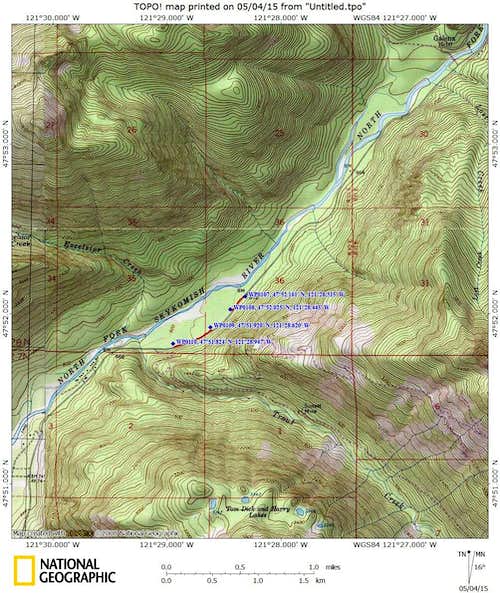 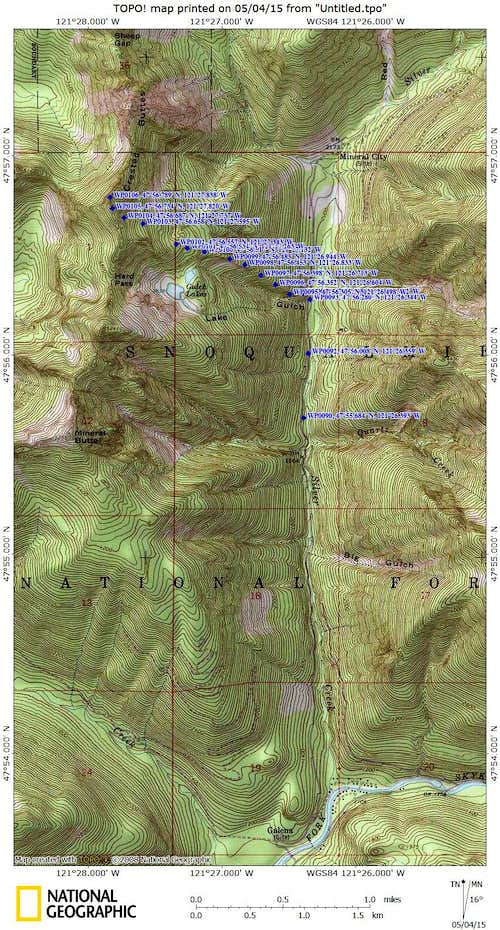 South Crested Butte route map
From the end of the 'driveable' road bed on FR6335, you will now need to follow the old Silver Creek Road an additional 2.0 miles (3.5 total miles from the Galena bridge), to a point just north of 'Lake Gulch'. This walk is in all likelihood the most dangerous part of climbing South Crested Butte. Several bridge and grade failures will necessitate small detours, and there are a few spots with dangerous exposure. For me, the most nerve-wracking spot is an old bridge at about the 2.5 mile point. Positioned above a deep gorge, it appears ready to fall down at any time. If you're not feeling lucky, you will need to find a way around. 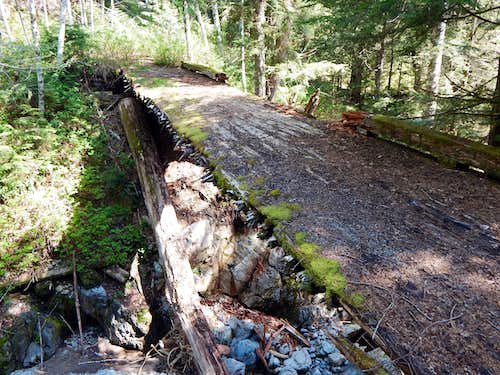 Sketchy bridge crossing on Hubbart Peak/South Crested Butte approach
Shortly after the 'Bridge of Death' (sorry for the Monty Python reference), you will pass 'The Bus' (waypoint 90 on the map). About 0.4 miles past the bus, you will arrive at a fairly nice cabin (waypoint 92). Shortly after the cabin, the road bed will split. Stay to the left, which is the continuation of the Silver Creek Road. 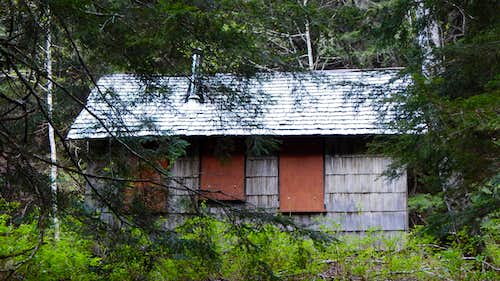 Cabin on South Crested Butte approach march
At a point about 0.3 miles from the cabin, you will arrive at Lake Gulch Creek. The bridge is missing here, so take the well marked detour on the right (east) side of the road. When you come back up to the road bed on the other side, you will be at the start of the scrambling route for South Crested Butte (1900'). 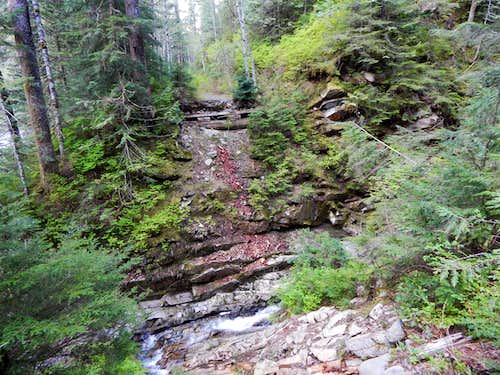 Last drainage before start of South Crested Butte route
Turn left (west) off the road bed, and begin heading straight uphill. The next 300' of elevation gain will be the hardest and brushiest part of the scramble. Upon reaching 2200', the brush will start to thin out. There will be some blueberry bushes to deal with all the way to 4000', but they are pretty tame by Cascade bushwhacking standards. Once established on the ridge, start looking for a game trail that stays very near the crest. I was able to follow this for much of my ascent, and found it to be very helpful. At about 2400', there is a nice view of a substantial waterfall on Lake Gulch Creek. 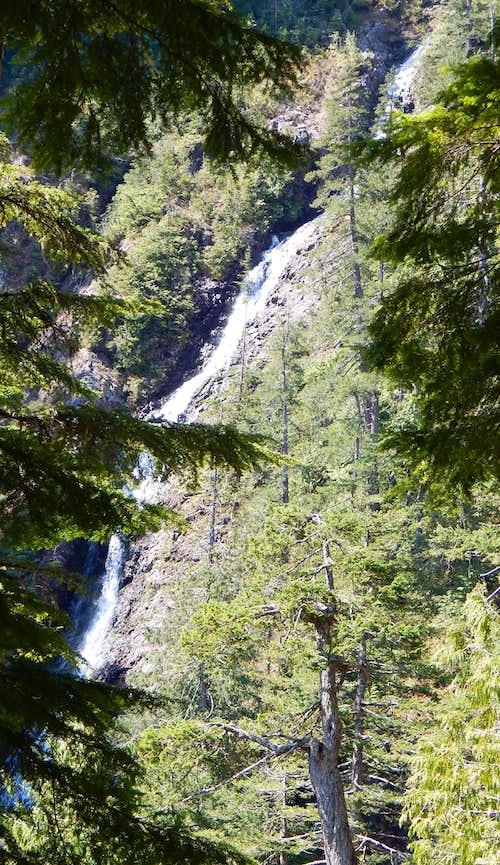 Waterfall from 2400' on South Crested Butte
You will be in fairly heavy tree cover until about 4000', but occasional glimpses of the surrounding peaks will inspire you to keep moving upwards. 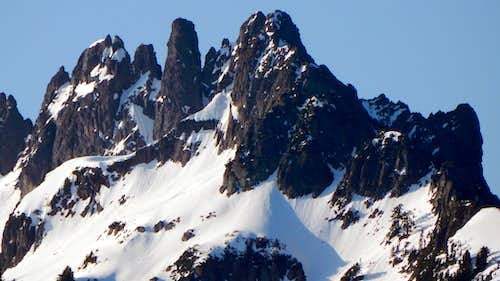 Spire Mountain from 3000' on South Crested Butte
As you near the 4000' point, you will begin to break out of the big trees, and the views of your objective will begin opening up. 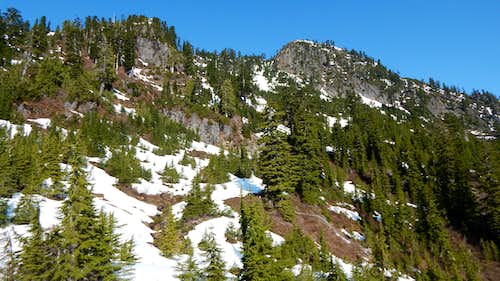 South Crested Butte from 4000'. Route to the summit (on right) should be self-explanatory from this point.
Aim for a point just to the left (south) of the summit block. There are a number of variations possible here (one could crest the ridge further south), but I found that the direct approach worked just fine. Upon arriving at the ridge crest, brushy class 2 scrambling, or brush-free scrambling with a little class 3, will put you on the top. 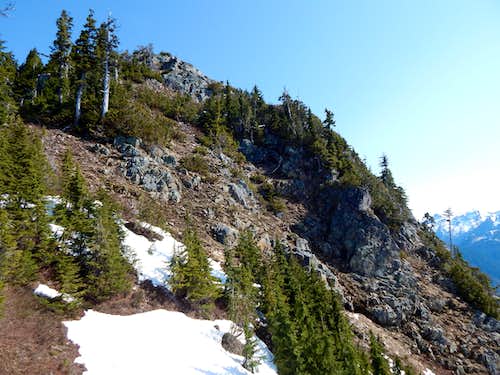 Final scramble up South Crested Butte
South Crested Butte has a large, inviting summit. One nice feature of this summit is that it is cliffed on the west side, but not the east. This means that it does not form the early-season cornices that are so common on Cascade Peaks. 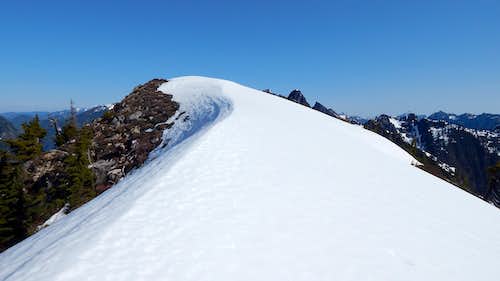 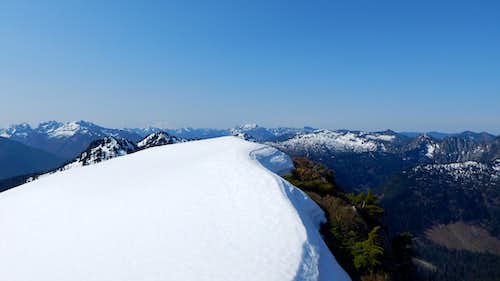 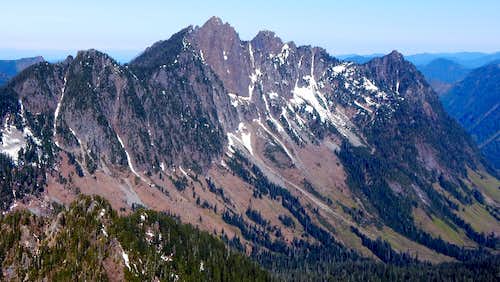 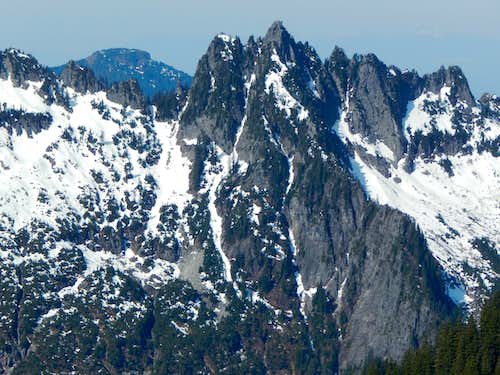 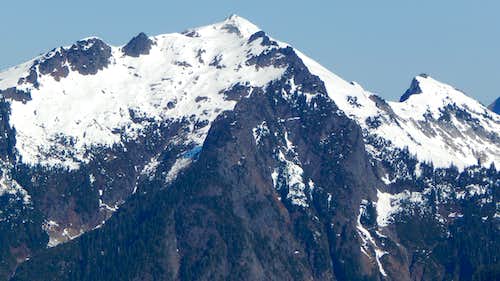 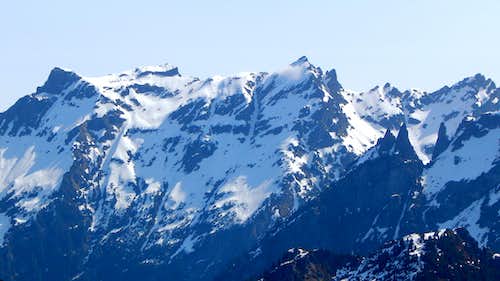 Cadet Peak from South Crested Butte. Wilmans Spires on right side of photo. 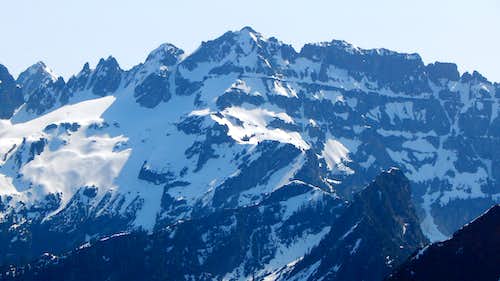 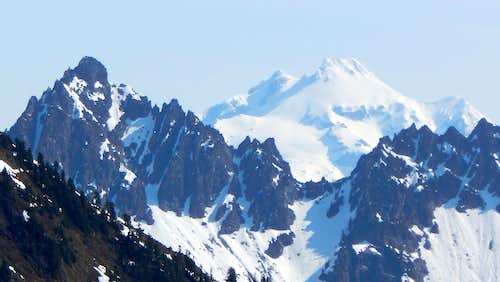 Foggy Peak and Glacier Peak from South Crested Butte. The low point in the ridge directly below Glacier Peak is Ida Pass.

Spire Mountain from South Crested Butte
For those who are interested in traversing the ridge to other peaks, it appears that Point 5241 and Mineral Butte would be fairly straightforward. 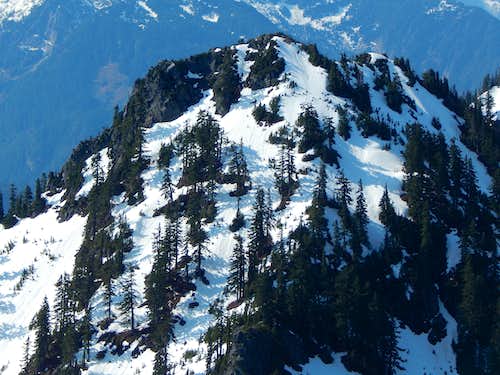 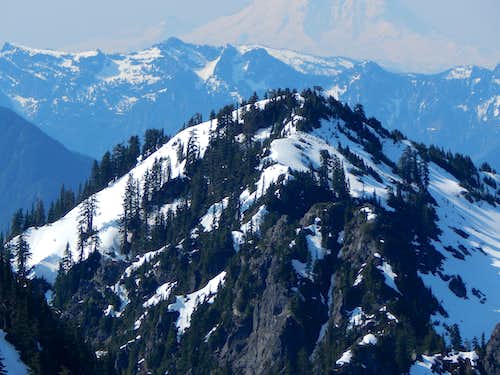 Mineral Butte from South Crested Butte. Little Tahoma and Mount Rainier in far background, Mount Rudderham directly below Little Tahoma.
Unfortunately, it appears as though a traverse to North Crested Butte would be a much more difficult (but probably not impossible) proposition. 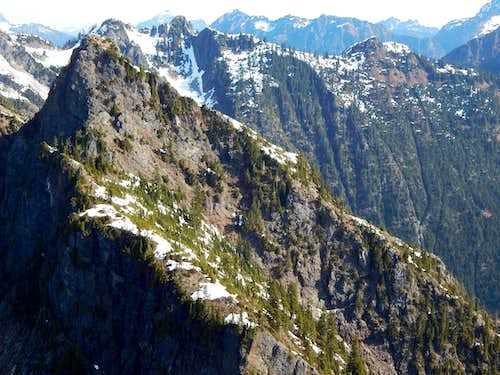 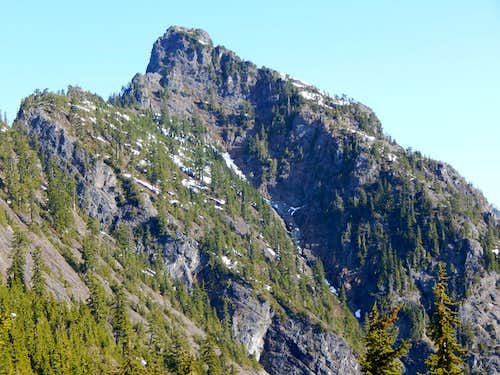 North Crested Butte from 4000' on South Crested Butte
On the way out, I decided to follow the ridge south for a short distance, so as to get a few shots of the Gulch Lakes. 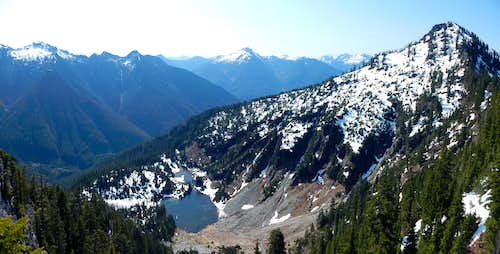 A parking pass is not required for FR6335 (Silver Creek Road) or the North Fork Skykomish Road.

The nearest official campground is the Troublesome Creek Campground. There are several flat spots along Silver Creek Road if you wanted to do your own thing (personally, I recommend not taking water out of Silver Creek, due to all the mines in the area). If you wanted to camp on the route, the best spot would undoubtedly be the Gulch Lakes. It appears that Point 5241 would be an easy scramble from the lakes if one desired to do a '2fer'. 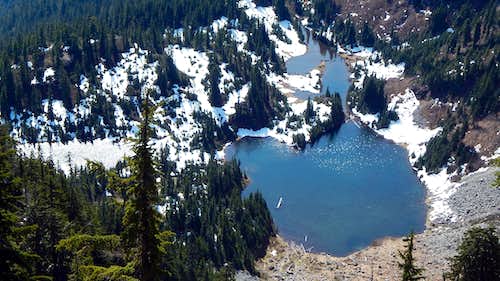