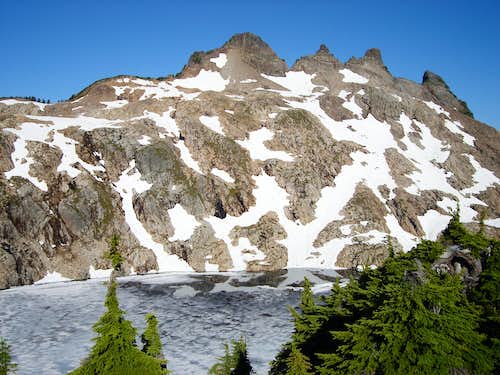 The East Face And Foggy Lake

Gothic Peak is the close neighbor of slightly higher Del Campo Peak. Together they share Gothic Basin, Foggy Lake and are separated by 5500 foot Foggy Pass. The triple summit crags and exposed glacier cut slabs of granite above Foggy Lake give Gothic Peak it's unique appearance and peakbagger appeal. The three summits are oriented from north to south with the southern crag being the highest. Only the east face above the Lake offers a gentle slope. The west and south faces are composed of serious cliffs. The peak was named after William Gothic, one of the first prospectors in the area. The first ascent took place on June 10th, 1934. The pioneer four-man climbing party included Norval Grigg, Art Winder, Don Blair, and Willard Carr. 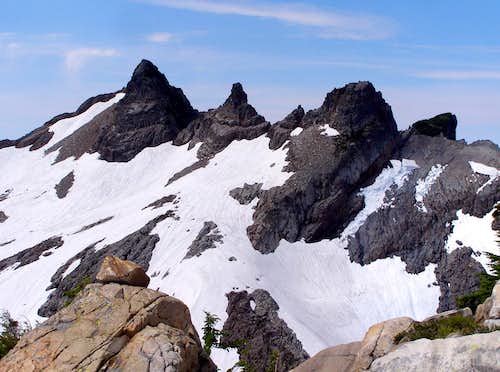 On a clear day the scramble up Gothic Peak yields an inspiring panorama of the mountainous terrain in this stretch of the North Cascades. From the summit, Mount Baker and Mount Shuksan stand out to the north; Del Campo, Sloan, and Glacier are arrayed to the east; Stuart and Mount Daniel are visible on the southeast horizon; Rainier looms to the south; and Pilchuck and the Olympics are off to the west. 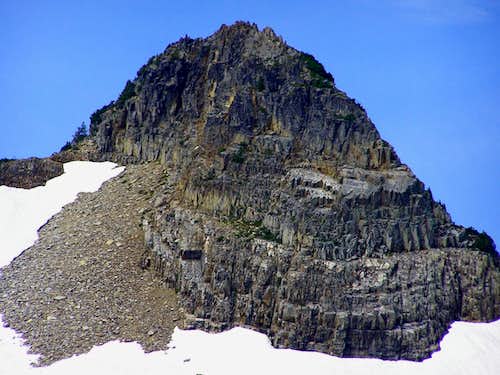 Gothic Peak is rarely crowded even with ideal conditions of the summer. Those that frequent the hikes of the Mountain Loop Highway know that for the most part, Gothic Basin is still an undiscovered jewel. The approach hike to Gothic Basin is steep and to reach the summit of Gothic required experience with scrambling and some route finding skill as well. There are claims that the scramble route is Class 4 but this is not necessarily the case. While there are several Class 4 possibilities, the easiest way does not exceed Class 3. See the route section for more information. 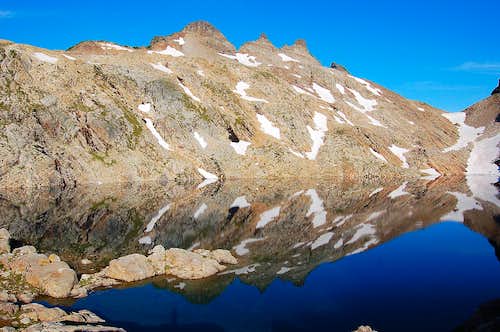 For those that are in excellent shape, Gothic Peak can be done round-trip in 6 to 9 hours. But most people will prefer to make a weekend trip of it, climbing both Del Campo and Gothic, while camping at picturesque Foggy Lake. Sheep Gap Mountain to the south could also be tacked on if you're feeling masochistic but true summit of Sheep Gap required technical climbing skills. Gothic makes for a good winter climb as well, but beware of avalanche conditions. 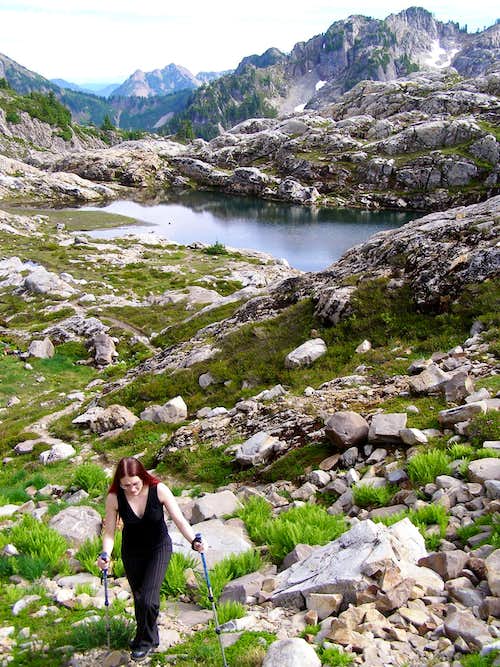 Hike the old road from Barlow pass 1.2 miles to the start of the trail. The Gothic Basin trail (FST 724) starts out gently as it follows Weden Creek for about three quarters of a mile with no elevation gain, then becomes moderately steep as it climbs the wooded slopes. The grade increases in open forest switchbacks for 1.5 miles to a series of stream crossings in picturesque declivities. Enjoy the views across the valley to Silvertip Peak, recognizable by the large red cliff face. At about 3700', the trail begins a long traverse to the south and trail conditions begin to deteriorate about a mile before the trail ends in Gothic Basin. The maintained trail ends at a pond, but continuing to hike up the rocky terrain will take you to Foggy Lake, and the first good view of Gothic Peak. 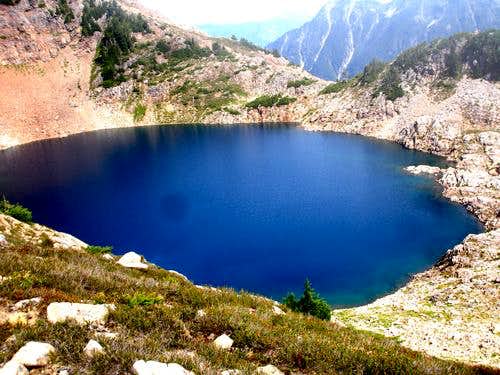 From the pond, travel NW to the outlet of Foggy Lake. Depending on the year, the trail to Gothic Basin should be clear and easy to follow to its end at Foggy Lake by the end of July. Make sure to bring a map and compass especially earlier in the season when snow makes the upper trail is impossible to follow. There are several smaller tarns just below Foggy Lake that sometimes cause some confusion. But you will know you have found Foggy by the sheer size of it. At the widest aspect it is about one third of a mile wide. 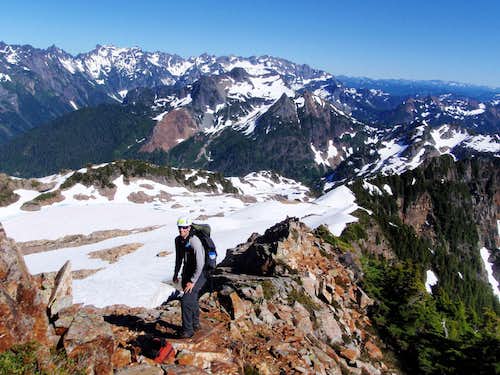 On The Southeast Ridge

Navigate around the southern tip of the lake, crossing over the outlet stream. On the east side of the lake, ascend bare slabs or snow slope depending on the time of the year. Ideally you should come to the southeast ridge of Gothic around 5800 or 5900 feet. Ascending directly west from the outlet of the lake will achieve this. Follow the ridge up towards the summit block until you come to scramble terrain above 6000 feet. It might be necessary to navigate around a large moat. Once again, depending on the snow year, it might be a considerable drop from the snow to the rock, so exercise caution. 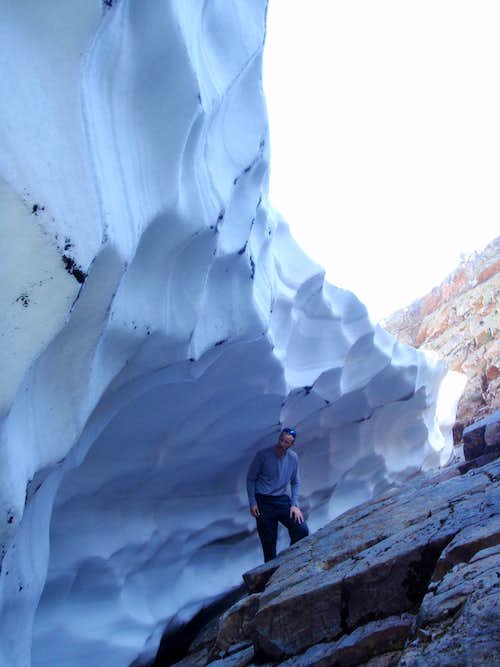 Stop where the ridge abuts the more vertical walls of the summit block. Take a moment to look up at the rock. All around the summit crags the rock has eroded and broken into huge blocks. This can be used to your advantage, like huge steps, although sometimes they are down-sloping. If it looks too difficult, you're probably in the right spot. It's not as difficult as it looks from below. 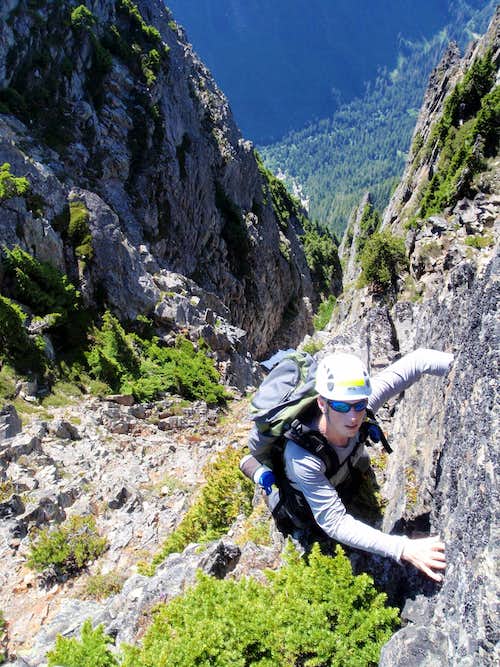 From this point most people traverse to the left, looking for an easier line. If you do so, you will end up facing 4th Class moves above the precipitous south face. It's better to tackle the summit block head-on from the top of the ridge, staying in easier Class 3 terrain. The scramble to the summit is short, only about 100 vertical feet. The large rocks are solid but smaller broken pieces might be loose so check your hand holds. In most cases, people miss the correct route on the way up and ascend the Class 4 section but then find the proper way on the way down which is easier to see from above. 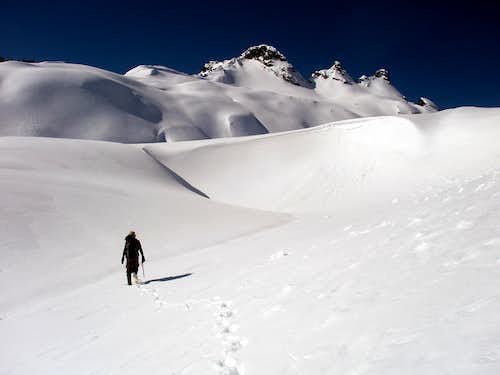 From the town of Granite Falls, drive 30 miles on the Mountain Loop Highway to Barlow Pass. Park in a pullout near the gated road. Proceed past the gate 1.2 miles up the Monte Cristo road. Some folks will prefer to use a bicycle on this old road. The trail begins at a sign board and outhouse. 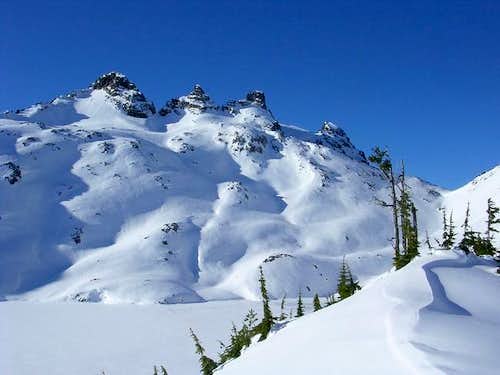 A Northwest Forest Pass is required for parking at Barlow Pass. The first half of the trail is in the Mount Baker-Snoqualmie National Forest; the latter half, including Gothic Basin and Gothic Peak are on Department of Natural Resources land.

Gothic Basin is usually snow-free from late July through mid-October, although snow can remain on the peak until late summer. The standard route could conceivably be skied. Ice axe and crampons are suggested until late August.

Camping is allowed and common in Gothic Basin, primarily on the south shores of Foggy Lake. If you find company and would prefer solitude, good camps and views can be found about 100 meters higher on the SE ridge of Gothic Peak.

This can be a tough hike day hike but worth the burn. It starts out crazy steep in the forest, but the trail is clean and smooth... This is the "easy" part (you're a third of the way to the basin). Once you exit the forest, it gets rough in spots with lots of rocks and roots to look out for. The trail hugs the mountain for a little bit and the views open up dramatically. You'll also see that you still have a long way to go and it's up, up, up... Once you enter the basin though, you're instantly rewarded. It's huge!! And the terrain is striking... it's like you're on another planet. A picture just can't do it justice.


If you start at the parking lot, it's 9.4 miles round triip with a 3050' elevation gain. However, it's flat for the first 1.2 miles and then gradually increases for the next half a mile giving you plenty of time to warm up. The last three miles are pretty steep so it feels like much more.


Carrying only food and water it took us 3 hours to reach the basin and 2.5 hours to get out. If you're not camping out, allow yourself plenty of time to mess around up there because there's so much to see. Most people hiking in were going to camp out. Next time I may backpack in... but that trail is a killer... so maybe not... ha ha.

Bit of clarification on the route in late season: From the outlet of Foggy Lake, head up to the obvious low point on Gothic's SE ridge. There is actually a user trail snaking upwards marked by the occasional cairn - although it's difficult to make out from the distance. Upon attaining the ridge, keep following the trail/route northwesterly (marked by occasional cairns) to a small tarn at the foot of a snowfield. Some people ascend the ridge directly, but the easiest way up is to stay in the scree, climber's right of the SE ridge. Follow this all the way up; the route was marked with numerous cairns as of Sept 2014. At the very top where you reach the summit block, cut left on a small "sidewalk" of downsloping rock (slightly exposed / easy friction slabbing) and switchback up right to the base of the summit block. The route looks to veer climber's left here, but instead scramble directly up from here. It's about 100ft to the summit.

Good clarification - one quick comment, i think when you say 'up right' in the above post, you mean 'up until you are just below'. If you head right (directionally) from the ridge at the base of the summit block it will take you back down the talus and there is no class 3 route here (I looked just for fun). Would be fun if you wanted Class 4 or 5 variations.