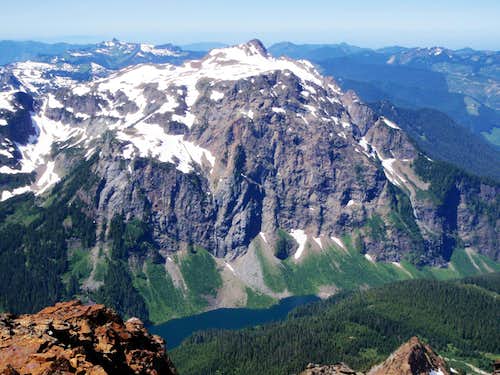 Cliffs On The Northeast Face And Tomyhoi Lake

Tomyhoi Peak is a massive broad peak 1.6 miles south of the Canadian border. There is a high bench glacier on the north side and a lake sharing the same name down below the northeast flanks. This peak is more visible from the roads in British Columbia than from those in Washington, even though it is situated just south of the US/Canada border. It's not certain who was the first to climb to the summit but it was likely Lage Wernstedt in 1927 or Ben Thompson or Clarence A. Fisher in the early 1930's. The name Tomyhoi may have come from one of a couploe different sources. Some of the earliest gold prospectors in the area referred to the peak as "Tommy High". Another possible source for the name is the Native American word for deformed which is "tammiax". (see Fred Beckey's Cascade Alpine Guide: Rainy Pass To Fraser River)

The most popular route is from the Yellow Aster Butte Trail off Highway 542 east of Bellingham. Even from the Yellow Aster meadows area, the full stature of the mountain is not particularly visible, being hidden by the approach ridge. What is so impressive about this peak is that it is extremely steep on all sides and yet has broad flattish benches and ridge tops which finally culminate in a precipitous rocky summit horn.

If what you want is views, this mountain is hard to beat. Even though this peak breaches the 7000 foot mark, it's immediately surrounded by larger peaks which make for grand views. The most notable surrounding giants include Mount Baker, Mount Shuksan, Mount Larrabee, American Border Peak, and Canadian Border Peak. The heart of North Cascade National Park is also visible, as is the Coastal Range in British Columbia. 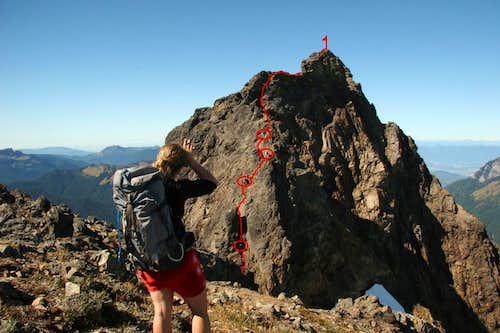 The Yellow Aster Butte trail is well defined and very easy to follow. The first half mile gradually ascends a south facing, open, brush-covered slope. The trail then briefly enters the forest as it crosses over a ridge. Turning now to the north the trail enters a sort of alpine basin where views of Mount Baker to the south begin to open up. About a mile from the trailhead there is a fork with the right branch leading up. Take the left branch. The right fork leads over Gold Run Pass and then down to Tomyhoi Lake. 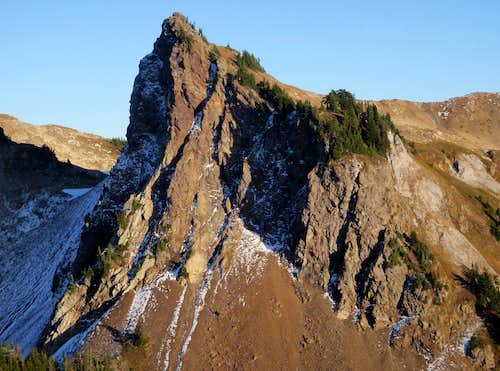 Beyond the fork the trail makes a gradual turn to the southwest, running along plentiful blueberry and huckleberry slopes. 1.5 miles from the start, the terrain briefly becomes rockier and there might be a stream or two to cross. At two miles, the trail is directly south of the south summit crossing more blueberry and huckleberry slopes. Here the views of Mount Baker and Mount Shuksan become quite dramatic. 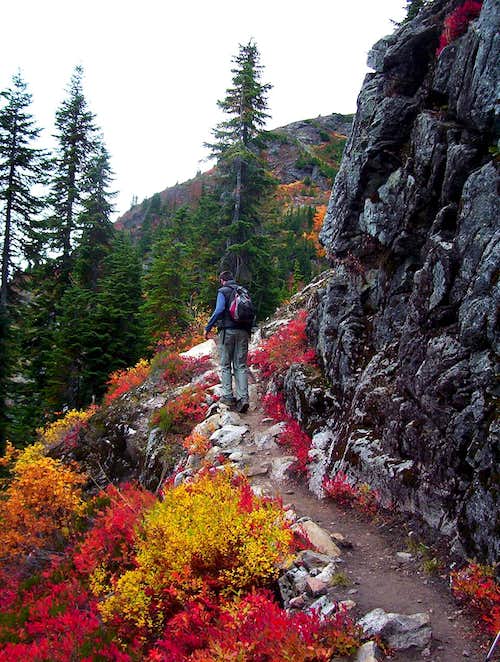 Beyond the berry slope there is another fork which is easy to miss if you don't know it is there. It's near the ledge overlooking Tomyhoi Peak and the multiple tarns down below in Yellow Aster Meadows. A small boot path switchbacks down a very steep brushy slope toward the tarns. It's 3.5 miles to this point and another 2.5 to go on to the summit. Here begins the standard route to Tomyhoi. From Yellow Aster Meadows the southeast ridge is visible. 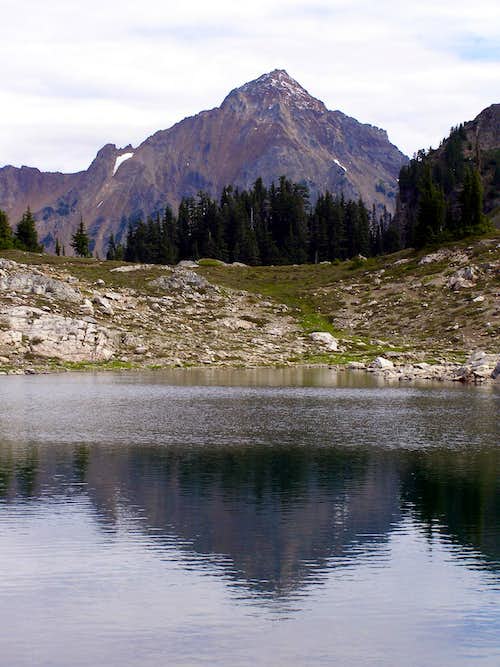 Mount Larrabee From The Meadows

Cross the broad rocky meadow area in a north by northwest bearing, navigating around the tarns, finally coming to the boot path that steeply ascends the beginning of the ridge. Follow this path as it meanders along the ridge with views to the north of the Border Peaks and Mount Larrabee becoming more and more striking. The path temporarily dissipates at the first high point around 6450 feet. Most months of the year, residual snow can still be found here. 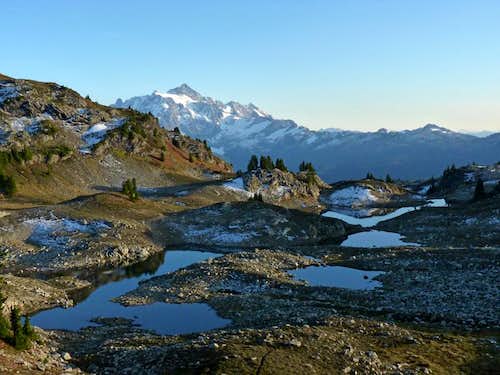 The Tarns Of Yellow Aster Meadows

Continuing in the north by northwest heading, the boot path soon becomes apparent again and descends steeply to a notch in the ridge before going up again on the other side. A bit of easy scrambling might be necessary to climb up out of the notch. The path now turns more to the north as it passes the southern false summit which is just over 7000 feet. 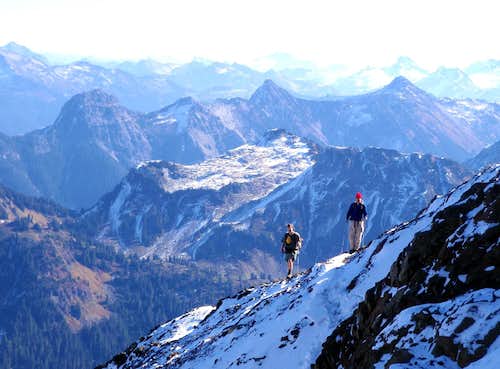 Further on, one path goes directly up to the ridge top. This way will not lead to the summit (I have tried it). Gaining the ridge top prematurely will only lead to impassable gendarmes. Take the lower path which leads to the glacier on the north face. The goal here is traverse along the top of the glacier to a point where you can gain the ridge but still avoid nasty gendarmes. Most parties do not use a rope on the glacier but crampons and ice axe are recommended. 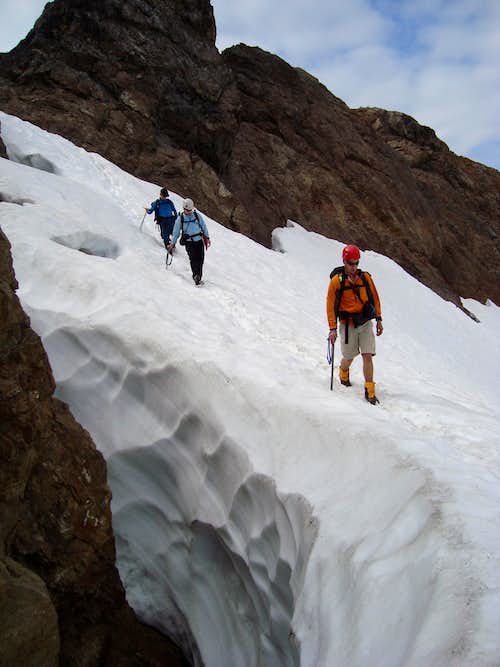 Depending on the time of the year and the condition and amount of snow present, there are a couple of places that offer access to the ridge crest. If you get into Class 4 terrain, turn around and look for an easier way. There are several gullies to choose from. When we were there we had to squeeze through a moat at the top of a snow finger and then scramble up a Class 3 gully. Once on the ridge crest the remainder of the route involves a lot of Class 3 scrambling. Depending on where you gain the crest there might be a bunch of rotten loose gravel on the southwest side (left side). From where we started on the crest we had to scramble around a corner and then climb up a 20 foot chimney before finding easier terrain. 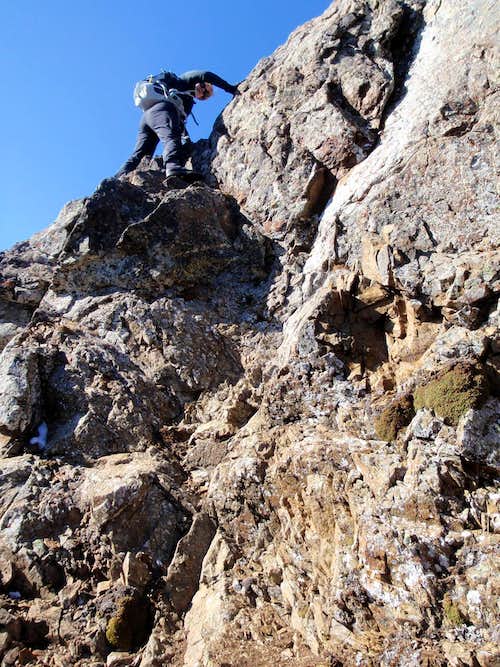 Scrambling On The Southwest Side

Follow the southwest side, utilizing ledges, until coming to another false summit, which is broad and flat, at 7370 feet. From here the true summit is visible. Scramble down to the notch at 7250 feet and then up the wall which looks fairly difficult from the false summit. Thankfully this wall has none of the loose stuff that is encountered earlier on in the route. Favoring the right side of the wall near the top edge, plenty of good hand and footholds become apparent. 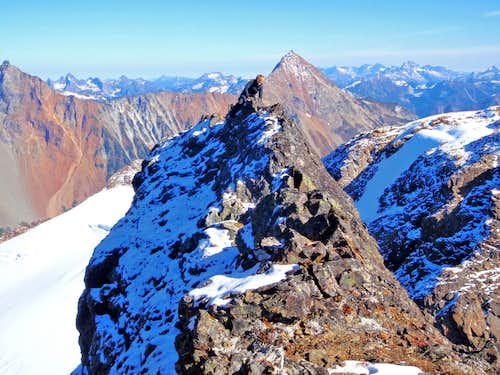 At the top of the wall there is a 40 foot long gabled ridge which has considerable exposure on either side. On the right side it's hundreds of feet down to the glacier while on the left side the southwest face falls away for thousands of feet. Without snow, this section may be easy if not a bit nerve-wracking. With some snow, it's probably safest to cross à-cheval, with one leg on either side. Beyond the gabled ridge turn a corner to the right and follow easy ledges up to the summit, which is airy. 12 miles round-trip. 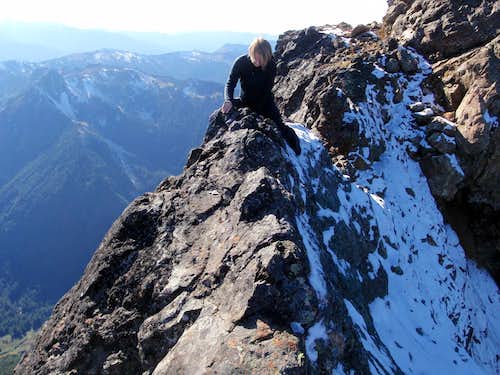 To see Beckey's description of this route see the Southeast Route page at left. 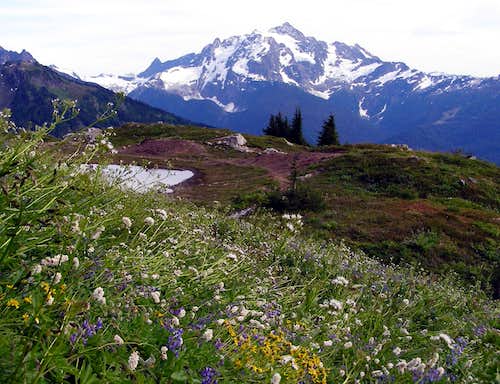 From I-5, take exit 155 east and you will be on the Mt. Baker Highway. Follow the Mount Baker Highway #542 East for 46 miles. Just past marker 46, turn left on the Twin Lakes Road at the DOT Maintenance Station. The road begins at the east side of the DOT station parking lot. If you pass the Hannegan Pass Road on cross the Nooksack River, you've gone too far.

Drive the Twin Lakes Road 4.5 miles to a hairpin turn that is the parking area for the trailhead. There is a sign board here and an outhouse. The 2 mile drive beyond this will take you to Twin Lakes and the trailhead which leads to Winchester Mountain, High Pass, and Mount Larrabee. The last two miles to Twin Lakes are gnarly though and recommended only for those with 4WD and good ground clearance.

All trails and some picnic areas and campsites on the Mt. Baker- Snoqualmie National Forest require a regional pass costing $5/day or $30/year. Please see this page to learn more about this pass and where one can be acquired. The pass can be purchased online from the Washington Trails Association.

Optimal conditions for climbing Tomyhoi Peak occur from June through September, depending on snow and weather conditions.

Camping is not allowed along the Yellow Aster Butte Trail. The best campsites are at Yellow Aster Meadows among the beautiful tarns in that area. But be warned that this is one of the most popular alpine camping destinations in the entire area. If you are going during the weekend, be mentally prepared to have plenty of company.

If you're looking for solitude, you'd better camp here midweek as the area gets a lot of traffic on weekends.

I haven't been much of a fan of the newer cutoff from the Gold Run Pass trail. It may be a flatter approach but it seems to waste distance doing it, I didn't find it to save any time or effort. I also was disappointed by the manner in which YA Butte has been marred by the trail, and the way it plops one directly into the upper tarn area. The USFS claimed that the old Keep Kool trail was difficult to maintain ( and I suppose it was, though I saw little evidence that they tried ). I will admit that Keep Kool is pretty steep and rugged in places. Still, I find the old trail a more aesthetic progression( even in spite of the recent clear-cut), moving from falls, to the lower meadows, to the lower and upper tarns. In winter or spring, the Keep Kool approach is still the logical choice. Hopefully there's some other die-hards out there who will continue to put their boots to this historic trail and keep it from disappearing completely. For those who wish to find it, the trailhead is at the end of a short spur road that branches sharply left about 3 miles up from the highway.

I do not think that the USFS ever had anything to do with the Keep Cool Trail. It is an old mining path that just took the most direct route. Plenty of old minining relics in the meadows. I foud going up the Keep Kool Trail bad but going down was a lot worse. I wouldn't care if this historic trail disappeared--aside from the fact that I'm too old to go there--but I admire those with the fortitude to use the trail.

My father and a Mr Newt Baker reopened Keep Kool in the 50's and I have been going up there for 36 years of so . The trail is a nice way to make a loop of the area and it does seem that it is cleared from time to time by folks like myself . It is a bit steep I suppose but we used to get horses up to the lower and upper medows once upon a time . You can loop over to welcome pass as well from there . Enjoy

Not sure why this peak gets hyped up. If you are comfortable with class 3, it is fine. The exposure is not terrible, and the most exposed parts are relatively solid. In mid-day conditions during late summer, I have not felt that an ice axe and crampons were necessary. The run out from the moat down to the glacier is short, not very steep, and did not look high consequence. This is a great scramble though.

Next party heading up to Tomyhoi should bring a new summit register, . . . current one was completely filled and then some.