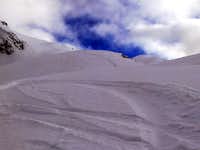 Ski Tracks up Han Peak
Han Peak is located in the North Cascades between Mount Baker and Mount Shuksan which this peak is not very well known. Next to it is it's much more famous neighbor Mount Ann which I believe had an influence on the name of this peak (Peak Baggers some times Run out of ideas) but then again it could be Han Peak. According to peakbagger it's Mount Annette, but Klenke calls it Mount Han as well as a few others. Like Mount Ann, Han Peak has amazing views that make the long drive here worth while. This is usually done as a single day trip (although also good for overnight). The Mountain it self has a decent slope for skiing as well as the mountains near by. Also this mountain offers stupendous views of Mount Shuksan which if you catch it on a day like I did, you will glaze up at it's beautiful West Face. 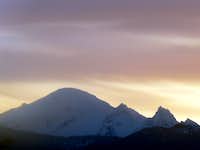 Mount Baker on the Way
See Directions to Han Peak on Google Maps.

Coming in from South of Bellingham:
To get to the Trail head of Han Peak you drive North on I-5 until you get to Bellingham which you take a right onto Highway 542 (East Sunset Drive) which you follow along the highway until it pretty much ends at the Mount Baker Ski resort. The parking lot for this one starts next to a lake called "Sunrise Lake" which is where the Mount Baker Lodge is. In later season the road is open all the way to Artist Point which is past the trail head of this mountain.

Coming from North of Bellingham (Lynden, Abbotsford, and Vancouver):
From Lynden: Head east on 546 which then turns into highway 9. Then as you head north you take a right (East) onto Highway 547 (W Front Street) which goes all the way to Kendall, go straight which goes onto 542 (East Again) which will take you to the Mount Baker Ski Resort.
From Vancouver: Head south to Bellingham until you see 542 which from here you go East on it until you get to the Mount Baker Ski Resort.

On a good weather day the views alone from the trail head I find to be quite fabulous! So no matter how far you make it, you won't be disappointed. From the parking lot you can see Mount Shuksan, Mount Sefrit, Mount Larrabee, Goat Mountain, and so on.

Mount Shuksan with a Lenticular Forming from the Parking Lot

Both winter and summer descriptions are almost exactly the same where you go, but each gives you a better understanding of the way depending on the season.

Summer Description: During later summer you can drive right to Austin Pass which you'll take the Lake Ann trail. From Austin Pass you head on down the valley following the trail towards Lake Ann. At Point 3930' the trail forks which is where you start hiking off trail almost directly south. The summit should be an easy mile and half or so walk which near the top cork screws around from the east to the south side.


Winter and Snowy Season Description: During early season you hike south from the lower parking lot and ascent a little ways up to Austin Pass. From Austin Pass you lose about 800 feet of elevation going down the valley heading southeast right below Shuksan Arm. At Point 3930' you soon cross a creek which depending on where you cross you may have difficulty crossing. Either look for a snow bridge or head higher up the slope for a better crossing.

Han Peak (left) and Mount Ann (right) from the Basin

View from the Lower Basin 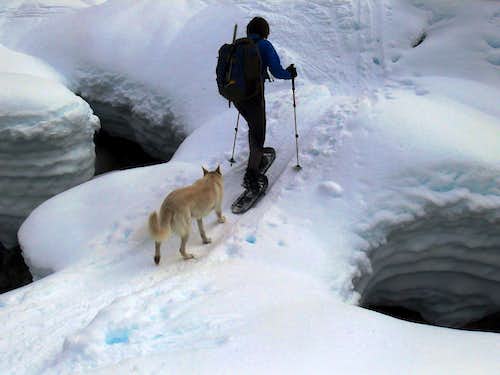 Crossing a Snow Bridge
After crossing the creek you should clearly see Han Peak (left) as well as Mount Ann (right). During this time of year the direct basin route is the best approach for Han Peak. It starts out in front of Han Peak and then as you travel up (south) you end up going towards the middle between the two summits. I suggest avoiding the North Ridge in winter because I saw it bulked up with a pretty big cornice and saw an avalanche come down the North Face. The slope then gets a little steeper at a few spots and then it goes right onto the ridge between Han Peak and Mount Anne. Be sure to go left (east) to summit Han Peak which is a simple little round about to the top. Views from the summit in my opinion were mind blowing. If that's not enough, be sure on the way back down to tag the summit of Mount Ann as well which makes for a double summit day. 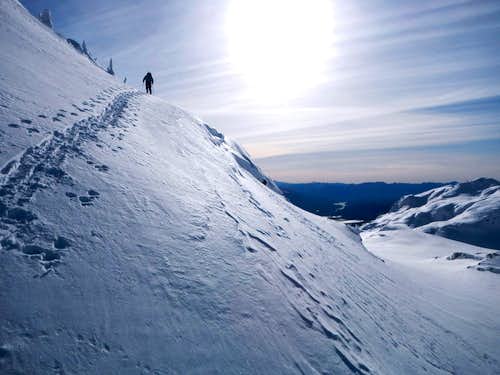 Nearing the Summit of Han Peak
So I suppose it's only 3,000 feet of elevation gain with about a distance of 10 miles (It's about the same as Mount Ann) but personally it felt like more work than doing Mount Si although I did run when getting both summits so who knows, and it was snowy when I was here.

There may be Trail Park Pass requirements at Mt. Baker Ski Area (when I went there was not but regulations could change based on the season).

Lake Ann is said to be a good place to camp near by or there are some unofficial camping spots you could pitch a tent in the woods, or on the high ridge near the summit. 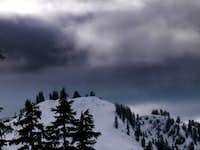 Stormy Clouds Near By
For Weather information check in with the Noaa Forecast. 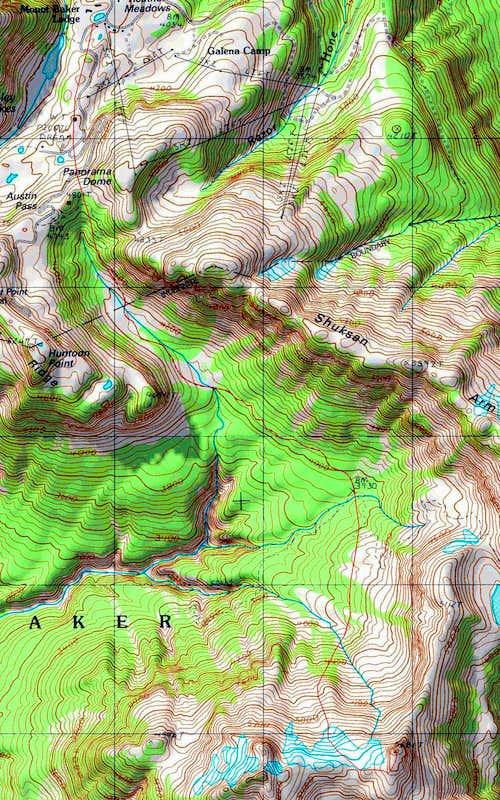 Topographic Map of the Route 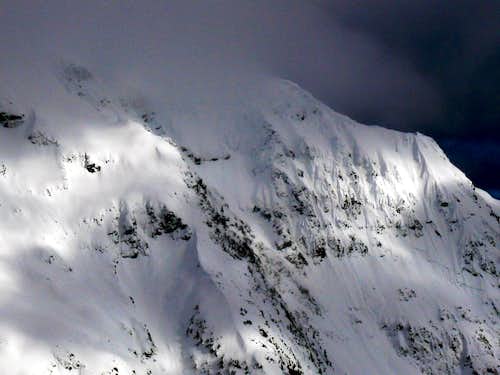 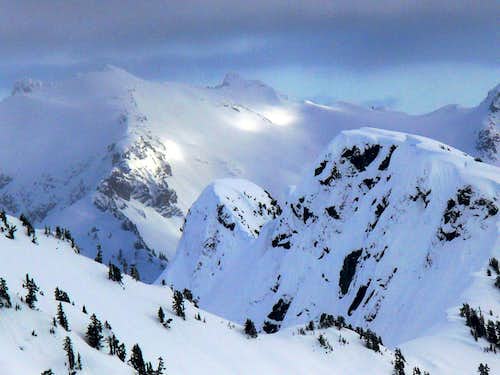 Looking toward the Picket Range

Mount Ann and Han Peak (known as Annette in the Video) Video by Bryan K.

Here is another gallery of Han Peak and Mount Ann.