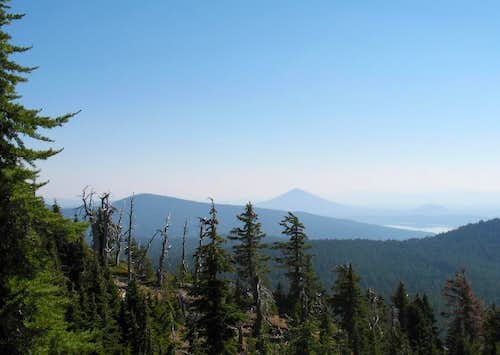 Most people that drive in this part of Oregon may not even pay much attention to this conical peak that is heavily forested as it has nothing particularly impressive about it that stands out. There are many similar looking "peaks" in the area but I'll try and clear up what makes this one more important than some of the others.

From road 58 you can see the lookout perched at the top of the mountain and what makes it a bit more interesting is that this is a working lookout that is still manned and kept up. Those who "collect" lookouts, particularly the intact ones that still exist, have this one at near the top of their list.

There is nothing difficult about this peak located south of Bend Oregon but it is one of importance to those people (like myself) who are actively trying to summit all of Oregon's 75 prominence peaks. Odell Butte ranks #53 on the prominence list with 2192 feet of prominence although only 73 of the peaks on the list have the required 2000 feet of prominence. It is one of the volcanic cones that dot the landscape in this part of Oregon and I hope to add more geologic information about the volcanic aspect in a section that will be found below.

A road leads to the summit but it is gated near the top requiring about a mile walk to the top in order to claim this one. The high point itself is located in some rocks next to the lookout requiring a little scramble to touch the highest point, which contains a benchmark. You should avoid climbing up the lookout unless you have permission from the lookout to do so and the highpoint is accessible without using the lookout structure.

Odell Peak has a nice view from the lookout tower but lower down the views are limited by trees. Here's a little information about the lookout and more will be added in a section below:

The view from the top

To get there from US 97, find the Crescent Cutoff road in the small town of Crescent Oregon and drive west 7 miles to the Odell Butte Road, found on the north side of Odell Butte. Turn south on this road (dirt/gravel) and drive to a gate, located near the top of the peak. It is 6 miles from where you leave the Crescent Cutoff road (county road 61)and turn onto the Odell Butte Road to the gate. Park at the gate and walk the road, a distance of 8/10ths of a mile and a mere 500 feet of elevation gain. 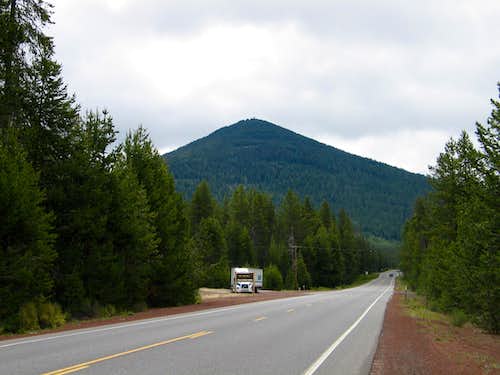 Looking east
If you are coming from I-5 (exit 188) via Oakridge on highway 58. It is 73 miles to county road 61 (crescent cut off road) and another 4 miles to the Odell Butte road on the north side. After you pass the Crescent Creek Campground about 3 miles from highway 58, start watching for the Odell Butte Road on the right, it is within a mile or so.

Note: Prior to finding the turnoff to county road 61, you will pass through the small town of Crescent Lake Junction and Odell Butte will be right in front of you as shown in the picture titled 'looking east'. 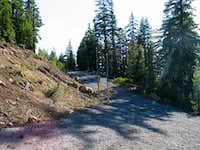 The "trailhead"
As mentioned in the "getting there" section, this isn't much of a hike if you can drive up to the gate that is located less than a mile (about 8/10ths) from the summit via a road walk. Round trip is less than two miles and the elevation gain is about 500 feet. A working manned lookout is at the top and sometimes the lookouts will allow you to visit them if they aren't overly busy. Please ask permission before you go all the way up to the top of the stairs. 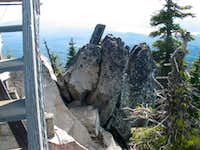 The highpoint is in the rocks to the side of the lookout and needs to be approached by a short scramble just off to the side of the stairs. There is nothing difficult about the scramble if the rocks aren't covered by ice or snow. The USGS Benchmark is located in a pocket in the top rock that you can access by a minor bit of rock work on your part (no exposure) 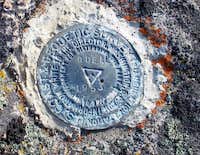 The nearest campground is the Crescent Creek Campground and it is a bare bones campground, located a mile or so west from the Odell Butte Road on the north side of the peak. Click here for a topozone map. The small campground has ten sites with vault toilets and drinking water available. This campground gets light use most of the year except during hunting season when it is often full. It is possible to car camp in a couple spots near the junction of county road 61 and Odell Butte Road.

There are other campgrounds in the area, actually, quite a few within just a few miles of Odell Butte.
Just north a couple miles on highway 46 is East Davis Lake and Lava Flow Campgrounds. Near Crescent Lake and Odell Lake there are several more. 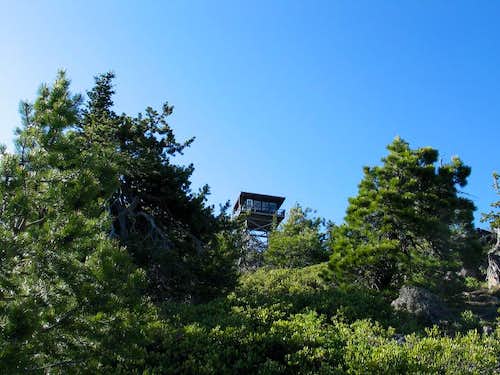 Map of the Area. 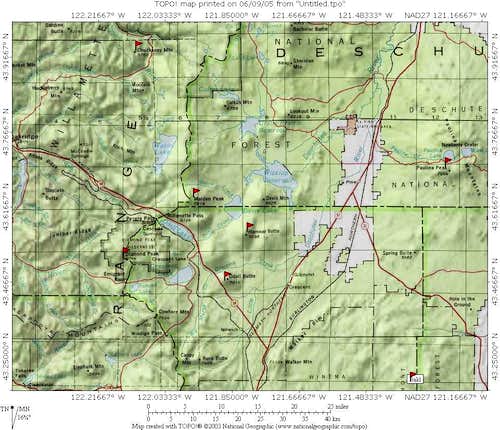 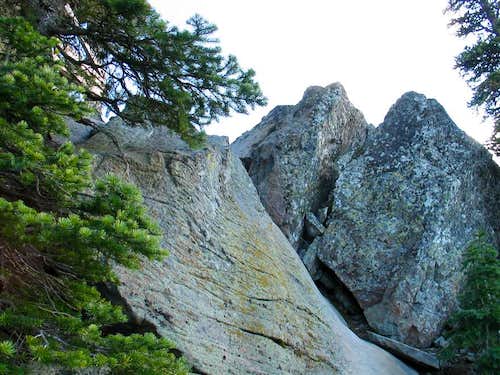 Odell Butte is a shield volcano and some terrific information about the different types of volcanoes can be found HERE. I originally thought Odell Butte was a cinder cone but in exploring this on google found sites, I was informed that Odell Butte is a shield volcano, not a cinder cone although there is a small cinder cone on Odell Butte called Little Odell Butte. Near the turn off to the Odell Butte Road on the north side is a large lava flow area. Unfortunately I failed to take any photos of this aspect of Odell Butte when I made my first trip but I'll be returning to the area again this summer and will take more photos. This area of Oregon is intriguing and one visit is not enough to take in all that you can see and learn.

From a forest service information page (no longer found on the net)  I found this tidbit:

"The most recent episode of volcanism produced the High Cascades and the high volcanic peaks perched on the crest such as the Three Sisters, Broken Top, and Mt. Jefferson. The High Cascades consist mostly of large numbers of overlapping shield volcanoes. An excellent example of a shield volcano is Belknap Crater volcano along the McKenzie Pass Highway (State Highway 242). At McKenzie Pass, great fields of rough, black lava, 1500 years years old, form a flattened cone 4 miles in diameter with Belknap Crater at its center. Some lava has flowed many miles beyond the cone. Elsewhere in the Cascades the chemistry of the lavas and short length of lava flows created much steeper and taller cones such as Black Butte and Odell Butte. South Sister, Broken Top, Mt. Jefferson, and several other peaks have a more complex volcanic history."

One of the most OUTSTANDING sources I've seen on volcanic information in Oregon is THIS PAGE.

A working lookout is atop this peak (or butte) and adds a bit of flavor to the mix and is of particular interest to those who love the lookouts of the northwest and try to visit them.

Looking down to where the lookouts park 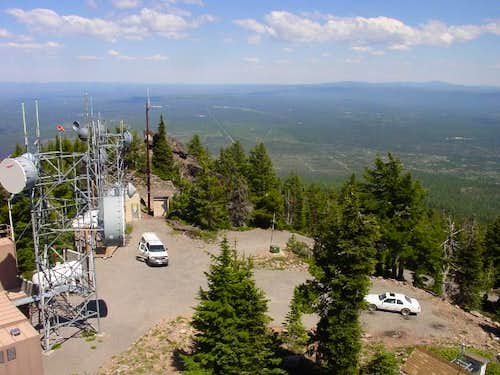 From inside of the Odell Butte lookout 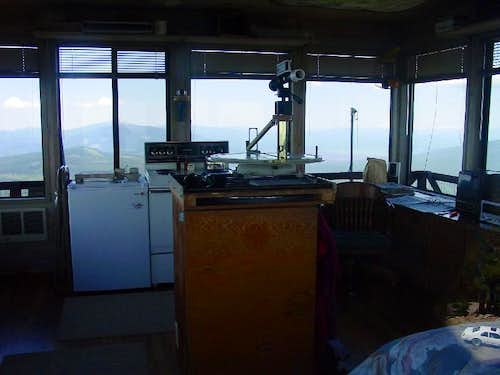 End of definition (is everyone clear on the meaning of Butte now?)