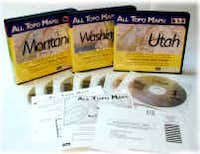 All Topo is a map software program by iGage with topo maps covering mostly the western states.

It includes the software to view, annotate, export and print maps.

Incuded is a GPS Tool for uploading/downloading coordinates to GPS devices.

All Topo Maps is a bit cheaper, but not as good or user friendly as it’s competitor, National Geographic Topo!.

The best feature and advantage of All Topo Maps is that the new versions also include the 1:63,360 scale maps, a.k.a. the 15 minute maps, something which isn’t available with Topo!.

Resolution is no where near as good as it is with Topo! All Topo Maps is not as user friendly either. Instead of the maps being on one big sheet they are all separate files and you have to seam them together in one file in order to see a location on two separate maps.