The main ridge of the Carnic Alps is one of the longest consecutive ridgelines of the eastern Alps, measuring almost 100km from Kreuzbergpass / Passo di Monte Croce in the west to Thörl-Maglern in the east. Still, even though a long trekking trail (Karnischer Höhenweg / Traversata Carnica), runs along its crest the area is still rather unknown. Only a couple of summits made it out of their obscurity, mainly the highest summit of the range, Hohe Warte / Coglians and Hochweißstein / Peralba.

The latter is located in a part of the main ridge, in which only few remarkable summits are located anyway, most of them grass summits of moderate elevation. Among these the huge bulk of Hochweißstein / Peralba rises to almost 2700m dominating the whole area. Far from being a beautiful mountain, Hochweißstein / Peralba impresses by it sheer size, a huge, almost cubic block of stone with a large, sloped summit plateau. There is no easy route to the summit, a ferrata and two UIAA I routes are the least difficult ones. Still, on a fine day you will always find a crowd of people up there, thanks to two mountain huts, which are located in the direct vicinity of the mountain. In the north, still on Austrian ground there is Hochweißsteinhütte, in the south-east you will find Rifugio Calvi. From either of the huts the ascent of Hochweißstein / Peralba can be completed in little more than 2h.

The area around Hochweißstein / Peralba was heavily contested during WW I when Austrian and Italian troops fought over the possession of the Carnic Alps main ridge. The mountain, with its domination over the surrounding area and its big summit plateau on which fortifications could be easily constructed, was one of the main targets. The other was the possession of the upper Piave Valley, which in a bend leads behind the south slopes of the main ridge and thus granted easy access for the Italian troops. Thus, Hochweißstein / Peralba as well as the Monte Lastroni - Cresta Righile / Cresta del Ferro Ridgeline on the other side of the valley were heavily fortified. Even today you will find lots of remnants of the war 90 years ago: caves, positions, even an old fort.

Today, Hochweißstein / Peralba is completely located on Italian ground. The main ridgeline - and thus the Austrian - Italian border - runs along several hundred metres to the north. It is also most easily reached from the Italian side, as an old WW I supply road remains being maintained and leads to the Sorgenti del Piave (the sources of the river Piave) which are located directly underneath the giant south face of the mountain. From there a dirt road leads to Rifugio Calvi. At all times climbing routes were being established on the faces of the mountain and the following section gives an overview over the classic ones. 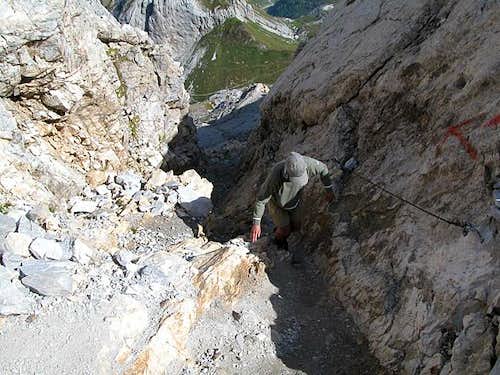 Schwarze Rinne, the crux of the normal route

There are a lot of routes onto Peralba. Here is a overview of the classic ones. You can find more details in the (German) book by P.Holl, Karnischer Hauptkamm, Rother Verlag, ISBN: 3-7633-1254-4.

As stated with all other summits on the Carnic Alps Main Ridge Hochweißstein / Peralba is located close to the Austrian - Italian border. Even though you won't need it - bring your ID.

There are campgrounds near the villages in the Lesachtal and Piave Valleys. For overnight stays near the mountain use the Huts (Hochweisssteinhaus and Rifugio Calvi). You can find all mountain huts and refuges in the area on the corresponding section on the Carnic Alps Page.

For hotel rooms or apartments, look at the following links:

The Carnic Alps Main Ridge serves as a weather divide between the Austrian north and the Italian south. The weather can change rapidly so that definite predictions are difficult. Look for information from both sides of the border. Head out early since the weather tends to change around noon.