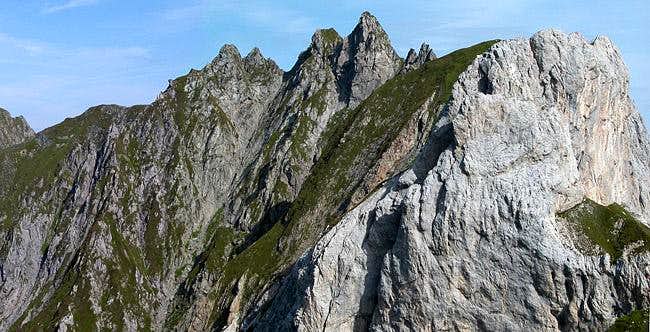 Weißsteinspitze - I'm afraid I have to use the German letter 'ß' here, 'sss' just looks too dumb - is one of a handful of limestone mountains which pop up their cliffs in the central part of the Carnic Alps Main Ridge (West). Together with Monte Peralba, Monte Chiadenis, Monte Avanza, Monte Avastolt and Torkarspitze (Monte Pietra Bianca) it forms a white limestone island in the otherwise black and overgrown ridge. Not unlike the reefs or atolls, which they were during the Ordovicium Age, when the whole area was covered by a sea.

From the west Weißsteinspitze, a twin peaked summit, shows a near vertical limestone face, which is where most of the climbing routes upon the mountain are located. From the south and east it shows a very steep grass covered slope. Here the two normal routes ascend the mountain. Both are UIAA grade II with not many places to put protection. Especially near the summit the paths become steep and exposed.

In importance Weißsteinspitze cannot keep up with the neighbouring Monte Peralba and Monte Chiadenis. Both are very popular destinations, especially among Italian climbers and hikers. On Weißsteinspitze you will almost have the same views, while you can enjoy the solitude of a mountain-top, which is hard to reach.

As I have done on other pages I will only include the abstracts of the climbs here. Complete descriptions can be found in the German Alpine Club Guidebook (German): P.Holl: Karnischer Hauptkamm, Rother Verlag, ISBN: 3-7633-1254-4. 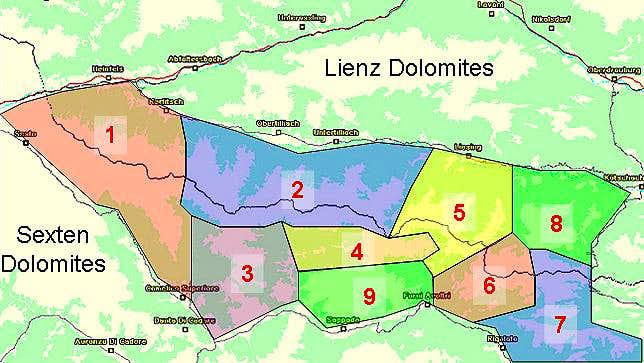