Imposing massive rock, also known as Lis d'Arnasca. It's less famous than the major mountains of Val Masino, like Pizzo Badile or Pizzo Cengalo, but is really very important as topographyc point.
It rises above 3 valleys and is the hub of 3 ridges : the one that divides the Val Codera (on the East) from the Val dei Ratti (on the South) and the Val Masino (on the West) : this section of Val Masino is also named Val Ligoncio.
The East ridge, between Val Codera and Val dei Ratti, includes some very good looking peaks : the Cime di Gaiazzo, the Punta Magnaghi and the Sasso Manduino.

Pizzo Ligoncio looks like a triangle pyramid, impressive from North, where its big and smooth rocky wall rises above the Val Spassato (part of Val Codera).
The 3 ridges are interrupted by passes that allow to discover every side of the mountain along confortable paths.

The only NW face can offer difficult rock routes on very nice granite while the routes on the others flanks are quite easy. Anyway the position makes this mountain one of the best belvedere of the Val Masino Alps and of the Orobie Alps. 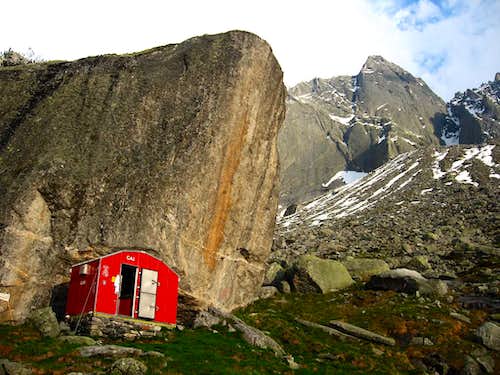 The north-west face of Pizzo Ligoncio,in foreground the biv. Valli.

How to get here.

The mountain is totally placed in the Italian territory, between the Val Chiavenna, Val Masino and the major Valtellina.
Many routes and solutions give the possibility to reach the mountain and the related valleys:

From Novate Mezzola (or Verceia)
By car,trains,busses by road SS36 from Milan or Sondrio.
Two valleys : the Val Codera and the Val dei Ratti.
They are low and very nice to visit for the old style villages typical of this area but the starting points are very low so a big difference in elevation is required to get the high part of the valleys and the Bivouacs:
Bivacco Valli in Val Codera and Rifugio Volta in Val dei Ratti

From Val Masino:
The major village of Val Masino is S.Martino reachable from Valtellina along the road SS404.
The road ends at "Bagni del Masino", wherefrom a good path leads to the Rifugio Omio.

From Valtellina:
There is also the chance to reach the Val dei Ratti, so the south side of
Pizzo Ligoncio, directly from the Valtellina.
From the village of Dazio, just a little above Morbegno, two paths enter the Val dei Ratti through the Passo del Colino (2636m) and the Passo Primalpia (2476m).
The best accomodation for the long approach is the very confortable Bivouac Primalpia. 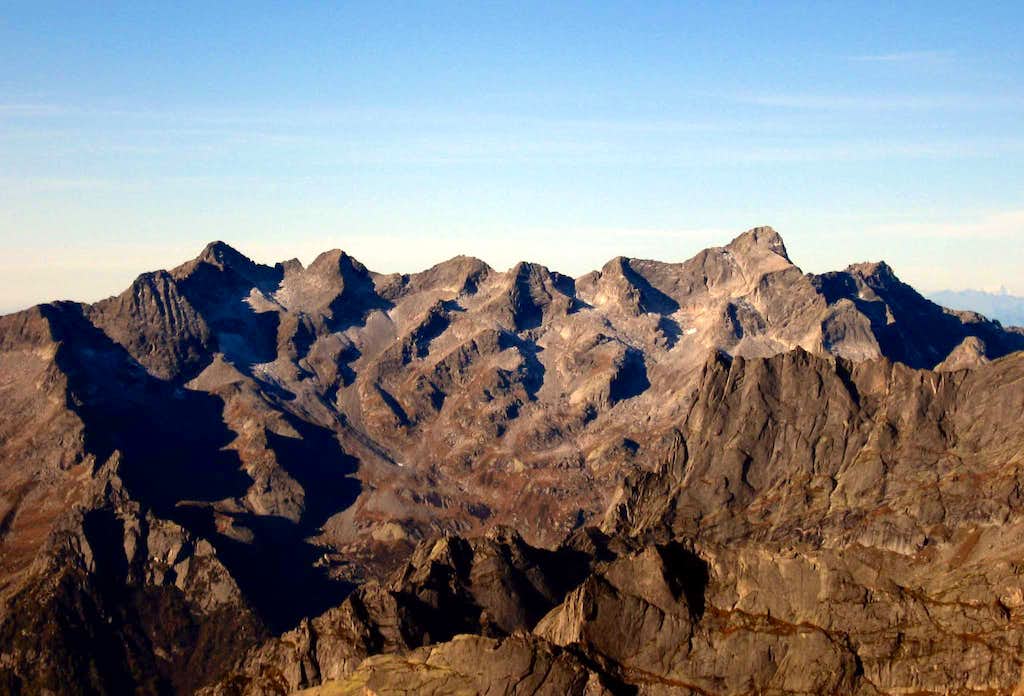